Against Samoa, Boks did it the skop, skiet en donner way – not pretty, but effective 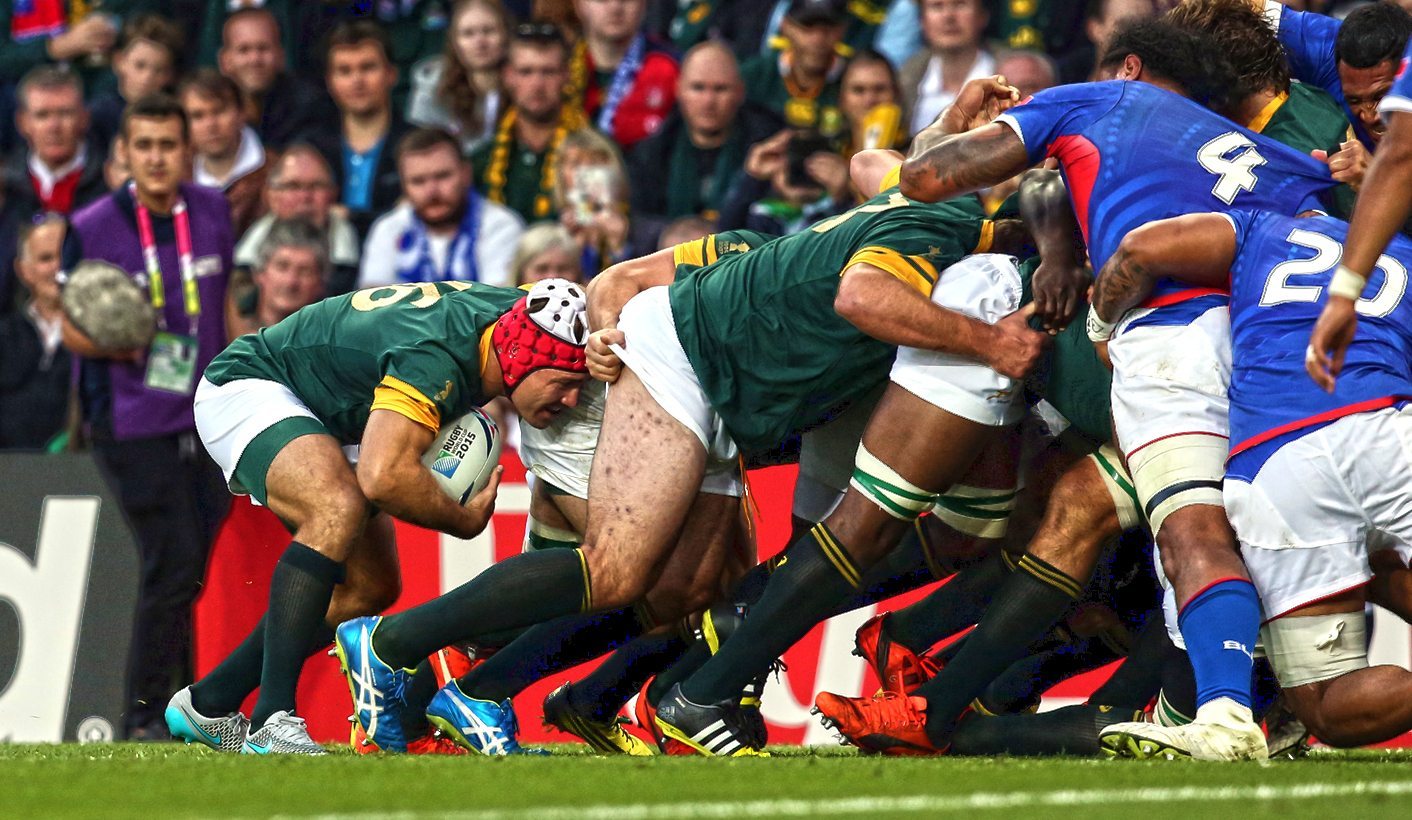 The Springboks bounced back from their embarrassing defeat against Japan last weekend with a physically dominant win over Samoa. Rolling mauls might not be everyone’s cup of tea and certainly isn’t going to work against every team, but it has brought the Boks some solace, for now. By ANTOINETTE MULLER.

Here’s the thing about the Springboks: on a day they play well, even with their golden oldies in tow, they play really well. Their 46-6 thumping of Samoa at Villa Park on Saturday night saw the Boks dominate all the stats. More possession, more territory covered, fewer tackles missed and more meters carried.

Cynics will caution that one swallow does not make a summer. That is true, of course, but considering the cataclysmic response to the embarrassing loss against Japan, it is only fair that the response to such a massive victory is equally emphatic.

That is not to deny that the Boks still have problems. They might have won, but the brand of rugby they play is still decidedly boring and outdated. But boring can be effective and it can provide brief moments of magic, like the hat-trick scored by JP Pietersen. While Pietersen provided the end result, the cogs in the midfield turned well to do all the hard work. It’s not going to revolutionise the way rugby is viewed and suddenly see everyone opt for the “skop, skiet en donner” approach, but for now, it’ll do.

Fourie du Preez, who returned to action for the first time since February, was one of the key players. Eben Etzebeth and Scalk Burger were both immense. Jean de Villiers, who said earlier in the week that he expected to be dropped, was equally solid. It was the kind of performance you would expect from a team that went into the tournament as one of the favourites. For coach Heyeneke Meyer, it came as a massive relief.

“It’s probably been the toughest year of my career,” he said. “It started right before the first game and hasn’t stopped yet. But we’re already focused on the Scotland game. There’s no time to enjoy this one, although the players probably will. We have to bring the same intensity and desire to play for our country. There are not a lot of people who backed us, but it was amazing to leave the hotel and see that there were still people believing in us. I had tears in my eyes as we drove in here. But we have to keep our feet on the ground.”

Most encouragingly for the Boks, perhaps, was that they played with full intensity for the full 80 minutes. During their disastrous Rugby Championship campaign, they often started well and fell away, even when they weren’t being pushed by the opposition. While South Africa’s attacking prowess – six tries in total – offered encouragement, it’s not what Meyer thought was the most positive.

“Attack puts bums on seats, but defence wins trophies. Last week motivated me to be true to myself. To not give away tries shows us that this was World Cup rugby. You look at the finals, it’s all about defence and playing the right game plan.”

A physical game was always expected against a team like Samoa. For Meyer, the best response to physicality was to be even more physical.

“One of the pleasing things for me is to see a green pack of forwards going forward. I told players that people don’t respect our forwards any more. At one stage Jean was off, Jesse [Kriel] was on, Victor was off, Patrick [Lambie] was at 10, Handré [Pollard] was at 12, but we still kept them out. Guys have to put their bodies on line to show what it means to play for your country. So, the maul and the defence – that was what was more pleasing for me.”

But this physicality came at a cost. A number of players, including De Villiers and Etzebeth were sent for X-Rays after the game. Centres Damian de Allende and Jesse Kriel had to be taken off, too, and looked heavily bruised at the end of the match. Jean de Villiers has been ruled out with a broken jaw and will be replaced by Jan Serfontein. De Villiers has to be the unluckiest man in the world when it comes to picking up injuries during Rugby World Cups.

While the physical approach might have vindicated Meyer, he would do well to remember that Japan overcame the Boks with skill. As the tournament progresses, his charges will have to respond to other teams who play skilful rugby if they hope to go all the way to final. DM

Photo: South Africa’s Schalk Brits has the ball as the pack drive over for a try against Samoa’s during the Rugby World Cup 2015 Pool B match South Africa vs Samoa in Villa Park in Birmingham, Britain, 26 September 2015. EPA/DAVID JONES