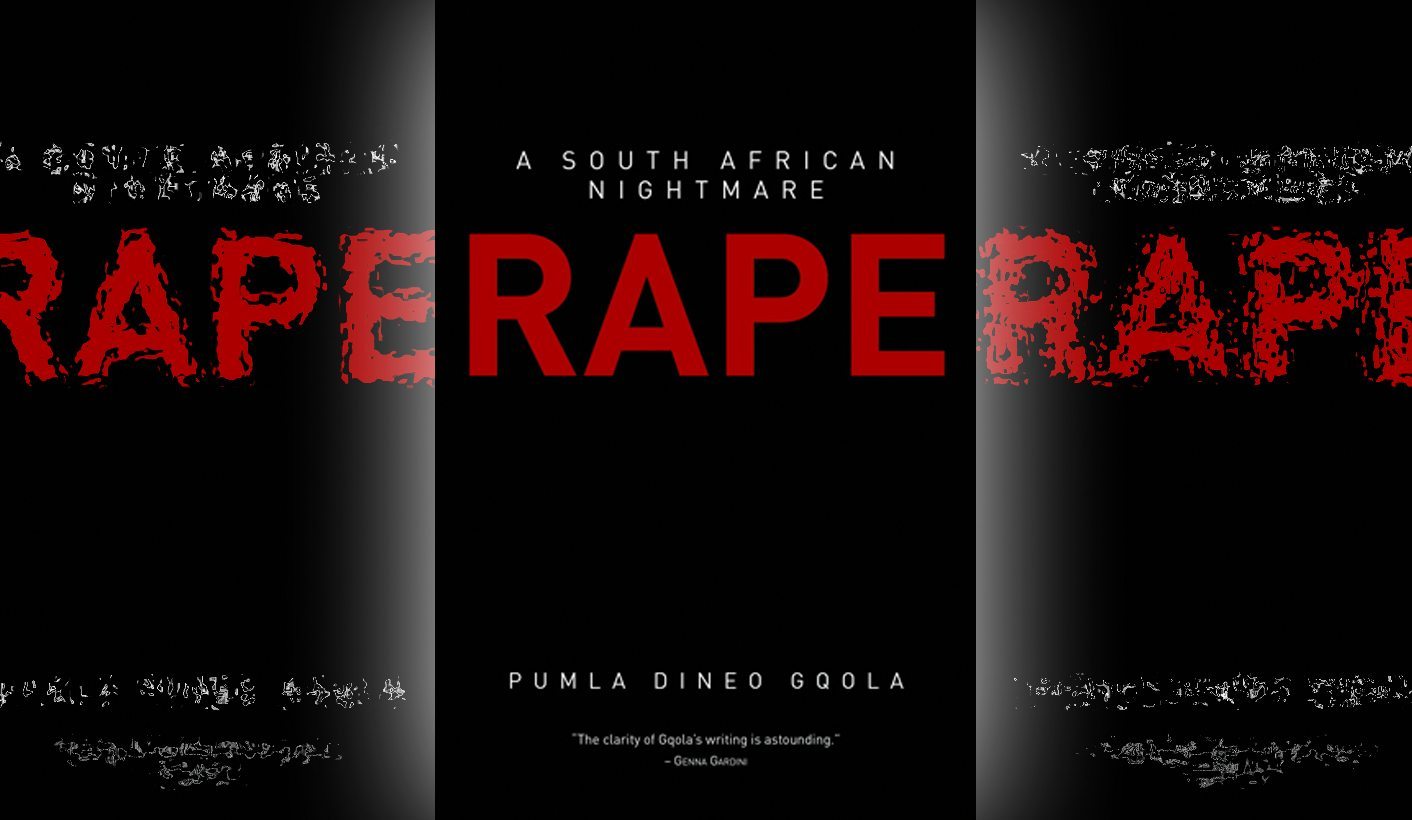 The question of why South Africa has such a high rape rate is one that continues to be deeply troubling. It’s just one of the issues tackled by academic Pumla Dineo Gqola in her brilliant and distressing new book Rape: A South African Nightmare. By REBECCA DAVIS.

“I do not remember how old I was when I first became aware of rape as a thing in the world,” writes University of the Witwatersrand associated professor Pumla Dineo Gqola. Most South Africans likely learn about rape, or the threat of rape when they are very young – even if that’s not what they might term it. The prevalence of rape is one of the most alarming elements of South African society: a “nightmare”, as Gqola terms it in her new book’s title.

The notion that rape in South Africa is a specifically post-apartheid problem is deftly dismantled by Gqola. It is natural that rape charge statistics would rise after 1994, she writes, because black women felt more likely to be believed: previously, police stations had been deeply unfriendly places.

“If we are at all serious about making sense of rape’s hold on our society, we need to interrogate the histories of rape in South Africa,” Gqola writes.

She points to the rape and forced impregnation of slave women in Cape society; the fact that rape was a core feature of colonial rule; and that British soldiers at war with the Xhosa are recorded as having committed rape. Under apartheid, no white men were hanged for rape. The only black men who were hanged for rape were convicted of raping white women.

South Africa’s history of violence and dispossession has bred a kind of toxic masculinity which flourishes at both ends of the political spectrum. “Under colonialism and apartheid, adult Africans were designated boys and girls, legally and economically infantilised,” Gqola writes. Asserting masculinity could provide a way of rejecting that position. Both the left and the right in South Africa are prone to hypermasculinity, from the Struggle hero to the gun-toting Afrikaner: rape was perpetrated both by apartheid agents and liberation figures. To this we can add the fact that nation-building narratives, so favoured by South Africa’s post-apartheid governments, tend to be masculinist in nature the world over.

Gqola’s book takes on a number of widespread perceptions about rape, and makes it clear that the problem is a complex one. For example: in the 1980s, it was not uncommon for young black women to be abducted and raped by gangs, which Gqola notes is a complicating factor for the conventional wisdom that most sexual violence is perpetrated by men who know their victims.

The phenomenon of baby rape, Gqola writes, is a rebuke both to those who insist that rape is about sex, and to those who maintain that rape survivors ‘invite’ rape in some manner, such as through their manner of dress. She cites research showing that child rapists have backgrounds involving abuse and sexual violence – but then points to cases like that of tennis professional Bob Hewitt, who was convicted of raping two former students. “Child rapists are not monsters, nor are they all necessarily young men from impoverished backgrounds,” she writes. There is no significant difference in profile between rapists who rape adults and those who rape children.

“I cannot accept the lie that poverty makes it more likely for men to rape,” Gqola writes, and her book profiles a number of cases involving wealthy (or relatively well-off) men accused of rape. The manner in which beliefs about rape intersect with racism in South Africa is artfully unpacked by Gqola. In the case of cricketer Makhaya Ntini, who was convicted of rape but successfully appealed, opponents of transformation in sport gleefully leapt upon the case. In all such matters, the focus is invariably on the man accused of rape rather than the woman who says she has been raped.

What Gqola calls the “female fear factory” keeps women silent and biddable. When women confront men who are harassing them in public, often sheer surprise stops the harasser in his tracks. But this requires the woman in question not to be afraid, or to act in spite of her fear.

Crimes like the rape and murder of Anene Booysen communicate a particular message to women: don’t go out at night, don’t go into bars, or that too could happen to you. “Even sports stars are unsafe when they are women,” Gqola writes, referring to the gang-rape and murder of Banyana Banyana midfielder Eudy Simelane.

Government gender initiatives in South Africa are the equivalent of putting lipstick on a pig, she suggests: “This talk of ‘the empowerment of women’, as currently employed and aired in South Africa, rests on the assumption that ensuring that some women have access to wealth, positions in government and corporate office, is enough gender-progressive work for our society.”

It proposes, she notes, that the public space is the only place in which women need to be empowered – ignoring domestic contexts. It does nothing to address the problem of violent masculinities. We need to talk to young boys, Gqola counsels, and pay close attention to the lessons they are absorbing about what a man is and what a woman is.

At the heart of Gqola’s book is the 2006 rape trial of Jacob Zuma, which she returns to repeatedly as emblematic of South Africa’s gender problems in a number of different respects. She described the trial as “a watershed moment for what it highlighted about societal attitudes that had previously been slightly out of view”.

Zuma’s rape charge was laid by a woman known as Khwezi: “A well-known HIV-positive activist, lesbian daughter of Zuma’s late comrade”. Khwezi was forced to leave the country in the wake of the trial due to the backlash against her. Gqola notes that only one book currently exists on the trial, and that she knows of two manuscripts whose publication has been “thwarted”.

Some aspects of Zuma’s trial were deeply typical; others less so due to the high profile of the accused. In the latter category: the swiftness of its resolution; the placement of the rape accuser in witness protection; and the diligent collection of DNA evidence.

More characteristic of South African rape trials was the fact that media overwhelmingly placed the focus of their attention on Zuma rather than the experience of his accuser. Within the trial, Gqola lists troubling elements, such as “the way (Khwezi) spoke about her identity as lesbian, which was dismissed and replaced by another marker of identity as bisexual”. Khwezi’s previous sexual history was also admitted into evidence to frame her as someone whom it would be impossible to rape – a category, Gqola notes earlier in the book, which includes sex workers, wives, slave women and men.

Gqola understandably cannot reach any definitive conclusions about the origins or current causes of South Africa’s rape crisis, but she compellingly details the social conditions which normalise and excuse it. Her book is written with enviable clarity. Academics addressing a wider audience than normal often tend to carry ponderous academic style and jargon along with them; not so in Gqola’s case.