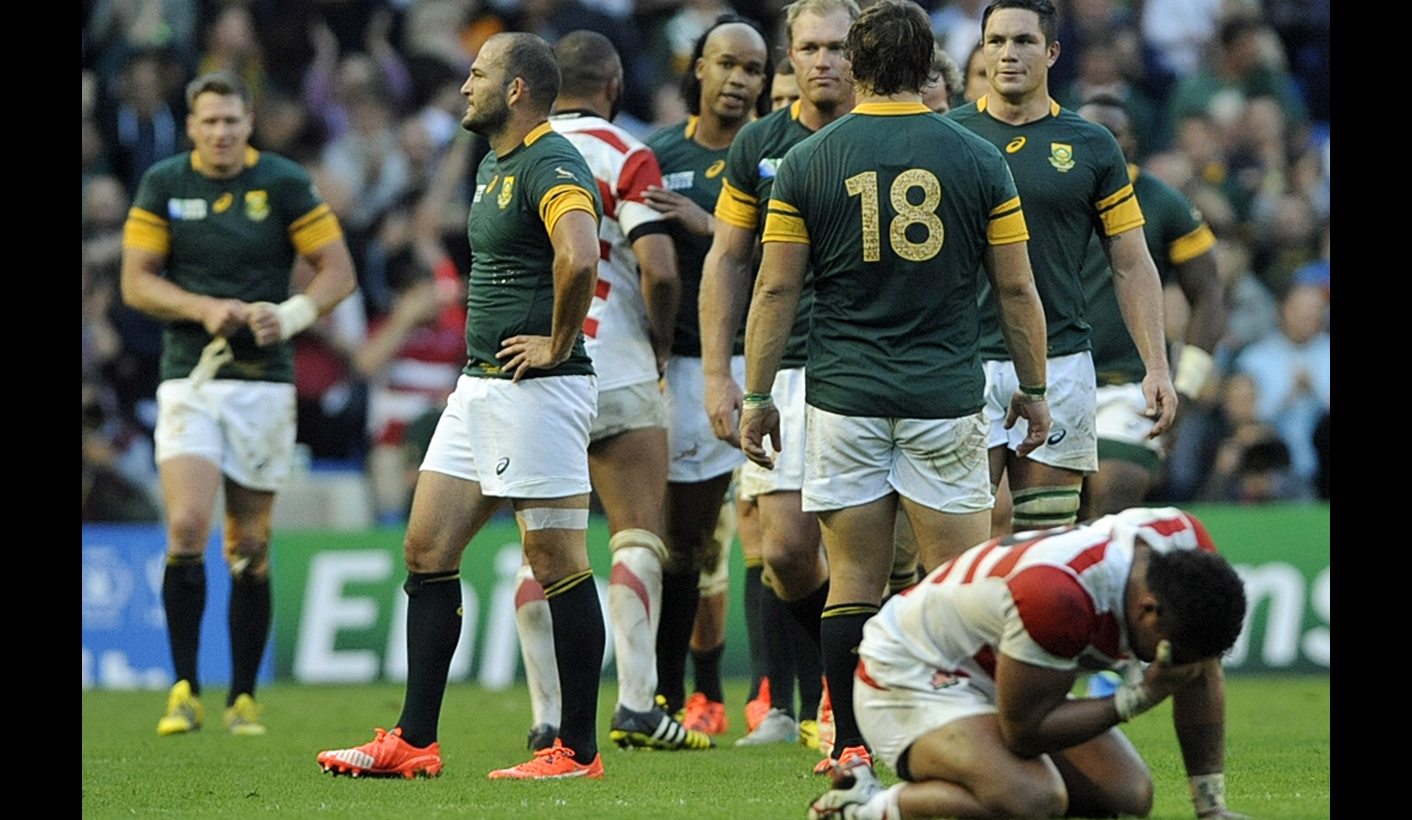 The Springboks were rocked by Japan on Saturday night, going down 34-32 in what is surely the biggest upset in the history of the tournament. By Lloyd Burnard for NEWS24.

The Boks scored four tries to Japan’s three, but at no point were they in control as the ‘Brave Blossoms’ tackled for their lives and on their way to a win that will be remembered by rugby lovers forever.

Anyone who thought that the Boks were in for an easy tournament opener would have come crashing back down to earth in the opening 15 minutes.

The Japanese were full of energy and were making their tackles while the Boks looked flat.

Fullback Ayumu Goromaru had given his side the lead with a penalty, but the men in green and gold were on the board in the 18th minute when Francois Louw finished off a dominant Bok rolling maul. Pat Lambie made no mistake with the conversion, and the Boks were 7-3 up.

It appeared then that the Boks would begin to flex their muscles, but a frustrating period of 10 minutes followed before Japan hit back … this time in the form of a try. Captain Michael Leitch scored after Japan had beaten the Boks at their own game by implementing a rolling maul.

Down 10-7, the Boks hit back almost immediately. It was the forwards once more, with Bismarck du Plessis this time rounding off yet another rolling maul.

There was a roar of applause for the Japanese at half time, when they ran off the field just 12-10 down against the third ranked side in the world.

Japan took the lead again through a Goromaru penalty, but again the Boks hit back.

This time it was through the towering Lood de Jager, who broke through a double tackle to gallop towards the line where he dotted down to allow Lambie to make it 19-13.

Japan closed the gap to 19-16 soon after, and when another Goromaru penalty made it 19-19 on 53 minutes, Bok fans would have started to worry.

Lambie kicked a penalty to restore the lead, but Goromaru hit right back with one of his own to make it 22-22.

By this stage Bok coach Heyneke Meyer had replaced Lambie and Ruan Pienaar with Handre Pollard and Fourie du Preez and he had also made some changes to his pack.

One of those replacements was hooker Adriaan Strauss, who took a pass from Du Preez at pace to barge through the Japanese defence to score his side’s bonus point try in the 62nd minute.

Pollard added the two to give the Boks a 29-22 lead, but Japan weren’t done yet.

A try from Goromaru, who then kicked the conversion from the right, after a beautifully worked backline move made it 29-29 with 10 minutes to play, and the possibility of an upset could not be more real.

A Pollard break resulted in a Bok penalty in front of the posts, and when the decision was taken to kick the three points it was clear for all to see how far the Japanese had stretched the Boks.

But Japan finished strongest – a period of unrelenting period resulting in Coenie Oosthuizen being sin binned as Japan had a penalty five metres out. Much to the appreciation of the crowd, they opted for a lineout and the win when a kick at goal would have earned them a draw.

A rolling maul was held up, and from the resulting scrum they won another penalty.

Again Japan turned down the three points – this time opting for a scrum as they insisted on going for broke.

When Karne Hesketh slid over in the 85th minute, the Boks were stunned as the reality of what had just happened began to set in. DM