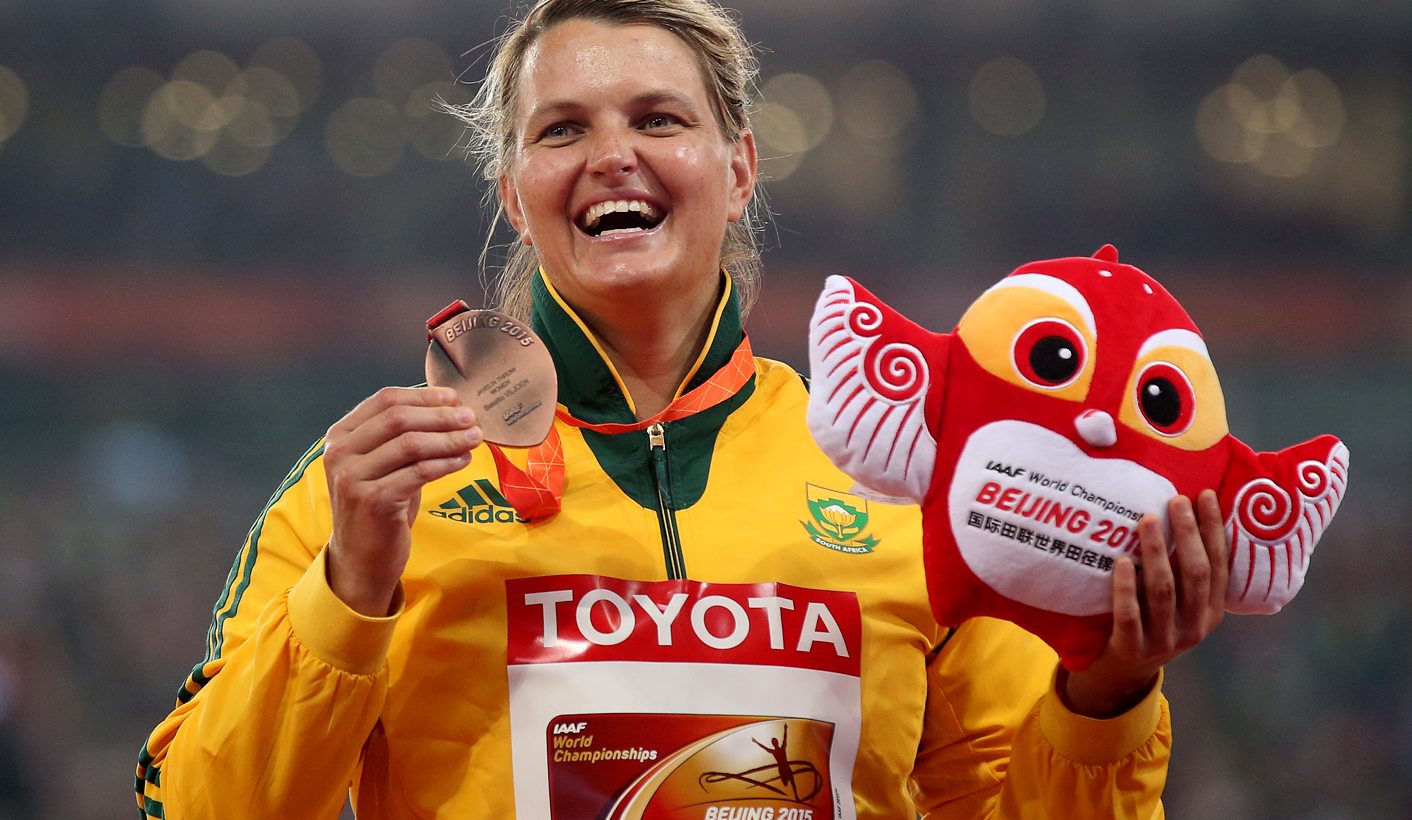 Sunette Viljoen, the South African javelin thrower who recently won a bronze medal at the International Association of Athletics Federations World Athletics Championship, has spoken out about how the South African Sports Confederation and Olympic Committee treats the athletes who are part of their Operation Excellence programme. One can only hope that she will be the first of many. By ANTOINETTE MULLER.

Here’s the thing about being a professional sportsperson: it’s not all fun and games. Sure, you get to travel the world and play for your country, but it comes with a myriad of caveats. These caveats can range from how you are expected to behave by the public to what you are allowed to say in press conferences. Cricketers, for example, can’t criticise umpires without evoking a storm of wrist slapping.

South African athletes, it turns out, can’t speak their minds about the way the South African Sports Confederation and Olympic Committee (Sascoc) treats them. Sunette Viljoen, a bronze medallist at the recent World Athletics championships, found this out the hard way recently. Vijoen penned a blunt column in Rapport calling out Sascoc for the way they treat the athletes who form part of their Operation Excellence (Opex) programme.

Operation Excellence is a not worth its title as there is very little excellence about it. To be an Opex athlete requires top performances time and time again. Failure means getting booted, but even being on that list means little in terms of what the athletes get back. The athletes who rely on the Opex programme have to wait weeks before even their most basic costs are covered. There isn’t even a stipend for nutrition, one of the most important parts of being an elite athlete. Nor is there assistance for big medical expenses, should athletes no longer have funds available from their medical aid.

As Viljoen says, there is not a single athlete in the world who’ll put their body and income at risk for a few thousand rands a month. It is simply not worth the effort. Viljoen claims that, despite her achievement, her employers (Sascoc) have not uttered a single word of encouragement or congratulations to her.

Since writing her column, Sascoc have responded and have ‘red-flagged’ Viljoen for speaking out. CEO Tubby Reddy called Viljoen “ungrateful” in an interview with The Citizen and threatened that her contract could be terminated since she had disregarded the “rules” of her contract.

Silencing athletes about their concerns or reprimanding them for overstepping is nothing new, but this takes things to the next level. That Viljoen – and the rest – are not allowed to voice their concerns about Sascoc publicly is abhorrent. The secrecy in which Sascoc tries to shroud their Opex programme shows that there is something seriously wrong with the way Reddy and the rest of the fat cats at Sascoc run the organisation. It shows that Sascoc is nothing more than a bunch of navel-gazing bullies whose only real interest is themselves and hogging the glory of South African athletes who put their blood, sweat, tears and sometimes life savings into their careers.

One of the biggest problems with the Opex programme is that Sascoc only starts supporting athletes once they have achieved some sort of success. And as VIljoen points out – if you slip up, you’re out.

Of course these are tough economic times, but that Sascoc have the audacity to call athletes ungrateful when they are riding their coattails of success is an insult to the hard work these athletes put in. While Sascoc has had some funding troubles, they only have themselves to blame. Corporations are not going to get involved with an organisation with a tainted reputation.

What Viljoen has done is extraordinary for many reasons. Firstly, she most likely knew what the consequences would be for speaking out. Yet, she still did it, selflessly putting her income at risk, the very income that allows her to compete internationally and which will allow her to take part in the Rio Olympics. This is not the action of an athlete being untruthful, simply the action of somebody who is clearly frustrated. Viljoen insists that she did what she did to help other athletes. Considering her contract is now on the line, it’s hard not to believe her.

More importantly, perhaps now that one athlete has blown the lid off the disaster more will feel comfortable in speaking out. The more players speak up, the better the chances are of a forensic audit of Sascoc and the way they spend the National Lottery Board money they receive. When that happens, perhaps South Africa can finally start achieving the glory of which the country’s wealth of talent is capable. DM

Photo: South Africa’s Sunette Viljoen poses with her bronze medal on the podium of the women’s Javelin Throw final during the Beijing 2015 IAAF World Championships at the National Stadium, also known as Bird’s Nest, in Beijing, China, 30 August 2015. EPA/WU HONG