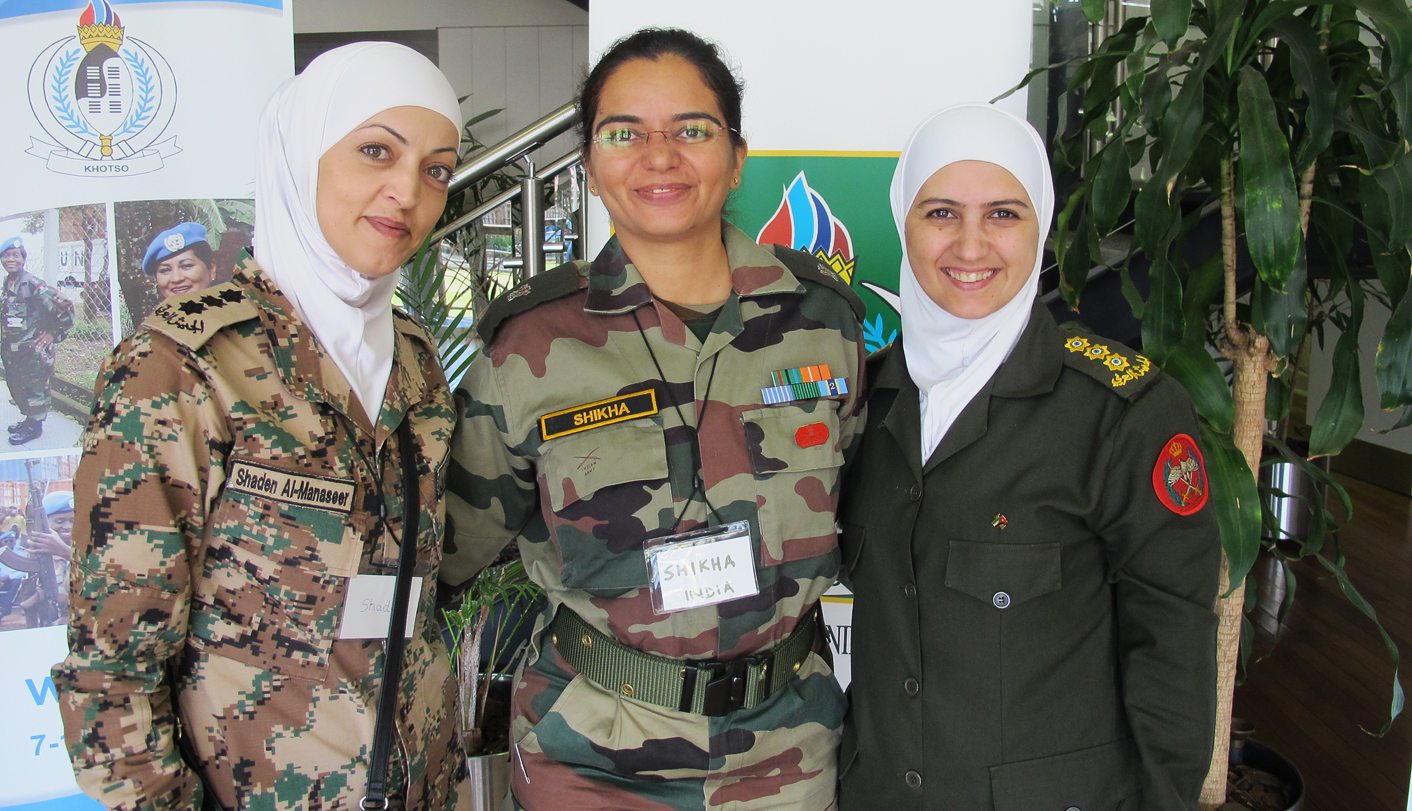 There are nowhere near enough female peacekeepers serving in United Nations peacekeeping missions. Obviously, this is a problem, but it’s not just about representation. It’s also because female peacekeepers are often more effective than their male counterparts. By SIMON ALLISON.

The South African Army College is a neat collection of elegant colonial buildings and vast parade grounds, nestled in the heart of the Thaba Tshwane military base on the outskirts of Pretoria. With its manicured lawns and evident love of uniforms, it is reminiscent of one of those posh private boys’ schools – think Hilton College with a little more camouflage, and a lot more transformation.

Transformation in the South African National Defence Force (SANDF) has not been just about race, but about gender too. The SANDF has a relatively good track record when it comes to integrating women into service, although there’s still plenty of work to be done.

This is particularly evident when it comes to peacekeeping. The percentage of females in South Africa’s troop contributions to United Nations (UN) missions in the Democratic Republic of Congo, South Sudan and Sudan (15%) are substantially higher than the global average (4%).

This context makes the army college a natural venue for a pilot training programme for female peacekeepers. Run by UN Women, the two-week training is designed to prepare female officers for placement in UN peacekeeping missions. At officer level, the UN has a particularly poor record: there are just 69 women placed as military experts in its 16 missions.

To fix this imbalance, UN Women has gathered 40 female officers from all around the world, and is putting them through an intense programme of lectures and role-playing scenarios. Most of the participants either have been or will be deployed on a UN mission. The Daily Maverick dropped by for a day of training to meet some extraordinary soldiers – and to hear them explain why female peacekeepers in war zones are often more effective than their male counterparts.

Lieutenant-Colonel Irena Dzisiewska, from the British army, is off to the UN mission in Mali within the month. She’s got plenty of experience, having done tours in the Balkans and Afghanistan, and what these have taught her is that women can bring a different perspective to peacekeeping. “For a lot of women, or even men, who have suffered sexual violence, history has shown us they only want to speak to women.”

This was a constant theme. Captain Shaden Ata Mohammed Elmanaseer, a Jordanian medic who has served in Gaza, Libya and Liberia, agrees. “When a female talks to another female, when they come to hospital, they feel more comfortable, especially if there is a gynaecological problem.” Elmanaseer became her country’s first female officer deployed to the UN when she joined the UN Mission in Liberia in Liberia in 2010, paving the way for others to follow – a trail-blazing accomplishment in a deeply conservative country.

Major Shikha Mahrotra, an Indian officer with the UN Organisation Stabilisation Mission in the Democratic Republic of the Congo (Monusco), said the difference lies in emotional intelligence and empathy – traits which don’t always come naturally to her male counterparts. Or, at least, civilian populations don’t expect empathy from males. “I feel as a woman peacekeeper we can do a lot, especially if we go patrolling, if we are in the field. If we are involved in that it makes a lot of difference. Women, children, the elderly – they will talk to us. With women they can open up easily. And being a women you can hear what they say, but also understand what they are not saying, which is sometimes more important.”

Like most armies, the Indian Armed Forces does not allow its female soldiers to participate in combat situations. Mahrotra is adamant that this should change. “It’s a psychological thing. In my country men think that women should be protected. But I’ve taken the same training as men, and I am just as prepared.”

Felicia Maganwe, a lieutenant colonel in SANDF, has an astonishing story to tell – one that reveals how this gender difference works in the field. She was the company commander with a South African contingent with Monusco, one of a very select number of females in such a senior position. “When I arrived, it took me a day to adjust. The second day I started setting up my base … The (rebel leader) said ‘Ag, but you’re a woman!’. He was surprised.”

Later in her tour, one of her mobile operating bases was caught in dangerous crossfire between two rebel groups, and was being overrun by civilians seeking shelter. Maganwe took action: she phoned the rebel leader – who was no longer surprised by her gender – and demanded that he move the combat elsewhere. “It was easier because I was a women,” she said. The rebels did not feel threatened by her, and were thus more willing to negotiate with her. Instead of raising tensions, she defused them – and the rebels complied with her demands. For her work in the Congo, Maganwe received a commendation as the best company commander on her mission.

Nozipho January-Bardill, a South African special adviser to UN Women, outlined three areas in which women peacekeepers are more effective than men. First, they are less aggressive. “Women prefer for people not to be killed. If there’s a choice, women opt for life,” she said. She doesn’t say it but her implication is clear: men don’t always choose life.

Second, women tend to have a better approach to dealing with conflicting parties. “They seem to be more effective in communicating and persuading. This has been tried and tested in the field.”

Third, when it comes to violence against women, female peacekeepers are better-placed to deal with victims, who implicitly trust women more – because it is almost always men who perpetrated the violence.

All of which raises an obvious question: would peacekeeping missions be more effective if the gender imbalance was reversed, if there were more female peacekeepers than male?

January-Bardill contemplates this for a little while. “I think at certain levels women would be more effective. But women may struggle with real combat, with pulling the trigger. I don’t want to generalise, or speak on behalf of women. There are jobs that women can do where they can be effective, but not necessarily the aggressive part. There are some instances where the gender difference is a real factor. It’s about getting the balance right.”

John Stupart, editor of the African Defence Review, isn’t convinced. “Female peacekeepers can and do contribute in unique ways in many conflicts worldwide, but to say that they act as a universal tonic by virtue of their gender is untrue. Implying that they are better in all these aspects in the DRC (Congo), Darfur and any other peacekeeping deployment where we may send soldiers is too large of a generalisation. I highly doubt that a female peacekeeper is going to be equally beneficial in Darfur as in the DRC, as in any other vastly different anthropological context. It’s precisely this kind of cultural chauvinism that actually needs to be un-taught in order to make accurate, intelligent decisions when deploying female peacekeeping officers on a patrol or a particular mission,” he said. DM