The culling of the trolls: News24 shuts down online com...

The culling of the trolls: News24 shuts down online comments section 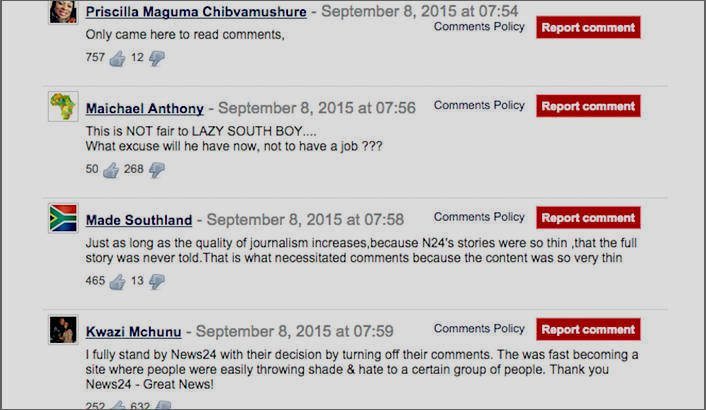 On Tuesday, South Africa’s largest online news publisher announced that it has decided to stop allowing readers to post comments on most articles. The move is in line with what is increasingly considered international best practice: a default setting of no online comments. Critics are seeing it as yet another assault on free speech, while supporters are hailing the decision as long overdue. By REBECCA DAVIS.

From Friday, News24 will no longer permit readers to post comments on its articles. The digital publisher, which attracts the lion’s share of South African online traffic for news, announced the decision in a column by News24 editor-in-chief Andrew Trench.

“Many commentators insist on pushing the boundaries of free speech available to us in South Africa,” Trench wrote. “Comments tediously drift towards hate speech at worst and, at best, are often laced with prejudice. Interesting and considered contributions are drowned out by a cacophony of insults from a minority of users.”

News24 has been infamous for some time for the quantity of hateful comments its articles attract. Trench says they’ve had enough: “We have decided that we wish to be known for the quality of our content rather than for our comments.”

Trench suggested that social media platforms “increasingly are the more comfortable home of online conversations”, but stressed that readers would still be able to make contributions to debates through the MyNews24 blogging platform.

Inevitably, the announcement has already polarized opinion, with some perceiving it as part of a sinister slide towards a public discourse where only certain opinions are judged ‘correct’ enough to be aired.

“News24 are not curtailing free speech, but rather choosing which voices and ideas to host and thereby amplify, just as they do when deciding which features to publish,” he told the Daily Maverick on Tuesday.

“The right to free expression doesn’t incur obligations on others to provide you with any specific platform to speak from. For as long as you can make your point on your own blog, Facebook, Twitter or wherever, your rights are not being violated.”

As Trench points out, News24 is following in the footsteps of a growing number of prestigious international publishers which have disabled comments after coming to the conclusion that the negative effects outweighed the positive.

Perhaps most famously, the Popular Science website announced in 2013 that it was doing away with a comment section following research which found that comments could affect the reader’s comprehension of the story. When it came to topics on which scientific consensus had been achieved, such as evolution, Popular Science decided it could no longer tolerate hosting debate via the comments section as if such matters were legitimately open to question.

“The cynical work of undermining bedrock scientific doctrine is now being done beneath our own stories within a website devoted to championing science,” Suzanne LaBarre, Popular Science’s online content director, wrote at the time.

Over the course of the last eight years or so, the question of how best to manage online comments has been agonised over by digital publishers.

Many websites have experimented with weighting comments according to readers’ votes, whereby certain contributions judged more helpful than others are accorded greater prominence. The Wall Street Journal introduced a feature which would allow readers only to see comments posted by subscribers – “on the theory that the most dedicated readers might make for a more serious conversation”, to quote the New York Times.

At one stage, it seemed as if the key to hosting a more civil online debate might lie in doing away with anonymity among commenters. The Poynter Institute reported in 2011 that the LA Times had compared the results of permitting pseudonyms while posting, and compelling users to log in with their Facebook profiles. The difference in the quality of commenting among the Facebook users was “pretty stunning”, the paper said at the time. Unsurprisingly, knowing that your social network might see what you are posting online appears to improve behaviour.

But not invariably. A 2013 Bloomberg article cites the fact that in 2007, South Korea required verified identities for all users of sites with more than 100,000 visitors. Four years later, the programme was scrapped because the requirement to use real identities only reduced the number of nasty comments by 0,09%.

News24 mandated using Facebook profiles for comments in 2012, but it clearly hasn’t been enough to stem the tide of incivility on its platform.

Hiring people to moderate comments is another potential solution: Huffington Post, which receives millions of comments daily, employs more than 40 moderators. This requires the kind of resources that strained South African news organisations usually lack, however. News24 has a community manager and a small team monitoring comments, but given that the site attracts around 5,000 comments a day, their task is not small.

“The volume and demands on our team are immense,” Trench told the Daily Maverick. “I think they can be better utilised producing interesting journalism.”

If news sites don’t moderate comments, they open themselves up to potentially serious legal trouble. Afrikaans singer Sunette Bridges got a small taste of this earlier this year. The South African Human Rights Commission (SAHRC) took Bridges to the Equality Court over racist comments posted on her Facebook wall by others. By not removing the comments, the SAHRC argued that Bridges effectively condoned racism and created a platform for such conversations.

Why do online comments so frequently seem to tend towards the hateful or aggressive? A 2012 Scientific American article suggested that a “perfect storm of factors” contribute.

Where anonymity is allowed, that plays a role; the distance between the commenter and the anger breeds a more brazen antagonism; and it’s easier to be nasty in writing than in speech. Additionally, you’re rarely offered an opportunity to speak at length verbally, whereas you can write extremely lengthy expositions of your view online, entrenching extreme viewpoints.

News24’s decision will doubtless cause some soul-searching in other South African newsrooms as to whether continuing to host comments is more trouble than it’s worth. Daily Maverick CEO Styli Charalambous says the matter is certainly not set in stone.

“At this point (at Daily Maverick) we don’t want to shut down comments to crack down on a few trolls who spoil the party for others,” Charalambous says.

“Comments are important, and help build a community around a brand. But if they degenerate to a level where hate speech and vitriol outnumber the good comments, you need to adopt new measures. What those measures are, may be very different from one news publisher to the next.” DM