Lives at risk after snakebite anti-venom proves toxic to profits 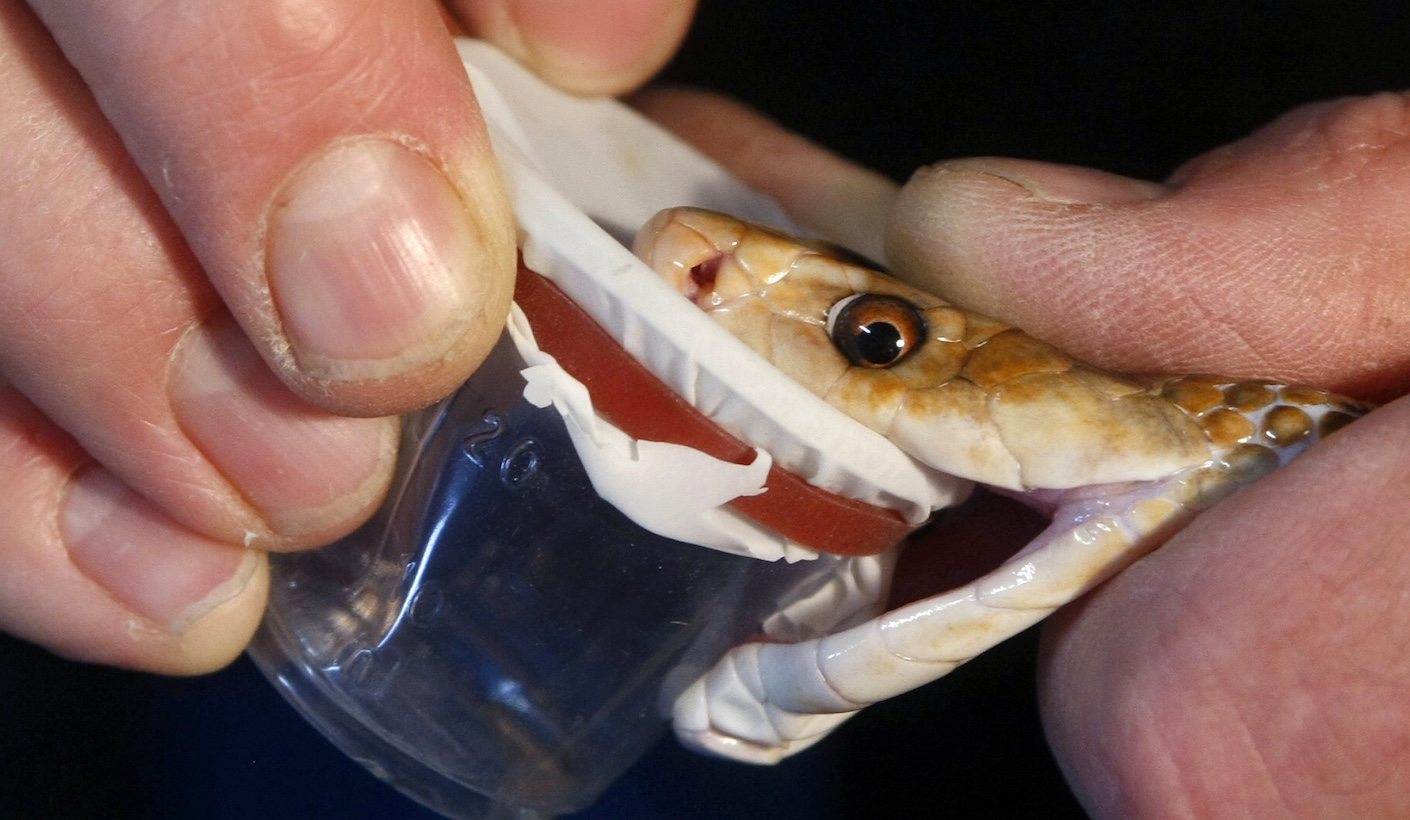 These days, getting bitten by a snake shouldn’t be such a big deal. Scary, sure, and painful, but thanks to increasingly effective anti-venoms, snakebites are rarely life-threatening if you can access drugs in time. So why are 100,000 people dying from snakebites every year, and why is that number set to increase rapidly in Africa in 2016? By SIMON ALLISON.

There’s no easy answer to the first question. People die from snakebites for the same reasons they die from malaria, HIV and tuberculosis: because even though we know how to combat these health crises, a toxic combination of bad governance, a lack of resources, poor health education and a reliance on traditional medicine means that we can’t.

But why is the problem suddenly about to get worse?

“Of the estimated five million people bitten by snakes worldwide each year, 100,000 die, while 400,000 are permanently disabled or disfigured. In sub-Saharan Africa alone, 30,000 people die from snakebites and an estimated 8,000 undergo amputations every year. The number of victims is likely to rise as existing stockpiles of one of the most effective anti-venoms for sub-Saharan Africa is due to expire in June 2016,” Doctors Without Borders (MSF) said in a statement.

“Fav-Afrique, produced by French pharmaceutical company Sanofi, is the only anti-venom that has been proven safe and effective to treat envenoming from different types of snakes across Sub-Saharan Africa,” the medical charity explained. “There are a few alternative similar anti-venom products in Africa, but their effectiveness and safety have not been properly established yet. Sanofi ceased production of Fav-Afrique in 2014 and the last batch will expire in June 2016. No replacement product will be available for at least another two years, translating into more needless death and disability.”

Producing the drug is a complicated process. Snakes must be caught and milked of their venom, which is then injected into horses. The horses produce antibodies, and their antibody-containing plasma is harvested and filtered before being packaged for export. It’s highly technical – and very expensive, working out to $250-$300 a dose.

It was so expensive, in fact, that in 2010 Sanofi Pasteur decided that it was no longer financially viable. In an interview with the Daily Maverick, Sanofi’s vice-president for global immunisation policy, Mike Watson, explained why: “Fav-Afrique is something we’ve made for a long time. Historically it was a product that was sold to individuals. Back in 2006, the World Health Organisation wanted to try to put in place a more structured approach to supply snake anti-venom around the world. We worked very closely with them … We were supplying anti-venoms primarily to big countries and NGOs such as MSF. These products are very labour-intensive, expensive products. In 2010 governments became very focused on price, and started to buy from India for a third of the price.”

Losing its market, Sanofi decided to switch its capacity to the production of rabies immune globulin, for which demand still outstrips supply. “This seemed to work for everybody until research showed the cheaper anti-venom didn’t work as well or in some cases not at all. So that’s the problem. Do we stop saving people’s lives from rabies, so that we can save people’s lives from snakebites? We’re saving as many lives as before, we’re just saving them from rabies,” said Watson.

He added that Sanofi is in the process of selling Fav-Afrique, but that even in the best-case-scenario there is still likely to be a two-year gap in the availability of the drug.

That’s all well and good from the perspective of Sanofi’s shareholders, but it illustrates a few glaring holes in the global public health system. Why has it taken so long for Sanofi to sell on its intellectual property, given that it decided to halt production five years ago? Why did no one anticipate the gap in production? Whose responsibility is it to ensure that someone, somewhere, is producing an anti-venom that works?

Naturally, these questions are asked in the direction of the World Health Organisation, the global body with a mandate to predict and protect against public health crises. Although it has yet to respond directly to the Fav-Afrique expiry issue, it is clearly aware that snakebites are not getting the attention or resources they deserve: “Envenoming following snakebites, is largely a neglected threat of public health. It affects mainly the poor in deprived rural areas where health facilities are limited and anti-venoms may be hard to obtain. Training of health staff in the management of envenoming is often neglected, despite good evidence that it improves outcomes. Concerted action is needed to ensure supplies of effective anti-venoms and to develop systems that deliver good quality healthcare to snake bite victims so that we can deal effectively with this problem, which causes severe disability, brings misery to families and which kills thousands of people,” the WHO said on its website.

Unfortunately, forewarned is not always forearmed. Despite clearly recognising the need for “concerted action to ensure effective supplies of anti-venoms”, one of the world’s most useful anti-venoms will run out in 2016, and won’t be replaced for another two years at least. Many thousands will die or suffer disabilities as a result. DM

Photo: A Coastal Taipan is milked for its venom (Reuters/Mick Tsikas)