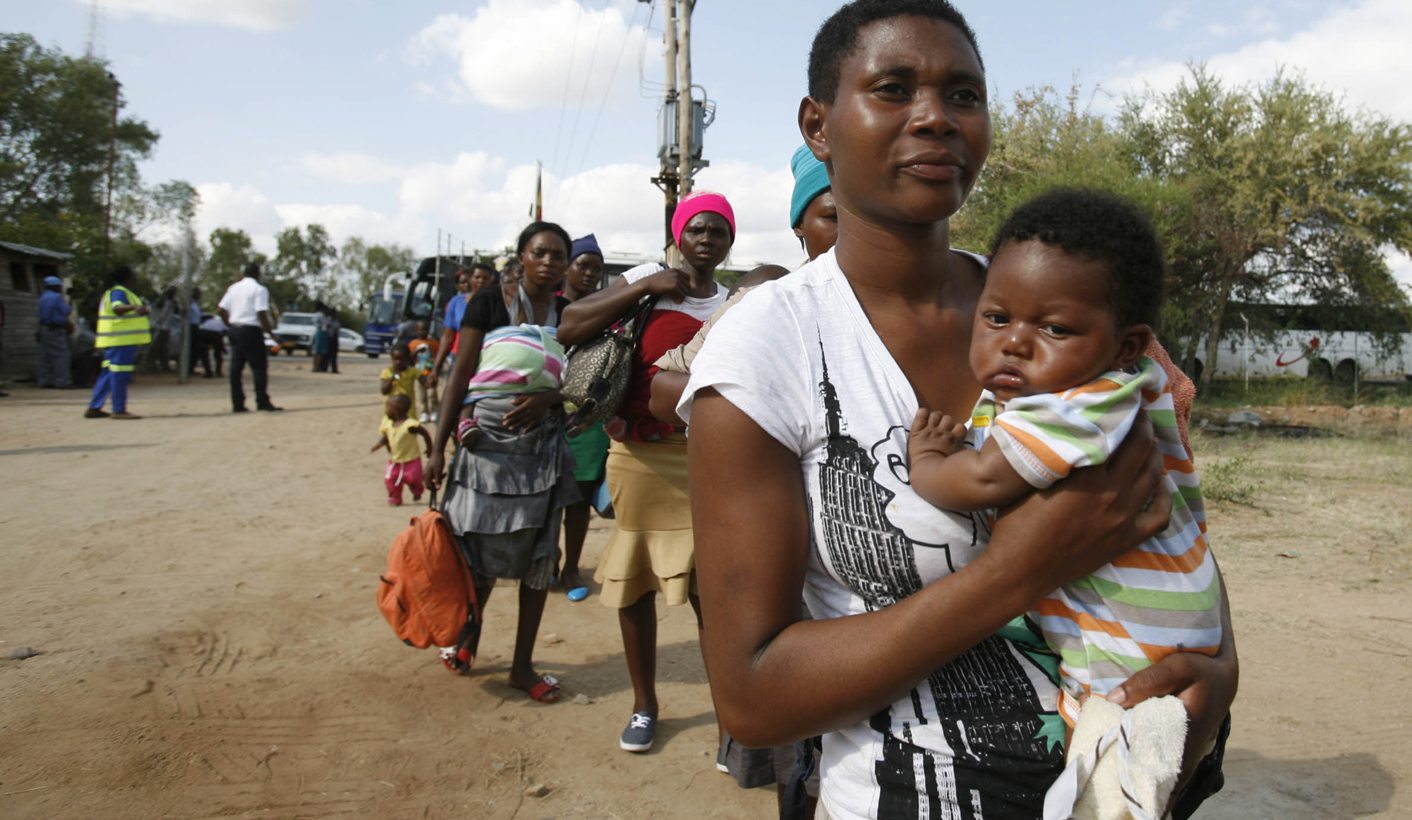 The National Health Act states clearly that all uninsured pregnant and breastfeeding women and children under six get receive free healthcare, regardless of their nationality. But some Gauteng health workers are refusing to implement this, as demonstrated by the recent death of a Zimbabwean woman’s premature baby while nurses allegedly stood by. LAURA LOPEZ GONZALEZ for HEALTH-E NEWS reports on how mothers and babies are the latest victims of South Africa’s clampdown on immigration.

This story was first published by Health-e News.

In August, Eyewitness News reported that a Zimbabwean woman watched her baby die as Rahima Moosa Mother and Child Hospital nurses not only allegedly refused to help her but also called her stupid.

The baby’s death came a month after Health-e News reported that Pholosong Hospital on Johannesburg’s East Rand was allegedly withholding babies from foreign mothers who could not pay R940 for their delivery at the hospital. At Leratong Hospital, one Zimbabwean mother said health workers threatened to have her arrested if she didn’t pay her bill. Leratong Hospital patients also reported that nurses threatened to deny health services to the babies of foreign mothers who could not pay upfront in cash).

But the National Health Act is clear: public health facilities must provide free health services to all uninsured pregnant and breastfeeding women, and children below the age of six years. Until a health minister publishes conditions to the contrary, this applies to all women and children fulfilling these criteria, regardless of nationality.

Like many of South Africa’s national health policies, this policy is progressive and evidence-based. Sierra Leone adopted the policy in 2010. Within a year, the country had seen massive reductions in maternal complications and a 60% decline in maternal mortality, according to the United Nations Children’s Fund.

Incidents at Gauteng hospitals prompted disciplinary action against three Rahima Moosa Hospital nurses, vows to investigate East Rand hospitals and official statements. But official comments betray a dangerous and lingering confusion among officials about national policy. It is a confusion that has filtered down to hospitals and clinics, sabotaging a policy that could save mothers’ lives.

In the wake of the Rahima Moosa Hospital incident, Democratic Alliance shadow health MEC Jack Bloom issued a statement detailing the numbers of foreign mothers who delivered at the hospital last year. Zimbabwean women, followed by those from war-torn Somalia topped the list of mums who were said to comprise about a quarter of births at the hospital.

But foreign women don’t always give birth to “foreign” babies, and the figures make no mention of the nationalities of these babies or their fathers’ nationality. According to the Gauteng health department, it has yet to compile figures on this.

According to Bloom: “The hospital is clearly taking strain with the extra influx of foreigners, some of whom come directly to deliver and then return home.”

When asked how he knew that women from as close as Mozambique and as far away as Pakistan came to Johannesburg specifically to deliver their babies, Bloom admitted evidence was anecdotal.“Anecdotally, there are stories about women coming specifically to give birth, and the department acknowledges this too,” Bloom said.

Jo Veary, a senior researcher at the University of the Witswatersrand’s (Wits’) African Centre for Migration and Society, says there is very little if any research to show that women are flocking to South Africa in numbers to give birth.

“There is this assumption that all non-nationals are travelling to South Africa in order to access public healthcare services. But there is quite a large body of research that has been building over the last few years that indicates people don’t report moving to South Africa to access public healthcare,” said Veary, who also cautioned that figures from the hospital were not widely generalisable.

“Honestly, blaming foreigners for the failure to organise the public health services properly is the worst kind of xenophobia,” said Wits Reproductive Health and HIV Institute deputy director Francois Venter. “I’ve worked in the public sector for over 20 years, and the problems we see are largely due to poor human resource and supply line management, and the disease burden related to local failure of poverty relief programmes and poor organisation of services – not a handful of foreigners who are here for jobs, not for healthcare.”

“There’s all this rhetoric about supposed anecdotal evidence … but how do you prove that?” Veary asked. “We’re not seeing people move for healthcare. If you are a pregnant woman, you don’t have to prove anything.”

In his statement about foreign mothers, Bloom added that while the Gauteng health department stressed that any woman in labour must be admitted to health facilities, it was taking steps to “prevent abuse”, including requiring relevant legal documents from patients.

Sasha Stevenson, an attorney with the public interest law organisation Section27, says confusion over paperwork may be why National Health Act provisions regarding mothers and young children are not being implemented.

“Hospitals need some proof of ID to see a patient and they also need proof of income,” said Stevenson. “There seems to be a failure on the part of people asking for this information to communicate what they need and how it can be provided.

“They ask for an ID book or asylum-seekers/refugee permit sometimes and if the patient can’t provide that document, they are turned away,” she added. “(Patients) aren’t told that they can provide other forms of ID such as a foreign passport or affidavit.”

“Patients then fail to cross the first hurdle,” said Stevenson, who added that some foreign patients are generally not allowed to submit proof of income or substitute declaration of income forms. This means they end up being mistakenly treated as unsubsidised private patients.”

In a written response to questions, Gauteng health department spokesperson Steve Mabona said that when patients’ income and immigration statuses could not be ascertained, they are regarded as full-paying private patients, “which is the case with most ‘undocumented’ foreign nationals”.

Gauteng’s own Patient Classification Manual Policy is very clear. While the manual requires paperwork stating income from all patients, it is clear that uninsured pregnant and breastfeeding women and children below the age of six years are entitled to free health services.

According to Stevenson and Veary, this absolves uninsured pregnant women and breastfeeding mothers and young children from typical means tests used to determine patient co-payments for public health services.

“The care available to pregnant women isn’t just care linked to their pregnancy,” said Stevenson, who explained that if a pregnant woman or new mum broke her leg, this should also be treated free of charge.

The manual also states that documented or undocumented citizens of countries within the Southern African Development Community should be treated like South African citizens.

However, Mabona contradicted the policy in his response and maintained that uninsured pregnant and breastfeeding women and children below the age of six years must undergo means tests.

But he also acknowledged confusion among health workers: “There is great confusion around what services (if any) should be accorded to the ever increasing numbers of undocumented foreign nationals who wish medical attention,” he wrote. “This (has) brought about conflict between reporting them to the police and providing care. This is indeed a difficult choice that our healthcare workers face”.

“There are legal issues at play in that these are actually regarded as illegals – by law – whereas healthcare workers have an obligation of both morality and profession,” he added.

But it should not be up to healthcare workers to make “choices” about who to treat. Doctors and nurses shouldn’t be expected to be immigration officers and the law provides for that.

“The Immigration Act is very clear that someone providing humanitarian assistance to undocumented individuals cannot be liable for prosecution – that includes everyone from the receptionist to the surgeon,” Veary said. “It’s not the obligation of healthcare providers to act as immigration officers.”

She added that much of the confusion is likely to stem from particularly problematic 2013 guidelines, which Veary described as a horrible “cut and paste job” and which contradicts the latest policy.

Stevenson also stressed that healthcare workers needed clear messages:“What is needed is clear communication from the Gauteng and preferably also the national Department of Health about the rights of migrants and what staff members should do when a migrant is seeking care,” she said. “There isn’t that kind of communication and so we continue to see people being turned away.”

The national Department of Health did not reply to requests for comment. DM