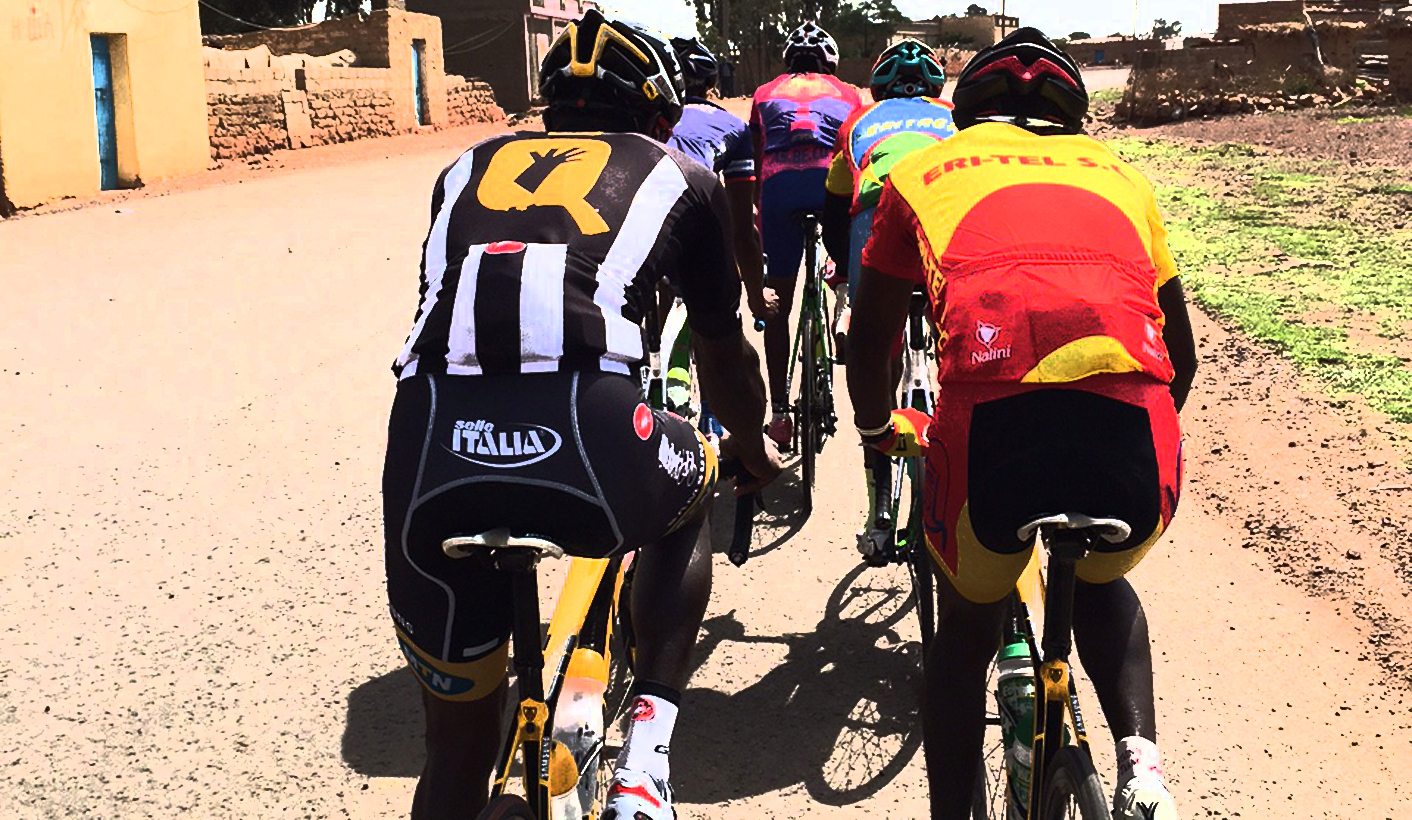 Eritrean cycling finally went global over the course of the 2015 Tour de France, when MTN-Qhubeka’s star climber Daniel Teklehaimanot introduced his obscure, east African country to the world. But Zemede Tekle, Eritrea’s sports commissioner recently told the Daily Maverick: ‘Cycling is life here. It is who we are.’ In 1936, 25 years after Italian colonialists imported the sport (and refused to allow the locals to participate), Eritreans held their first race. They’ve been racing ever since. In Eritrea, as an Italian journalist once noted, cycling is bread. Words and photos by RICHARD POPLAK.

Asmara, a dusty eyrie perched 2,400 metres above sea level. The architecture itself suggests strength, speed. Dubbed ‘Africa’s secret modernist city’, the capital is littered with examples of modernist, rationalist and futurist buildings. Faded but intact, roaring into an imaginary tomorrow without any discernible change, it’s as if the city adheres to FT Marinetti’s Futurist axiom: ‘(W)e cooperate with Mechanics in destroying the old poetry.’ Marinetti used the metaphor of the machine to show that metaphor was a machine—nowhere in the world is there a purer evocation of this outlook.

Asmara sits on a rocky highland plateau that gives way on either side to the western lowlands and the eastern littoral respectively. This has rendered the city relatively inaccessible—perfect during war, less so during peace. More to the point, for the city’s cyclists, it means climbing, and lots of it. This image depicts the town of Nesafit, 25 kilometres below Asmara on the Massawa Road.

There are bicycles everywhere in Asmara. They seem to emanate from the architecture. They seem like Marinetti’s metaphor—somehow, they explain the city.

Bicycles form a vital part of Asmara’s economy. Many work bikes are pedalled by children, one of the slow, creeping indicators that Eritrea has manifold troubles. This is a desperately poor country; everywhere there are remembered traumas from decades of war and deprivation. Bicycles carry that memory too: these workhorses were once warhorses; during the lengthy guerrilla war against the Ethiopians, Eritrean rebels would ride into Asmara and fling grenades at soldiers from their bikes.

This is Giovanni Mazzola, 75, pictured outside the Eritrean Cycling Federation offices. Mazzola’s father was Italian, and his mixed-race upbringing was difficult and poor. With cycling as his outlet, he was one of the local heroes in the 1950s. When Haile Selassie’s Ethiopia cracked down on the Eritrean independence movement with near unimaginable viciousness, Mazzola organised races throughout the city. ‘They couldn’t stop cycling, because the people felt it. Even as people were dying, cycling continued,’ he told me. ‘It was the dream of the people.’

Carmelo Saglimbeni, 75, chosen for the Olympic squad in 1960 and 1964, rode in Ethiopia’s colours. But he didn’t do so out of love. Like most amateurs, he’d train by moonlight. One night, he told me, along with another local legend named Tesfalidet Hailom, he was shot at and beaten by Ethiopian troops. He moved to Italy in 1980, and recently returned to Eritrea for the first time in 35 years. ‘I thought everyone would have forgotten me,’ he said, starting to weep. ‘But the whole population of Eritrea were waiting for me to come back.’

Eritrea’s first, unsung international cycling glory was attained during the 2nd All Africa Games, held in Lagos, Nigeria, in 1973. An all-Eritrean cycling squad won two gold medals for their Ethiopian masters. ‘We weren’t even given tracksuits,’ medal winner Bayene Simon told me. ‘But after we won, they were quick to give us blazers for the photographs.’

President Isaias Afwerki’s Eritrea holds back on many things, but it does not skimp on the tracksuits. Still, resources are decidedly limited. Nonetheless, an astonishing number of the city’s young people hit Asmara’s roads every morning. They start their careers on what are here termed ‘mountain bikes’ — heavy steel frames outfitted with 25mm tires and straight handlebars adorned with bullhorns. They cost around 22,000 nafka ($2,000), a considerable investment.

If a cub cyclist wins enough races, his or her family will pool their money to buy something better approximating a race bike.

And if they win enough on their new machine, they might catch the attention of this man: Cycling Federation president Asmerom Habtemariam, pictured here at his desk in his office.

And should they perform for Habtemariam, then perhaps they’ll be one of the lucky few to craft a career out of cycling. This is the gifted 23-year-old Meron Teshome Hagos, who came second to Tour de France star Daniel Teklehaimanot in this year’s Eritrean National Championship time trial. He’s currently on the MTN-Qhubeka feeder team, and is aiming for a medal at the All-Africa Games in Congo-Brazzaville, scheduled for September.

On most training sessions, the Women’s National Team join their male counterparts for at least a portion of the ride. Wehazit Kidane is probably the best female cyclist in the country, having earned two gold medals in both the 2013 and 2014 National Championships, and plenty of hardware at the African Continental Championships over the course of the past several years. She’s enjoying a post-ride Fanta in a small store popular among cyclists training on the Mai Nefhi road.

In Eritrea, it’s true, cycling is bread. The sport is everywhere — embedded in the history, in the architecture, in the fabric of the relationships between castes, classes, religions. It’s a language. It does not solve everything. But in a country this battered, pride means a lot. And so do dreams. DM