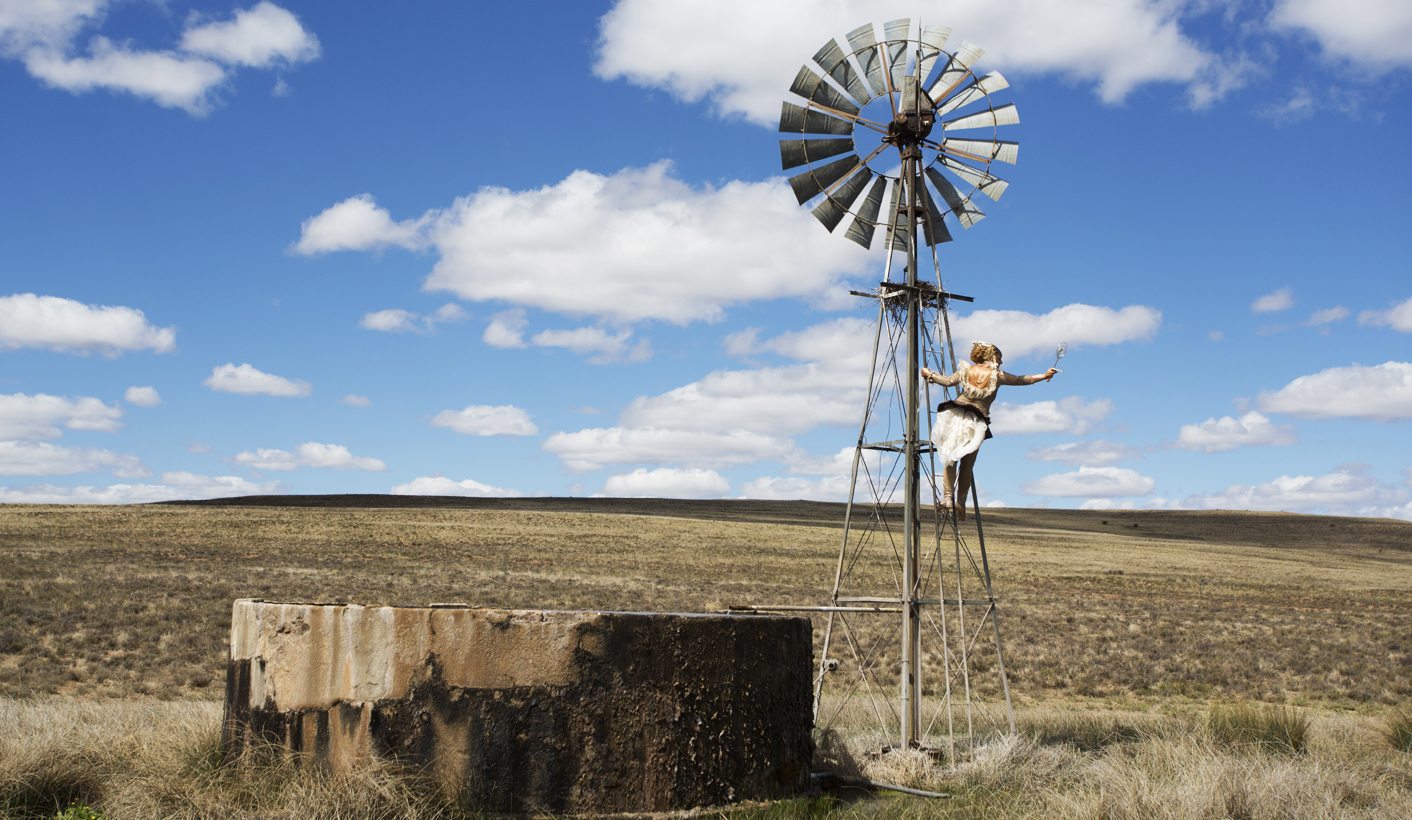 Let’s get this out of the way first: Karoo Disclosure is a little left of centre. It’s a hodgepodge of voices clamouring for attention, and the South African Museum is not necessarily the best venue for it. There’s a very real danger that any point it makes might get lost in the belly of the Whale Well.

It also might just be preaching to the choir. It’s quite possible that anyone who goes to see it might just already be an anti-fracking activist. It’s not entirely likely that prospectors will be wandering through the museum of an afternoon pondering the error of their ways.

The centrepiece of the exhibition is a short film – the title piece – entitled Karoo Disclosure, in which two characters, representing nature and development, battle for control of the Karoo. The core question it raises is around the battle for balance. Alongside is a striking photographic exhibition featuring the same characters and raising, aesthetically and accessibly, some relevant questions around the issue of fracking. The average viewer may find the photography exhibition more digestible than the film. Nonetheless, collaborating artists Deborah Weber, Margaret Stone, Peet van Heerden and others have so far demonstrated their intention to keep the film moving; it was selected for the Karoo Indy Film Festival and shown at That Art Fair.

There will be those who come for just the film and the photography; however, some of the greatest treasures of the exhibition are offered up by the Karoo itself. The exhibition features some fascinating fossils that were discovered in the area, and Smith gave an address that for this writer was a highlight, not least because it delivered some great surprises. Weber and the creative team have raised the question of what stands to be lost should fracking become a reality – Smith provided at least one compelling answer.

According to Smith, the rocks of the Karoo are “greatly underestimated” in terms of their paleontological heritage, and researchers have “hardly scratched” the surface of the mammal fossils that are available in the region. “It’s a very exciting ecosystem,” he said. One of the examples Smith gave was ‘Gordon’ (his nickname), only the third dwarf pareiasaur to have been found in 150,000 years, which was discovered in the Karoo by Smith’s team.

Smith explained that the Karoo is of such value to science because the rocks formed between 200-million and 300-million years ago – a period of time particularly significant in geological history, because it signified the extinction of dinosaurs and the evolution of mammals. Some of the best rocks for collecting evidence of this period are situated in the Great Karoo, according to Smith. “What was that world like? I go to the Karoo to find the evidence,” he said.

“I’m not making any major statement about fracking. My job here today is to show you the wonder that is sitting in the rocks of the Karoo.” The exhibition displays, at least to some extent, some of these wonders.

UCT professor Lesley Green raised some of the environmental concerns; these may be less surprising to those who have been following the fracking debate, but are nonetheless worth raising. Green pointed out that the Cancer Association of South Africa has recently publicly opposed fracking, stating that 150 of the 750-odd chemicals used in fracking processes are carcinogenic – that’s not to speak of the other health risks associated with the lungs, endocrine and neurological systems, and other bodily functions.

Green’s main concern was that she did not believe safety assurances to be credible and that leaks and contamination would be inevitable. “The logic doesn’t hold,” she said. “The chemistry of cement is not adequate. Do any of you have a house that does not have a crack in it?”

To put Green’s comments in perspective, it is worth looking at some of the research that has been done in the US. Accidents are not enormously frequent, as pro-fracking writers have pointed out, but they are not reassuringly rare, either. There have been over 1,000 documented cases of water contamination next to areas of gas drilling as well as cases of sensory, respiratory, and neurological damage due to ingested contaminated water; methane concentrations are, on average, 17 times higher in drinking-water wells near fracturing sites than in normal wells.

There is also a significant environmental impact. Researchers say 30%-50% of the fracturing fluid is recovered; the rest, which is toxic, remains in the ground and is not biodegradable. In 2012 alone, fracking wells in the US produced an estimated 280-billion gallons (1,059,915,299,520 litres) of wastewater. South Africa, with its severe water shortage and frequent droughts, can ill afford to waste water. Around 20 million litres of water are required per ‘frack’ – according to Cape Town Etc, that’s enough to supply the whole of Graaff-Reinet for three days.

The underground injection of wastewater, moreover, increases the risk of earthquakes; it’s essential that how much is being injected, the pressure at which it’s being injected and the porousness of rocks be taken into account. Scientists note that each earthquake increases the risk of more and larger earthquakes. Last week, Canadian media confirmed that fracking by a subsidiary of Malaysian oil and gas company Petronas triggered one of the world’s largest earthquakes in 2014; further south, Oklahoma now has two quakes a day or more.

There are also more immediate health concerns than cancer. A US study found that air pollution from fracking reduced lung function in healthy people and triggered attacks in asthmatics, and that its effects could also be linked to increases in school absences, hospital visits and premature deaths – a strain the South African economy, and its school system, can ill afford.

Fakir discussed the economic viability of fracking. For Fakir, central to the debate is the role of competitiveness. Fakir said he found Shell CEO Bonang Mohale’s claim that fracking would leave the Karoo better than it was before “remarkable”. Pointing out that today, the most lucrative oil and gas reserves are controlled by governments, Fakir said private companies which had previously dominated this market were looking for other reserves, outside of what’s known as conventional resources. Oil and gas now have to be extracted from more difficult areas – or unconventional resources – which cost a great deal more, and the oil price has to be sufficiently high in order to make such an enterprise viable.

“Oil and gas companies are desperate to find new reserves to keep their companies viable,” he said. “If they cannot replace their oil and gas reserves over time, their shareholders start getting nervous and share prices start moving in the wrong direction.”

The problem with fracking, he pointed out, was that it came with a high level of uncertainty. “You don’t know how much gas or oil you have until you fracture it,” he said. “You can’t just put up a drill and tomorrow imagine that you can get a successful flow of gas or oil. (Based on discussions with geologists and engineers) … I believe it is more an art than a science.”

According to Fakir, it’s not unusual for around 50%–60% of capital costs to be sunk relatively quickly and without the well in question having been completed. At a generous estimate, he said, recovery factors for Gas in Place were around 10%–30%. The life cycle of a well is very short and requires more capital.

Fakir also noted some environmental concerns, pointing out that water was most likely to be used owing to its cost-effectiveness. “Contrary to what people will tell you, water is the best frack fluid,” he said. “Water is used to create a proper frack and to allow the gas to escape in the most efficient way.”

The only route to economic viability was, unfortunately, the least environmentally friendly, he said. “It’s about as drilling as much as you can as fast as you can over as vast an amount of territory as possible, because you have already sunk a lot of money into the ground … That’s what shale gas is all about; that’s what we found in our study,” he said.

For fracking to work, there needs to be a balance of four factors: a deep and thorough understanding of the geology of the area; well-developed technologies; the right pricing; and consideration of the environment. “Once you’ve put all of that together, you can make up your mind whether it will work,” Fakir said. DM

Karoo Disclosure is currently on at the Iziko South African Museum in Cape Town. Visit their Facebook page at https://www.facebook.com/KarooDisclosure