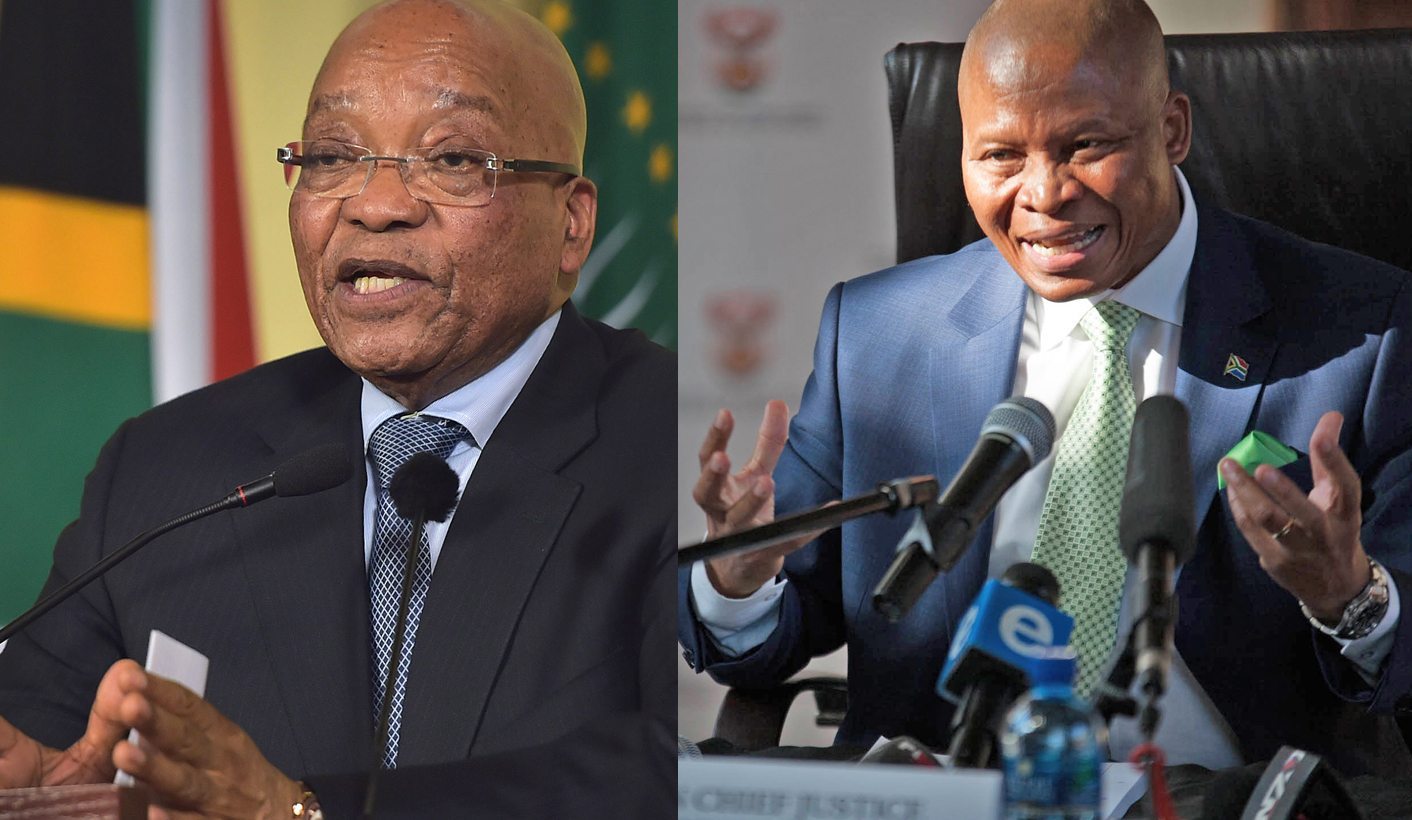 At the end of an unprecedented closed meeting between the judiciary and executive on Thursday, President Jacob Zuma and Chief Justice Mogoeng Mogoeng shared a stage to outline 10 commitments to address their challenges. Some were straightforward. Others were not. For Zuma it was the best possible outcome, while the judges are playing a different game to the politicians. The future of the relationship is by no means certain. By GREG NICOLSON.

On either side of the table at the Union Buildings both parties had formidable teams. On one side, Zuma was accompanied by Deputy President Cyril Ramaphosa, four ministers and two deputy ministers. On the other, Mogoeng was with his deputy Dikgang Moseneke, the president of the Supreme Court of Appeal (SCA), another SCA justice, and four judge presidents. The meeting was a first in South Africa but the outcomes were more high school than high-level meeting between two branches of government:

Essentially, the executive and judiciary agreed to do what they are supposed to do and resist, as much as possible, from pissing each other off. If they do, they should talk about it. It’s on of those joint statements that has parties recommitting to the values they are accused of straying from.

Recent comments from the ANC suggest the various detours on the righteous path might be traced back to Moseneke. Last year he spoke in the US on a range of constitutional issues, but the one that caught the headlines was whether the power to make key appointments to positions like the national director of public prosecutions should be vested in the president. Such appointments have been tested in court and may not be in the best interests of democracy and accountability. It was reported as a call to limit Zuma’s powers. By speaking out, Moseneke bucked the trend of judges being often silent on issues outside the court and caused an interesting debate on the judiciary’s role in public discourse. It was new in SA and raised talk on the separation of powers and caution on criticism.

But the real spark for Thursday’s meeting between the judiciary and the executive was ANC leaders’ criticism of the courts. When the North Gauteng High Court ordered Sudanese President Omar al-Bashir be arrested in accordance with an International Criminal Court warrant and the country’s obligations under the Rome Statute, the state was internationally embarrassed and criticised for letting him go. It ignored a court order, the country’s own laws.

The ANC might have been defending the state’s decision in a complex international relations issue or deflecting, but the judiciary faced an onslaught of attack. ANC Secretary General Gwede Mantashe said, “There is a drive in sections of the judiciary to create chaos for governance; that’s our view.” He accused the North Gauteng High Court and Western Cape High Court of having a “totally negative” narrative. Police Minister Nkosinathi Nhleko has reportedly told police officials that judges are colluding with outsiders. National Council of Provinces Chair Thandi Modise has accused the courts of interfering with Parliament. The ANC national executive committee has claimed there is judicial overreach, questioning the separation of powers and creating the impression of bias.

It provoked Chief Justice Mogoeng to call a meeting of judge’s and hit back. He called for criticism to be fair, specific and constructive. “General gratuitous criticism is unacceptable,” he said. “There have been suggestions that in certain cases judges have been prompted by others to arrive at a certain result. This is a notion that we reject.”

Such is the state of relations between ruling politicians and the executive. In such a context, the meeting’s resolutions that court orders should be complied with, everyone should exercise caution in making criticism, and complaints about the judiciary should go to the Judicial Conduct Committee are significant.

“The constitutional reality is that it is the responsibility that rests on the shoulders of the judiciary to interpret the constitution and the law. That will never change but it would be quite arrogant of the judiciary to say nobody who is not a judge should be heard to be questioning the manner in which we go about our business. By the way it has never been our position. Our position has been it is the way you question that matters to us. Now separation of powers, judicial overreach, are issues that are raised with a sufficient measure of frequency to justify or warrant a broader or deeper engagement than we have had today,” said Mogoeng on Thursday, diplomatically yet defiantly.

“As the judiciary we obviously don’t think we are overreaching but you know it is not always that you can be the best judge of yourself. So we would benefit from the views, the constructive views and criticism of other arms of the state as much as we would benefit from constructive criticism from the media and academia,” he continued. There might be a conference to discuss such issues and both Zuma and Mogoeng committed to further discussions when the need arises.

The chief justice and the president were positive Thursday’s discussions were historic in the country’s democracy. They mentioned the need to support equality in justice between rich and poor and transformation in the judiciary.

But as long as the ANC and its leaders are taken to court, it’s unlikely the questioning of the judiciary will stop. It’s much easier to cast public aspersions than officially question a judge’s bias. It’s easy to say you’ll adhere to court orders but when doing so has consequences, it’s relatively easy to ignore them.

“It is bound to pinch somewhere and when it does it attracts reaction.” He held his ground and made positive inroads against the attacks, but those making accusations against the judiciary are motivated by politics rather than the law. They might have quietened for now, but it’s unlikely they will keep quiet the next time their party and careers are threatened. DM