Fabulous Animal Farm should be performed in Parliament 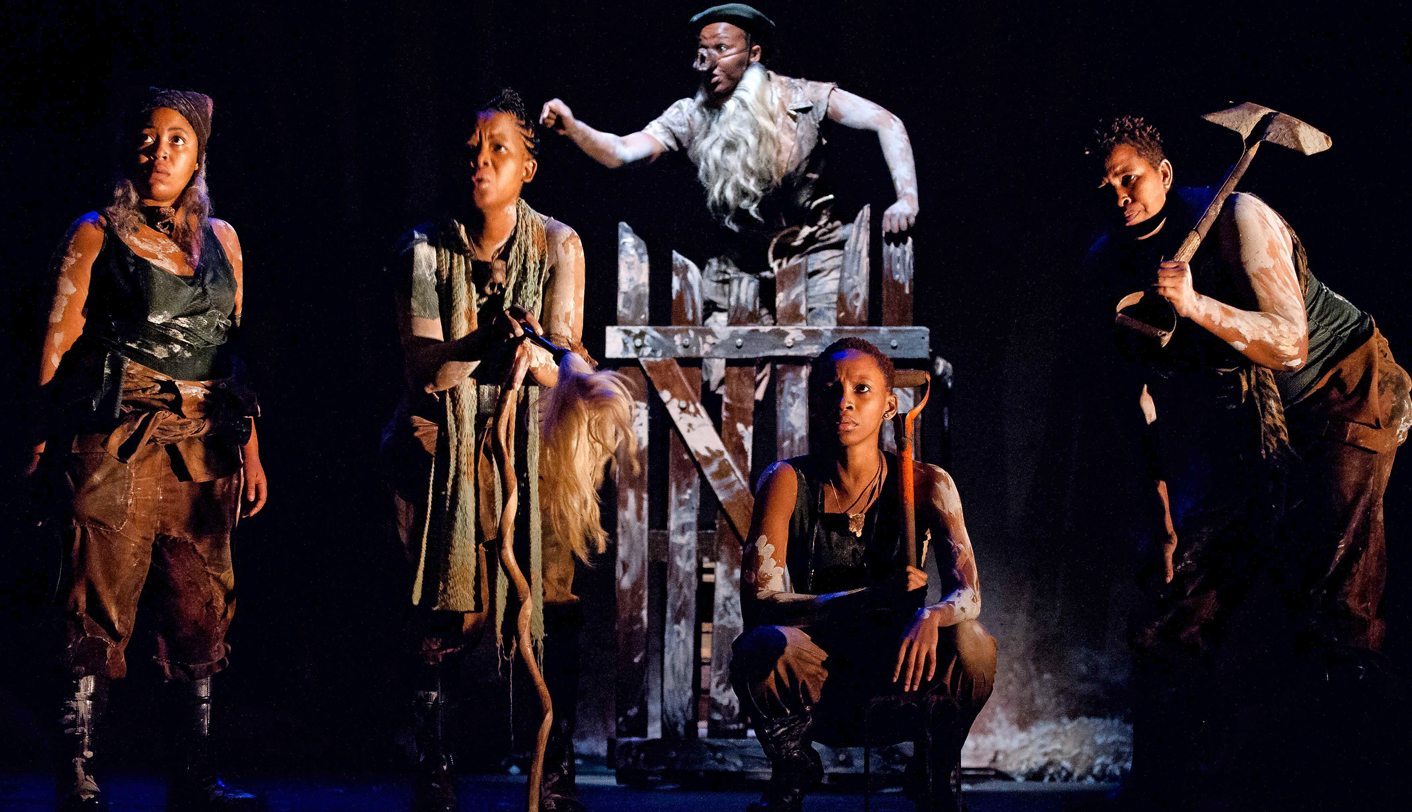 Animal Farm at the Market Theatre is so fabulous that even the word fabulous barely does it justice. Playwright Neil Coppen has woven in some wicked local references quite brilliantly, leaving the audience in stitches as the animals discuss the wayward activities of the pigs gorging themselves on the profits of revolution and proving even more oppressive masters than the Nats, sorry, the farmer, that they overthrew. By LESLEY STONES.

I’m just going to jump in and say it – Animal Farm at the Market Theatre is a show you have to see.

Gushing isn’t usually my forte, but this production is so fabulous that even the word fabulous barely does it justice. Yet I went alone, unwilling to risk taking anybody with me in case it was crap. That’s because the play was produced specifically for schoolchildren, to help them understand the text of Animal Farm that they’re studying in class. Oh-oh, that sounds like an excellent reason to stay away.

But success was practically guaranteed once playwright Neil Coppen was brought on board to adapt it slightly, design the setting and direct it. And the result is, quite literally, wow.

Much of its magic lies in the original story, written by Englishman George Orwell in 1945 about the Russian Revolution. Are we sure it wasn’t written here, this year, to focus on the African National Congress?

The plot has the animals on Manor Farm rising in revolution to evict their human master and declare new rules to create a society where all animals are equal. A farm where the strong will look after the weak and no animal will kill any other. It doesn’t last, of course, as the pigs – the ‘brainiest’ of these equal animals – set the rules, start dividing up the work and the riches, and soon develop a taste for power.

The trappings of good living appear gradually. A beret at first, then a uniform. A pair of bling sunspecs, a bottle of booze in the pocket. A raised box to speak from, then a podium and a megaphone.

Coppen has woven in some wicked local references quite brilliantly, leaving the audience in stitches as the animals discuss the wayward activities of the pigs gorging themselves on the profits of revolution and proving even more oppressive masters than the Nats, sorry, the farmer, that they overthrew.

When MoMo Matsunyane first plays Snowball, who leads the animals into revolution, her speech sounds like a potent cross between Nelson Mandela and Julius Malema. But as the pigs take power, all traces of Mandela are lost, equality is trampled into the ground, and losers, laggards and those who dare to question are executed as they reign supreme.

The all-female cast of five is unbelievable. They move like animals and speak as animals might speak, with a squeal and a grunt or a cluck punctuating their words. They each play a main character and several other roles as the story unfolds at a cracking pace.

Two animals act as our guides through the action, Muriel the goat (Matsunyane) and Clover the horse (Zesuliwe Hadebe). At one stage when they ask what the pigs are doing with the profits, they say the only money they’re seeing is being spent on building extensions to the manor house. “There’s a rumour they’re building a swimming pool,” one of them chirps, and the whole theatre erupts in laughter.

Mandisa Nduna as Squealer the spin doctor is superb. She has some brilliant lines, explaining why the pigs aren’t really breaking the communist rules. She persuades the animals they have collective amnesia if they thought that comfy beds or booze were out of bounds, and reworks history so the good ideas of others are credited to their new leader, Napoleon (Mpume Mthombeni).

Nduna goes from overalls to a stylish trenchcoat, the ever-present hanger-on growing rich by sycophancy. Oh, so many allegories to our own flawed revolution, so much to think about.

Everything about this production is brilliant. The lighting by Tina le Roux starts with a moody farmyard, then casts silhouettes on a backdrop as more alarming movements take place. Often there’s a pacing, jackbooted figure behind the workers, or a near-terrifying scene where frenzied dogs are unleashed on a hapless victim. Music and sound effects by Tristan Horton support the action perfectly, most memorably when it grows menacing as the revolutionary leaders crack down on lesser comrades. Excellent costumes by Thando Lobese and Coppen give each actress her animal features, while the stage set features portions of fencing and sacks of grain, which eventually break the back of Boxer, the loyal horse (Khutjo Bakunzi-Green).

Then there are the gumboots, originally a symbol of unity that later lay strewn on the ground after a savage massacre. As the surviving animals walk bewildered through the carnage, there can’t have been a soul in the theatre who wasn’t thinking of Marikana.

The production was produced by ShakeXperience, an organisation for learning through the arts. In the programme notes, Coppen says his adaptation aims to excite young audiences about the novel and show them what a magical and exciting experience the theatre can be. He’s succeeded brilliantly.

Animal Farm really is a magical experience, and not only for students. This deserves to be seen in mainstream theatres. In fact forget that – this show should be performed in Parliament. DM

Animal Farm runs at the Market Theatre until September 6.