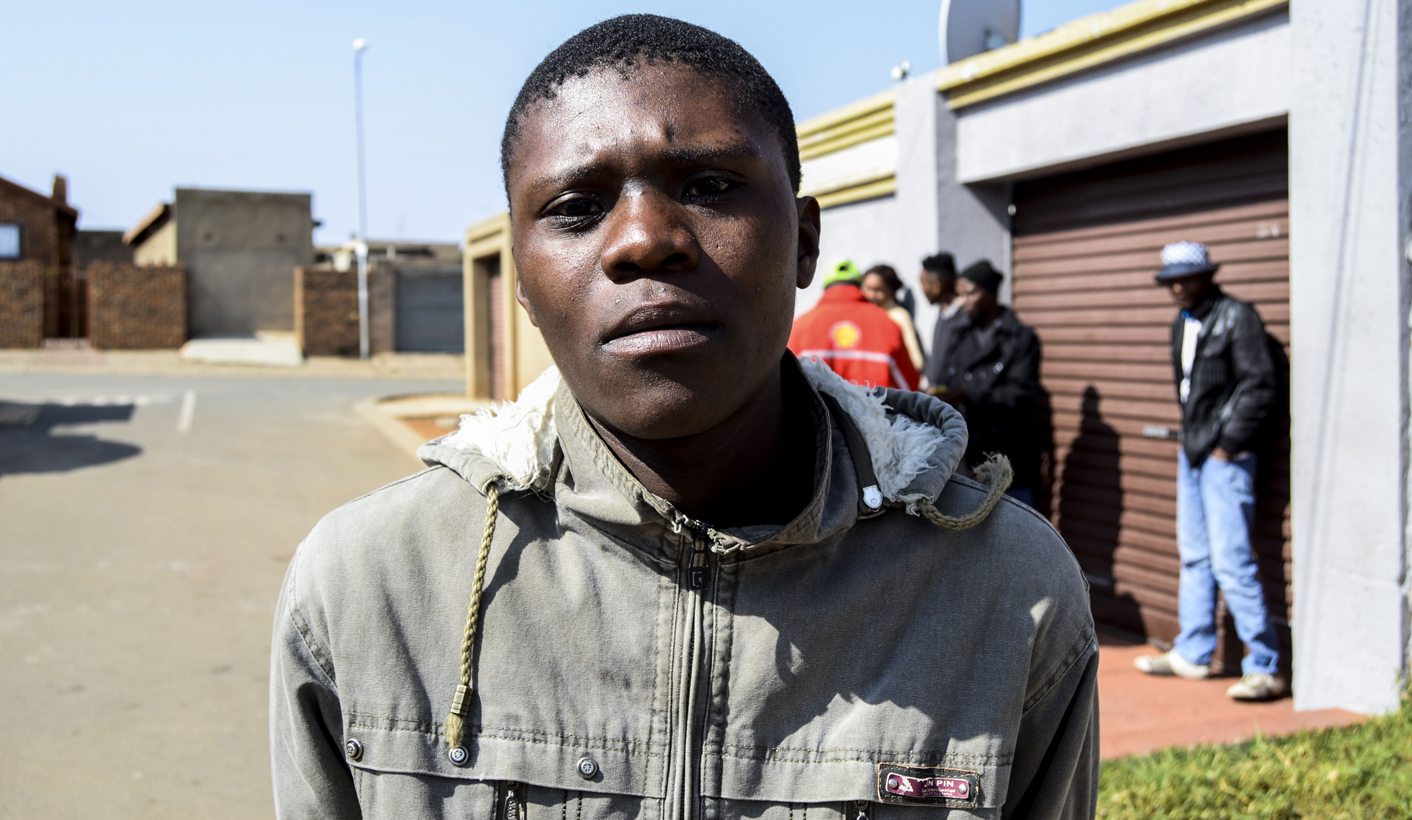 South Africa has a youth unemployment crisis. Statistics suggest the problem has worsened since 2008, leaving more than 5-million people between the ages of 15 and 34 neither employed nor receiving education or training. In the first of a two-part series, SIBONISO MNCUBE puts a face and a voice to their struggle.

I’ve been waiting for work and it’s been almost three years. I didn’t have money for further education; my parents didn’t save for me like the white children. When I was growing up I always wanted to work in the media industry as a radio DJ. But right now I just want to find a job because I can’t do the thing I love. But it’s difficult to go look for work when you don’t even have money to catch the damn taxi.

Eunice: I have been unemployed for four years now. I was working at an engineering company, but I was laid off because I fell pregnant. After giving birth I went back in the hope of finding my job but someone else had filled that position and I was told I would get a call, but I have been waiting since. I want to go back to school, because I might get a job after getting a qualification. It really hurts having to see your children go hungry and not being able to provide, you completely lose your sense of pride.

Mpakiseng: The last time I went to go look for work I was told that they don’t hire women and that discouraged me. I’ve been unemployed since 2009, I tried applying for work at our municipality but apparently they give first priority to people that are part of the ANC. I bake to make ends meet, but sometimes clients cancel orders or don’t pay all the money. When you’re old and unemployed, you don’t have a say in what goes on in your life.

No jobs: A disabled young job-seeker leaves a workplace in Johannesburg. He tried his luck, despite the sign ‘No jobs. Awukho umsebenzi’.

I wanted to be a soccer player, but sports in the country don’t support women in sports. Look at Portia Modise, she’s the country’s best soccer player, but she wasn’t even earning a fraction of what people like Teko Modise are getting. I’ve since left soccer because I don’t have money to go to practice and I have a child now, which means I have to stay home and take care of him. I have been unemployed for the past seven years. I’ve been looking for work as a safety officer. I have done all that is required but it’s still difficult to find work.

I collect paper and card boxes to recycle. I also sell solar-powered lights because I saw an opportunity due to this during load-shedding. I’ve been unemployed for two years and I support five children. Whatever money I make has to support the children and I basically live hand to mouth. I didn’t complete school because of drugs and gangsterism, but I want to be an inspiration to other children through the word of Jesus, because I’m a soldier of God.

I’ve been employed in the past as a construction worker, but it was on a contract basis and now I’m back on the streets looking for work. Working in construction was really terrible because you don’t have benefits and you are not guaranteed your job tomorrow. When I was growing up I wanted to be an economist, but I realised that was just a dream. I’ve never even met an economist from the township. I want to live the South African dream, have money, a house and a wife.

I sew clothes and do marketing for Retro Zulu, a DJ crew from Soweto, I studied marketing in college after school, but I have been unemployed for two years. I had hopes that I would work in marketing and advertising, but I can’t find work. My biggest struggle is not having enough money or support to buy material and it’s hard to find clients when you’re stuck in the township and the world is not exposed to your craft.

I’m just sitting at home and not doing anything for employment, I use to work as a cashier but the shop closed months ago. I’ve been looking for other work, but it’s difficult because I can only speak Afrikaans. My mother helps me support my two children and I’m thankful for that. I am willing to do any work I can find just to support my children.

I’m currently unemployed and it’s been one year and six months but I’m waiting for study material from Oxbridge Academy, I’ll be doing long-distance learning. So meanwhile I’m just sitting at home bored and there’s nothing much to do. I think the standard of free education is appalling, especially in colleges and FETs (further education and training colleges), that is why you find most children are discouraged to pass. I wanted to be a dentist when I was still in high school, but unfortunately my maths and science were not to standard. But for now my hopes for the future are to become a safety officer.

Nyaope awareness: Two people walk past a government mural discouraging drug use. Issues of drug abuse among the youth are linked to poverty, unemployment and inequality.

I’m just sitting at home and doing nothing. I’ve been unemployed for a year now. I failed matric and now I just want to go back to matric and re-write. I want to be an accountant and work for a company. I once saw a girl from a big company driving a BMW and she looked so happy and I knew that’s what I also wanted. Not having a job means you are not able to buy the things that you want and you have to ask for money from parents.

I have been unemployed for four years now and I haven’t heard from all the places that I have applied to. I have even given up looking for work because what’s the point? It’s really difficult because there is no one I can look to. As an orphan, the other family members don’t really give you first priority as your own parents would. I make end meets by selling beads and accessories. It really helps a lot to buy the necessities. When I was growing up I wanted to be a weather anchor on the news, but now I just hope to find work anywhere.

Fisagie: I’ve been unemployed for two years. Sometimes I work part time as a boiler maker, but I haven’t been to work for the past three months. I have children that I’m not allowed to see because I can’t afford to take care of them, so my father-in-law threatened me and told me to stay away from my children. I left school in the ninth grade and it’s really tough, especially putting food on the table and supporting my children. When you are this down and out its easier to fall into drugs because you feel defeated. But my dream is to get my children.

Malan: I am qualified as a welder and a mechanic, but I haven’t found work in the past two years. I struggle so much because I can’t put food on the table at home so I was kicked out because I can’t contribute and now I stay with Willem because of my drug habit. I don’t think I’ll go back to school because I’m really old now. I honestly want to be a successful man, have a beautiful wife and a house. My plans for the future are to start my own business, help other people like me to find work and also help the community by ridding them of drugs.

I have matric, but I need ‘the starter pack’ – this is a driver’s licence and a qualification of some sort to get me started. Beyond that I would still have to bribe someone in that company to find me work. A big problem is that the youth have pride and won’t do jobs that are degrading, like sweeping the street or installing pavements. I’ve been unemployed for two years now and joining the army sounds like a good idea because I heard they pay well. DM