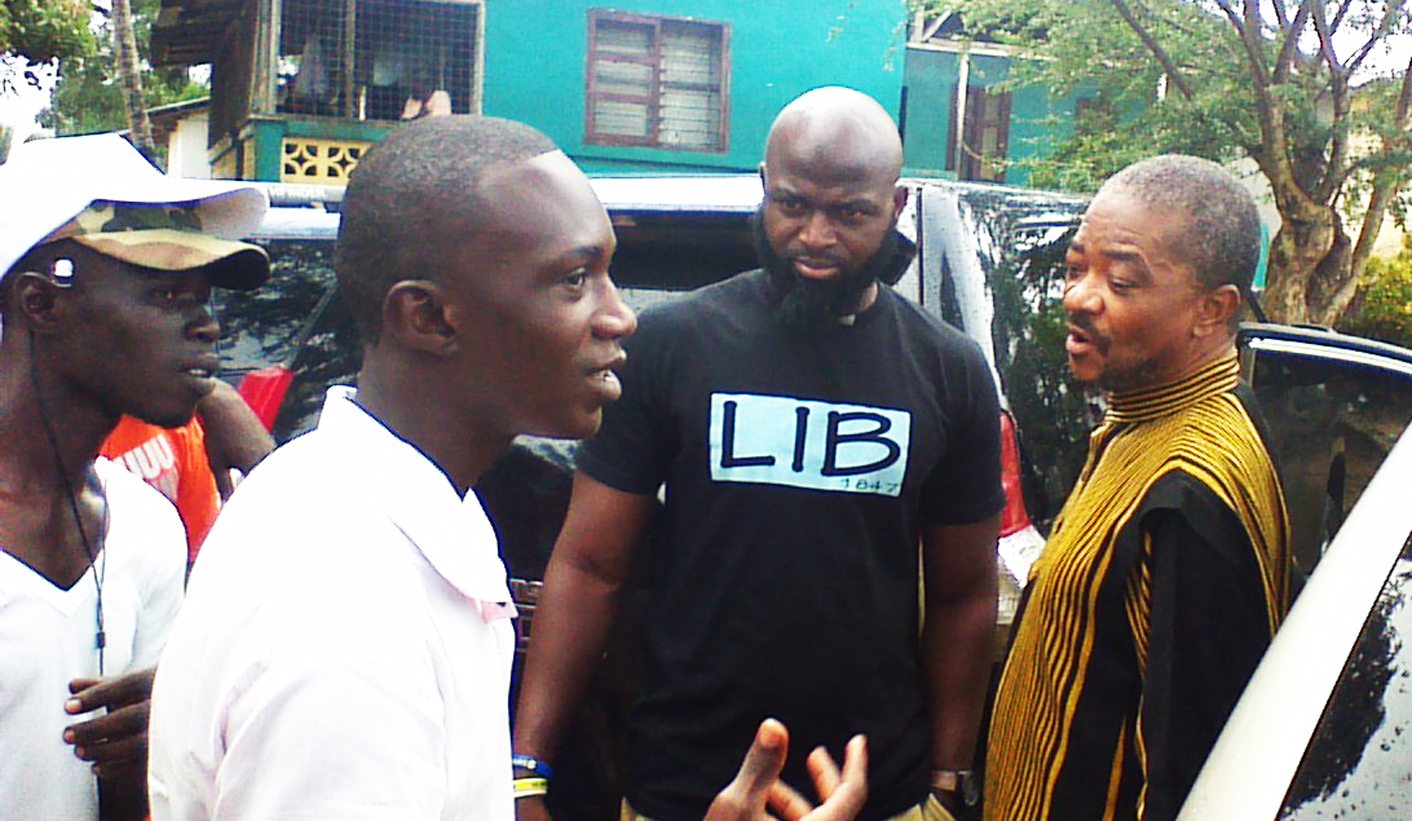 A particularly unlikely duo highlights the contradictions and challenges of 168 years of Liberian nation-building in the wake of recent instability over moves to have the country declared a Christian state. Reverend Emmanuel Bowier and Ali Sylla, a Muslim several decades Bowier’s junior, are collaborating under the banner of the non-governmental organisation the Centre for Counselling and Restorative Dialogue to encourage religious unity among Monrovia’s youth. For both men, the mission is deeply personal. By BROOKS MARMON.

A brief calm descends over the city as about 80% of Liberians head to church (around 15%-20% of the population is Muslim). Settled by black Americans throughout the 19th century, the Baptist, Presbyterian, and Methodist churches have been historically dominant in a city that was originally called “Christopolis”.

Liberia’s Nobel prize-winning President Ellen Johnson Sirleaf can often be found worshipping at the historic Providence Baptist Church. During World War I, the Liberian president and his cabinet retreated to the same edifice to pray for divine intervention after receiving bomb threats from Germany (their prayers were answered in the form of the British navy who chased away the menacing U-boat).

As the threat of Ebola subsides and the scars of civil war fade, instability in Liberia has begun to surface again around the recommendation of a constitutional review conference that Liberia be declared a Christian state. Supporters point to this historical heritage while opponents suggest it is ill-advised for a country emerging from lengthy conflict to constitutionally exclude a significant Muslim minority.

Following several months of silence on the issue, on August 18, Sirleaf scrapped the Christian state recommendation in a communication to the Liberian legislature, noting that it would “foment division”. The decision comes after significant mobilisation against the initiative by a range of actors, including one particularly unlikely duo that highlights the contradictions and challenges of 168 years of Liberian nation-building.

Reverend Emmanuel Bowier, a slight, clean-shaven and revered former information minister who expounds on Liberian culture and history on his daily radio show, laments that “at a time when we should be building this country, we are focusing on all sorts of flimsy things”. Meanwhile, Ali Sylla, a heavily bearded and stoutly built Muslim several decades Bowier’s junior, also advocates for Liberian social unity through his nongovernmental organisation, the Centre for Counselling and Restorative Dialogue (CCRD), and via his own radio show on a Muslim station, Al-Falaah.

Together, this unlikely duo (Sylla recently controversially dropped out of the contest for a senate seat on the ticket of the ruling Unity Party, which once battled to overthrow the president Bowier served) is collaborating under the CCRD banner to encourage religious unity among Monrovia’s youth. For both men, the mission is deeply personal.

As Liberia’s civil war erupted at the end of the Cold War, Bowier, a former press attaché in Liberia’s US Embassy, was dispatched to Washington in 1990 by then president Samuel Doe in a last-ditch bid to secure US intervention. US relief was not forthcoming and the country did not see a durable peace until 2003, after as many as 250,000 Liberians may have been killed.

For Sylla, the tragedy was immediate and direct. His father, a Muslim cleric and prominent member of the Interfaith Mediation Committee (now known as the Interreligious Council) was murdered the same year as Bowier’s failed mission. Sylla fled by foot to neighbouring Sierra Leone, where he used a Christian pseudonym. He returned to Liberia to finish high school and then moved to the US, obtaining a Master’s Degree in criminal justice before resettling in Liberia in 2009.

As Sylla tells it: “I heard him (Bowier) on the radio and he heard me on the radio and we met.” Thus launching a collaborative project that with minimal funding has visited over a dozen sites around Monrovia. Speaking in schools and intellectual centres, “Rev Bowier brings the history of the country, I bring the concept of restorative dialogue”, says Sylla.

The CCRD targets communities near sites that have experienced traumatic episodes in Liberia’s recent history, such as the Lutheran church where troops loyal to Doe, were believed to be responsible for the massacre of hundreds of innocent civilians (Bowier had left the government a few weeks before the assault). Depending on the setting, they address students in crowds or convene small focus groups.

Whatever the size, the aim is the same. Bowier lays out a historical argument for why Liberia should not be considered a Christian state (most simply, it was inhabited by people practicing Islam long before the settlers from the US began to spread the gospel) while Sylla draws from his education and experience to illustrate the importance of peaceful coexistence. The focus is on dialogue, which often begins by getting youths to speak about friends of a different religious background.

The youth continue to be involved after the formal programme ends. Engagement and training for volunteer peace educators multiplies the effect of the outreach in the communities, while the trainees also constitute early warning networks to document signs of tension and conflict. The CCRD has also met with representatives from a number of youth organisations, political parties, nongovernmental organisations, and United Nations officials to provide information about the emerging dynamics of religious conflict.

A local saying notes: “There are three types of men – the black man, the white man, and the Liberian man.” Bowier affirms this statement with a more articulate and gender neutral delivery: “You cannot develop Liberia if you don’t know the background of Liberia.”

Since the return of peace in 2003, Liberians have worked tirelessly to consolidate their economic and social security. With the collaboration of individuals like Bowier and Sylla, it is evident that a growing segment of Liberian society is jointly leveraging the experiences of the past to ensure that tomorrow brings a brighter future. If Liberians can successfully navigate a crisis of religion, the bedrock of the nation’s society, then they are well placed to overcome any other obstacle. DM

Brooks Marmon is an employee of the Accountability Lab in Liberia, tweeting on Liberian and African issues @AfricaInDC.