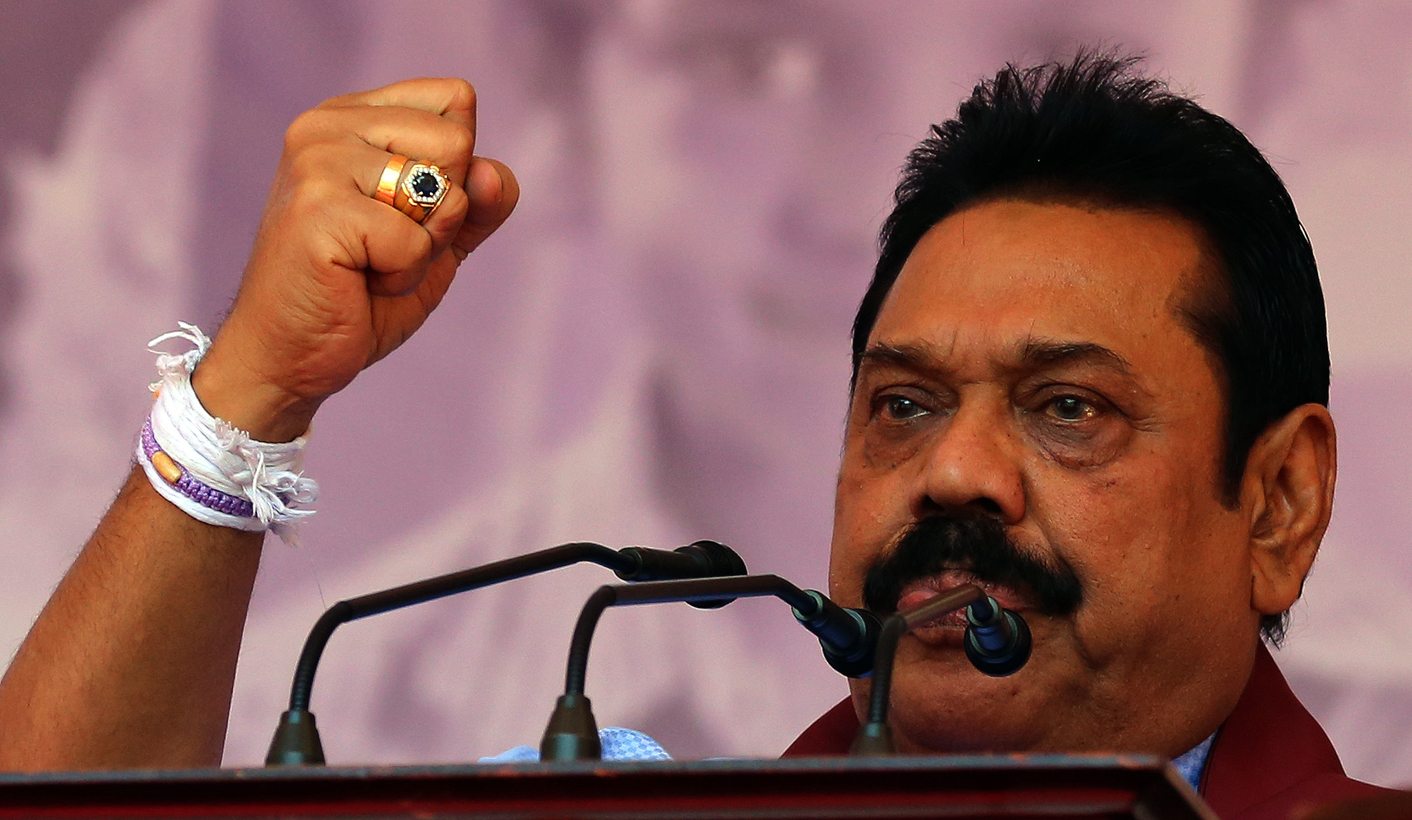 Former president Mahinda Rajapaksa is larger than life, and as close to a hero as Sri Lankan politics has. He’s also one of the biggest dangers to its nascent political well-being. The people love Rajapaksa out of all proportion, enough that many would like to have seen him appointed prime minister if the United People’s Freedom Alliance won the election. Loved enough, perhaps, to undo the country’s brand new term limits. By BERT ARCHER.

The signs were heavy on the ground as the staff of the Pinnawala Elephant Orphanage huddled around the black and white television in the canteen watching election updates in the breaks during an over-wrought children’s movie about a boy and an elephant. It was the day after the first non-violent day of voting in Sri Lanka’s living memory, and the contest between the United People’s Freedom Alliance (UPFA), a political alliance of several parties known collectively as the blues, and by their symbol, the betel leaf, and the United National Pary (UNP) known as the greens and by their symbol, an elephant. It was still too close to call.

Ignoring the elephants trouping by for one of their twice-daily baths in the nearby Maha Oya River, everyone catching a quick plate of traditional Sri Lankan rice-and-whatever’s-there was a blue supporter, the party of President Maithripala Sirisena and, more importantly, of his immediate predecessor, Mahinda Rajapaksa.

The former president is larger than life, and as close to a hero as Sri Lankan politics has. He’s also one of the biggest dangers to its nascent political well-being.

Think of him as a South Asian Paul Kagame. Like the Rwandan president, he is credited with ending the most horrific time in his nation’s history: the 26-year-long civil war that terrorised the nation and claimed about 100,000 lives. And like Kagame, he is loved out of all proportion for it. Loved enough that many would like to have seen him appointed prime minister if the blues won. Loved enough, perhaps, to undo those brand new term limits.

But perhaps love is too simple a term. Jagath, a 48-year-old artist, a Sinhalese Buddhist who works for the orphanage making mostly religious banners to drape over the elephants on feast days, used to work at the Dehiwala Zoo in Colombo, until February 3 2008. He was at Fort Colombo train station when a woman suicide bomber killed 12 people and injured more than 100 in an attack on a nearby Dehiwala train station during rush hour. That’s when he asked for the transfer to the elephant orphanage, about two hours north of the capital in the small town of Pinnawala, well away from most of the violence.

“All the parties that have governed Sri Lanka are bad,” he says. “There is no question about that. The party members speak on behalf of the party members alone. But I feel a sense of gratitude deep down towards Rajapaksa for winning the war.”

Like Kagame and Burundi’s Christian Pierre Nkurunziza, whose first presidential term saw the integration of the last of Burundi’s rebel forces into the political mainstream, Rajapaksa has a permanent aura around him that elevates him above politics in the eyes of many, like Jagath. The problem comes when the leaders themselves agree, equating their own success with that of the nation.

Kagame illustrated the confusion most succinctly in an interview with Uganda’s New Vision in June. “I don’t think the problem can be solved by term limits, neither, I would I say are term limits a solution to Africa’s problems,” he said. “Have we managed to put in place institutions that define us and serve us beyond this single discussion of term limits? Creating the rule of law, a parliament that functions, civil society and private sector doing what they should do. Do we have government in places that are responsive to people’s needs beyond thinking about these term limits or no term limits? Term limits have nothing to do with democracy.”

He then brought up the red herring of Singapore’s Lee Kuan Yew, leading his anomalously small nation into anomalous wealth by anomalous rules that anomalously worked for 32 years.

It’s the sign of a strong democracy that a strong leader is not made into a ruler, that Caesar remains merely, and temporarily, first among equals rather than a god among men.

But as always, one of the biggest problems with democracy is the people, and the people of Sri Lanka really like Rajapaksa.

“Rajapaksa president again? I wish,” says Suraj, a 33-year-old odd-jobber who lives in a small village an hour south of Kandy. He voted blue as well, mostly because of the former president. Suraj was born and grew up during the war, and was a young man when the tsunami hit in 2004. Rajapaksa represents a rare point of light amid decades of darkness.

Suraj is part of what Sri Lankans are calling the floating voters, mostly young people who, unlike their parents, have no particular party allegiance. And though they could be the harbinger of a new era in Sri Lankan politics, hidebound till now in generations of ruling families who have formed a political class, they could also create a serious problem: Many, possibly most of these floating voters, whether they voted for green, blue or any of the other couple of dozen parties, are Rajapaksters. I met another young man in Colombo, Amila, 28, who carries a picture of Rajapaksa in his wallet, despite voting for the socialist People’s Liberation Front of Sri Lanka.

Suraj thinks most of the blue politicians are corrupt. His blue vote was a vote for Rajapaksa.

If Sri Lanka is to avoid the sort of term-delimiting talk currently tearing through central Africa, it will be because it has one thing Burundi and Rwanda do not: a president like Maithripala Sirisena.

Sirisena is as close to Rajapaksa’s opposite as you can get. Born into a farming family, he’s modest to the point of being dull. But since taking office in January, he’s been doing some quietly remarkable things. Like devolving presidential power to parliament, and imposing new presidential term limits that, in addition to being the sine qua non of republican democracy, also happens to ensure Rajapaksa will not be coming back. At least not as president. At least not for now.

Most strikingly, in the days leading up to the election, Sirisena wrote an open letter to Rajapaksa saying that, even if the blues did win, he would not, under any circumstances, be appointing him prime minister, listing more than half a dozen other UPFA members he might choose instead.

As it happens, the greens and their elephants won, and Ranil Wickremesinghe will become prime minister for the third time since 1993. Potential democratic crisis averted.

Rajapaksa turns 70 at the end of this year, and there is no indication that his aura is transferable. This means all Sri Lanka has to do is stave off its preference for hero worship over democratic process, the known over the unknown, the exciting over the workaday for five more years, a decade tops.

People like Trilanth may hold the key to that decade and beyond. Half Sinhala and half Tamil, Trilanth, 20, is another floating voter. Coming from a traditionally green family, he is also a Rajapaksa fan. “He got the job done,” he says on the veranda of his middle-class home in a prosperous suburb a few kilometres north of Colombo. But he has one important caveat that implies people are looking beyond the man to the men and women who would govern with him. “Everyone has to thank Rajapaksa for saving the country,” he says later by Whatsapp. “But I’ll illustrate with an answer I got from a man in a rural county who was also a Rajapaksa supporter. He told me, ‘Son, if a man saves a girl from drowning, that doesn’t mean he can rape the woman.’”

But maybe the best case for a new, stable Sri Lanka is Jaganth back at the elephant orphanage. His main reason for voting blue was not the war or the hero, but benefits. When the greens took over in 2002, they abolished his pension rights. But when the blues got in two years later, they restored them. Fundamental, but simple, and leagues away from the martial rhetoric and possibly criminally effective acts on which Rajapaksa built his fame. It’s the stuff on which boring, peacetime democracies are built. DM