Madam President? The deceptive campaign to find Ms Number One 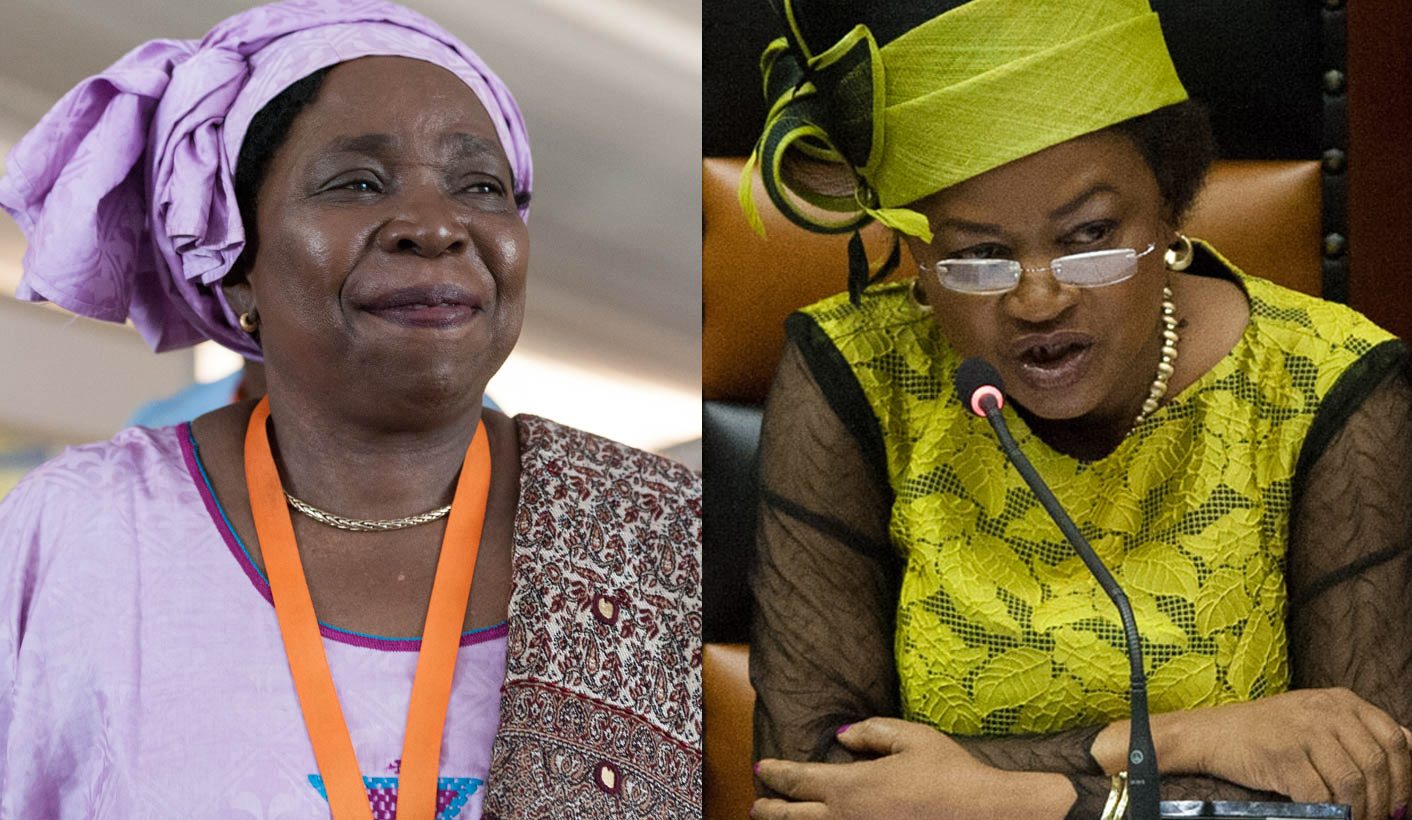 Twice last year, President Jacob Zuma said South Africa was ready for a woman president and quite enigmatically hinted it could happen anytime. “It’s a matter of time and I think it’s not far away,” Zuma said last August. Now the issue has picked up momentum since the new ANC Women’s League president Bathabile Dlamini declared that the organisation intends to campaign for Zuma’s successor to be a woman. This does not mean, of course, that the league will go in search for the best woman for the job and mount a Hillary Clinton-style campaign behind her. It will all boil down to the game of slates and horse-trading between ANC structures. By RANJENI MUNUSAMY.

Anecdotal evidence suggests that the most popular woman in a position of authority currently is Public Protector Thuli Madonsela. She enjoys tremendous respect and admiration because of her courage and chutzpah, as well as her determination to pursue investigations against the politically powerful regardless of the pressure she faces. City Press on Sunday ran a sample of messages they received from readers responding to an article about the prospect of a woman president. Out of 18 messages they ran, 14 were in support of Madonsela for president. Judging by the praise and accolades she receives, that sample appears to be quite reflective of her true popularity.

As exciting as the possibility may be for the straight-shooting, proficient, incorruptible Madonsela to be South Africa’s next head of state, the likelihood will be very slim. At least not under the current proportional representation electoral system. South Africa’s electorate does not vote directly for a presidential candidate so in order to be on the ballot paper, Madonsela would have to represent one of the political parties. The possibility of her becoming leader of one of the existing parties or forming her own is remote. And she has already declared that she wants to work in the field of administrative justice when she retires as public protector, and harbours no political ambitions.

Besides, Madonsela is not a politician. She is wired differently and is too prim and proper for that murky world. Imagine her heckling in Parliament? Or going toe-to-toe with Julius Malema. Or toyi-toying on the stump? She would need a squad behind her to do all that. Who exactly would that be? Madonsela is really the star of her own show. And not cut out for the political scrum.

So now that we have dealt with that pipe dream, let’s consider the real possibilities in the ANC, which is likely to remain the ruling party in the next elections.

In the ANC, discussions on succession are still closeted. This is because premature talk on leadership succession is considered to be taboo and also because the factional divides are not quite clear yet. These divides cut through provincial structures and usually determine the leadership slates. The national general council in October might reveal allegiances or these might remain under wraps until closer to the ANC’s 54th national conference in 2017.

So far, only the Gauteng province has given an indication that they intend backing Deputy President Cyril Ramaphosa to be the next ANC leader. But at the moment, Ramaphosa is the default candidate by virtue of his position as the deputy leader. As things stand, the only real challenge he could face for the ANC presidency would be from a woman leader. All the other names being tossed about the rumour mill – Gwede Mantashe, Zweli Mkhize and Jeff Radebe – would not have the requisite support to go against Ramaphosa. Besides, for Mantashe and Mkhize in particular, this is a long-term game and for now it would make sense to shift up the ladder in the top six rather than reach for the big prize.

While the names of African Union (AU) Commission chairperson Nkosazana Dlamini-Zuma and Baleka Mbete have been mentioned before as contenders for the top job, they now seem to be drawing support from a politically powerful camp. The “premier league”, as they have been dubbed, is a group believed to be close to President Jacob Zuma and led by the premiers of the North West, Supra Mahumapelo, Mpumalanga, David Mabuza, the Free State’s Ace Magashule and former Gauteng premier Nomvula Mokonyane. They were lobbying hard at the recent ANC Women’s League (ANCWL) conference for leaders who would back a woman president.

Of course they didn’t do it because they are ardent activists for the feminist movement or because they believe there are no worthy male leaders in the ANC. This was the same group that a few months ago were proposing that Zuma stay on as ANC leader. What they are interested in is preserving their own power networks in their respective provinces and do not want the next ANC leader to overturn the apple cart that feeds the patronage rings.

While Ramaphosa has been treading water as deputy president, he is unlikely to allow the free-for-all feeding spree to continue as president. For the Zuma acolytes, the fear is also that Ramaphosa might purge some of the dead wood weighing down progress.

So what the “premier league” is looking for is a Trojan horse – a candidate they can control, who can draw mass support in ANC structures to defeat Ramaphosa and who will be beholden to the current leadership network to rally support.

And so this deceptive campaign for a woman president now has momentum, thanks to the backing of the ANCWL, and hyped up by the Woman’s Month racket.

While there are several women in the ANC national executive committee who have the pedigree and seniority to be president, the field appears to be narrowed down to Dlamini-Zuma and Mbete. The trouble for the Zuma camp is that Dlamini-Zuma might not be as accommodating of their plans to use her as a proxy as she is very much her own person, with her own aspirations and legacy to look after. They will also remember, with some trepidation, that in 2007 Dlamini-Zuma declined nomination on the Zuma slate and stood on the Mbeki slate against her ex-husband.

The hope is now that she will be reliant on the Zuma camp to take on Ramaphosa and will therefore be more co-operative.

The other candidate, Mbete, is likely to be far more compliant and is already in the succession chain as ANC chairperson. However, Mbete doesn’t have a mass constituency and is not as popular as Dlamini-Zuma. And judging by her clumsy track record as Speaker of Parliament, Mbete’s candidacy is likely to go down like a lead balloon outside the ANC. Dlamini-Zuma on the other hand, has excelled in her ministerial posts, and is a recognised and respected internationally for her leadership of the AU Commission.

What would make most sense for Dlamini-Zuma, and leave her reputation unsullied by a bruising battle with Ramaphosa, is to contend for the position of ANC deputy president now, probably against Mantashe, and wait her turn to be president. But if Ramaphosa wants to serve two terms, the wait might be far too long for Dlamini-Zuma, who will be 78 in the year 2027 when she would have to start her term in office.

The fact is that none of the potential candidates can decide the outcomes. The game plans will be defined by the various ANC factions. Their destinies will be dependant on the strength of the structures behind them and the composition of the slates they find themselves on.

There can be no campaigning or manoeuvring on their part. And as previous factions around Thabo Mbeki, Kgalema Motlanthe and Tokyo Sexwale discovered, counting their chickens can be deadly.

If a Madam President will emerge in 2017, it will mark a great moment for the cause of gender equality the advancement of women in our society. But it does not mean that the men controlling the power networks will surrender control to her. If anything, the intention would be to control her too. So while the psychological effect of a woman head of state would be tremendous, practically it might not translate into more women in positions of power, greater focus on equality where it matters or a shift in the way the country operates.

That will be dependent on the strength of character and leadership skills of the next Number One, whether it is Mr or Madam President. DM