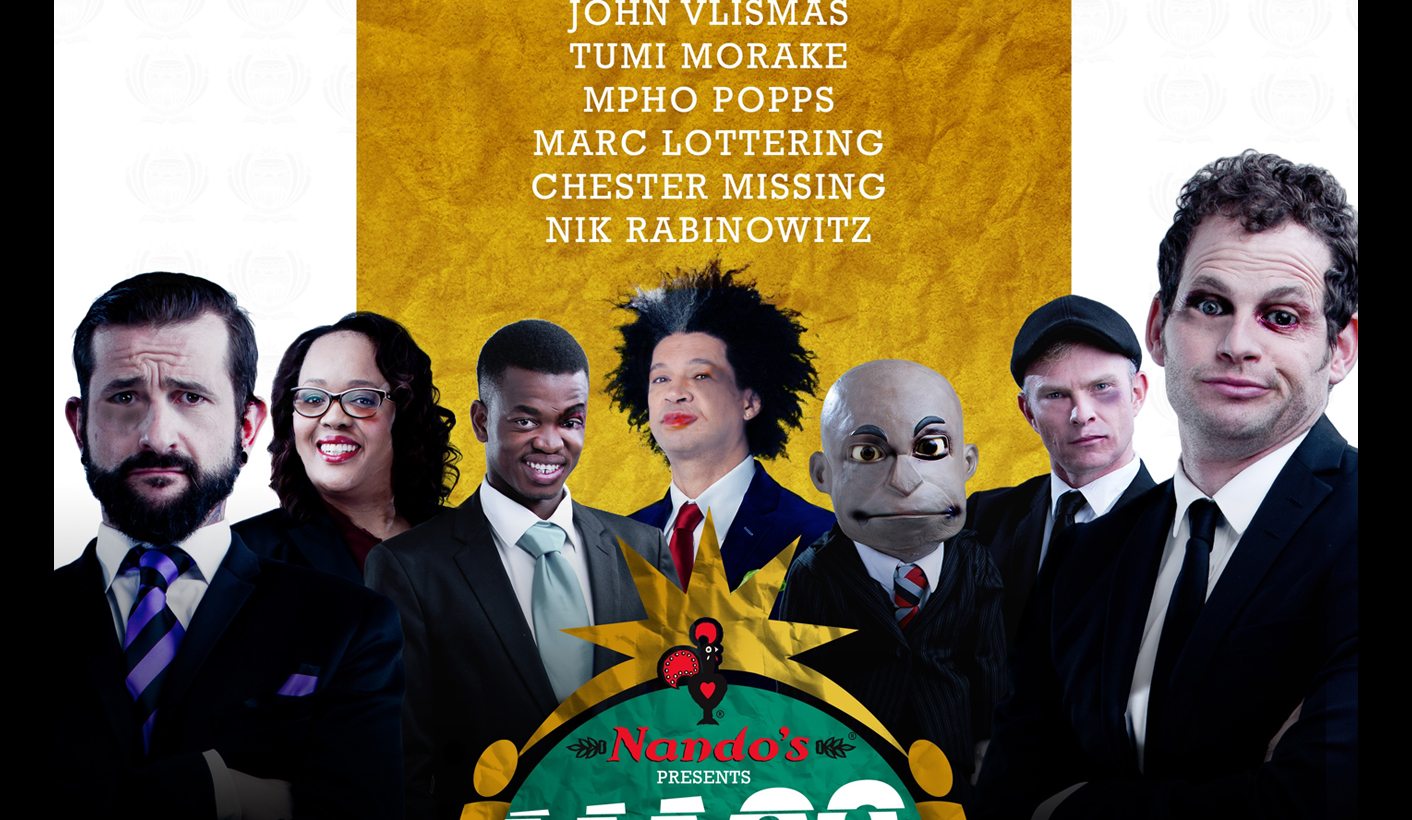 Foul-mouthed and ever funny John Vlismas is one of seven comics who present their own government line-up in the Mass Hysteria comedy show now on at Montecasino, before heading to Cape Town. The annual event aims to deliver comedy that’s as funny as the ludicrous antics of our politicians, and the Joburg line-up does it brilliantly. There’s not a weak link in the chain. By LESLEY STONES.

It’s been too long since I’ve seen comedian John Vlismas perform. He was just turning 40 then, and he wasn’t happy about it. And an unhappy Vlismas is quite a sight to savour.

South Africa’s most foul-mouthed comic (that’s a made-up statistic, but I doubt anyone will contest the title) is also one of our funniest. I don’t think he swears for any deliberate shock-and-horror comic effect, I suspect he’s loveably vulgar around the clock. Loveable may sound like the wrong description for this tattooed, wiry, pit bull of a man, but he’s just so funny and so damn accurate that you have to adore him.

Vlismas is one of seven comics appearing in the Mass Hysteria comedy show now on at Montecasino, which will move to Cape Town soon. The event runs every year when his company, Whacked Management, presents a government line-up of its own. The aim is to deliver comedy that’s as funny as the ludicrous antics of our politicians, and the Joburg line-up does it brilliantly. There’s not a weak link in the chain, from the opening warm-up act of Alfred Adriaan to the individual acts each giving us 20 minutes or so of comic excellence.

Vlismas was on fire as the Minister of Non-Communicative Diseases, which gave him free rein to lay into the deteriorating state of his body, fat people, smelly hippies, Christians and Muslims. Well, religion is a kind of disease, I guess.

Part of his success is that he loathes everybody equally, and he talks with outrageous brutal honesty. But it’s so funny that you can’t take offence. If you did, he’d think it was a job well done.

Now Vlismas is 42, and he’s pissed off because he’s got so old when he expected to die at 27. “I’m a 42 year old psychopath” he claims, and nobody disbelieves him. Forget mass hysteria, Vlismas is a weapon of mass destruction. If I cried it was only from laughter.

Tumi Morake, the Minister of Ben 10s, YOLO and Homesteads, gave a lovely, homely act based on being a mum and a working woman. Thankfully not the dull mumsy stuff lots of women seem to think is interesting. Three kids haven’t dulled Morake’s wit. They haven’t damaged her body either, with the physical inconvenience of delivery annulled by whipping them out ‘through the sunroof’ she jokes. Her hips are inspired by the government, she adds – all promise and no delivery.

In between the comics were gaudy graphics and a couple of filmed sketches to set the tone. Then came smooth Nik Rabinowitz, the Minister of Shark Infested Water Affairs.

Rabinowitz has been travelling of late, giving him lots of fresh material to work with. He peppers his act with a wide range of very convincing accents and fluent Xhosa, and he’s debonair as well as enormously funny. This is great observational, anecdotal humour, and the on-off parole of Oscar Pistorius gave him plenty of fabulous material to work with.

Mpho Popps Modikoane as the Minister of Television and Gratuitous Adverts was another delight. His act has developed beautifully and he confidently combines physical and verbal comedy to charm the audience as well as entertain them.

Also in the line up is Chester Missing, naturally playing the Shadow Puppet Minister. That allows his ventriloquist owner Conrad Koch to talk about whatever he likes. I’ve never been a huge Chester Missing fan, but it was a solid act with enough laughs to keep the momentum going. Marc Lottering ended the show as the Minister of the Cape, Retail Therapy and Statues, and he managed to turn a burglar at his home that morning into part of the act, laughing through the trauma. He’s consistently funny and another of the country’s strongest comics, but on this evening, Vlismas was the minister I’d vote for. DM

Mass Hysteria runs at Montecasino until Sunday then moves to Cape Town’s Artscape from October 14–25.