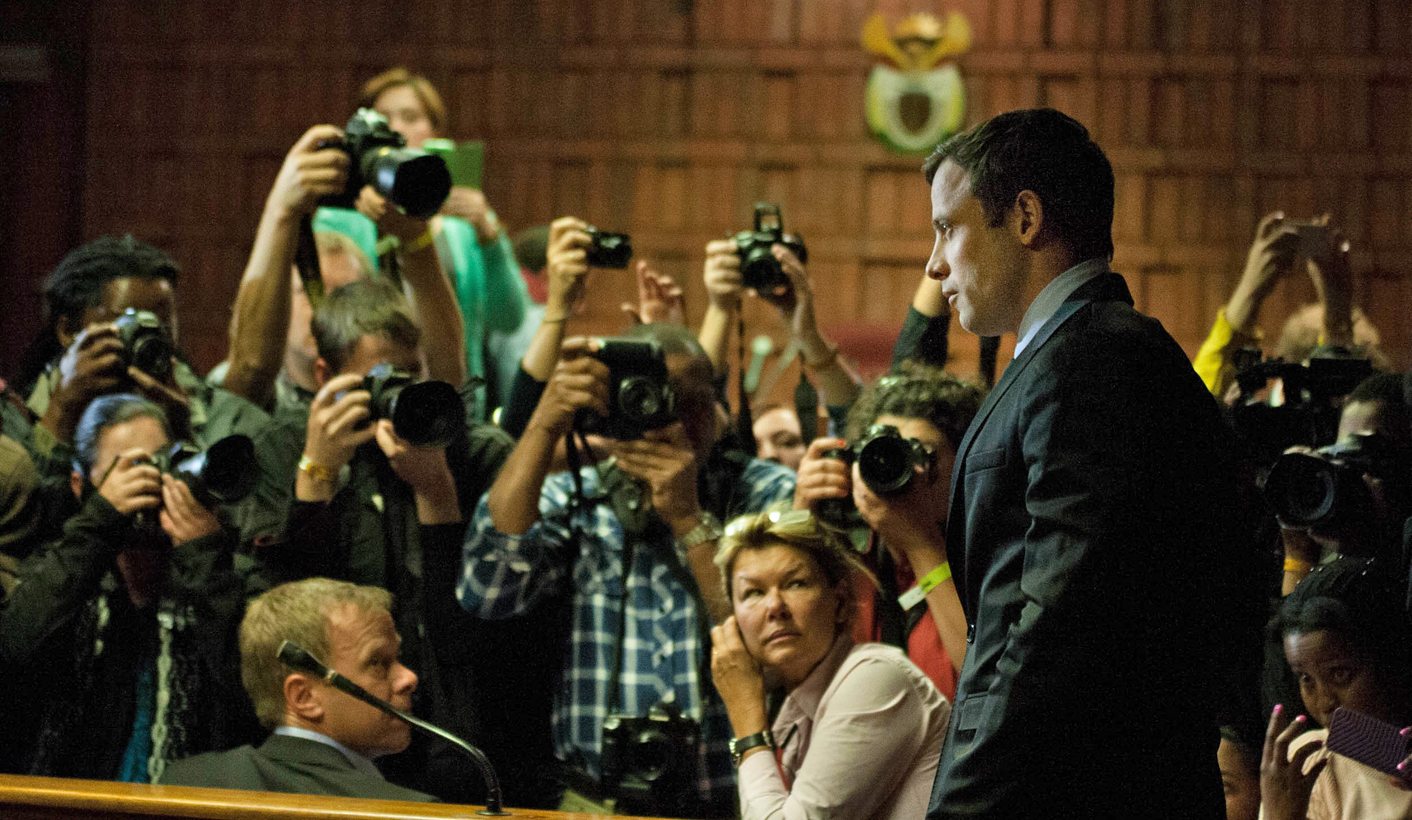 Even for those who believe Oscar Pistorius should have received a much longer sentence for the killing of Reeva Steenkamp, the sudden decision to review his parole two days before his advertised release date has raised some eyebrows. The justice minister’s actions may be within the strict letter of the law, but the whole scenario poses some difficult questions. By REBECCA DAVIS.

Masutha says the parole board made a mistake when it said Pistorius could be released after serving one sixth of his sentence. The piece of law upon which the minister’s argument relies states that someone sentenced to imprisonment “shall serve at least one sixth of his sentence before he may be considered for placement under correctional supervision”.

It’s the word “considered” that Masutha finds crucial here, while another interpretation is simply that an inmate can’t be placed under correctional supervision until they have served one sixth of their sentence.

The justice minister, in other words, says the parole board should only have begun considering whether to place Pistorius under correctional supervision on Friday, the date which marks the completion of one sixth of his sentence. The parole board, on the other hand, had previously decided that Friday was the date on which Pistorius could be released into correctional supervision.

Masutha’s, says University of Cape Town senior law lecturer Kelly Phelps, is a “technical interpretation” which seems not to have been tested before.

One thing seems clear, though: it’s not the invariable interpretation of the law.

“Releases (from prison) standardly happen around the one sixth mark,” Phelps told the Daily Maverick on Thursday. “Parole boards have been applying this provision frequently.”

Phelps describes it as “quite stark” that it has suddenly become a “vexed issue”.

Even if Masutha’s interpretation is technically correct, then, it means parole boards may have been consistently mis-applying the law. What should happen to those other cases?

The timing of Masutha’s intervention is also of interest. The way the story goes is: the Progressive Women’s Movement of South Africa filed a petition on Monday opposing Pistorius’s release. Masutha met with them, considered the petition, scrutinised Pistorius’s case and realised the parole board had erred.

“Two days ago I received representations from an NGO (non-governmental organisation) representing a women’s advocacy group requesting that I review the decision of the parole board to place him on parole with effect from tomorrow … I thought that I should look at the decision fully by going back to the decision itself, when it was made, to look at the act and the relevant provisions under which the decision was made, as well as look at the profile itself which informed their decision … I came to the conclusion, and having received advice from counsel to confirm this, I came to the conclusion that the board had erred by sitting and considering his application for parole before the minimum period that he is required to serve.”

The first and most obvious question this raises is why the decision to place Pistorius under correctional supervision was only rigorously examined a few days before the athlete was due to be released.

“Why are we deciding what his eligibility for release is two days before the man is due to leave prison?” asks attorney David Dadic, who has followed the trial closely.

The date of Pistorius’s release has been widely advertised for close to two months. Given the level of international scrutiny of the case, it’s little short of bizarre that this was all so last-minute.

“To come up with this at the final hour,” says Phelps, “leaves one feeling that they’ve been scouring the books.”

The second question concerns the circumstances under which Masutha received the petition. In several interviews since he announced his decision, Masutha has said: “I ordinarily do not peruse petitions.”

Why, then, did he peruse this one?

When he described the Progressive Women’s Movement of South Africa (PWMSA) as an “NGO representing a women’s advocacy group”, he may have been technically accurate, but there’s more to it. Though their website no longer exists, the PWMSA appears to have been established by the African National Congress’s (ANC’s) Women’s League about 10 years ago.

From the ANC’s website: “In October 2005 during one of its meetings the national executive committee of the Women’s League decided it would be ideal if South African women to (sic) formalise a Progressive Women’s Movement in 2006.”

Though the PWMSA says it is an umbrella body for 80 organisations, including religious groups, its ties to the ANC Women’s League are clear. PWMSA convenor Jacqui Mofokeng (no relation to the former Miss South Africa), the Gauteng head of the ANC Women’s League at the time of the Pistorius trial, religiously attending court in the company of Reeva Steenkamp’s family.

Mofokeng is a political figure: she previously served as deputy chief whip in the Gauteng legislature. When Masutha says he was paid a visit by women’s rights advocates from an NGO then, that’s true. But it’s also true to say that he was paid a visit by an old ANC comrade. Did that help secure the attention of the minister, given his acknowledgement that he never usually looks at petitions?

It’s also worth noting that the PWMSA’s petition did not point out the technicality of law on which Masutha would proceed to base his parole suspension. It merely said Pistorius should be kept behind bars for the duration of August, because it’s Women’s Month. It seems to be of extreme symbolic value to the PWMSA that Pistorius be kept locked up until August 31.

Mofokeng told journalists: “If he was released any other month, we wouldn’t have a problem”.

Leaving aside the obvious point that the PWMSA does not seem to mind whether other killers or rapists of women are released in August, this magical thinking around Women’s Month is downright dangerous. What it suggests is that women should be granted special handling for 31 days in August, but for every other month might resign themselves to substandard treatment. September? Oh, that’s fine for Pistorius’s release. Not August, though. Not in our special month.

“It’s time for the Justice Department to show us what they can do,” Mofokeng told SAFM. “We are not ruling out that the minister can do something for the women of this country.”

And the minister appears to have obliged.

This is not the first time that we have seen high-level intervention in the Pistorius case.

“The most stark example was when the commissioner of correctional services himself testified in the trial,” says Phelps. (Commissioner Zach Modise testified to the prison conditions Pistorius could expect to experience.) This would, of course, be virtually unthinkable in an ‘ordinary’ prosecution.

Masutha has had to preside over some hugely contentious decisions over the course of his relatively short tenure. One of these was the parole of Vlakplaas commander Eugene de Kock, which Masutha deferred for another procedural reason: in that case, that the victims’ families had not been consulted.

Parole boards are evidently not infallible. In the case of the Waterkloof Four, two were ordered back to jail in June 2013 following “gross wrongdoing” by the parole board which okayed their release.

If the justice minister has identified an error in the way in which parole law is routinely being applied, it’s to be hoped that this will be corrected across the board.

Many of us would be happy to see Pistorius stay behind bars for a lot, lot longer than 10 months. But the idea that political forces – however muted – might have a role in determining how long people stay in jail is one that should cause us all some discomfort. DM