NGC discussion documents: The ANC’s theory of everything 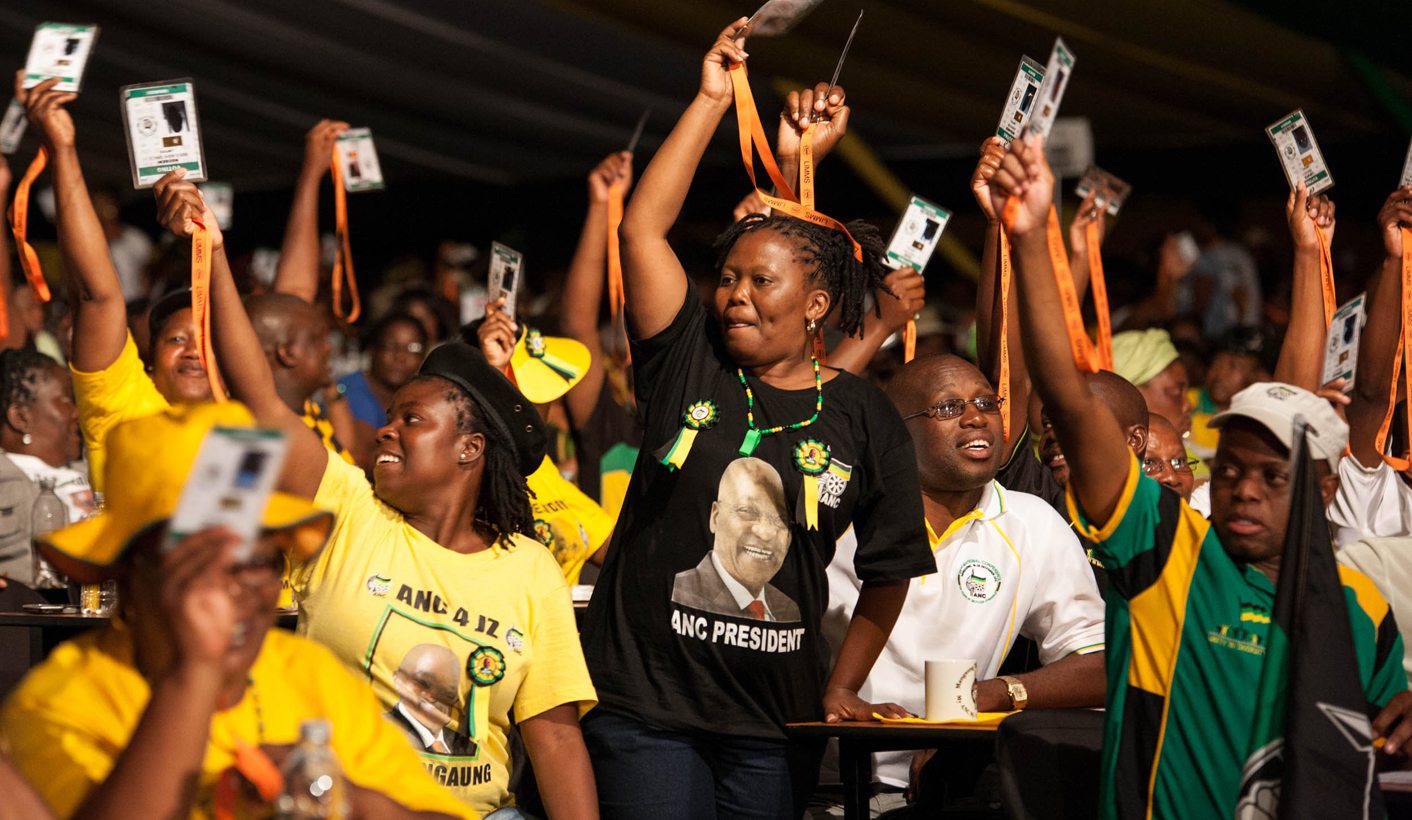 In two months, 3,000 delegates will gather in Midrand for the ANC’s midterm national conference to assess how well the party is running South Africa. On Monday the ANC released the discussion documents that will frame the deliberations at the national general council (NGC). From the economy to social transformation to the “forces” challenging the “capability of black people to govern” and the legitimacy of the state, it is the ANC’s take on the state of our nation. The nine documents provide fascinating insight into what the ANC perceives as trouble spots – sometimes they make you laugh out loud and when it comes to the renewed threat of media regulation, you may shriek in horror. By RANJENI MUNUSAMY.

You never quite know what to expect at ANC national conferences. In 2012, for example, the midyear policy conference was marked by internal turbulence caused by the beginning of a support campaign around then Deputy President Kgalema Motlanthe and agitation over proxy issues from forces opposed to President Jacob Zuma’s continued leadership. Five months later, at the ANC’s 53rd national conference in Mangaung, all that fizzled out and it was a virtual walkover by the Zuma camp on policy issues and leadership elections.

So who knows whether the delegates attending the ANC NGC from 9 to 12 October will be in a rebellious mood or whether they will happily chorus along with the “good story to tell” narrative? The NGC discussion documents make sufficient admissions about the ANC’s weaknesses and failures so that the delegates do not accuse the leadership of being in denial, but also does an admirable job laying the blame on other “forces” to sidestep culpability.

The documents acknowledge that despite increased public investment and other interventions, economic growth remains too low and job creation insufficient. The national electricity shortage is identified as a key constraint to achieving economic growth targets. What the documents do not do, however, is provide anything new to halt the downward economic spiral or confront the reality of possible austerity measures if the trend is not reversed.

The ANC’s economic transformation committee head Enoch Godongwana says there shouldn’t be concerns about haircuts just yet as what may be needed is reprioritisation in spending. This is echoed in the discussion on document on the Balance of Forces.

“Given the paucity of resources available in the fiscus – in this current period of low economic growth and a huge budget deficit – it will be necessary to ensure proper prioritisation and sequencing of state interventions. It is also necessary to find creative ways of drawing in the private sector in realising some of the objectives such as urgent infrastructure projects.”

The documents acknowledge that state owned enterprises (SOEs) are a major problem area and need to be attended to as a matter of urgency. The proposals to improve their efficiency include clear roles and responsibilities for boards and executives, and the need to appoint competent board members and executives. So just putting in place the basics to ensure good governance. The documents do not examine why this is not being done and the political interference that has brought critical companies, like Eskom, to its knees. The head of the ANC’s social transformation committee Lindiwe Sisulu says South Africa had over 700 SOEs and focus is only on the ones in difficulty. She said the ANC was being “introspective” in its documents and confronting all its problems.

The ANC has an interesting range of issues it focuses on as problem areas. For example, it says a “worrying trend” is the “tendency for leaders of various sectors of society, especially in the political arena, to seek judicial resolution for matters that can be managed through other channels”.

Even Chester Missing gets a mention.

“These range from quarrels with a puppet and the singing of songs, to legal challenges against constitutionally-valid administrative actions by the executive.” While it does not give examples of these “constitutionally-valid” actions, the flouting of a high court order on Sudanese President Omar Al-Bashir and the refusal to implement the recommendations of the Public Protector’s report will be important test cases on whether legal challenges are in fact frivolous.

The document goes on to say: “On the one hand, such ‘lawfare’ can suck up the judiciary into the maelstrom of day-to-day societal management and thus unnecessarily splutter it with mud. On the other, repeated attempts of this kind, into which huge resources thrown, do suggest that some privileged sectors of society seek to undermine the popular electoral mandate.”

On the issue of corruption, its is stated that when there is “repetitive poor management of allegations of corruption and patronage within high leadership echelons, the legitimacy of the state and the polity as such are undermined”.

(Note: poor management of allegations of corruption and patronage, not the occurrence of these)

The document further says “a general impression of systemic corruption has been created, ranging from unsavoury developments in state-owned enterprises, strange machinations within security and tax authorities, to unconvincing responses to admonitions for accountability by relevant constitutional bodies”.

It is somewhat comical that the ANC thinks the impression of corruption is created by “unconvincing responses” to demands for implementation of the Public Protector’s recommendations rather than the fact that R246 million was spent on upgrading the president’s residence.

The ANC believes there is a “strange alliance” between the Right and Far Left forces in society. It says the persistence of poverty and inequality has led to the fraying of the “very legitimacy of the state” and a weakening sense of hope and optimism. “As a consequence, in addition to stirrings of discontent among the motive forces of change, forces opposed to transformation – including rabid racists who had gone into hibernation – are emboldened to use unsavoury developments in government structures as an excuse to question the capability of black people to govern and to challenge the very legitimacy of the state,” the document states.

Further on, it says through issues such as corruption and e-tolls, opposition parties, particularly the Economic Freedom Fighters and the Democratic Alliance, believe they have “drawn blood and can inflict further blows to undermine the ANC”. “The disruptions in Parliament and some legislatures, campaigns to occupy land and others that border on illegality, are all meant to, or do in fact have the effect of, undermining the legitimacy of the ANC, of the government and ultimately of the state as such.”

The media and communications will be a major issue of discussion at the NGC as the ANC seems to believe a misdirected, agenda-driven media is responsible for its battered public image.

The document says the pursuit of profit affects the platforms of public discourse. “Juniorisation of newsrooms, homogenisation of content, anti- government oppositionism, a lackey mind-set towards powerful forces in society (economic and political), and a herd mentality in dealing with news events – all these undermine the depth and transformative relevance of media content.

“This also plays itself out in social media. Combined with this is the tendency across all platforms of intellectual and public discourse to repeat ‘Western truths’ without much critique.”

In the document on Communications and Battle of Ideas, the ANC says the “quality of journalism continues to deteriorate with increasing signs of gutter journalism”.

So the threat of greater regulation of the media and a media appeals tribunal is flagged again. The document says the ANC still believes that the existing self-regulatory mechanism (press ombudsman and press council) remains ineffective and needs to be strengthened. “Therefore there is still a need for a rigorous debate and resolution on the establishment of accountability mechanisms that are independent and provide for an independent appeal mechanism.”

This discussion should be pursued and led through a parliamentary inquiry, the document says.

When it comes to communications, the ANC wants to engage in combat mode. “The war of ideas must be fought like a real war,” the discussion document says.

And therefore there needs to be training for battle. “There is a need to train ANC communicators at all levels of the organisation and continuously train all deployed cadres in media handling. ANC cadres deployed in government must be obligated to attend media coaching and training.” This, of course, is not a bad idea as much of the ANC muddled messaging and clumsiness in dealing with the media has to do with lack of training.

The party says a “strengthening the ANC’s own network of sympathetic circle of analysts and journalists is important”. There is no detail of who these are and how the “network” should be “strengthened”.

Over the next two months, there should be a buzz in ANC branches as the documents are interrogated in preparation for the NGC. Considering the tough economic conditions and the approach of the local government elections next year, this conference will be crucial in defining the line of march for the ruling party. But if the discussion documents are anything to go by, a regurgitation of the same old rhetoric is more than likely. DM