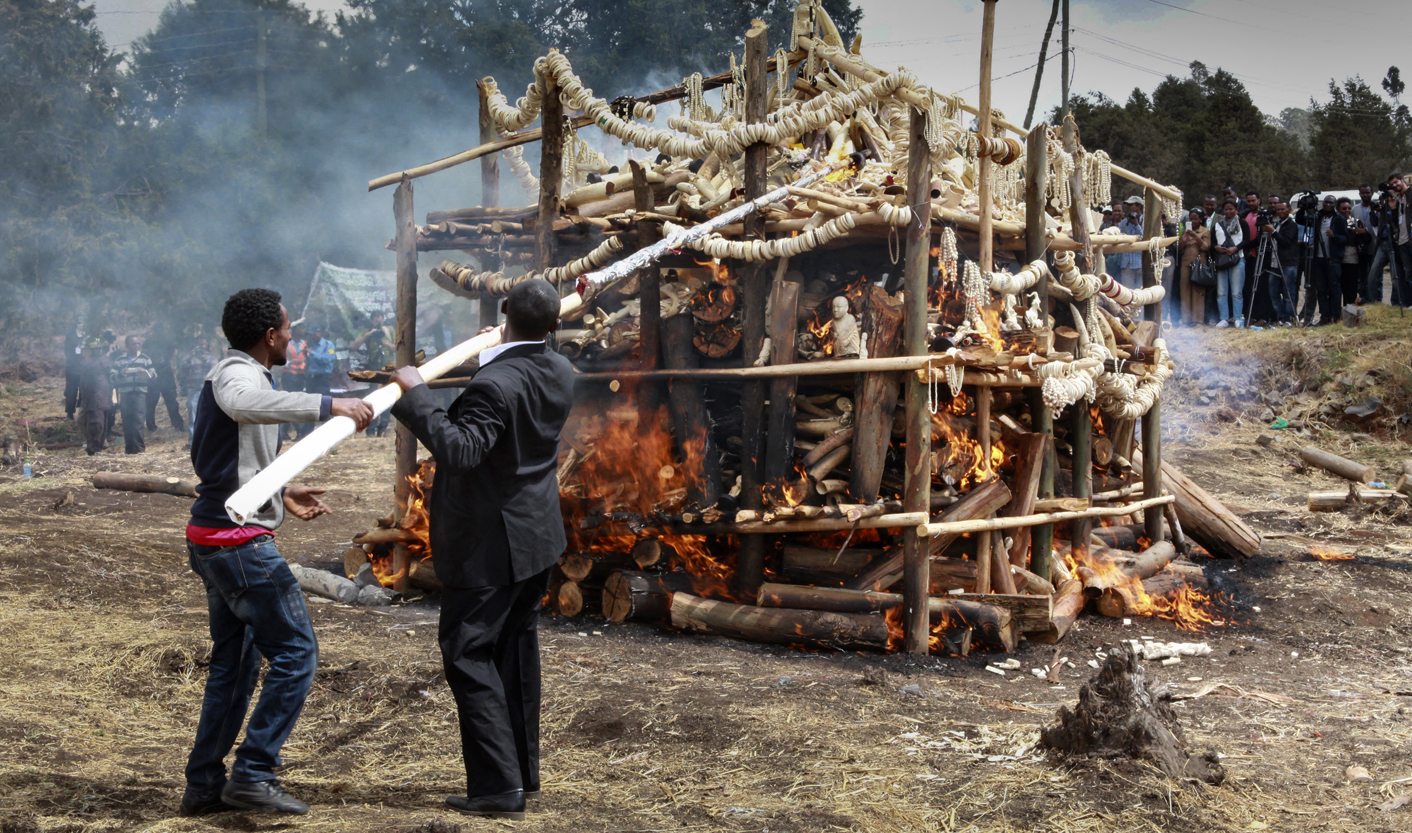 If you want to save elephants, don’t legalise the international trade in ivory. That’s the message of a major research paper published to coincide with World Elephant Day on August 12. The paper, by South African Institute of International Affairs researcher Ross Harvey, says that instead carefully targeted demand-reduction programmes in Asian consumer countries need to be ramped up and poaching prevention strategies in elephant range states in Africa improved, followed by a ban on all domestic ivory trading. By ANDREAS WILSON-SPÄTH.

While their natural habitat is being destroyed by human encroachment, deforestation and the effects of climate change, Africa’s elephants are being slaughtered in devastating numbers.

Criminals who sell elephant tusks on the illegal international ivory market are believed to have killed about 100,000 animals between 2010 and 2012 alone. During the past five years the poaching rate has exceeded the natural rate of replacement through new births, resulting in population declines across the continent.

While West and Central Africa have been most severely affected until now, the international crime syndicates orchestrating the carnage are increasingly moving their operations to East and Southern Africa, where populations “have also been declining at an unsustainable rate since 2009”.

In his study, South African Institute of International Affairs researcher Ross Harvey identifies the three biggest threats to the continent’s elephants as:

Resolving the current poaching crisis is a complex problem that requires a multi-pronged policy approach. After analysing the current situation and developing a game theory model to evaluate the most effective responses, Harvey concludes that conservation agencies should direct most of their available capital and effort into two areas: immediately and simultaneously reducing the demand for ivory in Asian consumer countries and improving strategies to prevent poaching in Africa. According to the model, these measures are likely to provide the best conservation return on investment.

Unlike some other economists who recommend legalising the international commercial trade in elephant ivory, which has been banned under the Convention on International Trade in Endangered Species of Wild Fauna and Flora (Cites) since 1989, Harvey argues that this would potentially drive up prices and increase poaching by stimulating demand and removing the stigma effect which currently stops many potential consumers from buying ivory products.

Similarly, two Cites-approved ‘one-off’ sales of ivory to Japan and China from the official stockpiles of Southern African countries in 1997 and 2008 have enhanced demand by sending confusing signals to the market, suggesting that ivory could be legally traded at an international level once more. Harvey proposes that Botswana, Namibia, Zimbabwe and South Africa join the remaining African countries which are home to elephants by moving their populations from Cites’ Appendix II to Appendix I, which would rule out such sales.

Harvey notes that in order to be effective, demand reduction programmes must go beyond simplistic consumer awareness and information campaigns and take into account the various segments of this differentiated market.

Particular emphasis should be given to eroding demand among two important sections of the Asian market – those consumers who buy ivory as an inflation-proof form of investment and those who purchase it as a status symbol, often within an established gift-giving tradition among elites. Separate and tailor-made attention also needs to be paid to the lower end of the market which tends to involve smaller ivory trinkets bought as aspirational luxury items.

In this context, “helping consumers to make the connection between their consumptive behaviour and elephant population viability is vital” and such a targeted appeal to these consumers “should spearhead the strategy to reverse the elephant crisis”.

In a further, radical proposal, Harvey suggests that elephant range states across Africa should support demand reduction efforts by destroying their existing and accruing stockpiles of ivory in a continuous and coordinated manner, thereby sending an unambiguous message to markets, consumers and poachers that the legal trade in ivory is over for good.

While careful thought should be given to compensating governments for potential losses incurred through such a policy, Harvey points out that “despite the apparently vast amounts of money to be made from selling stockpiled ivory, tourism revenue dwarfs these amounts over the lifetime of an elephant”.

Hand-in-hand with addressing growing ivory demand in Asia, the game theory model presented in the paper points to the benefits of reinforcing anti-poaching and anti-trafficking efforts in Africa without delay. Particular attention should be paid to new technologies, including unmanned aerial surveillance by drones and sophisticated remote sensing equipment such as gunshot indicators and satellite tracking collars.

Following an effective reduction in ivory demand and elephant poaching, Harvey proposes that a ban on the domestic trade in ivory, “especially in the largest consumer markets, is a necessary component of the strategy to secure elephants’ future”.

This would raise costs for ivory traders and consumers and reduce the widespread practice of laundering illicit elephant ivory in the legal domestic markets of consumer countries. A prohibition on domestic trade would also reinforce the stigma effect, discouraging people from buying ivory products. It would also make law enforcement easier since there would be no distinction between legal and illegal ivory – all of it being illegal (especially if the trade ban would be extended to include ivory from extinct species like mammoths which can currently be legitimately traded).

Harvey warns that making such bans effective will be challenging, particularly in countries that lack a strong legal framework, political will or the resources to enforce laws and regulations: “Rules are meaningless without compliance, which cannot be taken for granted.”

To overcome these hurdles, it is important that genuine trust is built between communities and anti-poaching authorities and that new methods of community participation are developed.

Anti-poaching incentives need to be carefully constructed beyond “simply paying rangers a better salary”. It is crucial that local communities adjacent to conservation areas derive greater financial benefits from keeping elephants alive than they would from illicit poaching, for instance through shared income from ecotourism, game-viewing and photographic tourism.

“The answer is to create conditions under which communities view the resource to be preserved as an appreciating asset.” People should be informed about the fact that living elephants have an intrinsic value and represent benefits other than obviously financial ones through the ecosystem services they provide, for example by opening dense woodlands to other species and acting as important long-distance dispersers of indigenous seeds. In this way ordinary individuals who would otherwise be vulnerable to succumbing to the lure of poaching can be helped to realise that “the value that elephants add to the habitats in which they dwell cannot be overstated”. DM

Photo: Ethiopian officials tend a blazing pile of elephant tusks and ivory trinkets is burned in a suburb of the capital Addis Ababa, Ethiopia, 20 March 2015. The Ethiopian government burned 6.1 tons of elephant tusks and ivory products confiscated over the last 20 years in an attempt to deter poaching and illegal ivory trafficking, becoming the second African nation, after Kenya, to burn its ivory stockpile. EPA/SOLAN KOLLI.