Op-ed: Dear Moegsien Williams, it is about truth 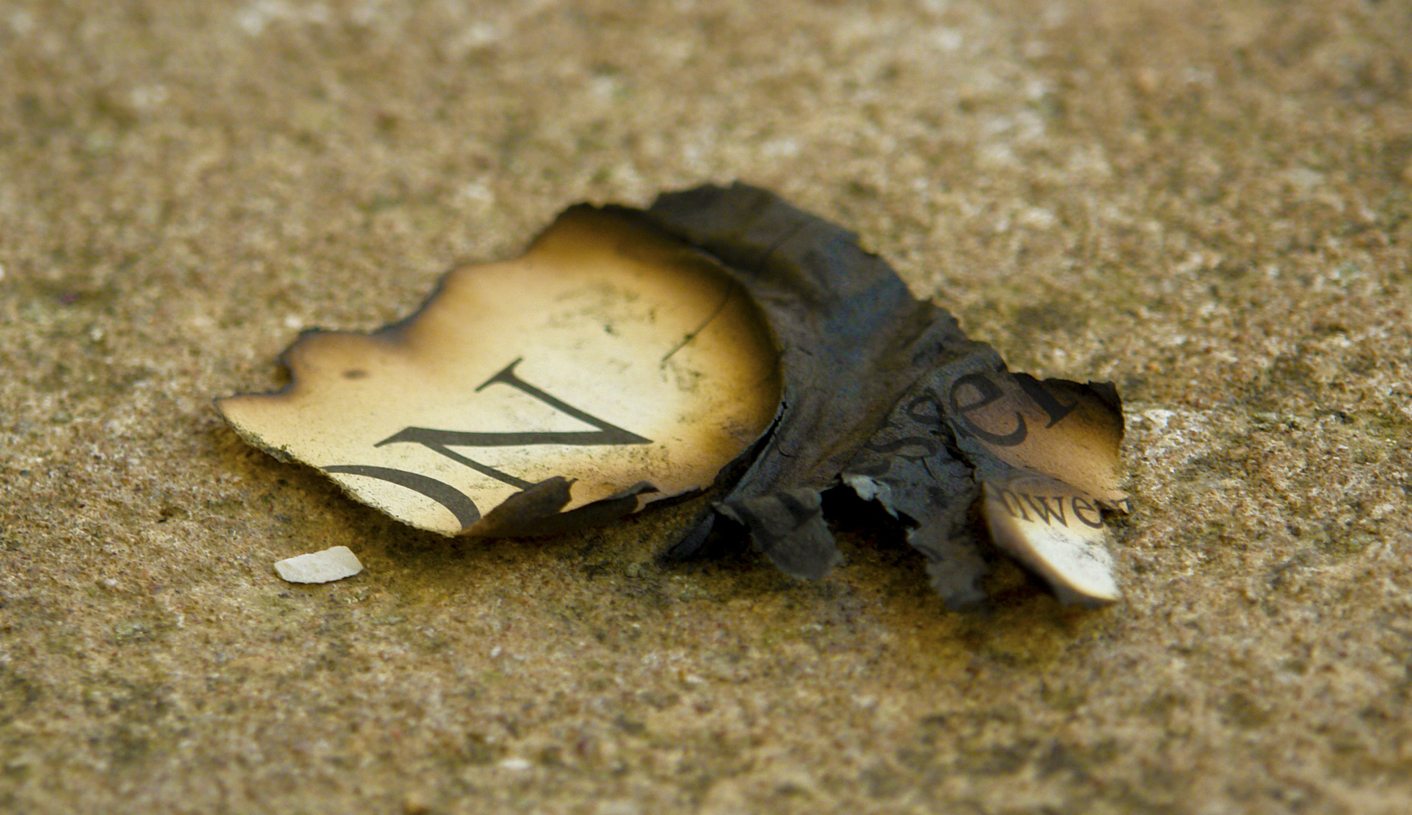 On Sunday the editor-in-chief of The New Age and ANN7, Moegsien Williams, wrote an opinion piece in the City Press newspaper, stating that "the media acts like the unelected opposition". Coming from someone in the media, during a time when once again people who should know better, like Zweli Mkhize, are calling for "patriotic journalism", he is clearly trying to influence the debate on how the media operates. Williams goes further, in suggesting that media organisations should "contribute to the country's growth and development". He makes some interesting points. The problem is, these points, and his assumptions, are mostly just plain wrong. By STEPHEN GROOTES.

Before we start, it is important to understand that Moegsien Williams has a total right to his opinion and the publication of his column by the City Press is welcome, even if it is really difficult to agree with any of his points.

Williams starts off by making several claims about the independent commercial media, suggesting that almost all of them are against the African National Congress (ANC) government. He also suggests that media organisations should try to develop “solution-driven and constructive journalism, wherein we see ourselves as part of the solution”. Williams also seems to think that if media organisations do this, if they “become part of the solution … it will go a long way towards removing the motivation for a media tribunal”. He also suggests that because of this oppositionist stance “we have lost our ability to influence policy”.

The first mistake Williams makes is to presume that media organisations have taken a deliberate decision to either be “oppositionist” or “supportive” of the government. They haven’t. In this country, radio and TV stations are regulated, and they are not allowed to take such a conscious decision. And South African newspapers haven’t taken that decision either (possibly because their readerships vote for various parties and our class system is different to that in the UK). Williams seems to think everyone working for a particular media organisation has an identical political point of view. They do not. Instead, the media organisation’s coverage is the sum of the views of the people working there.

It is also a catastrophic mistake, and Williams should know better than to enter the trap of merging various media organisations into an amorphous body labelled ‘SA media’ and then proceed to treat them as single-minded bodies with one goal, of destabilising the country and breaking the ANC’s hold on power. In reality, nothing can be further from the truth. As great as that construct is for the purpose of advancing the ‘media as disloyal opposition’ argument further, it is, unfortunately for all who embrace it, pure fiction. One does not need to spend an entire life in journalism to understand that.

And yet, that simple act of fiction, is repeated over and over again, until the old maxim of a thousand-times-repeated lie kicks in … And just about everyone takes that simple untruth as commonly accepted wisdom.

But as someone who spent his entire life in media, Williams should not follow the easy path of accepting the fantasy; a man with his CV should know better.

Williams is also just wrong when he thinks that media organisations should try to influence policy debates. That is not their main function in this democracy (although it has been in others, The Economist was started specifically to campaign against the Corn Laws, the then Manchester Guardian to provide a voice for the working class; not to mention the role of the Soviet Union’s Pravda and other communist countries’ government newspapers).

In South Africa, the two main functions of the media are to tell the truth in providing relevant and important information about current events, and to provide a platform for debate. There are other functions of course, like the various crime-fighting campaigns, but these are probably the most important.

Williams suggests it is the political stance of the media that has led to “the ruling party and its alliance partners” suggesting once again that a Media Appeals Tribunal should be imposed.

That is not the case. It is the reporting on events and scandals like Nkandla, Marikana, the Waterkloof landings and Central African Republic disaster that has led to this.

Much of the ANC make a very simple mistake during this debate. They keep suggesting they are “under attack”, that this is a deliberate strategy. Well, to take a leaf from the book of Chief Justice Mogoeng Mogoeng, perhaps they could give us some examples. Usually, when this question is posed, there is some gruff bluster from Gwede Mantashe and very little else. Because what the party views as “attacks” are actually just reports, which are generally true.

That Nkandla, corruption, and scandal after scandal about the ANC dominate today’s news agenda is not due to any inherent fault of the media. It is because that’s what the truth is. It wasn’t the Sunday Times that picked Jacob Zuma to be president. It wasn’t Business Day that decided the Guptas should fly into Waterkloof. It wasn’t the Mail & Guardian that decided to build Nkandla. These complaints are really a lament that people in the ANC did the wrong thing, and then got caught doing it.

It’s a pity that someone like Williams makes this ‘media political stance’ claim, without offering examples. In the past, when the ANC has pointed to specific examples of wrongdoing, its argument has been stronger. The ANC’s Moloto Mothapo has twice written in the Daily Maverick about the specific issues (here and here); he had strong arguments because he was pointed in his criticism and had data to back it up.

The other mistake both Williams and his fellow travellers in the ANC make repeatedly is that they both seems to agree with Number One that the ANC will rule until a certain prophet comes and that ‘the media’ hates them forever. They forget that should the government change one day, the new administration will have a media honeymoon that won’t last long. After that, corruption will creep in, scandals will develop, mistakes will be made. And before the next national elections, it too will start to complain that it’s “under attack” by the media.

Williams also talks about “constructive” or “solution-seeking” journalism. But WHAT is it? Like those who have propagated “good news quotas”, he hasn’t actually explained it. Because he can’t.

To do so would reveal the real agenda, which is to change what is being reported these days into something kinder to the ANC, no matter what the truth is. It’s a mistake many people in this debate make to think it is even possible to define “good news”; often what is “good news” to one person, is “bad news” to another. (The only thing we can say for sure is bad news is the Springboks losing to Argentina on the eve of the World Cup.)

And how exactly would one “report constructively” on Nkandla or Waterkloof anyway? By detailing exactly which laws were broken? By publishing photographs of the Public Works officials involved with big “Don’t trust this official” banners? Or consulting Wikipedia and providing a helpful definition of a “swimming pool”? WHAT is “constructive” or “solution-seeking” journalism? It would be really good if Willliams would enlighten us on that subject, but there’s an inescapable feeling that ‘constructive journalism’, as he envisages it, would have been really, really kind to Number One.

It’s also useful to remind politicians and friends, every now and then, of what news actually is.

News is not people doing what they are expected to do. It’s people doing what they’re not expected to do. News is not the 50,000 people getting home safely on the M1. It’s the two people who are hijacked on the M1. Because they were expected to get home safely. It’s the same with delivery and corruption. We expect the ANC and the government to provide services. Not to take brown envelopes and Blue Train rides for tenders. Which is why stories about corruption are news, and the delivery of services, while it should be noted, is not the big news. (Or would Luthuli House prefer us to have low expectations, and to give the current government a pass because the National Party government was corrupt AND evil?)

At the moment the ANC actually controls the regulation of the media, through its deployees at the Independent Communications Authority of South Africa, and Hlaudi Motsoeneng at the SABC. The only thing it cannot control at the moment are a few news-gathering organisations and their numbers are dwindling.

It almost feels as if Williams is trying to get the debate going about why some people want a Media Appeals Tribunal in the first place. His opinion piece comes across as ‘learn to behave, or else’ message.

But the reality is easy for all to see: Any bid by the ANC and the government to exert influence over the media must be seen for what it is: A bid to stop it from reporting the truth. As we said a few times already, Williams should know better. DM