Zuma: The president who knows too little 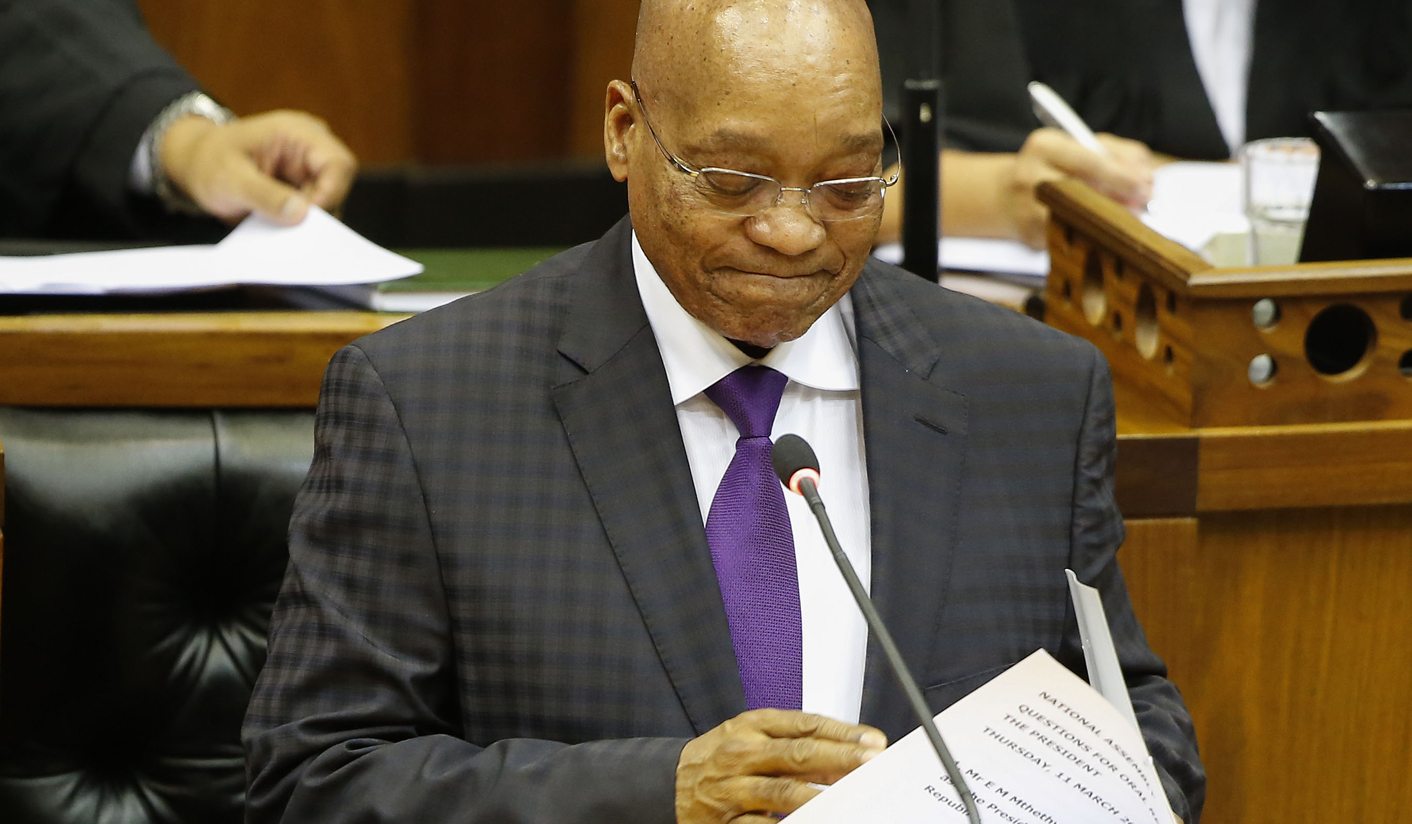 The Economic Freedom Fighters seem to have finally let go of the idea that President Jacob Zuma will tell the National Assembly about his repayment plans for Nkandla. But forget Nkandla for a moment, and forget Omar al-Bashir. The most troubling thing to come out of Thursday’s parliamentary Q&A with President Jacob Zuma was surely his professed lack of knowledge about no less than three high-profile South African issues. By REBECCA DAVIS.

President Jacob Zuma has no knowledge of the incident just over a month ago in which one of the most senior figures in his cabinet accused the judiciary of producing biased judgments.

Zuma has no knowledge of the controversial decision taken by Mineral Resources Minister Ngaoko Ramatlhodi this week to suspend a mining licence due to retrenchments.

Zuma has little, if any, knowledge of the issue of illicit financial flows out of South Africa, including the allegations of this nature swirling around mining company Lonmin.

These three perplexing knowledge gaps emerged during the president’s oral Q&A in the National Assembly on Thursday.

Though the Economic Freedom Fighters’ (EFF’s) insistence that it would hold the president to account once again over Nkandla dominated headlines in advance, it wasn’t Nkandla that provided Zuma’s stickiest moments on Thursday. By the president’s usual standards it was a fairly gruelling session, in which he was grilled on a number of fairly tight technical issues, and revealed himself to be lacking in response.

As is the case with all these sessions, Zuma had the opportunity to prepare answers to six main questions in advance. What he does not have the chance to prepare, however, are responses to the follow-up questions from the opposition.

It was here that Zuma was left groping in darkness. In response to the Inkatha Freedom Party’s Sibongile Nkomo, who asked what the revoking of Glencore’s coal mining licence would mean for prospective investors, Zuma replied, in apparent ignorance of the situation: “I can’t be a sangoma.”

In response to the EFF’s two questions about illicit financial flows, including that affecting Lonmin, the president initially gave a rambling non-answer. When pressed, he responded: “The government does not interfere with private sector business.”

When EFF leader Julius Malema asked Zuma whether he had condemned Police Minister Nathi Nhleko’s comments on the potential corruption of the judiciary, Zuma replied: “It’s literally the first time I hear (of it).”

Nhleko’s comments were widely covered in the media. The potential involvement of Lonmin in illicit financial flows was one of the aspects covered by the Farlam commission into Marikana – whose report Zuma has been “applying his mind” to for several months.

The proposed suspension of Glencore’s coal mining licence, meanwhile, prompted statements from both the Democratic Alliance (DA) and the EFF.

Rising to ask the president the coup de resistance question on Nkandla spending, Malema termed it “so embarrassing” that Zuma could not answer questions on issues like these.

“How can a sitting state president know so little about so much?” Malema inquired.

On Nkandla, indeed, Zuma was actually on safer ground – given that Parliament’s ad hoc committee established to consider the police minister’s report on Nkandla had not yet concluded its business. “I will respond further to debates around this matter (Nkandla) once all processes have been concluded,” Zuma replied.

In response to a follow-up question from Malema instructing him to tell the House when he was “paying back the money”, Zuma said: “Honourable speaker, I have answered this question. I have.” The only further comments he had to make on the matter, in response to further follow-up questions from the opposition, were that the public protector’s findings on Nkandla were a “recommendation” rather than a “judgment”; and that people who had misused funds in the management of the Nkandla upgrade project would be brought to justice by the courts.

One of the weaknesses of the president’s Q&A format we’ve pointed out before is that there is no way of ensuring answers match questions. If a question isn’t answered to the opposition’s satisfaction, tough. On this occasion, it was expected that the EFF would keep hammering away at the matter until Speaker Baleka Mbete was driven to apply Parliament’s new rules and have its MPs removed.

Unexpectedly, that didn’t happen. Though members of the EFF’s parliamentary caucus caused a hullabaloo in the wake of Zuma’s non-answer on Nkandla, they were careful not to be on their feet too long, taking it in turns instead to have their time at the microphone. There were points when the scene appeared on the verge of tipping into chaos, as the EFF MPs seemed to run verbal riot, yelling their contributions without bothering to raise points of order.

Perhaps wisely, however, Mbete gave them a fair amount of leeway. “Today you have been so nice,” Malema told her at the end. Partly due to this permissiveness, and partly due to Malema calling an end to the Nkandla badgering, the National Assembly session concluded peacefully with Mbete adjourning matters, rather than parliamentary security officers entering the building.

Malema indicated that the “pay back the money” show was over with the words: “It’s very clear we’ll never get an answer, Mr President. Let’s meet again in court.”

Later, he told journalists that the EFF “prays” that a court challenge will compel Zuma to pay back some of the money spent on the Nkandla security upgrades.

While Zuma may not have relished his time in the hot seat any more than usual, one aspect which may have given satisfaction to the entire African National Congress (ANC) caucus was the conflict in the opposition ranks. From the outset, it was clear that relations between the opposition parties are distinctly strained at the moment. Gone is the alliance that appeared to be brewing between the DA and EFF last year. Seemingly as a result of the DA voting to approve Parliament’s new rules, the gloves have come off.

The EFF’s Mbuyiseni Ndlozi accused DA chief whip John Steenhuisen of being a racist who “enjoy(s) the beating of black people”. DA leader Mmusi Maimane’s comment that the EFF and ANC were “back in love” – seemingly due to agreement on both sides that Sudanese dictator Omar al-Bashir should not have been arrested in South Africa – was greeted with fury by Malema, while ANC backbenchers gleefully chanted “fight!”.

One of the session’s most heated moments came within the first 15 minutes, when EFF MP Natasha Louw accused the Freedom Front Plus’s Pieter Groenewald of swearing at the EFF. (Groenewald later said EFF members had pushed him outside the House.) Louw suggested that she and Groenwald take a trip outside “and moer each other”.

Music, no doubt, to ANC ears: fighting within the opposition leaves less time for tackling the ruling party. DM

Photo: South African president Jacob Zuma during an answering of questions session in parliament, Cape Town, 11 March 2015. President Zuma faces widespread criticism in parliament with questions being raised over alleged corruption surrounding his twenty million euro private estate, and a national electricity crisis out of control, rising unemployment and an ailing economy topping the list of failures under his tenure. EPA/NIC BOTHMA/POOL.