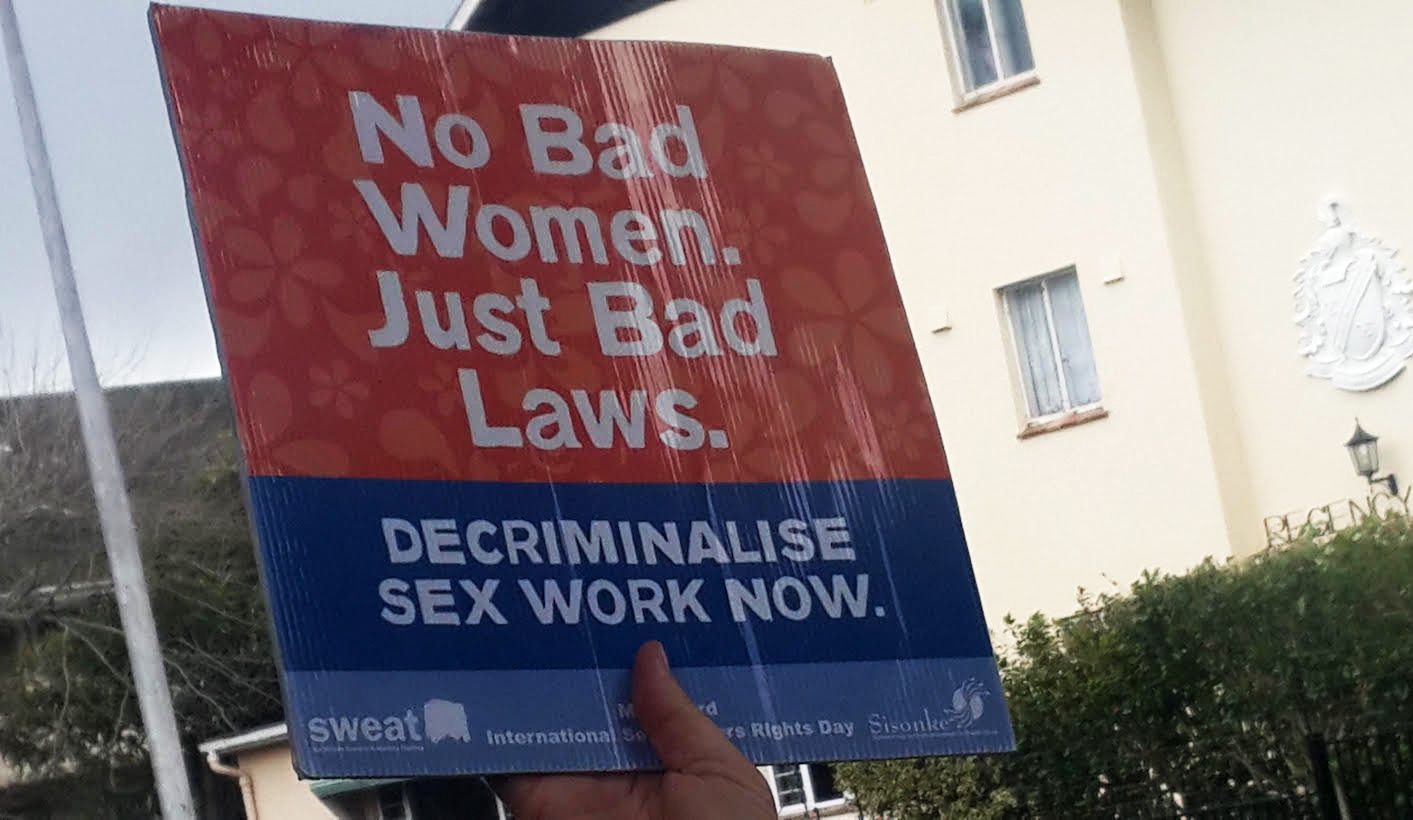 Several sex workers have been brutally murdered in and around Cape Town. This week members of the Sex worker Education and Advocacy Taskforce (SWEAT) and Sisonke National Sex Worker Movement of South Africa kicked off a month-long campaign to raise awareness of the high levels of violence faced by sex workers in the city. While the campaign is part of ongoing attempts to lobby for the decriminalisation of sex work, it also hopes reclaim the spaces where at least four women have been found brutally murdered. By MARIANNE THAMM.

Exactly 37 windows from various apartment blocks face onto the corner of Main Road and Oak Avenue in the suburb of Kenilworth in Cape Town where the battered body of 19-year-old Shemise Gordon, who died of multiple stab wounds, was found by a passer-by next to a hedge on the morning of 2 August, 2014.

It would have been mid-winter and characteristically blustery, wet and bitterly cold. Shemise Gordon, known as Kleintjie, was just one of several women who work in the semi-residential area and have done so for over three decades. It is a hostile environment, with residents regularly complaining to council and police about the presence of the sex workers. Sex workers have become, over the years, part of the scenery in the verdant suburb. Their occasional screams too form part of the suburban soundtrack along with sirens, car alarms and hooting taxis that commute up busy Main Road. Which might explain why no-one heard or took notice of Gordon’s cries.

On Tuesday, a small group of Sweat members braved icy winds and rain to remember Gordon. They placed orange ribbons and flowers at the spot where she died and demonstrated for an hour in the pouring rain. There are no known photographs of Gordon. Like so many women who work the streets selling sex, she was anonymous until her killer struck.

The Tuesday gathering is part of an ongoing month-long campaign to coincide with Women’s Month and to highlight several issues faced by sex workers including police harassment and abuse, dangerous working conditions as well as life-threatening violence.

The protest happened on the same morning Kenilworth resident, swimming coach Tim Osrin made yet another appearance in the Wynberg Magistrate’s court for assaulting domestic worker Cynthia Joni on 2 October 2014 while she was walking to work in the area. Osrin later claimed he had mistaken Joni for a “prostitute”. The incident highlighted the eternal tensions and dangers in the suburb.

Gordon’s death was lonely and violent, like those of other women in the city. On 2 September last year Carmen Williams, 30, was found dead under a bridge in Woodstock. She was a month away from giving birth. Earlier in the year, on 28 July, Anisa Adams, 25, was found strangled in a back packers lodge in Loop Street in the City. On 3 August, Anita Mambumba died of head injuries in Khayelitsha while Nokuphila Kumalo, 23, was beaten to death in Woodstock in April, 2013. Artist Zwelethu Mthethwa has been charged with attacking her “by repeatedly kicking her and stomping her body with booted feet”.

As long as sex work is criminalised, sex workers will continue to be marginalised, targeted and find themselves working in dangerous conditions. SWEAT has charged for many years that sex workers, rather than being protected by police, are instead targeted by them. There have been allegations of rape, extortion and abuse.

Sex workers are vulnerable and the stigma attached to the work exacerbates the ability to access services – including health and legal – and basic human rights to which everyone in the country is entitled.

A Kenilworth resident drawn out of his home by the chants and songs of the Sweat and Sisonke protest said that he agreed that sex work should be decriminalised but added residents in the area were tired of dealing with the “mess” – including used condoms – that often litter the suburb’s streets in the mornings after nightly rendezvous.

“It would be better if they could all go an work somewhere away from here where it is safer for everyone,” he offered.

That it has taken this long for South Africa to decriminalise sex work points to just how contentious an issue it remains in a country as conservative and deeply patriarchal as South Africa.

In 2002 the Constitutional Court, in Jordan vs the State, handed down a judgement which upheld the criminalisation of sex work under section 20 (1) of the Sexual Offences Act. But the court was divided six to five with regard to holding the prostitution position valid. At the time many felt the judiciary could have used the case to eliminate the violations of the human rights of sex workers and their clients because of the criminalisation of sex work.

Activists have argued that the only option that will protect and serve the human rights of sex workers is non-criminalisation. The Commission for Gender Equality (CGE) has come out in support of decriminalisation and has stated that the current criminalisation violates sections 10, 12 and 22 of the Constitution which protect dignity, freedom of security of the person and freedom of trade, occupation and profession.

Altering legislation would require a major mind shift with regard to policing, the payment of tax as well as the protection from labour laws to provide better protection to sex workers.

Later in the day as the clouds lifted and the rain evaporated, the outline of a body in orange chalk, the bunches and flowers and the orange ribbons left by those who knew and cared for her, were the only traces left of Shemise Gordon’s young life. Alongside it, life and traffic on Main Road continued its oblivious daily ebb and flow. DM