Science: Gene editing tool takes laboratories by storm – but there are ethical concerns 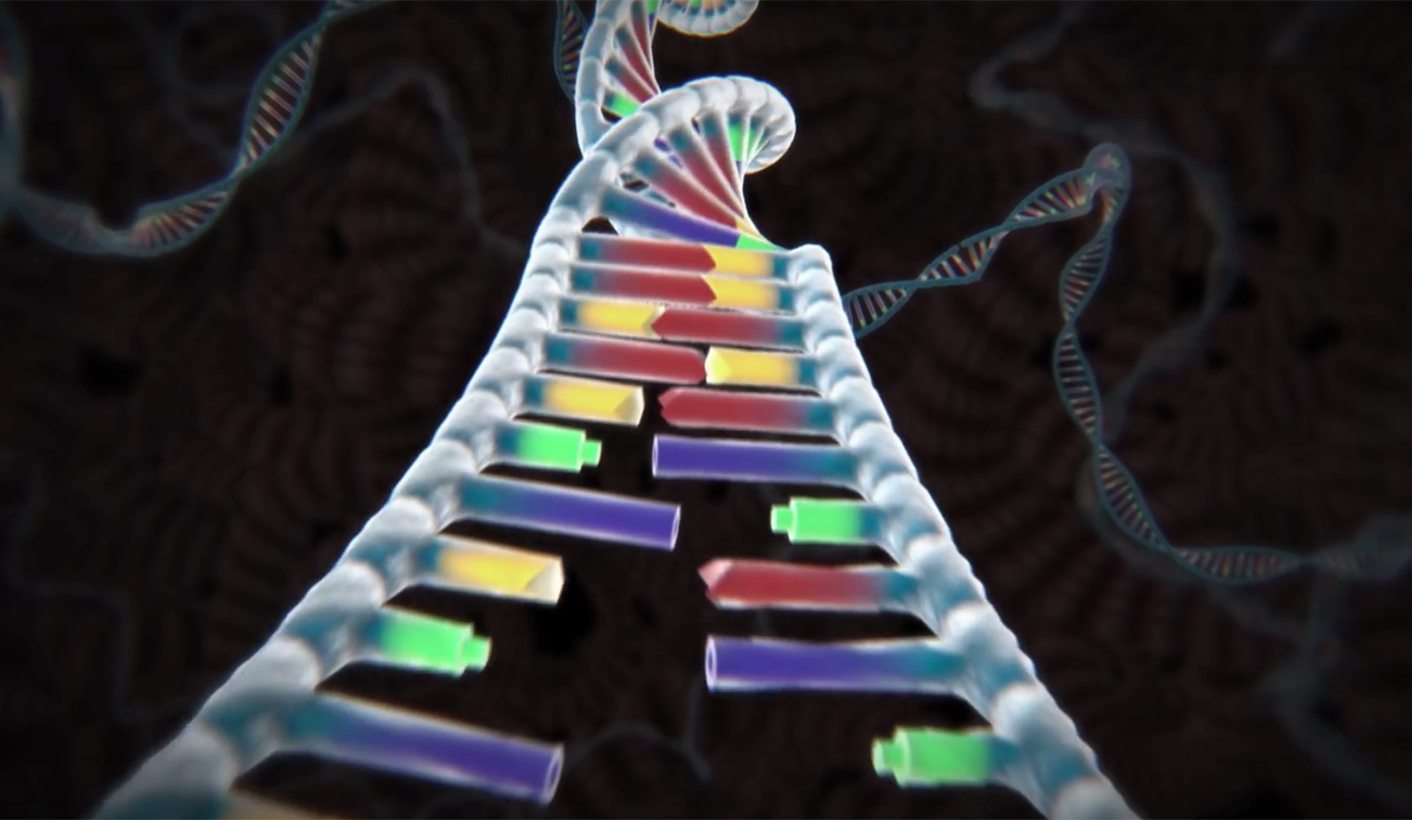 Some years ago, laboratories were taken by storm by the discovery of a molecular editing tool known as CRISPR/Cas9 that suddenly enabled scientists to modify genes in various ways. But the discovery had significant limitations – until this year, when researchers managed to make the editing tool much more precise. This could have significant implications for the treatment of genetic disorders and complex diseases such as HIV and tuberculosis. But what about the ethical concerns, which remain a challenge for scientists the world over? MARELISE VAN DER MERWE spoke to Dr Robea Ballo, senior scientist at the University of Cape Town’s stem cell biology laboratory.

In Africa, there’s a 50%-90% mortality rate for children with sickle cell anaemia. South Africa is experiencing rapidly escalating rates of Mycobacterium tuberculosis, with an equally concerning mortality rate; and country and continent alike are battling deeply worrying HIV/Aids statistics – according to Avert.org, 5.6-million South Africans were living with HIV at the end of 2011, including 460,000 children under 15.

Local research into the CRISPR-Cas9 gene editing system could potentially provide solutions, but ethically, uncertainty remains. “Given that the CRISPR-Cas9 system is easy to use, it’s inevitable that the system might be exploited by reckless attention-seeking scientists,” points out Dr Robea Ballo, a senior scientist in the stem cell biology laboratory at the department of human biology at the University of Cape Town (UCT). Ballo has established a specialised tissue culture facility for the generation of induced pluripotent stem (iPS) cells, and is training postgraduate students in iPS cell and CRISPR/Cas9 technology for the generation of disease models in cell culture.

But what is CRISPR-Cas9? If you missed the bus when the discovery was first made, you might be understandably dazed by the current hullabaloo. A crash course: in November last year, scientist Dr Jennifer Doudna won the 2015 Breakthrough Prize in Life Sciences for the co-discovery of a revolutionary gene editing tool known as CRISPR – which stands for “clustered regularly interspaced short palindromic repeats” (say that three times fast). It’s a DNA/gene editing tool which, although not the first, has been acclaimed for its simplicity and cost-effectiveness.

But the tool had one serious shortcoming: it lacked specificity, that is, gene editing could sometimes end up slightly off target. By June this year, scientists at Harvard and Massachusetts had combined two novel technologies to increase specificity in a method they hope will be greater than the sum of its parts. By July, scientists at the University of Tokyo had added photo-activated technology into the mix, further increasing specificity with a method of editing that uses light in order to switch the editing process – put very simply – on and off.

Doudna and her colleague Emmanuelle Charpentier each received $3-million after the CRISPR discovery, which in truth had been emerging since the 1980s, although scientists did not at the time know what the discovery meant. Microbes have, in fact, been using CRISPR molecules for untold lengths of time as a natural defence mechanism. Quanta magazine reports that in 1987, scientists at the University of Japan published a paper on the sequence of a gene called iap belonging to the microbe E.coli. Near the iap gene lay five identical segments of DNA which formed what the magazine quaintly calls a “peculiar genetic sandwich”. The researchers, at the time, did not know the significance of the genetic sequences they had found. Additionally, these were usually accompanied by a cluster of genes, dubbed CRISPR-associated 9 nuclease (Cas) which encoded enzymes that could cut DNA. But by the 1990s, similar sequences had been noticed in numerous microbes. What’s more, they resembled the DNA of viruses.

When this clicked, US scientist Eugene Koonin realised that the microbes were using CRISPR to defend themselves against viruses, creating blueprints that would help them recognise attackers.

Fast forward to the 2000s, and Doudna – an expert in the field of RNA – wanted to know more about CRISPR. In time, Doudna and her colleagues began to realise CRISPR was not only a sophisticated immune system found in nature; it could be an effective tool in medicine, agriculture and more. The rest, as they say, is history.

By now, if you’re not a molecular biologist – and most of us aren’t – you’d be forgiven if your eyes were squinting and you were tired of acronyms. So a little background: DNA stands for deoxyribonucleic acid; RNA stands for ribonucleic acid. DNA basically stores genetic information, a blueprint of biological instructions to determine how a living organism develops and functions. These instructions are then copied into an RNA molecule, from which they can be translated into an organism’s functional elements. Or, as diffen.com puts it, “RNA helps carry out (the DNA) blueprint’s guidelines.” DNA is double-stranded, RNA is single-stranded. For the purposes of understanding CRISPR-Cas9, it’s also important to know that RNA is the more versatile of the two, but DNA is more stable and can store quite complex information for some time.

Because of the abovementioned properties, RNA is particularly useful in gene editing. The CRISPR/Cas9 system relies on RNA to guide the gene scissor to its target site. But the CRISPR method is not, to borrow a phrase, an exact science. Once the scissor has cut its target DNA, the cellular systems’ repair mechanism immediately kicks in. This can take place in one of two ways – and may have unpredictable results. (See video.)

A major challenge, says Ballo, is the possibility of erroneous binding of gRNA, which can result in Cas9 cutting where it is not supposed to. This is known as causing an “off-target” effect, which can have major implications, including triggering the activity of genes that can have pathogenic or cancer-causing effects. “It is well-recognised that the application of this technology is a long way from clinical application because of the challenges, such as ‘off-target’ effects,” says Ballo.

“For this reason, researchers are working tirelessly on finding innovative ways of improving the specificity of the system.” The advance published in Human Gene Therapy* would have significant implications for gene editing research, she says, if the safety concerns have indeed been eliminated as described.

In the above mentioned paper, researchers from the Massachusetts General Hospital and Harvard Medical School developed a very specific method of genome editing, made possible by combining two new strategies which were designed to improve the specificity of Cas9 cleavage.

These methods are a) the use of truncated guide RNA molecules (gRNAs), which create shorter binding sites between the guide RNAs and the targeted DNA regions and b) the addition of a Fokl domain protein to a disabled Cas9 protein. Both approaches, the scientists told GEN magazine, have been shown separately to increase the specificity of CRISPR/Cas9 nucleases, and they believe this effect could be amplified if they combined the two methods in a technique they have named tru-RFN.

Meanwhile, in July, a study published in Nature Biotechnology reported that at the University of Tokyo, light was being used to increase the specificity of targeting genes for research. Chemist Moritoshi Sato and his colleagues had developed pairs of photo-switching proteins called magnets, which come together using electrostatic interactions when activated by light. They had also previously developed a CRISPR-based transcription system to target particular genes. In their latest project, Sato’s researchers used the magnet proteins to create a photo-activated Cas9 protein which could, as the description suggests, enable extremely precise light-activated genome editing. The light, in other words, functions as a very precise on and off switch.

If the abovementioned methods work, they could make using CRISPR significantly safer. However, Ballo says that despite this, therapeutic use is still a long way off, and ethical debates abound as boundaries are set around just how far CRISPR-related research is allowed to go.

“A Chinese team of researchers* recently attempted editing human embryonic cells, which immediately raised concerns by leading scientists,” says Ballo. A taskforce headed by Doudna issued a statement in Science of March 2015, recommending that attempts at germ-line modification therapy that would produce genome-edited humans be discouraged while the implications are being considered.

“They called for an international meeting with representatives from various parts of the community including scientists, legal advisors, the clergy and the lay society to consider the appropriate way forward,” explains Ballo. Following this, a second group of scientists suggested a moratorium on research involving human germline editing. South African scientists will comply with international guidelines, Ballo believes.

But until such time as someone steps out of line, they are forging ahead. “There is no doubt that the CRISPR-Cas9 system, and adaptations thereof, will form the basis of many therapeutic tools of the future,” Ballo says. CRISPR-Cas9 is best applied to genetic diseases having a single gene defect or mutation, so for now, research is geared towards diseases where the target cells are easily accessible and can be manipulated outside the body, for instance in blood cell and bone marrow conditions such as sickle cell anaemia and beta thalassemia.

But research is by no means limited to that area. A groundbreaking study by Liao et al (2015) described the adaptation of the CRISPR-Cas9 system to act as an intracellular defence against HIV-1 infection in human cells – also revealing the potential of the system as a defence against viral infections.

And perhaps most encouragingly, in a country facing more tuberculosis infections every day, Ballo describes a study by Choudhary et al (2015) which used a CRISPR interference approach selectively to control Mycobacteria gene expression.

“We should see CRISPR-Cas9 as a research tool to facilitate our understanding of underlying disease mechanisms,” says Ballo. “We should allow the science to proceed and ensure that rules are in place to stop abuse of the technology, as was done during the cloning era.” In the meantime, discoveries are speeding ahead. DM