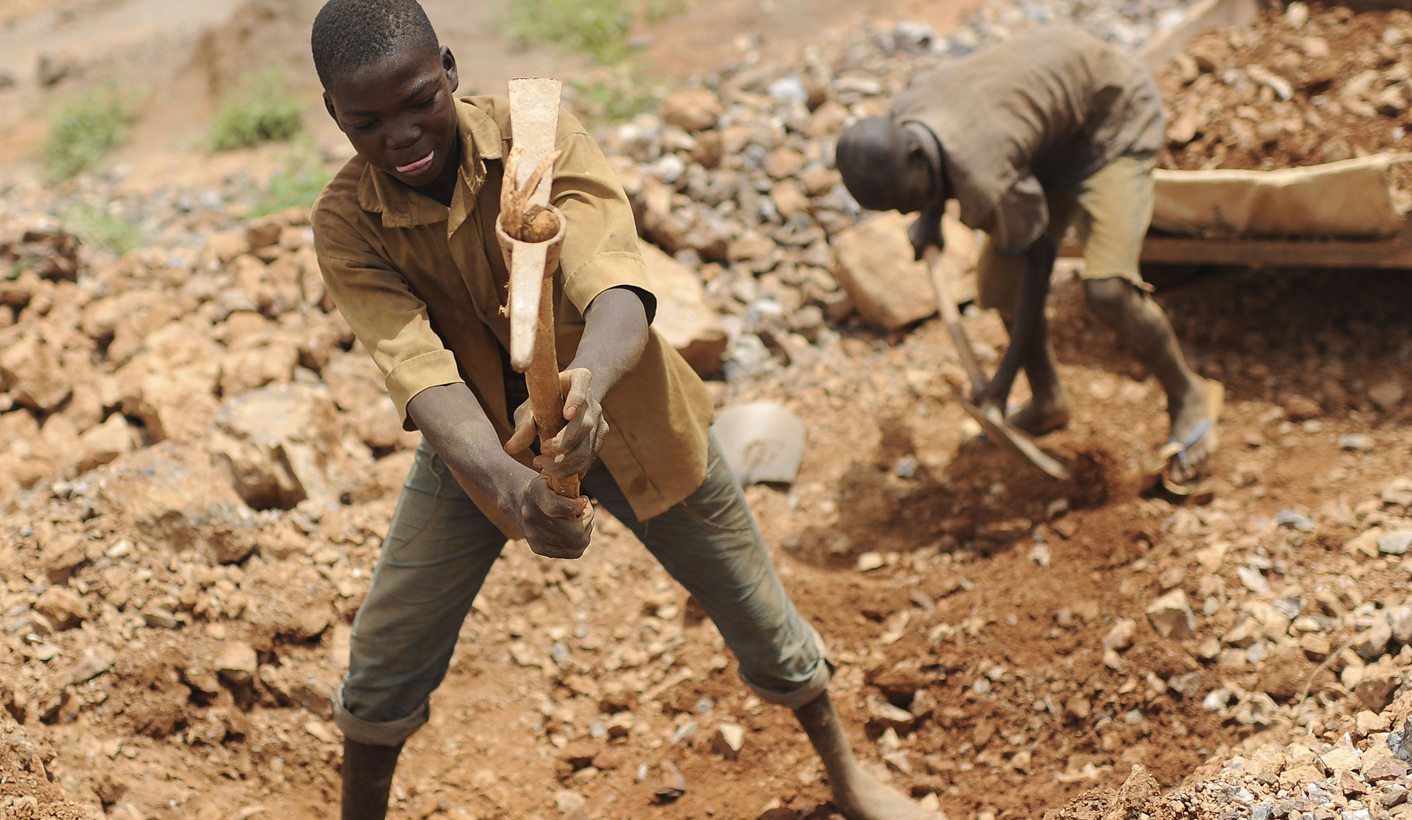 Every day, dozens – not hundreds – more people arrive to work on one of Burkina Faso’s low-tech, artisanal gold mines. Working conditions are poor, and dangerous, but the paltry rewards are still more than they’d earn at home. By PETER DOERRIE for AFRICA IN FACT.

The gold mine of Alga, about 130km north of Burkina Faso’s capital Ouagadougou, could serve as the set for a post-apocalyptic Hollywood blockbuster movie. This barren hillside covered in grey dust is pockmarked with dozens of pits, some covered by ramshackle straw huts. Hundreds of people mill around these holes. Powder camouflages their faces and clothes.

From time to time a muffled explosion from deep underground turns into a geyser of earth. This noise is punctuated by the constant pounding of the stone mills and the blaring of horns from motorcycles racing along narrow paths, carrying minerals and people while chasing pedestrians out of their way.

Gold has been mined at Alga for the last three decades, said Elia Sawadogo, the cousin of a mineshaft owner. But a significant deposit was found deep underground a few years ago. Since then the population has exploded: about 7,000 people now live here, most of them from Burkina Faso, but some from neighbouring countries. “Even now, 40 new people arrive per day,” said Sawadogo.

They work underground as miners and up above as mechanics, machine operators, cooks and prostitutes. The conditions at Alga and most other mines in Burkina Faso are abysmal. I spent most of March observing five mines in this West African country.

Each morning the Alga miners descend on hand-powered winches into shafts that reach more than 170 metres below ground. They work in two 12-hour shifts, first digging a shaft to the depth of the gold-bearing stratum, and then carving horizontally as they follow the gold veins. Dynamite is used to expose the precious metal. The valuable rocks are packed in sacks and hoisted up.

“At these depths we have to use compressors to pump in fresh air,” said Amadou, a miner who did not want to provide his last name. Then the fumes from the compressor invade the narrow shaft and “it gets even hotter down there”. And fouler too: the workers remain below all day and defecate into the seams.

After workers re-emerge, their salaries are not enough to pay for shelter in one of Alga’s few solid huts or houses. They sleep under the skies on the ground without blankets because there is no place to store personal belongings. Some of the luckier ones sleep in the straw huts covering the shafts.

Helmets, gloves, safety boots and other protective equipment are unheard of at Alga. Anyone can wander freely into the shafts, mills and washing hangars. Toddlers crawl in the dust amidst the clamour of the generators and other machinery.

Children, some as young as 12, also work: hammering gold stones into pebbles, operating mills or washing the gold with toxic mercury. Some lie about their age. Many use amphetamines to keep going, reduce anxiety and decrease hunger, according to an official from the United Nations Children’s Fund.

Mohammed, a crew leader in Alga, who did not provide his last name, calls it “a question of personal courage”. “If a child is brave enough, he can work in the shafts, no matter the age.”

Although artisanal mining uses very basic equipment, it requires intensive capital investment. It can take up to five months to reach the gold-bearing band, according to Sawadogo. Albert Oussé, an investor and manager at the Tikando mine, about 400km south-west of Ouagadougou, said labourers dug for about two months before they started producing gold.

During this time, the miners’ only compensation is food. The investor pays for this as well as the digging equipment. Monetary payments only begin once sacks of gold-bearing rock emerge from the shafts.

If a mine has a permit, the holder gets his cut for organising security and managing relations with local authorities. For instance, Oussé demands 20% of all mine output. If shafts are dug on private land, the owner is also entitled to a share of between 1% and 10%. Tikando produces about 50kg of gold a month, Oussé said, at a market value of $1.8-million in March 2015.

The remaining sacks are split between the investor who has financed the shaft and the miners who have produced the valuable rock. The miners will further distribute their share according to seniority and individual output.

The miners then pay specialised workers to crush, mill and wash the rocks. These experts in turn pay rent for their hangars to the mining permit holder or the local community. Up until the last link of this chain, miners do not know the gold content of their personal share of rock.

Miners can go without income for months at a time. Still, the payoff can be substantial: stories abound of miners finding hugely profitable veins and becoming rich enough to buy luxury cars and motorcycles. Most miners are less fortunate. “I have been a miner for 16 years,” said Bamoro Maadi from the Tikando mine. “But until now, I did not have a lot of luck.” Still, Maadi and his colleagues admit that they earn more from mining than farming. Incomes can average more than 10,000 CFA francs ($17) a week.

In many cases, gold trading houses with political connections have laid claim to particularly productive sites, according to media reports and local nongovernmental organisations (NGOs). These firms collude with local authorities to force miners to sell gold to them at fixed prices, which can be as low as 45% of the world market price.

Small-scale mining yields only 900kg of gold per year compared to industrial mining’s 30 tonnes, according to a 2012 report by the Extractive Industries Transparency Initiative (EITI), which monitors deals in oil, gas and mining. The real amount carved out by artisanal miners could be as high as 20 tonnes each year, said Kevin Telmer, executive director of the Artisanal Gold Council (AGM), a Canadian NGO that works with small-scale miners.

But too many of these labourers are working for a pittance in dangerously frail shafts without protective equipment while being exposed to toxic chemicals. Too many are children. The government should fix this by eradicating child labour and ensuring mineworker safety. It should also protect the environment and ensure workers and local and national authorities get a greater share of the profits.

“It is entirely possible to flip the artisanal mining sector over into the formal sector,” Telmer said. AGM’s two pilot projects in Burkina Faso focus on safety and increasing the income of miners. They have deployed gravimetric systems to medium-sized mines that eliminate the use of toxic chemicals like mercury while also reducing dust.

These “only slightly more sophisticated techniques” also increase the recovery rate by up to 30%, Telmer claims. Miners can recover this initial investment of about $80,000 in about six months, and then raise their income substantially, he said.

While mining communities in Burkina Faso are very cooperative in trying to curb child labour, other issues will be harder to tackle. Smuggling and tax evasion could be costing the government about $230-million per year, if the 20 tonnes a year extracted by artisanal mines were taxed at the same rate as industrial mines. This is about 15% of Burkina Faso’s 2012 budget of $1.6-billion. These funds could be used to improve worker safety and make mines more productive. Harnessed effectively, the gold trade could provide tremendous benefits to workers and government coffers alike, given the necessary capital and political will. DM

Photo: A picture made available on 19 July 2012 shows two young boys working hard on the terrain of an illegal gold mine near Kaya, Burkina Faso, 05 July 2012. More than 11,000 kids and minors in Niger and Burkina Faso have to work in illegal gold mines under life-threatening conditions. EPA/HELMUT FOHRINGER