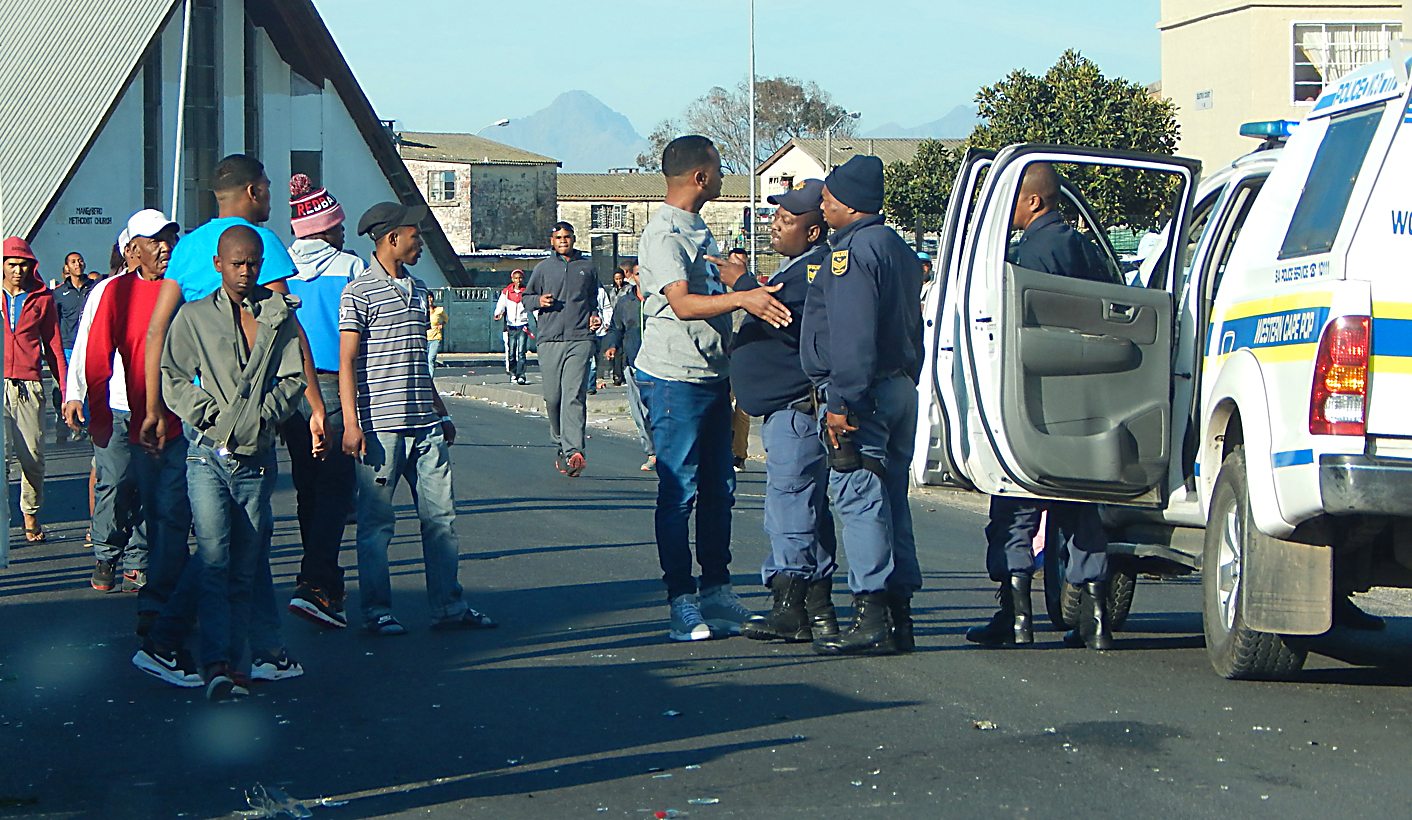 On the weekend, Pagad led a march and a motorcade on the Cape Flats. The march in Mitchells Plain went off peacefully; the motorcade in Manenberg did not. Intervention by the SAPS averted disaster – this time. But how long until the pot boils over? By MARELISE VAN DER MERWE.

A People Against Gangsterism and Drugs (Pagad) motorcade which the group said was intended to be peaceful turned bloody on Saturday when the group clashed with gang members in Manenberg.

Police vehicles were damaged and a police officer is still in hospital after being hit on the head with a rock, Constable Louisa Noloyiso confirmed to Daily Maverick.

A case of assault and malicious damage to property has been opened, Noloyiso said. Police do not yet have an idea who the culprits are.

Bottles, rocks and other items were thrown on Manenberg Avenue, when the motorcade hit Hard Livings gang territory. A series of stun grenades were detonated as hundreds of people were dispersed.

Until then, the motorcade had been greeted largely with support from the community as it drove through neighbourhoods with a loudhailer. As leaders yelled messages of warning to gangsters and drug dealers, the procession was greeted with loud cheers of “Viva Pagad, viva!” and “One merchant, one bullet!”

The motorcade had been following a route that appeared targeted towards hotspots in Heideveld and Manenberg, as it passed a number of houses decorated according to an alleged code. Community legend has held for decades that houses painted in particular colours are decorated in this fashion to communicate that drugs are available there, which Pagad’s Heideveld coordinator Zacharia Albertyn corroborated in response to a query from Daily Maverick.

Initially the procession was peaceful, but about 20 minutes in, near the refurbished Aletta Court on Manenberg Road, chaos broke out. Just minutes earlier, youths in masks and camouflage gear had leapt onto the back of one of the Pagad bakkies and begun shouting more forcefully through the loudhailer and pumping their fists in the air, causing this reporter to become concerned that the situation might escalate. Near Aletta Court, a series of loud bangs erupted and the photographer warned the writer – who was driving – to get down. “I think there are gang members up there,” she said. “If you move ahead, we’re going to hit gunfire.”

Police intervention was rapid and a series of stun grenades were set off, averting a shootout, although large rocks, bottles and other makeshift weapons were being thrown and the crowd appeared panicked; the situation was chaotic. At this point a number of cars including Daily Maverick’s vehicle were completely trapped. Smoke from the stun grenades left visibility poor. By the time the smoke cleared the area was deserted. Daily Maverick assumed the incident was over, but within seconds a crowd of people appeared from the left and a police vehicle moved in, forming a buffer between the crowd and Daily Maverick’s vehicle. At this point it was unclear what was happening as a new crowd was forming up ahead and it appeared police were attempting to speak to them. In the meantime, two other officers told Daily Maverick to get out as quickly as possible over a pavement and through a back alley.

Photo: … And, within minutes, it was business as usual. (Janine Phillips)

Back at the initial meeting point, police informed Daily Maverick what had happened. The motorcade had passed through Hard Livings gang territory. Pagad leaders had yelled slogans that angered gang members; gang members began to retaliate. Almost instantly, police threw a series of stun grenades into the crowd, afraid that gunfire would erupt as it had in previous incidents. At some point during the chaos, members of the rival Americans gang from Bonteheuwel turned up as well, the police officer told Daily Maverick. Gang members appeared to have been drinking and it had taken skilful negotiation by gang leaders at the scene to defuse the tension.

The police officer, who preferred not to be named, told Daily Maverick that had the stun grenades been thrown seconds later, the incident would have been catastrophic. “We would have been looking at 500 people dead. Men, women, children, including you and me,” he said. “Had we allowed it to escalate, we would have been unable to protect you. We have had our vehicles overturned in similar circumstances.”

The photographer, who grew up in Heideveld, said that like the police, she had been more concerned when there was silence than when there was a crowd. “When everybody runs down the alley, you worry,” she said. “That’s when shit is about to go down.”

According to the police officer, the police vehicle that buffered Daily Maverick had swerved in to prevent gunfire from approaching gang members who had mistaken the Daily Maverick vehicle for a Pagad vehicle.

Despite the swift action of the police, however, Pagad was critical of their role, saying they wanted more collaboration with the South African Police Service (SAPS) in future.

“We don’t want to blame the authorities but today, the SAPS themselves came under the crossfire from gangsters. Some were injured and vehicles were damaged. If they had worked with us from the beginning, they would not have had this problem,” said deputy national coordinator Haroon Orrie. “If SAPS does not work with us, gangsters will take advantage of that.”

Orrie said Pagad would not be intimidated by violence.

“We are saying yes, we can fill that gap (where police cannot reach). History can testify to this. Gang tactics will not deter us. We will be back.”

Pagad rose to notoriety in 1996, when gang leader Rashaad Staggie was beaten and burnt to death by a mob at his home in Salt River. After 2002, Pagad leader Abdus Salaam Ebrahim was imprisoned, and the organisation kept a lower profile. Now, however, leaders say Pagad is ready for a fight.

In February and March 2014, Pagad hosted more protests than it had in the whole of 2013, and the Economic Freedom Fighters (EFF) memorably voiced its support for the organisation, although the love affair hit a speed bump when the EFF supported the legalisation of dagga. Earlier this year, Pagad strongly denied involvement in facilitating Iranian intelligence activities after the Spy Cables were leaked.

Just last week, news broke of a leadership battle between Pagad and the breakaway group G-force, where, confusingly, both groups accused each other of running a smear campaign. Pagad said the expelled members were banned for using the movement’s name to extort money from businessmen while fostering relations with gangsters and drug dealers.

Members of G-force, meanwhile, said they were challenging Pagad leadership, because “it is time to work within the framework of the law”.

Speaking to Daily Maverick, both Orrie and Albertyn seemed to echo this goal, saying they were seeking collaboration with various organisations, from religious bodies to the authorities. A Christian reverend has joined Pagad, Albertyn said, although he was unable to recall her name.

Was their intention to proceed peacefully in future? Yes, said both.

What about the youths who leaped onto the bakkie with covered faces? “We do not advise people to do it,” Orrie responded. “But if they do it, we cannot say what their reasons are. Those were youths, so perhaps they do not want their identity known. We protect our women and children.”

The protesters were aware that gangsters were going to wait for them, said Orrie. “We were ready. But the police intervened.” Were they armed, then? No, said Orrie. Not this time.

Would they be willing to take up arms in future?

“We would take up arms to defend ourselves, but we would not hurt innocent people.

“We were asked to leave today. But nothing of that nature would deter us. Not their firearms. They have clearly told the system, you can go to hell. We are saying they can be as ready as they like. We would have stood firm no matter how much firepower they have.”

“We gave our people clear instructions for today – go as peacefully as possible,” said Albertyn. “People must not be afraid to join us because these are legal protests, the police are there. We are very active at the moment, trying to get as many people aboard as possible.”

Heideveld and Manenberg are plagued by gang violence and drug abuse. Manenberg is one of the Cape’s most violent communities, where rivalry between the Hard Livings and the Americans – the most powerful gangs – leave the community living in terror. In 2013, 27 people were killed and 50 injured in gang violence in just three months; Daily Maverick previously reported that 16 Manenberg schools were shut for two weeks because it was too dangerous for children to attend. Heideveld residents, meanwhile, lament the increasing danger in the area and one told GroundUp that it was unsafe to leave the house after 6pm. Gangs recruit youngsters as early as 12 or 13 years old as they cannot be jailed. Young gangsters, meanwhile, say they feel compelled to join gangs because there is little else for them to do and because if they do not, they will be unprotected in unsafe environments. The cycle of violence makes it extremely difficult for children to get an education that will give them a good living elsewhere and teachers point out that the exposure to danger is extremely traumatising.

Meanwhile, metro police in the Western Cape have intensified their attempts to fight gangsterism and drugs, while several interventions also exist to support youngsters.

Yet the battle is far from won. The tragedy of the weekend’s events lies in that, while it was an unusual experience for Daily Maverick, it was not for Pagad, the gang members, or the residents who witnessed it. Minutes after the stun grenades went off and the last rocks were thrown, it was business as usual for all. Swift action by the police, and the willingness of both Pagad and gang leaders to step back, averted major bloodshed. But this will not be the end of the story.

With Cape Town residents nearly twice as likely to be murdered as those in Pretoria or Johannesburg, is that surprising?

With the Institute for Security Studies finding that almost two-thirds of Cape Town’s murders take place in 10 of 60 precincts, is that surprising?

With nearly 1,000 children in Manenberg needing trauma counselling in one year due to gang violence, is that surprising?

Mark our words: this pot will boil over.

“We will not divert from our programme,” says Albertyn.

And what is that programme?

“To bring all closer to God.” DM