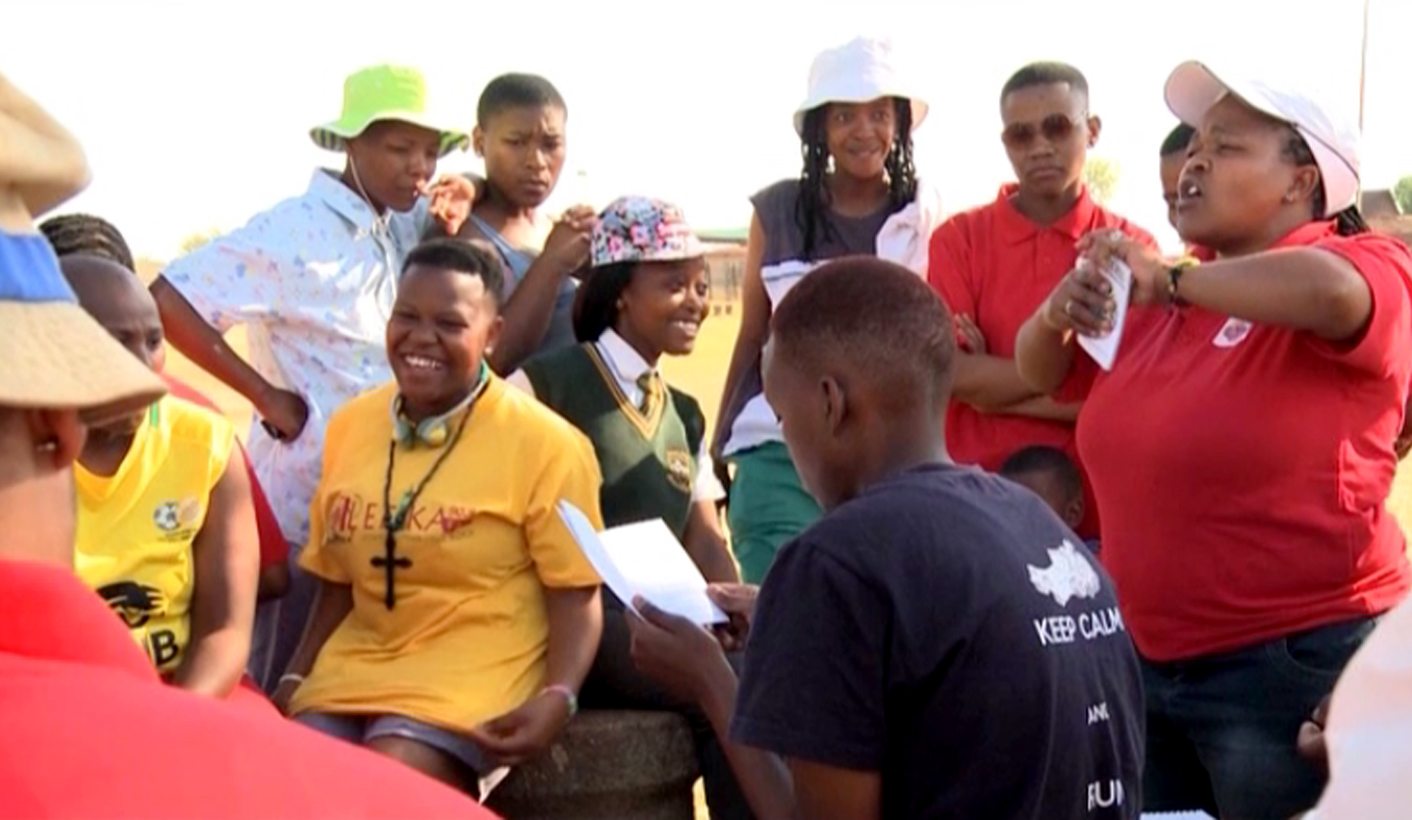 Knowledge of the Constitution is enabling young lesbian women on the East Rand to fight for their rights and to “walk tall” in the face of persecution. In a community that seeks to push them to the very margins of society, lesbian, gay, bisexual, transgender and intersex people are eking out spaces for themselves through small daily acts of defiance. By KYLA HERRMANNSEN for HEALTH-E NEWS.

A multi-coloured gay pride flag hangs in the window; the rainbow cloth’s green stripe catches the sun, casting a green hue over the room. Black pleather couches line the lilac walls and there’s an audible hum – courtesy of the electrical current flowing through the two large speakers stacked on top of each other. The room is uniquely decorated – the walls display a number of homemade posters with slogans, like “Homosexuality is not a choice but homophobia is”. A poster above the doorframe bears a gentle warning to guests: “If you are straight you enter at your own risk”. This is Divas and Dykes Lounge, a gay bar in KwaThema, a township east of Johannesburg.

Divas and Dykes is quite literally the lounge of Ntsupe Mohapi’s KwaThema home. She runs the bar as a means to bring in a little extra income. But the bar’s purpose is not solely financial. “I wanted to create a safe environment for people to be themselves without a lot of eyes looking at them and being disgusted,” explained Mohapi. A lesbian herself, she is all too familiar with the stigma that comes with not conforming to the heterosexuality of the East Rand.

The East Rand is a “corrective rape hotspot” where lesbian women run the risk of being raped – ironically in an attempt to teach them a lesson and convince them that they should be engaging sexually with men instead of women.

High-profile cases like that of Eudy Simelane and Duduzile Zozo attest to the violence and brutality that is metered out in the East Rand as punishment for being lesbian. Simelane’s body was found in 2008 in KwaThema. She had been abandoned in a ditch after suffering a gang rape and being stabbed 25 times. More recently, in 2013, Zozo’s half-naked body was found in Thokoza. A toothbrush had been shoved into her vagina. Her killer was subsequently sentenced to 30 years’ imprisonment for this horrifying murder.

Faced with the reality of these violent hate crimes and a community that does not readily support or accept them, lesbian, gay, bisexual, transgender and intersex (LGBTI) people in the East Rand are trying to crafting spaces for themselves and staging small but significant protests demanding their human rights be recognised.

Divas and Dykes Lounge is one of these small, eked-out spots of acceptance. “There’s no gay bar in our townships and it’s not safe in other places. There’s lots of homophobia,” explained Mohapi, adding that it’s safer at Divas and Dykes Lounge because “people can be themselves here”. There is a “memory wall” in the bar, featuring photographs of Ekurhuleni-based LGBTI community members who have passed on – some due to AIDS and others as a result of gender-based violence.

Not only does Mohapi host the only gay bar in the area, her house also doubles up as the office headquarters for the Ekurhuleni Pride Organising Committee (Epoc). In addition to organising the pride march, Epoc facilitates workshops in the community educating people about their rights.

Mohapi says that while it is hard for adults to be openly lesbian in Ekurhuleni, it is a far greater challenge for youth to be open about their sexual orientation. “It puts a lot of pressure on the LGBTI young person, you know, because you’re not accepted at home, you’re not accepted in church and you go to school and you’re also not accepted there … the pressure is the stigma.”

Local schools have become a prominent site of struggle. Earlier this year, eight schoolgirls were expelled from Tholulwazi Secondary School in Tsakane for the unlikely “crime” of wearing trousers to school. Nandi Tshabalala, one of the girls, claims that the school principal told the girls they could not return to the school until they “knew whether they were girls or boys”.

While the school put the issue of pants and skirts at the forefront of the argument, the girls and their parents viewed the incident as more of a judgment on their sexual orientation. A parent said: “Our children’s rights as women were violated and their right to education was violated too.” This same parent also alleges that the school demanded to see her daughter’s birth certificate to verify that she is indeed female.

Community activist Fikile Mtsweni said the local community radio station, Ekasi Konexion (eK FM), played a role in exposing the school and its repressive acts on air. She hosts a health talk show for the station and happened to be on air that same day. The comments made by callers from the community shocked her.

“Callers said they were bringing evil spirits into the school,” said Mtsweni. Callers were accusing the girls of being mad and crazy and responsible for “bringing Sodom and Gomorrah into our schools and into our communities”. For Mtsweni, these calls revealed the deep stigmatisation that lesbians frequently encounter on the East Rand. Callers also dismissed the legitimacy of the girls’ lesbian sexual orientation saying simply that the girls are “confused”.

After facing this public humiliation, missing classes and being unable to write a number of tests, the girls were permitted to return to school – but only after the Gauteng education department intervened. Department spokesperson Phumla Sekhonyane said “no discrimination of any form including (those based on) religion, sexuality or creed is allowed in schools”.

But this was not an isolated incident. At a nearby school in KwaThema, lesbian girls trying to exercise their rights to wear pants roughly a year prior to this incident were also barred from entering the school gates. “We were standing there by the gate and they were expecting us to go back home and wear skirts,” explained Mpho, who was a pupil at the school. While standing outside the school gate, angry and humiliated, Mpho concluded that this treatment was unjust. She recalls thinking “It’s not fair. I’m not here for clothes … I’m here to learn, you just have to accept me as I am.”

Mpho continued to campaign for the right to wear pants despite the pressure of being “expected to be girls, to wear skirts”. Instead of giving in and wearing skirts or turning to the education department for assistance, Mpho and her classmates made use of the document that they had learnt enshrines all our human rights in the new South Africa. Mpho confronted her teacher and said: “I’ll always continue to wear pants … I have the Constitution with me which says I also have rights as a homosexual. We can’t respect your rights as heterosexuals then you don’t respect our rights.”

In the wake of this act of resistance, girls at Mpho’s school are now allowed to wear pants. Thanks to her understanding of the Constitution, Mpho was able to articulate that gay rights are also human rights – that they are in fact one in the same.

Mpho received her now well-read copy of the Constitution during a weekly support group meeting for LGBTI youth. The group assembles with loud chatter and enthusiastic smiles under a large tree in a public park in KwaThema every Friday afternoon. When Mpho was given her Constitution booklet she was instructed to use it to defend her rights. They were told “if we read it we will know how to fight for our rights … so that on its own really helped us to stand firm and walk tall”.

Parks on the East Rand have become synonymous with gender-based attacks and incidences of corrective rape. But, instead of being intimidated by this and meeting behind closed doors, Mpho and her peers have deliberately chosen to do the very opposite. They wear bright red T-shirts emblazoned with the name Abanqobi which means victors. As young lesbians, they are they are learning that in a community that is hostile to them they need to eke out spaces of acceptance and that even meeting in a public park can become a bold act of defiance in a homophobic environment.

Mpho said the misconception both in her school and in the broader East Rand community is that being a lesbian equates to wanting to be a man. She said she frequently has to tell people “being a lesbian does not mean you are a man. It simply means you are a woman who is attracted to another woman, that’s all”.

But the pants versus skirts debate seems to have become symbolic of this misconception. One of Mpho’s peers in the Abanqobi group came out to her parents as lesbian after many months of deliberating and building up courage. Her parents responded by emptying her cupboard, removing all her pants and replacing them with skirts. “She was left with just skirts,” said Mpho, shaking her head in disbelief.

Inspired by how empowered she is through the Constitution, Mpho is committed to furthering tolerance and acceptance of the lesbian and gay community on the East Rand. “I think there should be justice with homosexuality, I just want people to love each other, you know. Love and unity goes a long way.” DM