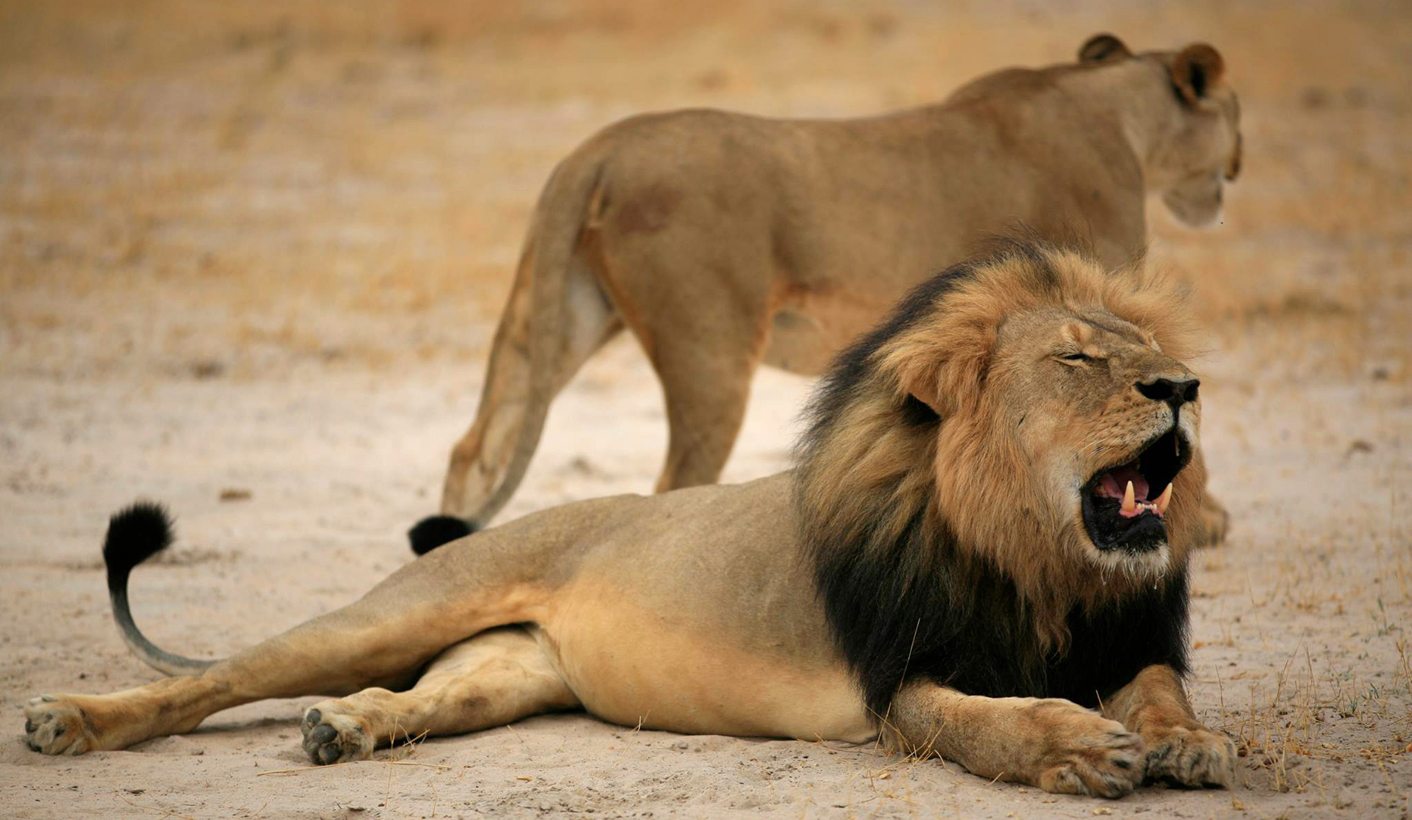 In the past week Southern Africa’s lucrative trophy hunting industry received two devastating blows: the release of an explosive new documentary detailing the unsavoury practices of canned lion breeders and hunters, and the international condemnation around the killing of Zimbabwe’s most famous lion. Under growing domestic and international pressure, the industry is coming in for scathing criticism, not only from environmentalists but also increasingly from within its own ranks. By ANDREAS WILSON-SPÄTH.

Blood Lions, a film that reveals the shocking realities behind the burgeoning business of breeding and hunting lions in captivity in South Africa, premiered to standing ovations at the Durban International Film Festival last week. It’s estimated that between 6,000 and 8,000 lions are being raised and kept in around 150 to 200 facilities for the sole purpose of providing targets for wealthy international hunters.

On these intensive breeding farms, lions are “produced” battery-style before being released into relatively small camps often only days before being shot. The industry and the South African government refer to this as legal “captive-bred hunting”. Opponents call it “canned hunting” and consider it deeply unethical with no conservation value.

In a worldwide media outcry it emerged last week that a dominant, black-maned, 13-year-old male lion nicknamed Cecil who was exceptionally popular among visitors to Zimbabwe’s Hwange National Park was illegally shot by an American trophy hunter.

Walter Palmer, a dentist from Minnesota in the US, and professional hunter Theo Bronkhorst lured Cecil into the Gwaai concession adjoining the Hwange National Park by tying an animal carcass to the front of a vehicle. Palmer is then believed to have shot the lion, which was wearing a tracking GPS collar as part of a long-running research project, with a crossbow. It took the hunters approximately 40 hours to track the injured lion before they could finally kill it with a gunshot.

Palmer, who has since become the centre of intense public condemnation, claims he thought that he was conducting a legal hunt and that he was unaware of Cecil’s iconic and protected status. It is believed he paid between $45,000 and $50,000 for the hunt. No stranger to wildlife crime, the dentist who has previously been cited for fishing without a licence and who in 2008 pled guilty to a federal charge of poaching a black bear in Wisconsin, is known to have killed a rhino and a leopard in earlier hunts.

Bronkhorst, whose hunting licence has been suspended, was charged with failing to prevent an illegal hunt at the Hwange Magistrates Court on Wednesday. After pleading not guilty, he was released on bail with a trial date set for August 5. If found guilty he could be sentenced to up to 10 years in prison. Honest Ndlovu, the owner of the land where the hunt took place, faces similar charges.

Under mounting pressure over the killing of Cecil and the revelations in Blood Lions, cracks seem to be appearing in the traditionally united front presented by the trophy hunting lobby. Individual hunters have started to publicly express their disapproval of the captive lion breeding and shooting business, and in unparalleled move, Professional Hunters’ Association of South Africa (PHASA) president Hermann Meyeridricks told the members of his organisation that its “position on lion hunting is no longer tenable”.

Meyeridricks suggests that PHASA has made “little demonstrable progress” in getting the government and predator breeders to “clean up” the industry and “to improve its standards and conditions to a generally acceptable level”. He also acknowledges that opposition to the hunting of bred lions is not restricted to “just a small if vociferous group of animal-rights activists” anymore, but that “the tide of public opinion is turning strongly against this form of hunting”.

Criticism has also come from the international hunting fraternity, including Europe’s Nordic Safari Club, which has removed all lion trophies hunted in South Africa from its official record books. Industry insiders allege that disreputable activities extend beyond lion hunting, suggesting that trapped caracals and leopards as well as crocodiles from breeding farms are being used in canned hunts.

According to Will Travers, the president of the Born Free Foundation, a well-known international conservation organisation: “Cecil’s tragic and meaningless destruction may just be the catalyst we need to take action to end lion trophy hunting and, instead, devote all our energies to conserving a species which, perhaps more than any other, represents the wild soul of Africa.”

The recent scandals are yet to elicit a response from Environmental Affairs Minister Edna Molewa, who has been a staunch supporter of (some would argue an apologist for) South Africa’s captive lion breeders and hunters.

But clearly there are growing concerns in the government about the situation which is developing in the year before the country hosts the influential 17th Conference of Parties to the Convention on International Trade in Endangered Species of Wild Fauna and Flora and at which the South African delegation may well present a very controversial proposal to legalise the international trade in rhino horns. Global outrage over trophy hunting controversies and a declining reputation of the local hunting lobby are sure to present severe hurdles to getting such a provision passed at the conference.

Earlier this month, Molewa invited various pro-hunting stakeholders to a meeting in order “to address widespread and mounting public concern” and to establish “a forum to investigate a number of issues related to the lion industry in South Africa”. DM

Photo: An undated handout photo provided by the Zimbabwe Parks and Wildlife Management Authority on 28 July 2015 shows Cecil, one of Zimbabwe’s most famous lions, who was reportedly shot dead by US hunter Walter Palmer, of Minneapolis, Minnesota, USA, according to reports in the UK media. (EPA)