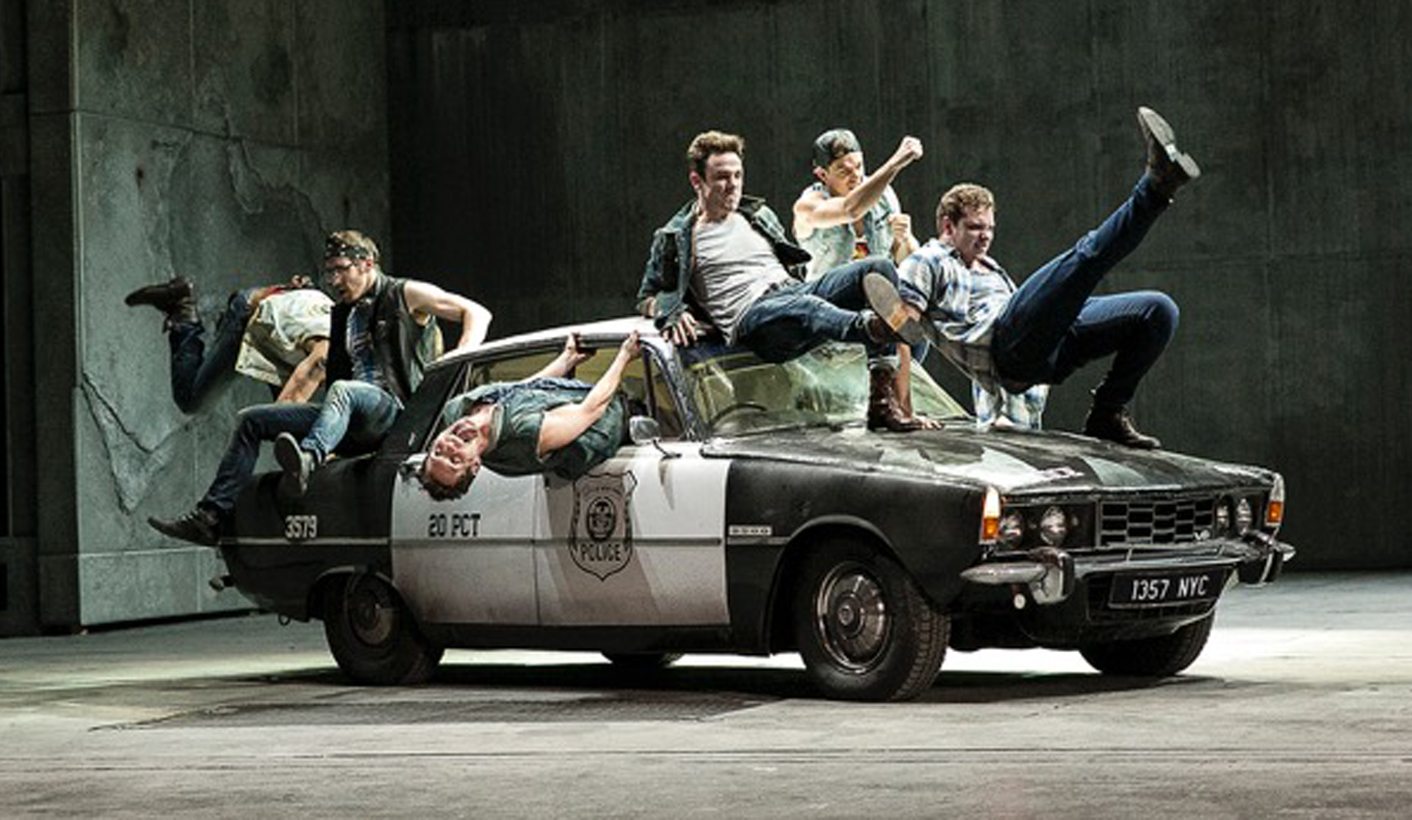 The ultimate masterpiece of American musical theatre, West Side Story, has just opened in Cape Town. Produced by Eric Abraham and the Fugard Theatre, this is a mammoth and hugely ambitious multimillion-rand production which showcases extraordinary local talent from set, lighting, sound and costume design to choreography and musical and stage performance. It's a costly gamble for the producers in a lean and mean economic climate. By MARIANNE THAMM.

The average American musical regards itself as a business rather than art. Shallow storylines, a few catchy, “memorable” show-stopping ballads or anthems, some garish sets, lighting and colourful costumes and, hey-presto, we have a hit on our hands. Many musical productions arrive on our shores with a blueprint created elsewhere and are simply transplanted onto a South African stage. Local casts have, on the whole, done these productions proud.

Not so with this revival of Arthur Laurents’, Leonard Bernstein’, Stephen Sondheim’ and Jerome Robbins’s West Side Story of 1957. This is what is known as a “bottom up” production in the industry. Everything about this colossal endeavour – which was two years in planning – was done locally, exploiting a range of some of the best talent in the industry. The programme note explains that creating the stage for this production required 10,784 kilograms of steel, 4,500 bolts, 5,800 kilograms of aluminium and 4,900 “man hours”. It is a majestic and truly awesome (in the true sense of the word) set, designed in part by the internationally lauded designer Johan Engels, who died in November 2014 before being able to complete his vision.

West Side Story – based on Shakespeare’s Romeo and Juliet – and about a turf war between two inner-city gangs, the Sharks and the Jets – also heralds a more genteel turf war at the state-subsidised Artscape Theatre in Cape Town, where veteran producer Pieter Toerien has reigned supreme as the king of local musical productions. With West Side Story the relatively young Fugard Theatre and its producer, Eric Abraham, have announced their arrival with a almost-perfect, albeit expensive and spectacular bang.

West Side Story is not just about the business of the musical, it is also about the art. Underpinning the production, wherever it is revived in the world, is the rock solid foundation of the book by Laurents, Bernstein’s sublime dissonant score (which underpins the tragedy of the story), the enduring lyrics by Sondheim and hints of Robbins’ original choreography – possibly the only part of this music/opera hybrid open to modern interpretation – encompassing the piece’s infectious Latin/balletic flavour.

This is a production infused with vitality, gritty realism and spectacular stagecraft which makes full use of the cavernous stage at the Artscape Opera House. The themes of West Side Story too are enduring; love, tragedy, racism, immigration and gang rivalry. In his programme note, Wild notes that the violent subject matter hits unnervingly close to home in South Africa in 2015. Indeed just last week a Hard Livings gang boss was shot and killed in Rocklands, Mitchells Plain, giving rise to renewed tensions in the area.

And it is this notion of the shattered dreams of a generation of young people unable to escape the social and political currents of the time that drive West Side Story and render it still relevant in the 21st century.

The musical is buoyed by a youthful energy with its simmering underlying tensions and hostilities and the superb all-round ensemble cast bring it magically to life. There is not a wasted moment on the stage, not a single superfluous action, motion, lighting or scene change as each flows magically and seamlessly into the next.

Jonathan Roxmouth, one of the country’s leading musical performers, plays Tony, a young man desperate to escape his fate as a potential member of The Jets (Shakespeare’s Capulets) – a gang of young white Americans. Their rivals are The Sharks (the Montagues) a gang of recently-arrived Puerto Rican immigrants.

Roxmouth’s rendition of Something’s coming – a song of hope – is searingly beautiful as it sets up the dramatic irony of the events that are about to unfold.

University of Cape Town Opera School graduate Lynelle Kenned is superb as Maria, who Tony spots at a local dance. The two instantly fall in love but it is a youthful passion that we know is doomed. Roxmouth and Kenned capture the vulnerability of these two young people caught up in currents beyond their control. Roxmouth makes for an angelic, clean-cut Tony, unlike the rest of the tattooed, rough Jets, while Kenned beautifully captures Maria’s subtle determination to follow her heart.

While Tony and Maria are essentially sketchily rendered – there is little depth to either of them apart from their love-struck obsession with each other – they do get to perform some of the show’s most memorable songs including Maria (which received extended applause after Roxmouth sighed out the last Mariaaaaaaa on opening night).

Bianca le Grange (2002 winner of Idols) dazzles as the feisty Anita, Maria’s friend and the girlfriend of Jets leader, Bernardo, played by Christopher Jaftha. Jaftha brings a charismatic and playful machismo to his part and is enthralling to watch. Le Grange’s Anita provides the piece with its humour and sass but also with much of its pathos and pain.

The palette here is grey and industrial for the outdoor street scenes, contained within the huge concrete slabs that line the stage. With a subtle shift of lighting, the space is transformed into a vibrant dance hall and then later again miraculously alters in plain sight as the walls glide away to reveal the interior of the sewing room where Anita and Maria work – illuminated gloomily by desk lamps but rendered magical with colourful fabrics. There is a muted elegance to all of the costumes with hints of the ‘50s and the gang colours that separate each group from the other.

Lighting by Cutts in particular is a key to this production and there are moments that are simply breathtaking.

After act one the musical quickly hurtles towards its tragic end and once again the stage becomes as much a part of the dazzling spectacle as the dancing and choreographed fight scenes – all beautifully contained by the Cape Town Philharmonic Orchestra with its violins, cellos, horns, flues, bassoons, trumpets, trombones and percussion.

Particularly noteworthy was the performance of one of the key songs in the piece Gee Officer Krupke, where the subversive undertone of the show is revealed. In a beautifully and hilariously choreographed set-piece, The Jets use the unconscious Officer Krupke as a sort of ventriloquist’s dummy to act out the various figures of authority – from social workers to psychologists and judges – who have categorised these young people as delinquents. The song also offers a critique of late-industrial capitalism which forces parents to work long hours at badly paid jobs, making them unable to take care of the emotional and psychological needs of their children.

There are, of course, all the memorable songs including Something’s coming, the perennially gorgeous Maria in which Roxmouth’s voice soars, America (that anthem to living in the US) , Tonight, I feel pretty, Somewhere as well as Gee, Officer Krupke. It is difficult to single out performances from this hugely accomplished ensemble cast (apart from those already discussed above).

If there is one minor flaw it is in the pace of the opening scene in the prologue, where the gang rivalry is set up during a basketball game. Here the tempo flags and the choreography felt denuded of the energy required to set up the simmering tensions that lead to the tragic end. But it all soon recovers.

It has been a long time since Cape Town audiences have been offered a musical of this scale and spectacle and it is particularly risky in an economic climate where disposable incomes have been eroded. But if you do have some cash to spare, do yourself a favour and go and see this showcase of local talent at its best. It’s cheaper than buying a ticket to see it on Broadway or in the West End and it is every bit as brilliant as any international production, if not better. DM

All photos by Jesse Kramer.