Obama at the African Union: Adoration, adulation, and a plan to fix Africa 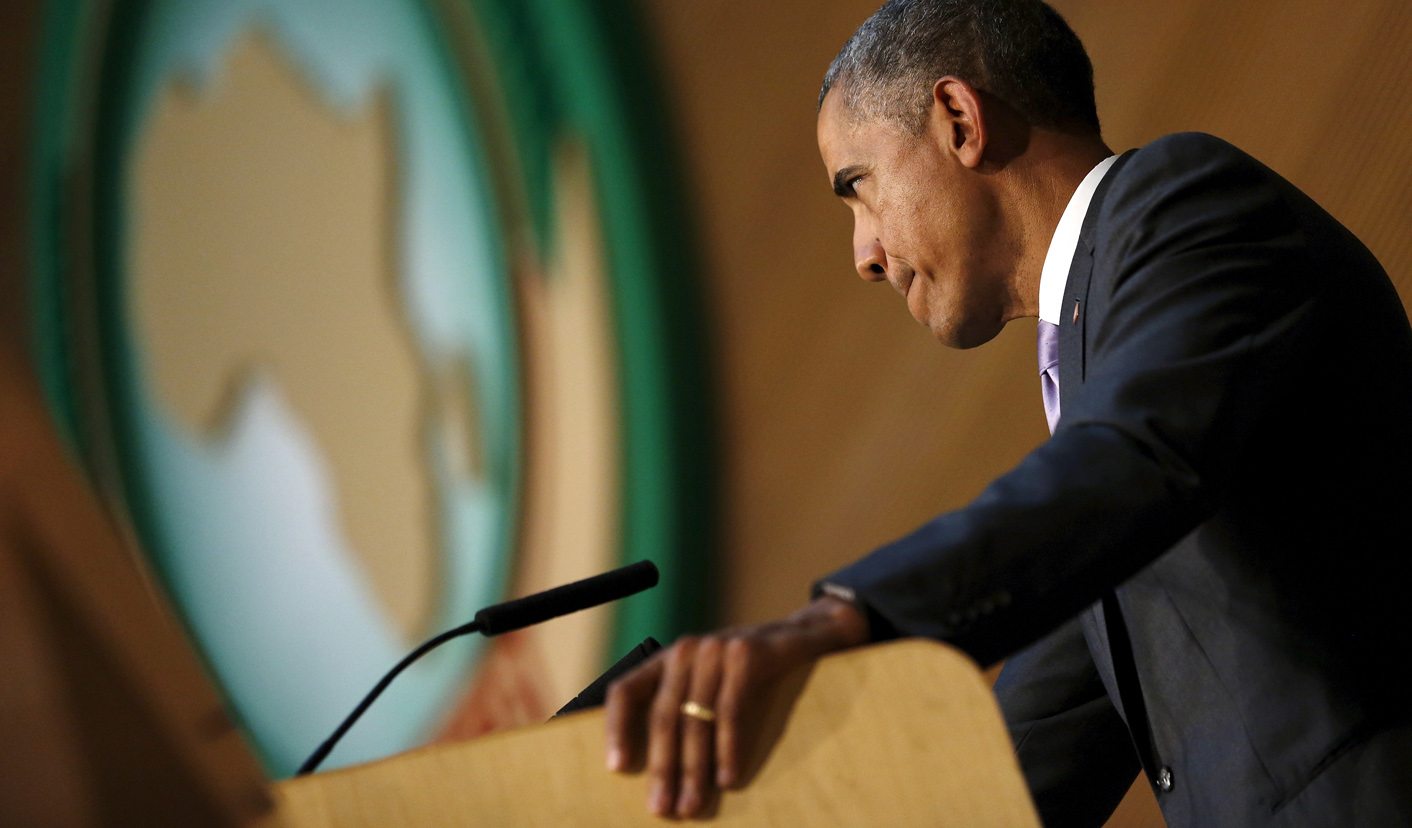 He came. He spoke. He left with a standing ovation. The adoration was unmistakeable: despite his criticisms, the African Union loves Obama. SIMON ALLISON reports on the American president’s hard-hitting speech, and his five-step plan to fix Africa.

ADDIS ABABA – When he was finished, after nearly an hour at the lectern, the audience rose as one. “If you build the Africa you believe in, you will have no greater friend than the United States,” Barack Obama concluded, to raucous cheers and even a few ululations. Finally, the most powerful African in the world had come home – and he did not disappoint.

This was perhaps the most widely-anticipated speech of his Africa tour, likely the last time we’ll see him on the continent as president. His trip to Kenya reaffirmed Obama’s Kenyan-ness, but his visit to the lavish headquarters of the African Union – the first by a sitting US President – was more important: it affirmed his African-ness.

Nkosazana Dlamini-Zuma, chairperson of the African Union Commission, seemed to speak for the continent when she said in her introduction: “Although we welcome you as president of the US, we also claim you as our own.” Dlamini-Zuma spoke at length about Africa’s achievements and challenges, and on any other day her speech would itself have made headlines. But this was Obama’s moment, and nobody was listening.

“Thank you, thank you so much,” said Obama as he rose to speak, framed by American and AU flags and looking genuinely affected by the welcome.

He is an extraordinary orator. It was a long speech, but not once did it ramble, nor did he lose anyone’s attention. And it was more direct, and more critical, than perhaps any other that has been delivered in the AU’s inner sanctum. Not even Ethiopia’s Prime Minister Hailemariam Desalegn, the only head of state in attendance, was immune from a few veiled – and some not-so-veiled – barbs.

Obama noted Africa’s progress, and also the precariousness of this progress, but for him the continent’s greatest challenge is not conflict or human rights or development – although these are all part of it. It is demographic.

“Africa’s population will double, and many of them will be young. On one hand this can bring tremendous opportunities…the economists will tell you that countries, regions, continents grow faster with younger populations. It’s a demographic edge, an advantage. But only if those young people are being trained. We need only to look at the Middle East or North Africa to see that large numbers of young people with no jobs and voices can fuel instability. The most urgent task facing Africa today, and for decades ahead, is to create opportunities for this next generation. This will be an enormous undertaking. Africa will need to generate millions more jobs than it’s doing right now, and time is of the essence.”

Fortunately, the US President has a plan to fix this. “As your partner and your friend, I’m going to suggest several ways we can meet this together,” he said.

Step one: unleash economic growth by making Africa a more attractive destination for trade and investment. “Many of your nations have made important reforms to attract investment, and that’s been a spark for growth. But in many places in Africa it’s still too hard to start a venture, to start a business. Governments that makes reforms to make starting business easier will have a friend in the US,” he said. Obama used this opportunity to take a swipe at China: “Real economic partnerships have to be a good deal for Africa…that’s the kind of partnership America offers.

Step two: end corruption. “Nothing will unlock Africa’s economic potential more than ending the cancer of corruption. This is not unique to Africa – corruption exists all over the world. But here in Africa, corruption drains billions of dollars from economies, money that could be used to create jobs and build hospitals and schools.”

Step three: get democracy right. “Democracy is not just formal elections,” Obama said, to a collective intake of breath from the many Ethiopians in the audience, still smarting from recent polls that handed the ruling party 100% of seats in parliament. “When journalists are put behind bars, or activists are threatened, then we may have democracy in name but not in substance.”

On this subject, the president’s most critical comments – which veered off the prepared script – were reserved for leaders who cling on to power. “Let me be honest: I do not understand this. I am in my second term. I love my work…I actually think I’m a pretty good president, I think if I ran again I could win, but I can’t. There’s a lot that I’d like to do to keep America moving, but the law is the law, and no one person is above the law, not even the president. I’m looking forward to life after being president. I won’t have such a big security detail, I can go take a walk, I can spend time with my family, I can find other ways to serve, I can visit African more often.

“I don’t understand why people…want to stay on. Especially when they’ve got a lot of money. When a leader tries to change the rules in the middle of the game just to stay in office, it risks instability and strife, like we’ve seen in Burundi. This is often just a first step down a perilous path. Sometimes you’ll hear a leader say that I am the only person who can hold this nation together. If that’s true that leader has failed to build that nation.”

Step four: eliminating insecurity. “Africa’s progress will also depend on security and peace – because an essential part of human dignity is being safe and free from fear…As Africa stands against terror and conflict, the United States stand with you.” Obama mentioned progress being made in Somalia, central Africa and the Lake Chad region, but had harsh words for the leaders of South Sudan, who haven’t shown “any interest in sparing their people from this suffering or in reaching a political solution”.

Step five: protect human rights. “Africa’s progress will depend on upholding the human rights of all people – for if each of us is to be treated with dignity, each of us must be treated equally,” he said. Most urgently, Africa needs to protect the rights of women and girls. “As a father, I believe that my two daughters ought to have every chance to pursue their dreams, and the same goes for girls here in Africa. We can’t let old traditions [like female genital mutilation, early or forced marriage, or preventing girls from attending school] stand in the way. The march of history shows that we have the capacity to broaden our moral imaginations.”

Obama was less convincing when speaking of the ways in which America is helping Africa, coming across as more of a salesman that head of state. He spoke of various American-led initiatives on health, power and education, and of how at the recent Financing for Development Conference “the US helped forge a new compact for financing that helps fuel development.” Astute observers will remember that it was American negotiators who blocked the G77 group of developing countries’ proposal to reform global tax rules, with potentially devastating consequences for their potential to control illicit financial flows.

Nonetheless, he ended on a high, and to cheer which nearly raised the roof of the Nelson Mandela Plenary Hall. “Unleashing growth that creates opportunity. Promoting development that lifts people from poverty. Supporting democracy that gives citizens their say. Advancing the security and justice that delivers peace. Respecting the human rights of all people. These are the keys to progress, in Africa and around the world. This is the work we can do together. And I am hopeful.”

By the time he’d finished, he wasn’t the only one. DM

Photo: U.S. President Barack Obama delivers remarks at the African Union in Addis Ababa, Ethiopia July 28, 2015. Obama toured a U.S.-supported food factory in Ethiopia on Tuesday on the last leg of an Africa trip, before winding up his visit at the African Union where he will become the first U.S. president to address the 54-nation body. REUTERS/Jonathan Ernst