Don’t let the baby eat carbs, and other reasons why A...

Don’t let the baby eat carbs, and other reasons why Avaaz won’t change the world 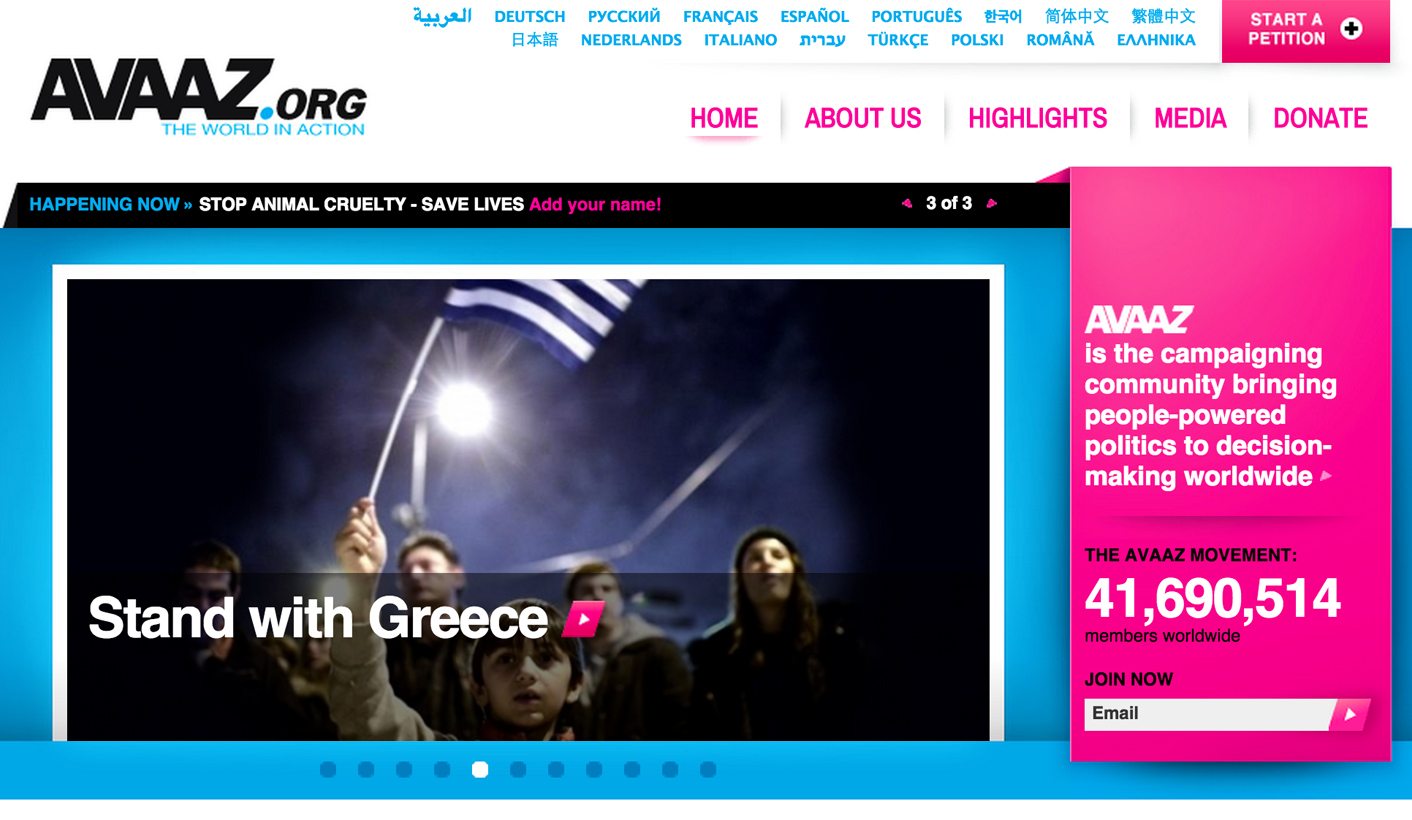 Remember when all your friends had a great dot.org idea, all of which were one click away from transforming the world into a rainbow-tinged Utopia? Me neither. But then my circle doesn’t include an Oxford/Harvard/Kennedy School Brahman like Ricken Patel, founder of Avaaz. The site focuses on change through online petitioning, and it is currently “helping” concerned South Africans battle the African National Congress’s (ANC’s) draconian proposed internet regulations. But middle-class South Africans don’t need help to not leave the house for a good cause. RICHARD POPLAK wonders if Avaaz hasn’t finally perfected the art of whining from behind electrified walls.

He had fallen under a spell and was writing letters to everyone under the sun. He was so stirred by these letters that from the end of June he moved from place to place with his valise full of papers … Hidden in the country, he wrote endlessly, frantically, to the newspapers, to people in public life, to friends and relatives and at last to the dead, his own obscure dead, and finally the famous dead.

Let’s begin with the definition of a social media mishap: a professor/celebrity foodie dispenses infant nutritional advice over Twitter. The perpetrator in question is none other than Tim Noakes, prince of the low-carb, high-fat diet craze, and the man who pummelled middle-class South African bookshelves with The Real Meal Revolution. The scenario: a mother wanted to know what she should start feeding her baby, and in response Noakes advocated “low carbohydrate, moderate protein, nutrient-dense food”. The tweet was reported to the Health Professions Council of South Africa, and a hearing was set for early June.

The issue is not whether we should be turning our babies into svelte supermodels before they can walk. Nor is it whether hamburgers are healthier than tuna salad garnished with air.

The issue is whether this is an issue.

And yet, one of those whizzbang new “agents for social change” — AKA a website with an .org at the end of it — believes Tim Noakes’s baby food Tweet is worthy of an online petition in support of the professor and his “quest to improve eating guidelines”. Or, rather, the website’s community believes so. The 16,006 “signatures” “signed” in support of Noakes cited the 150,000 copies of Real Meal he’s sold, and the “new book on infant feeding” he’s been working on “for the past year”. The petition hopes to reach 20,000 signatures backing this “initiative” at some point in the near future. This is what Avaaz.org does—blast petitions into the ether and, in some cases, develop robust letter writing campaigns. Each and every cause scrolling across their website’s carousel — “Stop food waste, end hunger!”; “ISA: Save our Oceans!”; “From G7 to Paris: Goodbye Fossil Fuels!”— would bring a smile to the face of the most hardened progressive. This was what the internet was supposed to be about! Coding change, connecting people, rewiring the world.

But anything is not possible. Avaaz proves the limitations of liberal discourse in the internet age as definitively as any site online. Avaaz has entered the South African conversation on a number of occasions: there are, after all, many animals in this country, and therefore numerous opportunities to save them. But their most recent South African campaign is somewhat different. Entitled “SA internet ???? censorship”, an e-mail blast sent out to Avaazers and their ilk went like this:

A new set of regulations threatens the very essence of our internet freedom. They want to police and crack down on our digital democracy – but we are thousands of South Africans getting this email and we have the power to bring down their barricades.

If the Film and Publication Board’s (FPB’s) new internet regulations are implemented, they’d have the right to review and classify almost every blog, video, and personal website — even Avaaz campaigns like this one. Think apartheid-era censorship, reloaded and super-charged for an all-out assault on our digital freedoms.

Public consultations end this week, and the FPB is on the back foot because their regulations have been so widely ridiculed — a massive viral response could finally pull the plug on these dangerous regulations.

So many questions. Who, I wanted to know, are “they”? What, I wondered, is a “digital democracy”, when did we get one, and what does “they’d have the right to review and classify almost every blog, video, and personal website” actually mean? The above six paragraphs are classic Avaaz, but also classic internet activism — a context-free mulch of “holy fuck!” declarations, followed by an invocation to post something on your Facebook status update while hysterically tweeting about the evils of something.

And here’s the thing: the FPB’s proposed regulations are extraordinarily unpleasant. But they require more than a shouty e-mail to decipher. (Ed — Exactly what Daily Maverick’s Julie Reid masterful presented in Africa’s worst new Internet Censorship Law: Everything you don’t want to know – but need to) They also fall into a far broader political story — the snail-like but unceasing attempts of the Zuma ANC to roll back freedom of expression, especially in the media. Ultra-conservative and ham-fisted, the FDB’s attempts at remaking the SABC circa 1988 is re-upped National Party nonsense. Things like:

5.1.1 Any person who intends to distribute any film, game, or certain publication in the Republic of South Africa shall first comply with section 18(1) of the Act by applying, in the prescribed manner, for registration as film or game and publications distributor.

5.1.2 In the event that such film, game or publication is in a digital form or format intended for distribution online using the internet or other mobile platforms, the distributor may bring an application to the board for the conclusion of an online distribution agreement, in terms of which the distributor, upon payment of the fee prescribed from time to time by the minister of the Department of Communications as the executive authority, may classify its online content on behalf of the board, using the board’s classification guidelines and the Act …

But why did Avaaz choose not to include these clauses in the e-mail? Does Avaaz assume that Avaazers are too daft or too time-constrained to actually digest all the legalese? Indubitably. But if so, we must all die in a fiery pit, along with our classification committee of the board for classification-approved YouTube bar-mitzvah videos.

This is a planet for adults, and citizenship is an active process. Almost every day in this country, people leave their homes in poorer communities in order to burn shit on the streets of their community. In quieter climes — in the middle-class enclaves in which we are told revolutions typically germinate — nothing happens. Nothing at all. Crickets.

One begins to wonder if internet slacktivism isn’t a genius ploy by the establishment to geld those who would, in years past, have hit the streets en masse, looking to change the way government operates. The thought of something spontaneous — a rearing back against government policy — is almost laughable. Next month, Zwelinzima Vavi will host an “anti-corruption march,” but the amorphousness of the issue almost seems pulled from Avaaz’s playbook:

What are we gonna do about it?

This stuff has become a cliché, but it doesn’t make it any less dangerous. This week, South Africans have to fight on two digital fronts. The first is the FPB and their attempts to equate our family videos with pornography. And the second is Avaaz and their endeavours to help us click our way to freedom. We need the ‘net, but we don’t need the ‘net, if you hear what I’m saying.

The rules of history are: occasionally things need to be burned. No amount of clickbait is going to change that. Just ask Noakes. Last I checked, fat babies were still a good thing. DM