Zwelinzima Vavi: Man on the march 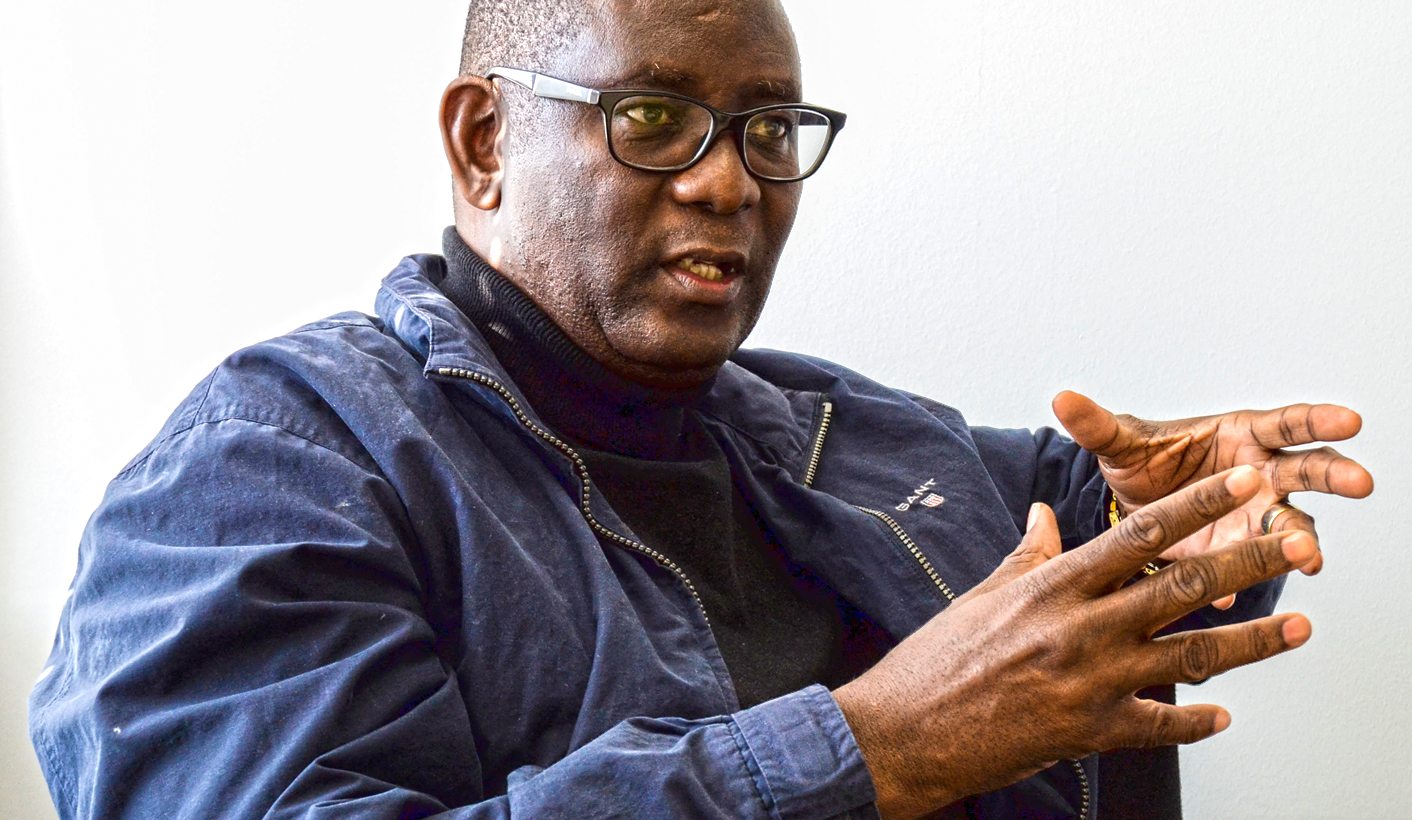 This week’s Cosatu special national congress was the first major event of the federation that Zwelinzima Vavi did not attend in its 30-year existence. While he was being lambasted at the congress, he spent the day sleeping, having lost all hope that his axing and the expulsion of metalworkers union Numsa could be reversed by the delegates. Vavi is now planning his life after Cosatu, one in which he hopes to be South Africa’s civil society's campaigner-in-chief and champion of a new trade union movement. But politically, he is still struggling to make the break from the organisation he loves. By RANJENI MUNUSAMY.

We find Zwelinzima Vavi at his new “operations centre” in downtown Johannesburg. Unlike Cosatu House in Braamfontein, where there is always a bustle of activity, the place Vavi now works from has just a few people around in sparsely furnished offices. His office at Cosatu House was a shrine of Cosatu memorabilia – flags, plaques and pictures from the early years. The hallways were lined with framed cartoons, mostly the work of Zapiro, of events and moments in history immortalised in satire.

There is nothing yet in the new offices indicative of a past or a future. It is a canvas waiting to be painted.

It is just two days since the end of Cosatu’s special national congress. After three years of intense battles in the federation, which led to Vavi being subjected to numerous investigations, a disciplinary procedure and eventually being expelled, it would appear that he has eventually made peace with the fact that he is no longer part of Cosatu. His allies in the National Union of Metalworkers of SA (Numsa) and eight other unions fought through the courts to have the special congress convened, believing it would result in the mass membership of Cosatu rebelling against the leadership.

What happened was the opposite. The congress isolated Vavi and Numsa further and rallied behind Cosatu president S’dumo Dlamini and his camp.

But Vavi says the game was up when the South Gauteng High Court ruled that Numsa’s application to appeal its expulsion at the special congress was not urgent, meaning the union could not attend this week’s meeting. He said with the 365,000 strong union excluded, the congress was tilted in the other faction’s favour. Vavi also claims that the union delegations were fixed to ensure that only those willing to toe the line of the dominant faction were allowed to attend.

“If they allowed the provinces to appoint people using the usual criteria, there would have been a different outcome,” Vavi says. He claims individual unions are being fragmented, with widespread purging and some members breaking away to join or form rival unions. Therefore only firm loyalists were handpicked as delegates, Vavi says.

I point out that even if this were true, there was an overwhelming vote in favour of the credentials report, which was indicative of support for Dlamini’s group. Vavi agrees his supporters were outnumbered and outgunned. With Numsa being excluded as the biggest affiliate and other blocks of his supporters being ousted, such as from teachers’ union Sadtu in the Eastern Cape, the balance of forces would inevitably have been in Dlamini’s favour. But this was not representative of popular sentiment on the ground.

Vavi says his supporters fought hard at the congress for a vote by secret ballot because many delegates from other unions indicated they wanted to support them. They feared being victimised if they voted openly through a show of hands against their union leadership. “They will be dismissed from their unions and even in their workplaces. This is a big problem because they would be dealt with, even as employees,” Vavi said.

He was highly critical of the Cosatu discussion document on “unity and cohesion” that formed the basis of discussions at the congress. “It was apathetic joke,” Vavi said. “It had no politics, no connection with reality in the federation… When they say ‘unity’, they mean the opposite.” The document did not deal with the underlying reasons why Cosatu was divided and the fact that the split was “engineered” by people outside the federation.

He said his supporters among the rebel unions that have been boycotting central executive committee meetings since the expulsion of Numsa “staged a brilliant fight on the floor”. The outcome of the congress had convinced the leadership of many of these unions that the Cosatu of old was dead and that they did not belong in the federation now, Vavi said. The November ordinary Cosatu congress, where there would be leadership elections, would go much the same way as the special congress did; a vote by secret ballot would not be allowed there either, he said.

The conduct of Cosatu at the congress was alien to the way it had always operated. “It’s a new Cosatu in my view. Everything is new and unprecedented,” Vavi said. This included the barring of the media from the meeting hall on the first day. “The federation is scared of an open, democratic process, scared of the media, scared of its members. They are manipulating processes behind closed doors… and chasing workers away.”

Vavi came in for a heavy beating at the congress over the sex scandal that he was involved in two years ago. Two women delegates from Sadtu and transport union Satawu spoke strongly against the exploitation of women in the workplace and condemned Vavi for evading disciplinary action for having sex with a Cosatu staff member at the office. Vavi says the issue is being used as a “political tool”. “They want to shut me up and present me as immoral.”

He said people who raised this issue continuously were not doing so because they were champions of a “non sexist gender conscious revolution”. “They raise it only because they have a political opponent to beat… The people shouting in the mikes were more than likely asked to do so by men who have children from staff members in the offices themselves.”

“It is a political baton to try and deal with me. I don’t take it seriously. If it were raised by feminists from principled point of view, it would be different. I agree it’s a problem and that is why I apologised over and over,” Vavi said.

So what will Zwelinzima Vavi do now?

“I am going to spend all my energy working out what’s next for the trade union movement,” Vavi says. The plan is to convene a workers’ summit within the next few months to decide, among other things, on whether to form a new federation. Vavi said he is consulting with unions from inside Cosatu and outside on this “broad” workers’ summit.

But a new militant labour federation is not the only ball Vavi has in the air. He is one of the key organisers of an anti-corruption march on 19 August. He said civil society needed to be more engaged in tackling corruption and putting pressure on government to root it out. But activism also needs to extend to other issues such as health, education, the looming water crisis and the appointment of heads of Chapter Nine institutions. “Who should be the new Public Protector next year and the ombudsman for intelligence should be matters the public participates in,” Vavi said.

So a man perpetually on the march then?

“I would like that. The champion of civil society. The marcher,” Vavi says. “The ideal Cosatu would be militant in the street. It would encourage active citizenship. It would be marching to ensure accountability”. Such activism and campaigns would build a new crop of leaders, educate people and keep society engaged, he said.

And what about his political career? Had Vavi remained in the alliance fold and agreed to play nicely, he was destined for a senior position in the ANC. He says since his expulsion from Cosatu, the only ANC leader who tried to contact him was the national treasurer Zweli Mkhize.

While Vavi says it is difficult to make an emotional break from the ANC, his disillusionment with the party is immense. He says the only people who make him optimistic about the ANC are the Gauteng leaders such Premier David Makhura and Education MEC Panyaza Lesufi. “When they are in the media, I feel this is the real ANC…. This is what this country should be about. But it is happening only here. I don’t see where else I can be inspired. At a policy front, I celebrate nothing in the ANC,” Vavi said.

He said he was however worried that the Gauteng ANC would take a beating at the upcoming ANC national general council, in much the same way things turned out at the Cosatu special congress.

Vavi is no doubt battered and bruised, emotionally and politically. “It is pretty black and dark outside, I must say,” he says.

But Vavi is determined to pick himself up, dust himself off and make a comeback. He wants to reclaim his space as a dominant voice in society and champion the plight of the workers and poverty-stricken. He has some powerful enemies and a lot less people in his contact book than he used to.

Perhaps he waited far too long to set off on this journey. Or perhaps this is exactly the right time to step forward. Time will tell how many people join his march back to political relevance. DM