SA’s genetically modified maize: Here’s what you should know about it 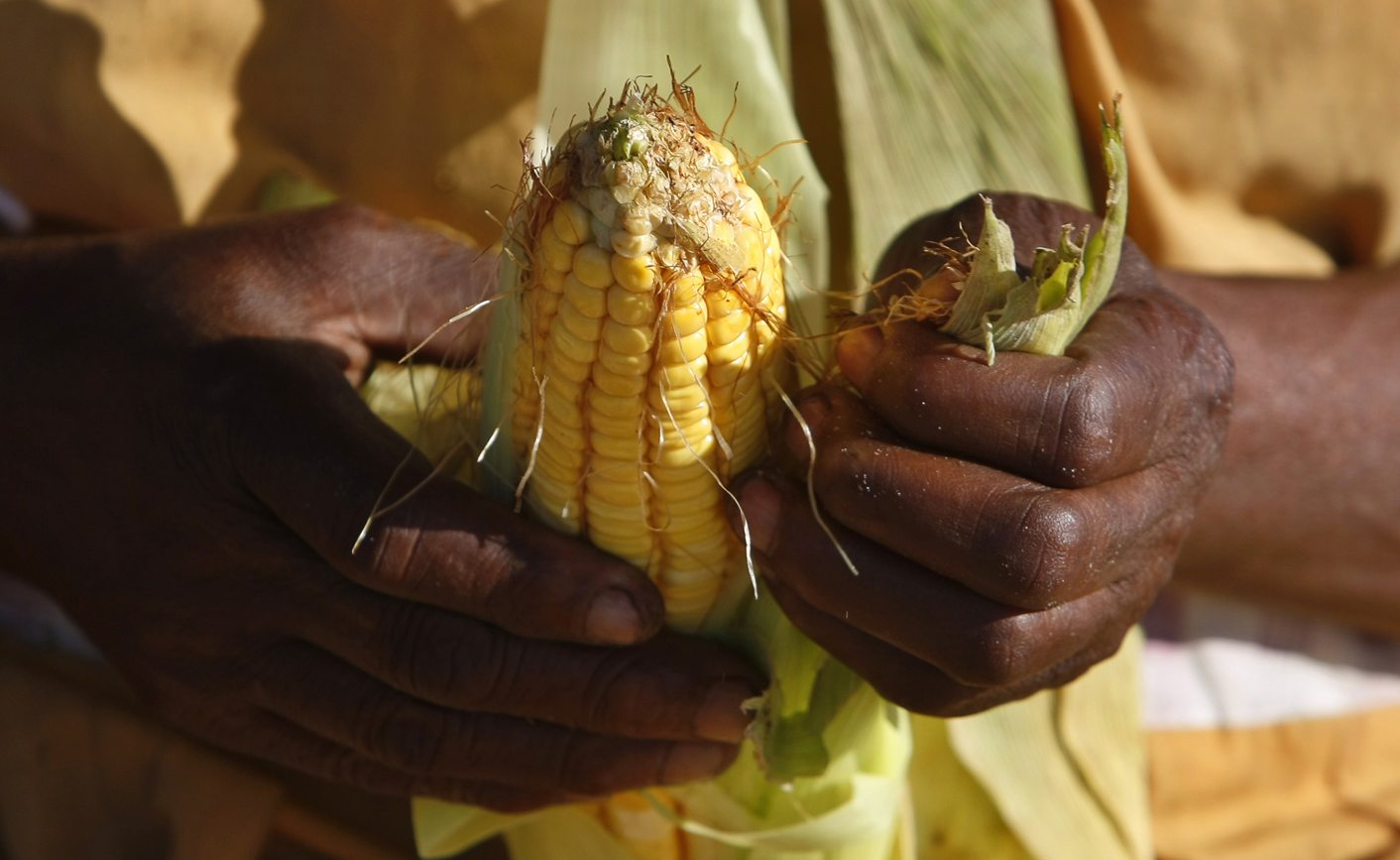 Between 70% and 80% of maize consumed in South Africa is genetically modified, and ours is the only country in the world whose staple is primarily GMO. So what? Three decades after its adoption, GM maize remains contentious. ANDREA TEAGLE takes a look at some of the risks and benefits of South Africa’s beloved mielie today.

The Genetically Modified Organisms (GMO) Act of 1997 sowed the way for generations of genetically modified cotton and mielies. The catch phrase ‘GMO’ tends to strike fear of the unknown into the hearts of weary consumers: ‘modified? Modified how?’ In the case of maize, the GM crops planted and consumed in South Africa are known as Bt-crops, so named because they contain a protein (Bt) produced by a common soil bacterium, Bacillus thuringiensis. The protein is the bacterium’s weapon against hungry bugs; when they digest it, they die. The transferal of this internal defence system to maize cut back the need for pesticides (which themselves have contained Bt as far back as the 1920s). Bt crops have proved highly popular both in the US and globally, with some studies showing a link between Bt-crops and increased yield and variable profit.

Three decades after its widespread adoption, and despite accumulating data, debate around the risks and benefits of Bt maize –and GM foods generally– remains fierce. Objections to Bt crops can be divided into three broad groups: the contention that ‘playing with nature’ is intrinsically wrong; health and environmental concerns; and concerns about how Bt maize is regulated.  This article primarily deals with objections in the second and third groups. (You only need to glance at your Maltese poodle and consider that that ball of fluff was bred from a wolf to realise that humans have been messing with nature for thousands of years.)

So, how safe are our mielies? Contrary to what is often claimed, numerous laboratory and field studies have been conducted to establish the safety of Bt crops. It is well established that Bt is not toxic to animals or humans. Although individual studies here and there – such as the controversial ‘Séralini study’ – have indicated otherwise, the vast body of cumulative research has failed to find evidence of health hazards unique to GM crops. A 2013, University of Perugia study that reviewed data on GM crops from the previous decade concluded, “The scientific research conducted so far has not detected any significant hazards directly connected with the use of GE [genetically engineered] crops”.

Another review, published in the Journal of Animal Science last year, examined the safety of GM food by looking at its effect on the animals that consumed it. The researchers, led by geneticist Alison Van Eenennaam of the University of California, collated animal health and productivity data for a period of almost 30 years (between 1983 and 2011), before and after the introduction of GM feed in the US in 1996. The study’s findings, representing over 100 billion GM-crop fed animals, “did not reveal unfavorable or perturbed trends in livestock health and productivity”. Additionally, no nutritional difference was found in any of the animal or dairy products produced by these animals, which comprise almost 100% of farm animals in the US today.

It is worth noting that empirical data is necessarily limited to the three decades that Bt crops have been in existence. It is possible, if implausible, that GM crops turn out to be carcinogenic over 40 or 50 years of consumption. However, nothing in the composition of Bt maize suggests this. Nutritionally speaking, geneticists argue, proteins are proteins. We know their composition and how they are digested; as far as your body is concerned, where they came from is irrelevant.

In a Pew Research Centre survey conducted in the US and published in January this year, 88% of scientists vouched for the safety of GM foods. By comparison, only 37% of the American public judged GM foods to be safe, while 57% judged them unsafe. The survey highlights the lag between scientific and public opinion, and also the importance of public education and engagement. In South Africa, opinions are more divided; however, understanding of GMOs remains limited.

What about environmental impact? A key environmental concern is the development of insects resistant to Bt-protein. In much the same way that doctors fear drug-resistant strains of major diseases, which could see antibiotics rendered useless, agriculturalists fear the appearance of such ‘super-bugs’. This is already becoming a problem in South Africa. However, arguing that GM should be summarily ditched due to the possibility of Bt-resident bugs becoming widespread is akin to arguing that we should abandon use of antibiotics in case drug-resistant disease strains emerge. What the emergence of super-bugs in this country does highlight is the importance of regulations requiring farmers to plant non-GM maize strips alongside Bt-crops. These ‘refuges’ areas, where stem-borers can feed, have been shown to delay resistance build-up in nearly all target insects. Due to a similar lack of knowledge in the farming community about GM crops, compliance by South African farmers is particularly low. Fortunately, this problem is correctable.

What about the broader ecological impact? It is useful to recall what Bt maize was primarily replacing: maize coated in pesticides. Bt is a highly selective form of pest control, comparable to a highly accurate sniper. Pesticides are chemical bombs, killing bugs indiscriminately. Although recent studies have shown some unforeseen negative impacts on certain insects, overall, Bt crops currently cause less collateral damage. A recent US study, published by PG Economics, concluded that reduced pesticide use associated with GM crops resulted in an 18.1 % decrease in environmental impact, as measured by the Environmental Impact Quotient (EIQ). (EIQ takes into account factors such as toxicity to insects, wildlife, natural enemies etc.) The study also found an associated decrease in greenhouse gas emissions.

Recently, however, the development of herbicide-resistant ‘super-weeds’ is threatening to undermine the net environmental benefit. ‘Super-weeds’ are plants that have developed resistance to herbicides. With the advent of crops that have been genetically engineered to be tolerant to the herbicide glyphosate, overuse of glyphosate has become more common. In a similar way that incorrect or overuse of antibiotics can result in antibiotic resistant diseases, so the liberal application of glyphosate has accelerated resistance build-up in weeds. The result? Farmers need to buy more herbicides, driving up demand and prices toward pre-GM levels.

Again, the issue comes down to unsustainable farming practices. Monsanto has come under massive criticism for irresponsible marketing of herbicides alongside their herbicide-tolerant GM crops, and its subsequent refusal to accept any responsibility for the phenomenon. Although not yet an issue in South Africa, glyphosate-resistant weeds are already creating significant problems in the US, parts of South America and Australia. Sustainable farming practices need to be adopted if we are to ensure that we retain the benefits of GM maize to farmers and customers alike.

Which brings us to the third branch of objections: how GM crops are regulated, and who actually benefits. Bt maize was originally developed by Monsanto to improve yields for large-scale commercial farms in the US. As such, argued a group of researchers in the South African Journal of Science recently, it is not optimal for South African small holders, who do not have the capital to create optimal farming environments. The researchers argue that the Bt maize grown in South Africa is less robust to sub-optimal conditions (drought, low soil nitrogen, poor storage facilities), as certain locally bred, non-GM maize varieties. The yield benefits of Bt maize are also lower in areas where stem-borers are less of an issue. Various government research initiatives – for example the breeding programme ‘Drought Tolerant Maize for Africa’ – are looking into developing cheaper, more robust strains of maize as alternatives for smallholder farmers here.

Another concern for farmers relating to GM maize is seed control. Because Bt corn is patented, farmers are not allowed to recycle seed for the next season. However, it should be noted that while farmers sometimes rely on recycling in times of financial constraint, in general, hybrid seed (non-GM as well as GM) is in any case unsuitable for recycling due to yield drop. Further, farmers in South Africa are not compelled to plant Bt crops; indeed, Bt maize is government-subsidised in order to make it affordable (it would otherwise be about double the price of popular hybrid maize).

Finally, we return to the consumer. As mentioned earlier, understanding of GM foods remains very limited in the South African public. The most recent information on public data comes from a 2005 survey indicated that more than two-thirds of those surveyed had never heard of GMOs. Although understanding has hopefully improved in the 10 years since, continuous public education and engagement is needed to ensue that South African consumers can make informed choices about what they eat. South African labeling laws require that any product containing at least 5% of any GM goods or ingredients must be labeled as such. Given the prevalence of GM foods in South Africa, information dissemination of what exactly GM is, and is not, now needs to follow suit. DM