Psychiatry in distress: How far has South Africa progressed in supporting mental health? 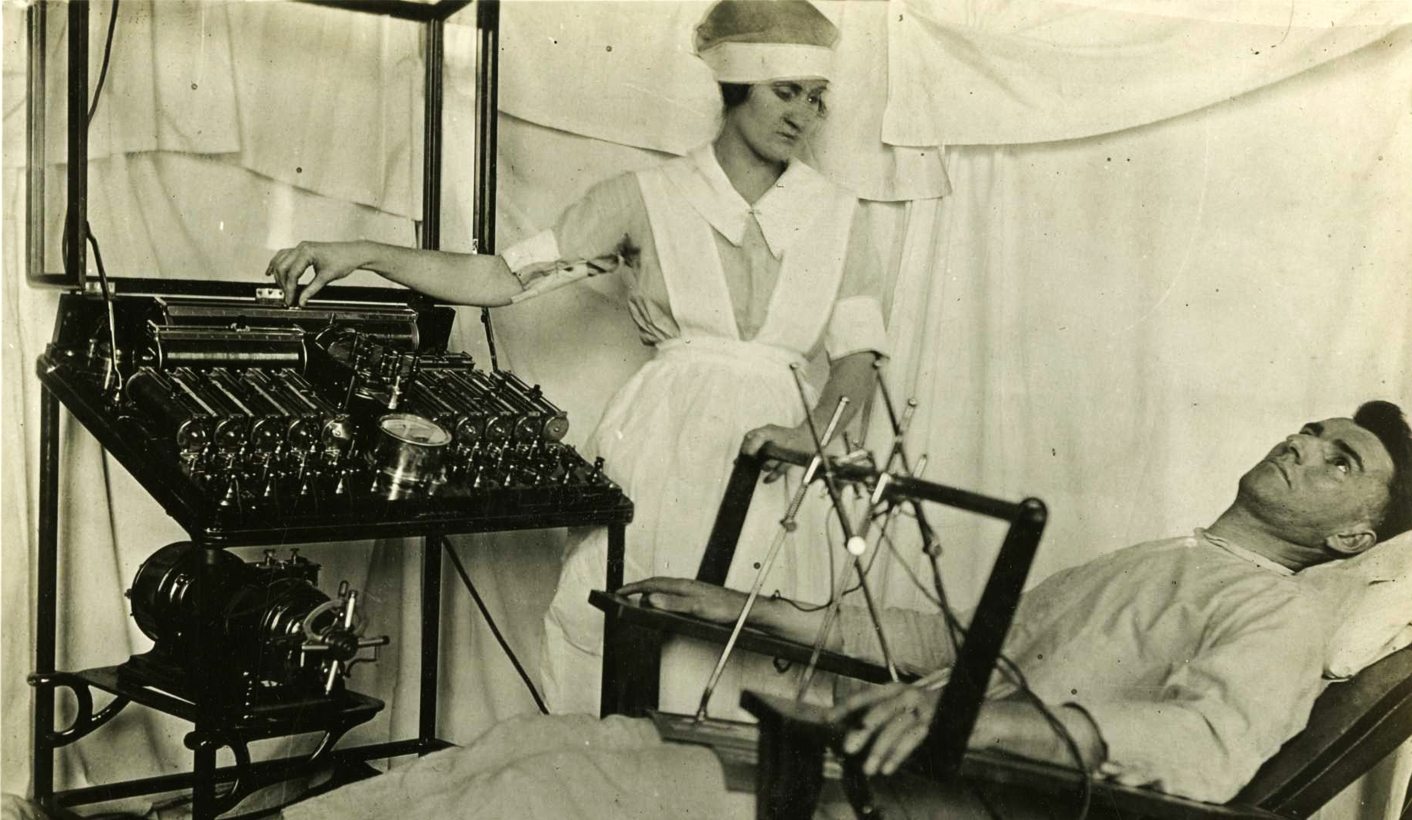 July is Psychosocial Disability Awareness Month. But it seems South Africa is aware of its psychosocial disabilities for all the wrong reasons. By MARELISE VAN DER MERWE.

“There is a feeling that there isn’t enough money for mental health services and research,” he said. “The problem is that not providing enough services and doing the related research on how to optimise such services is vastly more costly than doing so. So every year, we as a country lose more and more money because we haven’t made the right investments in the past.”

Stein is not wrong. Mental health issues cost the economy two to six times the cost of its treatment, or more. South Africans by their millions are receiving psychiatric diagnoses, and yet there is an enormous gap in the funding being given to this area.

When attempting to ascertain the impact of mental health management – or mismanagement – on the country, it is tricky to pin down the numbers. Firstly, one needs to decide on a definition. The term ‘mental illness’ versus ‘mental disorder’ is contested; but Africa Check, speaking to President of the South African Society of Psychiatrists (SASOP), Dr Gerhard Grobler, noted that conditions with a biological basis, such as schizophrenia, fall under mental illness, but professionals mostly referred to the broader category of ‘mental disorders’ which could include conditions such as alcohol and drug dependence.

This difference is significant because South Africa has particularly high numbers of the latter kind: SANCA reports that over 11% of South Africans have substance abuse problems, and several South African studies note high rates of traumatisation and post traumatic stress disorder (PTSD) among youth. Seedat et al, for example, found in a study on exposure to trauma and post-traumatic stress symptoms that the most common traumas in urban African schools were witnessing violence, being robbed or mugged, and witnessing a family member being hurt or killed. A study by Peltzer on rural children in South Africa, meanwhile, found that 67% had experienced a traumatic event, and 8% fulfilled the criteria for PTSD.

The South African Stress and Health (SASH) Study of 2009 is described as the first large-scale population-based study of common mental disorders in the country.

It found the lifetime prevalence for any disorder was 30.3% (i.e. just under a third) and the most prevalent 12-month and lifetime disorders were anxiety disorders, with the highest lifetime and 12-month prevalence rates occurring in the Western Cape.

The Mental Health and Poverty Project (MHaPP), based at the department of psychiatry and mental health at UCT, in turn found that in South Africa, there is a link between poverty and mental disorders. Unfortunately, this means that resources are most constrained where they are needed most. According to a study by Lund et al (2011) 75% of people who live with a mental disorder in South Africa do not receive the care they need.

Health24 gives a sobering overview of psychiatry in South Africa: “[I]n South Africa it is estimated that between four-and-a-half to five million people are suffering from a psychiatric disorder. If you include alcohol and drug abuse in this figure, it rockets to a frightening 15 million people.

“An estimated 20% of children… suffer from a mental [disorder] due to the levels of violence and family problems… and eventually a quarter of the entire population will have suffered from a depressive disorder. Fifty percent of visits to general practitioners are usually due to some sort of mental problem… In South Africa about 10,000 people commit suicide yearly and most of those are young people with economically active lives. And yet only 10 to 15% of people worldwide with mental disorders seek help. To make matters worse, in our country, many of those seeking help find it is not available.”

The trouble in South Africa is that although its mental healthcare policies are progressive, these are not filtering down. For instance, the department of health has reported that 53% of hospitals have been listed to provide 72-hour assessments of psychiatric emergencies, in keeping with the provisions of the Mental Health Care Act. However, reports the South African Depression and Anxiety Group (SADAG), these hospitals frequently don’t have the staff or capacity to provide the care required. Patients end up being admitted to general wards, which adds to the stigma of their illness. Sometimes suicidal patients are turned away due to a lack of space.

In a 2012 study South African psychiatrist Dr Eugene Allers revealed that there were 320 practising psychiatrists in South Africa, a ratio of about 150,000 people per psychiatrist. Just 15% of the population belonged to a medical aid and 200 of the 320 psychiatrists were working in the private sector.

Furthermore, there are not currently resources available for education to reduce stigma. The MHaPP study found that public attitudes toward mental health and treatment are generally negative, despite a supportive and progressive policy framework for mental health. Sadly, despite the legislative developments, the study also found that mental health is not given the priority it needs in South Africa, remaining “low on the public sector agenda”.

Budgets are severely constrained. Most funding for psychiatric research comes from outside South Africa, says Lund. And despite the fact that neuro-psychiatric disorders have been ranked third in their contribution to the overall burden of disease in South Africa – and mental disorders comprise five of the 10 leading causes of health disability – at the last count, just 4% of the national budget was going towards mental healthcare. In 2014, national director of the South African Federation for Mental Health, Bharti Pate,l challenged the national government “to make mental health a national priority by increasing the budget allocated to the mental health sector”.

But according to a statement by SADAG, “Mental health has always fallen at the bottom of budget allocations… in order to achieve successful implementation of the mental health policy, the mental health sector needs to receive a significant increase in funding.”

At the Mental Health Summit held in 2012, pressure was applied for improvements to mental health policy, and the mental health policy framework was developed and approved in Parliament in October 2013. In the funding area, however, progress has been slow. The 2015 Budget referred to increased expenditure in healthcare and specified a desire to “[i]mprove access to and quality of mental health services in South Africa through the implementation of the approved national mental health policy framework and strategic plan, over the medium term”. (p276) There has been a small increase in expenditure to the South African Federation for Mental Health in recent years, but not much. To government-supported mental health NGOs, there is no increase for the immediate future. Nor to the Medical Research Council’s Epidemiology Network on Drug Abuse. No further mental health organisations are listed.

Burns added, “There is little evidence of government abiding by its public commitments to redress the inequities that characterise mental health services.”

A significant further hurdle for patients is the growing problem of drug supplies. There’s the double burden of drug stockouts and the low priority given to psychiatric medication on the Essential Drug List (the medications the state supplies to state hospitals). According to Health24, “The medications for the treatment of psychiatric disorders are severely limited, making… the recovery of some patients less likely.”

Lettie Mabena (pseudonym) told Mail & Guardian of the withdrawals she suffered when her medication was not available for three months, and the SADAG confirmed it dealt with such cases daily.

Keli (not her real name), diagnosed with chronic depression and Borderline Personality Disorder, told Daily Maverick of her own nightmare. “I’m a Tara outpatient. They stock the most generic, or cheapest, of each med. In the past four months they have not had stock of Aropax, a very common antidepressant, twice, and the pharmacists have absolutely no knowledge or sympathy in dealing with this. They simply reply, ‘Get your doctor to put you onto another med.’ I might as well go on to Disprin for all the good that would do… It’s taken 15 years of trial and error of trying me on every medication under the sun to find the medication that works for me. It is not simply a question of taking another antidepressant. And the problem is exacerbated when I, who cannot afford private pharmacy rates for my medication – this would be over R1,000, whereas Tara charges me R35 – then cannot find the same medication at private pharmacies, as the shortage is not just affecting government institutions.

“If I miss my anti-depressant for more than two days I go into withdrawals. The symptoms are anything from extreme dissociation, inability to concentrate, insomnia, flu-like symptoms of body pain and irritability. It becomes impossible for me to function at work or at home. It’s a matter of life and death, and if I missed my dosage for over a week I don’t want to imagine what would happen.”

So that’s the bad news. What’s the good news? Well, firstly, the legislation is moving us forward. South Africa is ahead of other African countries, and Lund et al wrote in 2012, “The Mental Health Care Act No. 17 of 2002 marks a significant step forward in addressing mental health as a major public health issue in South Africa and protecting the human rights of people with mental illness. Based on an extensive local consultation process, the new Act is consistent with international human rights standards.” The legislation also helps with monitoring mental health services, which is a significant improvement, and Mental Health Review Boards have been established.

Secondly, government does recognise that something needs to be done. At the Mental Health Summit, health minister Aaron Motsoaledi called for a “more holistic approach” to solving the country’s healthcare crisis – and there is the recognition in the budget that more money needs to go towards mental healthcare by 2020. He was previously quoted in the Saturday Star expressing similar sentiments.

Government is (hopefully) open to persuasion. A presentation by Lund and Sarah Skeen, outlining recommendations for achieving the Millennium Development Goals, has been presented. Some recommendations have been implemented, some not. There remain challenges. Hopefully these will not prove insurmountable.

But in the meantime, patients continue to struggle. “Because the mortality rate from mental illness is much lower than that of HIV/Aids, mental health is not receiving the attention it deserves,” Akeso Clinics Group CEO told Finweek. “If South Africa wants to alleviate its overall healthcare burden, mental health needs to be on the front burner.”

If this doesn’t happen, the country will carry the cost – in lost income, lost lives, lost productivity. If we want to stop bleeding money and potential, we need to turn the tide, and fast. DM