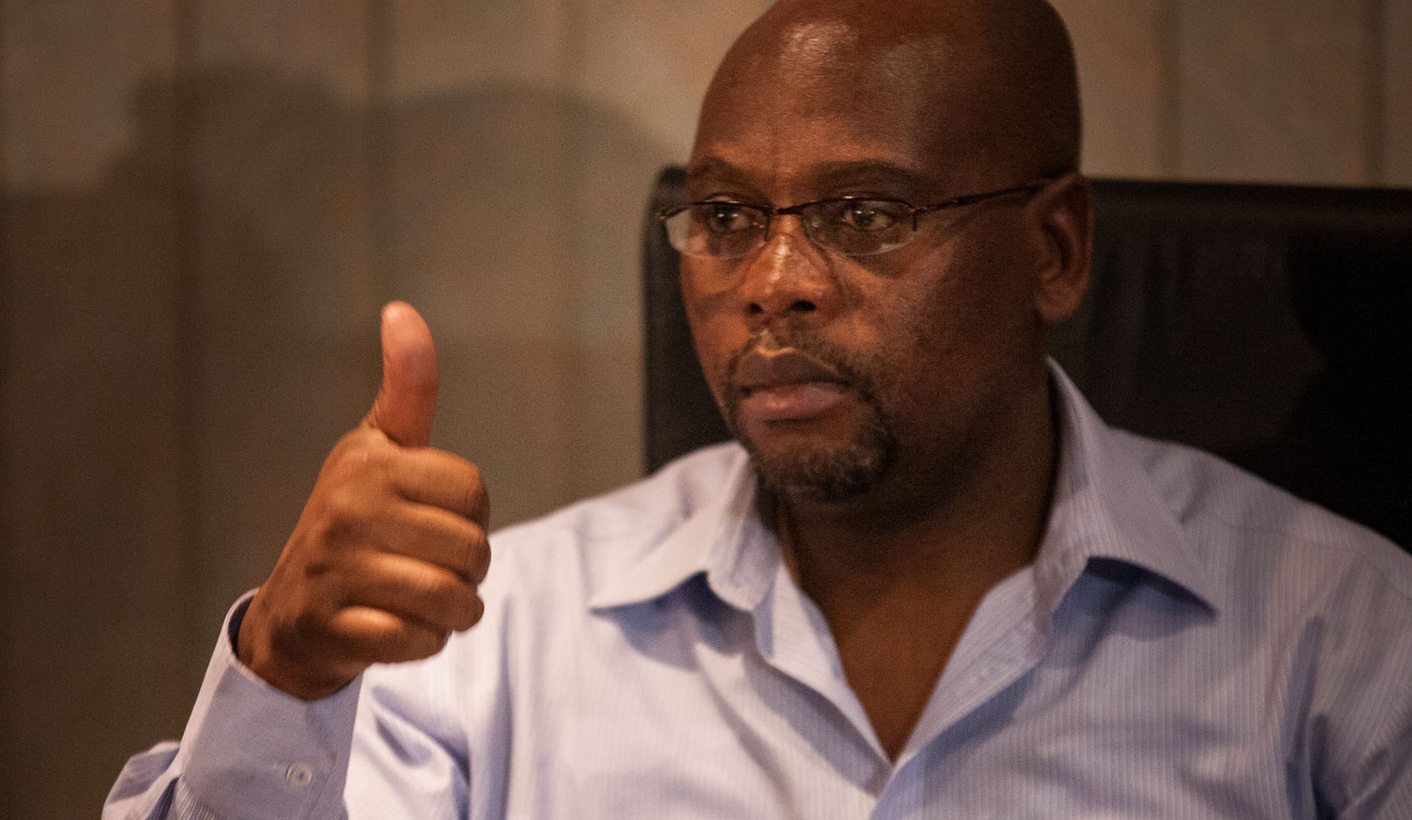 Dissidents in Cosatu backing expelled metalworkers union Numsa and the ousted general secretary Zwelinzima Vavi believed that, had they secured a vote by secret ballot on delegate credentials, the federation’s special national congress might have swung their way. They alleged that delegates would only vote according to their own free will if their votes were secret. But the vote was taken by show of hands on Monday night, revealing that they were greatly outnumbered. On Tuesday, their plan for a rebellion against the leadership petered out. Cosatu president S’dumo Dlamini and his camp asserted their dominance. While that does not mean Cosatu has been cured of its problems, it does mean that Numsa and Vavi are well and truly out. By RANJENI MUNUSAMY.

You have to hand it Cosatu president S’dumo Dlamini. He bounced back spectacularly from a gruelling first day of the Cosatu special national congress to take charge and stabilise the second day’s proceedings. Once it was obvious that the numbers were firmly on his side, he knew there was no way the dissidents could triumph at the congress.

For the entire first day, the Cosatu special congress hung in the balance. Dlamini told the media on Monday night that if the credentials report were not adopted, the congress would collapse. He told the SABC after the congress ended on Tuesday that he cried after the vote because it was a “special moment” for him.

At issue was the participation of new metalworkers union Limusa and Cosatu second deputy president Zingiswa Losi. The rebel unions, which, together with Numsa, had requested the congress, believed that if a vote took place by secret ballot, delegates from other unions, who did not support the expulsion of Vavi and Numsa, would side with them. They fought for hours on the issue, to no avail. Dlamini and the unions supporting him knew that if they allowed the rebels to manoeuvre, they would lose grip on the congress completely.

This is the reason the dispute raged for close to 10 hours on Monday. But as soon as the results were announced, 1,752 in favour of adopting the credentials, 253 against and 226 abstentions, the tide turned. Dlamini’s tears were testament to that.

Some of the rebels then tried to argue to amend the programme so that the Numsa and Vavi expulsions could be discussed. Another vote was threatened, which would obviously yield similar results. The congress adjourned late on Monday night, with Dlamini undertaking to open the congress properly on Tuesday morning, now that the “procedural matters” were out of the way.

Overnight, there were intense consultations and strategizing. Numsa and the unions allied to them realised they could not recover. They drafted a statement in anticipation of a day that would go horribly wrong for them. It did.

When Dlamini addressed the congress on Tuesday morning, it was a different man to the one that had been brought to tears the night before. He was emboldened and determined to quash any form of rebellion or hope that Numsa still harboured to make a comeback.

He called on affiliates to free themselves from enslavement by a union that was outside of Cosatu. He said unions could not be affiliates of other unions, and urged the rebels to resume attending Cosatu central executive committee (CEC) meetings.

“Free yourself comrades, attend the CEC of Cosatu and argue your stance. When we vote, do not abstain from that process,” Dlamini said. “There is nothing like ‘Numsa allies’. There are Cosatu unions. Set yourself free from that!”

But Dlamini powered on. “Numsa is attacking us. They are planning to destroy this Cosatu,” he said. “I read the document they authored recently. They planned against the Cosatu congress and resolved in that document to break Cosatu.”

Dlamini also cautioned delegates against their general secretaries whom he said could lead them astray. This appeared to be directed at the new NUM general secretary David Sipunzi who supports Numsa and Vavi’s expulsion being reversed.

He also warned about financial inducements to Cosatu members to bring about “regime change”. “Be very careful about organisations from America who are offering funding. There is no free lunch. If somebody gives you money‚ they want something back from you‚” Dlamini said. The warning is not incidental, considering that Vavi and Numsa general secretary Irvin Jim returned at the weekend from a lobbying trip to the US. This is likely to fuel the conspiracy theory about their agenda.

After messages of support from the ANC and South African Communist Party, Dlamini chaired the session where an open discussion was held on unity and cohesion in Cosatu. While the media was barred from Monday’s debate, the entire day’s proceedings on Tuesday were open. Dlamini allowed speakers from all the unions time to express themselves on the battles plaguing Cosatu. He indulged the rebels in particular, even protecting the speakers when there were howls of protests from other unions.

This was the opportunity for the dissidents to argue their points. They wanted the congress to tackle the Cosatu leadership for failing to implement the resolutions adopted in 2012. But they seemed unable to articulate their position strongly and coherently. They instead complained about the fact that they had to resort to court action to secure a date for the congress, that they had been accused of wasting workers’ money by going the legal route and that they were being victimised for boycotting CEC meetings. They also complained about Monday’s voting process.

But that was all water under the bridge. They could not give the congress an alternate message to that which Dlamini had delivered – stop being under Numsa’s spell, come back into the Cosatu fold and rebuild unity in the federation. The arguments they made in defence of Numsa was that it was not the only union that had extended its scope to other sectors and therefore the union should not have been expelled.

On the other hand, unions in the dominant faction were delivering killer punches that were difficult to respond to. A delegate from transport union Satawu, Kate Matlou, lashed out at Vavi for having sex in the office with a Cosatu staff member.

“You cannot have sex in the office and say to us you ask for forgiveness. That man was refusing to be corrected and follow disciplinary procedure”, she said. “I don’t understand why he could not get a low cost hotel instead of having sex in the office.”

“Arise women of Cosatu, arise!” Motlou shouted. “Hold hands together and do not allow yourself to be used by comrades holding higher office.”

Some delegates also spoke out against a discussion document produced by Numsa and its allies. They said this document was aimed at created “anarchy” at the congress. A Fawu delegate denied that they had distributed the document at the congress.

Delegates were also aware that the dissidents had prepared a statement overnight condemning the outcome of the special congress.

“We have attempted to participate in the debates from the beginning to the end of this congress. We have raised our points, not in order to disrupt the congress, but to make a contribution to its success based on the theme – rebuilding unity and cohesion of the federation. We have refused to be personal even in the face of sheer provocation including unfounded allegations that we were to provide drugs and alcohol to delegates,” the statement read.

“We regret that all these efforts to hold a successful congress have not succeeded. The unity of Cosatu has not been achieved. Cosatu is now even more divided than before this special national congress was convened and remains paralysed.”

The question now is whether the rebel unions will resume full participation in Cosatu meetings or continue to fight alongside Numsa for a yet undetermined outcome. The unions says they will convene national executive meetings to discuss their way forward.

In the meantime, Numsa and Vavi say they will convene a workers’ summit to discuss the future of the labour movement. Both Numsa and Vavi have the option of waiting until the ordinary congress of Cosatu in November to appeal their expulsions.

But it was clear on Tuesday that they had come to the end of the road in Cosatu. The majority of unions do not want them back, despite their hitherto conviction that ordinary workers did not support the CEC decision to expel them. They need to chart their own path now.

Dlamini and his leadership team are securely back in the saddle but that does not mean they are presiding over a united federation. While they did manage to suppress any rebellion at the congress over Numsa and Vavi, the divisions are deeply entrenched and most unions are battling internal turmoil.

In four months, they get to run this show all over again at Cosatu’s elective congress. That will be the real fight for positions and survival, as well as control of a 30-year-old, once formidable voice of South Africa’s workers. DM