Ufa Declaration: The house that Brics are building 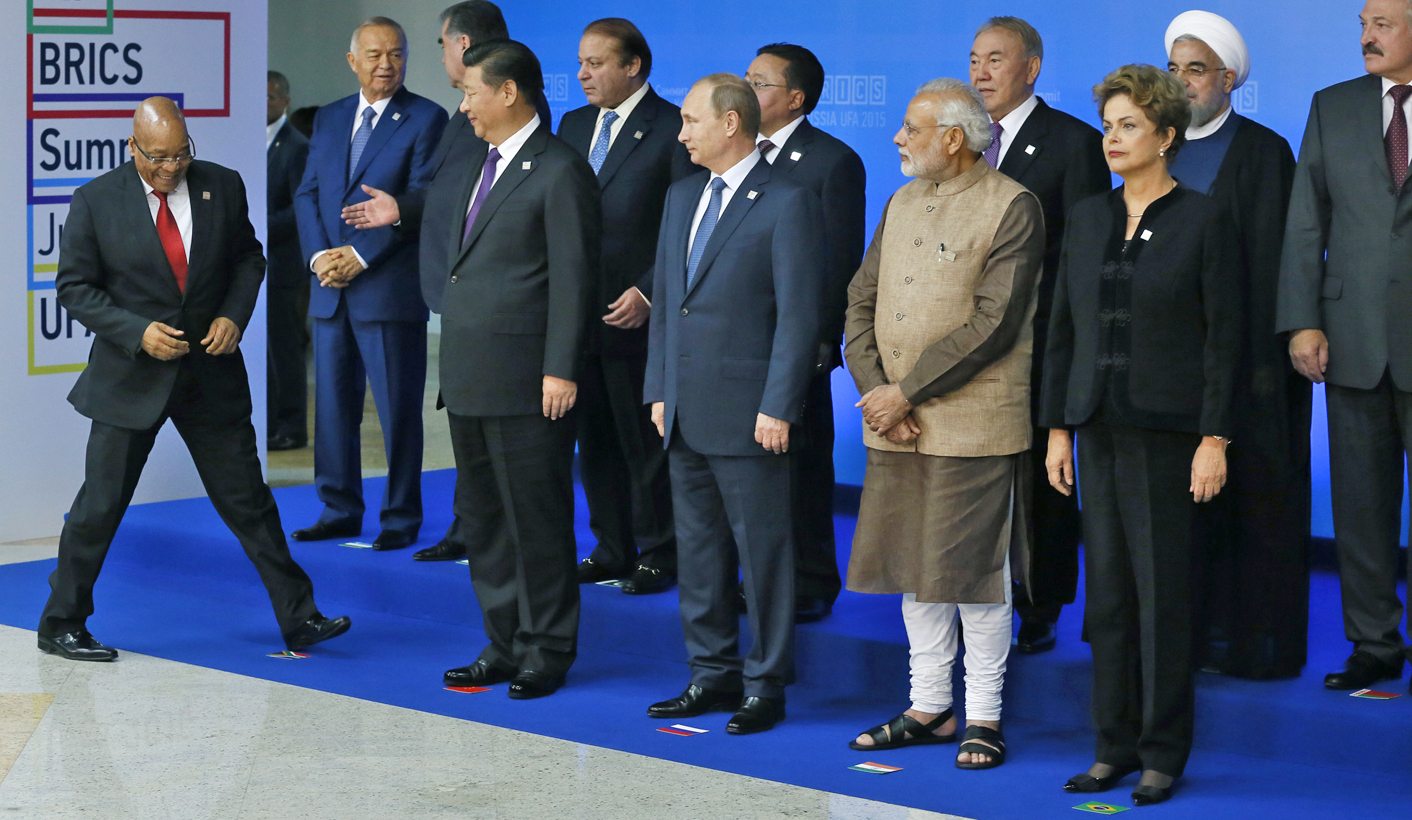 Mr President went to Russia, but what did he talk about there other than nuclear deals? At the seventh Brics summit in Ufa, Russia, last week, the partners discussed issues including the new Brics bank, efforts to reform the United Nations, and what the other Brics nations think about South Africa’s revamped visa regulations. REBECCA DAVIS got a debriefing from the South African Brics Think Tank.

The turmoil within the European Union at the moment shows just how messy multilateral politico-economic partnerships can turn out to be. But within Brics (Brazil, Russia, India, China and South Africa), things are very different, according to the South African Brics Think Tank’s Professor Ari Sitas.

“This is an historic moment because unlike many other multilateral bodies in the world, Brics is moving ahead and trying to create a new architecture for interactions globally and locally,” Sitas told a media briefing in Cape Town on Monday.

His comments came on the back of the seventh Brics annual summit, held this year in Ufa, Russia.

By far the most significant outcome of the summit was the formal launch of the Brics New Development Bank (NDB), to be based in Beijing with a regional outpost in South Africa. The NDB is being hailed as evidence Brics will make tangible changes to the global order rather than merely serving as a symbolic co-operation club.

The NDB aims to become an alternative global financing pool to the Bretton Woods institutions, such as the International Monetary Fund and World Bank. It will provide a reserve currency pool for countries in need. The NDB is also expected to start funding infrastructure projects in the member nations as early as next year.

Ever wondered who advises Brics leadership on policy? Each member nation has a think tank, normally affiliated with higher education in some way. South Africa has its own Brics Think Tank (SABTT), which until the end of June fell under the ambit of the Human Sciences Research Council (HSRC), but from now on is the responsibility of the National Institute of Humanities and Social Science (NIHSS).

Our local version teams up with the think tanks in the other countries to form the Brics Think Tank Council. This body works with the Brics Academic Forum and the Brics Business Council to form long-term strategy.

This strategy, the SABTT’s Olive Shisana stressed at Monday’s media briefing, does not only consider the economic co-operation of the member nations. Brics, she suggested, should also be seen as having a potentially powerful impact on factors such as social justice, sustainable development and quality of life.

Shisana said that at Ufa, Brics nations affirmed the importance of the United Nations as a body for global peacekeeping, but also agreed that the UN was in need of “comprehensive reform”.

In particular, the UN’s Security Council is felt to be insufficiently representative. Of the Brics members, only two – China and Russia – are permanent members, which gives them access to the all-important and controversial veto power.

The SABTT’s Narnia Bohler-Muller, responding to questioning, said that a more democratic UN Security Council would likely involve the abolition of the veto system. Despite the fact that Russia and China state support for a more representative state of affairs, Bohler-Muller suggested it was unlikely that the two powerhouses would want to let go of their veto powers.

Bohler-Muller said that Brics’ “ongoing conversation” about the representivity of the UN also had to be balanced with other discussions. Another body of which South Africa is a member, the African Union, has also made a request for two permanent seats on the Security Council.

When it comes to economic governance, Brics also wants global bodies to “better represent the concerns of developing nations”. The declaration signed at the end of the summit in Ufa calls on bodies like the G20 to enforce principles of “transparency” and “inclusiveness”.

Shisana said that the countries had vowed to work together to share best practices on targeting cyber-crime and using technology to protect national interests. At least one of the member states may know its way around this subject: the US has accused China of being the global leader in cyber crime against US business.

Brics wants to use the Millennium Development Goals (remember those?) as the basis for post-2015 work on social justice and poverty eradication. Shisana noted the importance of taking into account the very different social circumstances faced by each member country, however.

It is a point that is frequently made. The Financial Times was quick to note the lack of uniformity of the Brics group in its reporting on the summit. “They could hardly be more different in their values. Brazil, India and South Africa are chaotic democracies that emphasise the rule of law while China and Russia are authoritarian.”

Different or not, one thing that may prove critical in ensuring member co-operation is the ease of travel from one state to the next. At the summit, President Jacob Zuma reiterated the launch of a 10-year multiple entry visa regime for Brics business travellers by the home affairs department.

But the problem is that Brics doesn’t just want to see business travellers able to move around with ease. They also want “cultural exchanges” and “people-to-people contact”, Bohler-Muller said: tourists, students, etc.

“The visa issue is a very sensitive one,” Bohler-Muller said, suggesting that a “little bit of a backlash” was already evident in the way that other Brics countries are starting to handle South African applications. “A serious conversation needs to be had around the visa regime,” she suggested.

Sitas concluded by urging greater public engagement with the notion of Brics, now that the body is progressing out of the realm of the purely theoretical.

“It is the most critical time now because we are moving from ideas… to creating actual institutions,” Sitas said. “The press, everybody, should help us look at it critically and help us create a better world.” DM