Cosatu showdown: Numsa fights back as Dlamini seeks to lock down special congress 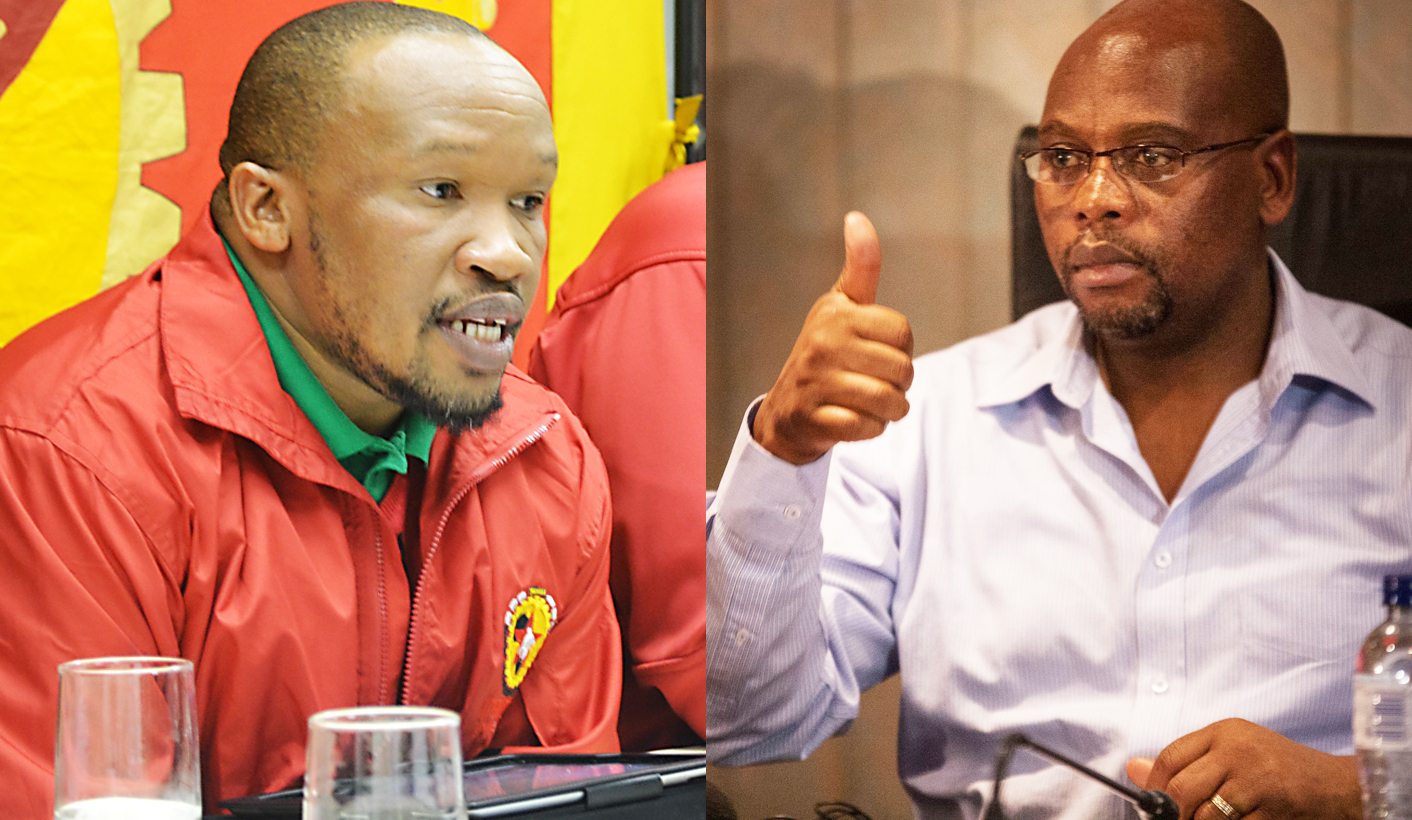 Metalworkers union Numsa is very upset. Together with eight other unions, they fought for two years to get Cosatu to convene a special national congress to discuss the federation’s problems, only to be barred from it now. That does not mean Numsa will sit quietly and watch Cosatu president S’dumo Dlamini and his allies manage the outcome. Numsa might not physically be present in the congress hall, but the union, together with expelled Cosatu general secretary Zwelinzima Vavi, will loom large over proceedings. This will be a test too of Dlamini’s strength and control of Cosatu. By RANJENI MUNUSAMY.

One of the biggest issues in the run-up to the Cosatu special national congress has been how many unions are actually still siding with Numsa. In the draft discussion document that will form the basis of discussion, Cosatu says seven of the eight unions that called for the congress – the Cosatu leadership no longer recognises and counts Numsa – took a decision to boycott central executive committee meetings (CEC). But now it notes that only four unions are still not participating.

This, Cosatu interprets, as Numsa and Zwelinzima Vavi losing support of the other unions and now having to rely on just four unions to wage their battle at the congress.

“In the course of writing this document we have received reports attributed to the unions who are still boycotting the CEC, working together with the expelled union and a dismissed former leader of Cosatu that they were having a plan to undermine the special national congress by using the Saccawu, Safpu, Sasawu and Fawu delegates… to force through a demand of adding other agenda items which were not part of the request for the special national congress,” Cosatu says in the document.

Not so, says Numsa. At a media briefing on Sunday to respond to the volley of attacks against them from Cosatu and South African Communist Party (SACP) leaders, Numsa deputy general secretary Karl Cloete said they would not continue to talk about nine unions if there alliance had fallen apart. He said while there were divisions in the different unions, the group that had called for special congress was still working together. He said the nine unions were still “on the same page” although some had decided to return to CEC meetings according to their members’ mandates to fight Cosatu’s battles from within.

This is at the crux of what is likely to go own over the next two days – how much support will there be at the congress to adjust the agenda to discuss Numsa and Vavi’s expulsion and whether the Cosatu leadership will be able to keep the lid on a rebellion.

The thing is, nobody knows for sure.

Cosatu president S’dumo Dlamini is obviously nervous about this, which is why he has bought into a conspiracy theory that Numsa has orchestrated a R250,000 plan to disrupt the special congress. “Our conclusion is that they will buy a lot of alcohol and even drugs and feed them to workers so they can cause disruptions at the congress,” Dlamini said last week at the SACP special congress.

Numsa says these are “bogus and baseless allegations”. “We view these allegations as part of a moronic ploy to send false alarm bells and to influence delegates to rubber-stamp the reactionary decision to expel more than 365,000 workers from the federation they helped found and develop, and to confirm the expulsion of properly and popularly elected general secretary, Zwelinzima Vavi. Furthermore, it’s intended to insulate the current leadership faction in Cosatu from its failures,” Cloete said.

He said delegates attending the congress should feel insulted and disrespected by the Cosatu president’s claim that their loyalty could be bought with alcohol and drugs.

Numsa also criticised the agenda of the special congress, saying most of Monday’s programme would be taken up by speeches by the alliance leaders. The presentation of the Cosatu discussion document will take up the rest of the day. On the second day, the congress will break up into commissions for which no topics have been assigned. The plenary will reconvene on Tuesday afternoon for report backs from commissions, the congress declaration and closing remarks. Cloete says the congress would be “farcical” if it stuck to this agenda as it did not allow for much discussion among the delegates about Cosatu’s problems.

Cloete says they were confident that “voices will be loudly raised” in support of the call to return both Numsa and Vavi back into Cosatu. However he said they were worried about the “militarisation” of Cosatu and feared that delegates not willing to toe the line might be muscled out of the congress in the same way Economic Freedom Fighters (EFF) MPs were thrown out of Parliament.

Dlamini said last week that tight security measures would be in place and Cosatu was prepared to deal with unruly elements.

Numsa was particularly angered by “slanderous, malicious and offensive statements” directed against its leaders and Vavi by the SACP last week. Cloete shot back a thundering assault, saying the SACP was “nothing more than an insult trading machine” and its “ideological and political orientation under its current leadership is bankrupt”.

“The SACP under Blade Nzimande and Jeremy Cronin (both serving in the South African capitalist state as minister and deputy minister respectively) have succeeded in fomenting divisions in Cosatu in order to tame Cosatu into a lapdog and conveyor-belt of right wing and reactionary policies advanced by the fading ANC/SACP government.

“The SACP is responsible for the ‘rupture’ in Cosatu that happened immediately after its watershed 11th National Congress held in 2012. The SACP’s intention, under Blade Nzimande, is abundantly clear: it seeks to liquidate all working class formations, and co-opt all critical voices to be part of reciting the ideological fog of a ‘good story to tell’ in order for its leadership to continue benefit from the political patronage dispensed by the ANC, including lame attempts at making the fading ANC look good in the eyes of workers and the poor,” Cloete said.

He said they were also concerned by Nzimande’s call for the EFF to be killed off saying this was “authoritarian” behaviour inconsistent with a multiparty democracy.

Numsa would not divulge their plans on whether they would try to attend the Cosatu special congress forcibly or picket outside. They were meeting with allied unions till late last night to decide their action plan. Cloete said a booklet by the “nine plus unions” on “the crisis in Cosatu and revolutionary tasks of the working class” would be distributed amongst delegates.

The booklet sets out the history of the battles and how Numsa and Vavi came to be expelled. It says their arguments should be made known to the delegates attending the special congress to encourage them to “break the paralysis” in Cosatu. “Now is the time to grasp the opportunity, in whatever union you are, to side with those who are engaged in building a movement that the working class deserves,” the booklet says.

Whether this will be enough to influence the majority of delegates about the Cosatu battle remains to be seen. Cloete said the special congress was the “last point at which we attempt to reclaim Cosatu”. He said there was potential for unruly conduct at the congress if Cosatu’s leaders acted in a factional manner in presiding over the meeting.

Both factions are well aware of how high the stakes are and that the outcome of the congress would have major repercussions for the trade union movement and political alignment of workers. And this is why neither side will surrender easily.

Last night, Vavi took to Twitter to again lament the exclusion of the voices of hundreds of thousands of workers from the congress because of Numsa’s expulsion from Cosatu. He and Numsa general secretary Irvin Jim had returned from the United States on Sunday morning where they were canvassing support for a new worker movement.

“To delegates who think they can reclaim Cosatu please remember nothing more worth than your life or limbs – avoid violence it’s not worth it,” Vavi wrote on Twitter.

And this is what it has come down to – a political fight for survival now in the hands of ordinary workers. They must decide whether, in the 30th year of Cosatu’s life, they consent to the exclusion of 340,000 workers from the federation or they rebel against their leaders.

Either way, these will be a defining two days. DM