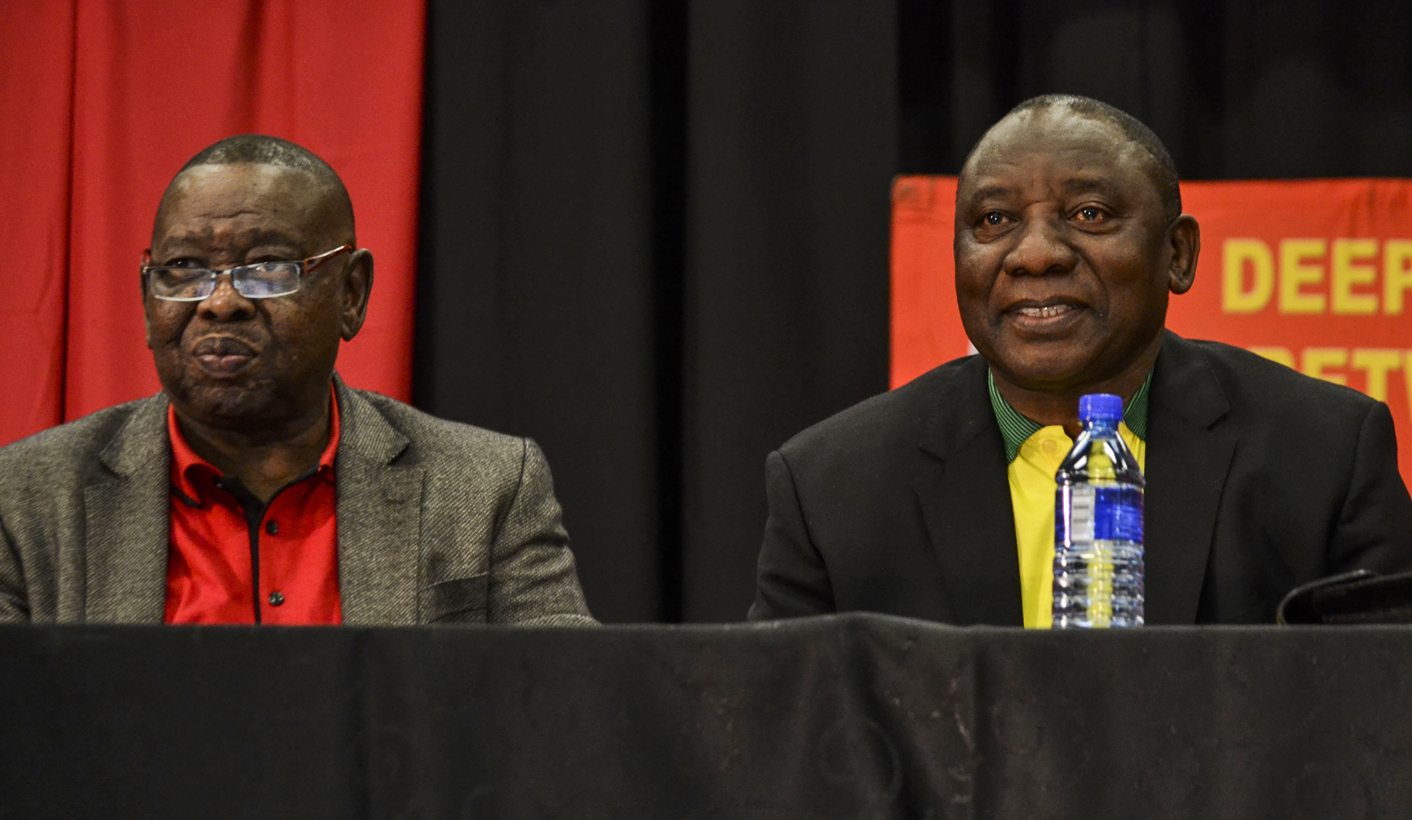 The Third South African Communist Party Special Congress had been until Thursday a rather dry affair, dealing in the main with communistic stuff, which these days mostly involves using 'hegemon' in a noun, an adjective and a verb. But then Deputy President Cyril Ramaphosa showed up, and things turned decidedly spicy. He touched on every conceivable topic germane to the current iteration of the African National Congress, minus the small matter of the president’s palace, and the much larger matter of Marikana. And like everyone else, he used ex-COSATU Sec Gen Zwelinzima Vavi as a conceptual piñata. Welcome to the possible future of your country, which is in all ways exactly the same as the present. By RICHARD POPLAK.

Oh, I know—the more successful of the communists at this, the 3rd SACP Special Congress in Imbizo Hall, University of Johannesburg’s Soweto campus, have the right to spend their collectivized winnings on anything they want. The workingman and woman cannot be sustained by churning out Toyota Yarises alone. But still, when I show up at one of these shindigs, I can’t help feeling like I badly misread Das Kapital, insofar as I accurately read it at all. I remind myself that all isms are mutable, and we must be grownups about these things. Here’s one way of looking at it: the market demanded more purchasers for high-end luxury vehicles, and the upper ranks of the SACP stepped in to fill the abhorred vacuum. Which is why this 3rd SACP Special Congress remains a necessary corrective.

Anyway, the congress taking place over the course of the past several days, with cadres from across the country gathering to discuss the matters of the day, has been until now a rather sedate affair. Secretary General Blade Nzimande remains a loyal, perhaps even slavish alliance partner to his masters in the ANC, and he’s been rewarded with a long-standing cabinet post for his troubles. As far as Nzimande is concerned—and remember that he’s a Zuma man down to the rims of his second Mercedes Benz—all is swell within the alliance. Nzimande asserts that the National Democratic Revolution is ticking over nicely, and a fairer, socialist South Africa is only a political heartbeat away—which translates in real terms to about seventeen millennia, give or take an eon or two.

Nzimande’s capacity for dissembling is so legendary, and the intellectual corruption of his party so absolute, that his chutzpah has basically become room tone. Still, where on earth would the secretary general of a communist party invite arch-capitalist Cyril Ramaphosa to a special congress that didn’t end in a firing squad? Pretty much everywhere communists still exist is the answer, mostly because there’s nothing left of communism outside of North Korea, Bernie Saunders’ Democratic primary campaign, and hyper-capitalist African liberation movements. Even by these standards, there was something gruesome about watching Ramaphosa rise up to the lectern, and speak before the party that had once belonged to some seriously committed comrades, many of whom were invoked by this new, vampiric order.

The amuse bouche that preceded Ramaphosa’s all-you-can-eat buffet was provided by Congress of South African Trade Unions (COSATU) President Sidumo Dlamini, who in ponderous tones denounced the self-aggrandizing activities of “pop-stars” like “the one called Zwelinzima Vavi.” To rounds of pre-packaged applause, Dlamini wanted his alliance comrades to understand that they needed each other, that it was all about putting the collective’s interests before those of the individuals’, and that the central conflict in his own upcoming congress concerned “differentiating between lies and truth.” He urged the delegates to move on, and asked them “not to attempt to analyze [COSATU] under the template ‘Vavi’”.

Zwelinzima Vavi is, of course, the recently expelled ex-Secretary General of COSATU, a man kicked to the curb for his opposition to Zuma Inc., and a massively popular if desperately confounding labour leader who may or may not be starting a political thing called the United Front. Vavi’s current gig is being the face behind a looming Anti-Corruption march to be held on 19 August, an event that likely won’t be a celebration of the alliance’s achievements to date. Anti-corruption, much like kitten murder and unironically wearing beige, is something that we can all in good conscience stand against, and Dlamini was taking no chances: Vavi was introduced as enemy number one, with no disrespect to the perennial villain—White Monopoly Capital.

Speaking of which, White Monopoly Capital’s favourite rent boy, Deputy President Cyril Ramaphosa, shortly followed Comrade Dlamini to the lectern. To say that the buzz in Imbizo Hall was electric would be a lie—Ramaphosa jawing at a communists summit is like Iggy Azalea doing the keynote at a black rapper conference. “Comrade Cyril needs no introduction,” insisted an undaunted Nzimande, by way of introduction, but Comrade Cyril needs hours of introduction, days of introduction, reams and reams of exposition before he makes any sense at all. “When we talk about the founding fathers and mothers of our founding constitution, Cyril will be found there,” continued Nzimande.

Which is precisely why Cyril Ramaphosa represents such a tragedy.

“I feel at home here, Comrades,” he said, once he’d unfolded his notes, and unbuttoned his black blazer, revealing a mint-condition ANC golf shirt. He was in avuncular mode, as relentlessly charming as he’s ever been, if looking older by degrees than he did before assuming the deputy presidency. “The relationship between the SACP and the ANC is not transactional,” he began, “but a strategic alliance to advance the National Democratic Revolution.” (The NDR is a lukewarm conception that was cooked up in the old days, one that hoped to send communistic vibes into every arm of the state. Hardcore white UFO watchers and conspiracy theorists think it’s a thing; everyone else accepts that it’s spin.) “The ANC’s strength today is thanks to the existence of the ANC.”

But Ramaphosa had not come just to flatter his hosts. He knows the history as well as anyone, and he wasn’t interested in delivering it accurately. Instead, he wanted to gun for some mutual bugbears, and he got down to it forthwith.

“There are those who have made it a fetish—a career, almost—to criticize the nature of the alliance”—AKA Vavi—“and we have never had the secretary general of the SACP lambaste the ANC on a public platform. What we’ve had is robust engagement. This is the SACP that the ANC truly appreciates.”

Ramaphosa then explained that he was a jazz fan, and that he and the rest of the ANC expected the SACP to lead as Miles Davis once led his bands. “There is a lot we expect from the party, an intellectual robustness that has always contributed to the ANC.” He mentioned Radical Economic Transformation, another favourite buzz-term around these parts, and said that with the help of the communists, its implementation was an inevitability.

But then came the crux, or one of them, from the man who brought us our Constitution:

“Yesterday, we saw the body of judges of this country called a meeting with the president, and we welcome this meeting. Yes, at this meeting we will be able to discuss with the judges what the people on the ground perceive as a negative. Because we represent the people. I will say to Chief Justice Mogoeng Mogoeng, We welcome your call, we can discuss your role going forward.”

He assured those present that the judges independence would be respected. But how did he and his co-conspirators hope to respect that independence while the judiciary’s ‘role’ was being renegotiated?

“There is no constitutional crisis,” insisted Ramaphosa, whose short tenure in government has seen the ruling party subvert the constitutional court only a few times, most recently in ignoring the order to refuse Sudanese President Omar Al-Bashir the right to leave the country, following an African Union summit. The battle with the judiciary, he was telegraphing, is now on. And his government was taking it seriously.

He said some stuff about e-tolls, he promised that a national living minimum wage was in the offing—maybe, someday. He quoted Joe Slovo, he quoted Madiba. “There is a poverty of ideas, and occasionally we allow every Tom, Dick and Thabo to sat what they like,” he joked. “We can’t sink to their level, because that would be to step into a pigsty.”

Indeed, this was a clean speech. Ramaphosa deftly avoided any muck whatsoever. In deriding the “factionalism, deviant behaviour and corruption” that occasionally pops up in the ANC, he did not mention Nkandla. And in tub-thumping the importance of the working class, he made no mention of the Marikana miners—not a single reference to the men who died in part because this one-time mine union leader framed striking as criminal behaviour in an infamous email. “The people’s cause must triumph, shall triumph,” said Ramaphosa, smile fixed to his face, “whether they like it or not.”

And who is they this week? The judiciary? Zwelinzima Vavi and his Anti-Corruption groupies? The people themselves?

“Why be a man when you can be a success?” Berthold Brecht once asked. He might as well have asked that question about Ramaphosa.

He wrapped up his talk with a quote from the final passages of the Freedom Charter, the last of the milestones on the local pinko’s scenic route. “These freedoms we will fight for, side by side, throughout our lives, until we have won our liberty.” Rousing words, but the least substantial part of the Charter—words that could be culled from just about anywhere. And did those in the audience, the rank and file bussed in from Lord-knows-where, Eastern Cape, could have been forgiven if they wondered: isn’t it Cyril Ramaphosa from whom we must win our liberty this time ‘round?

He’s a complicated man, Ramaphosa, in a complicated world—a jazz fan who, when all is said and done, leaves everyone feeling kind of blue. DM