Asserting his authority and his independence, Advocate Abrahams meets the press 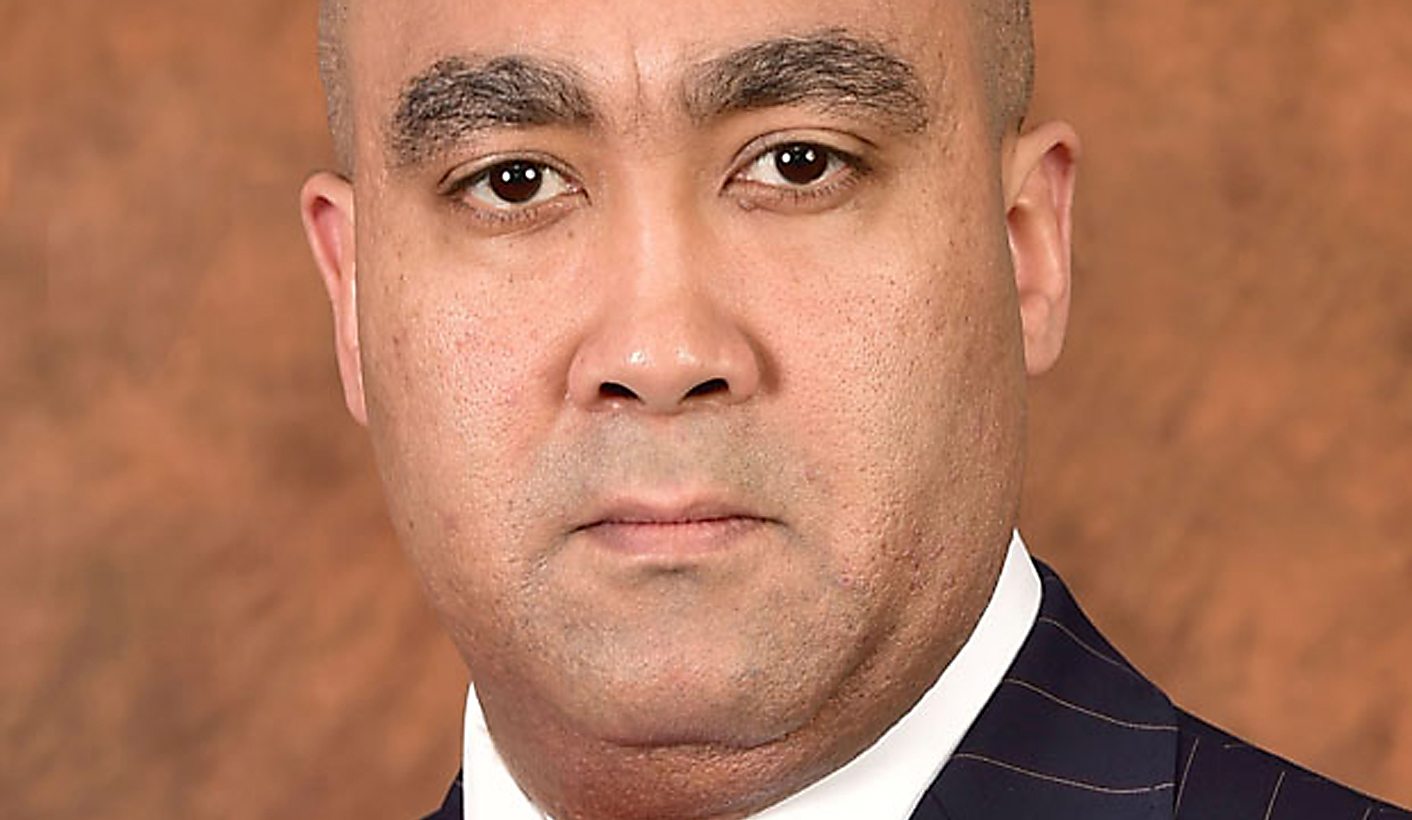 Over the last two years or so the position of the National Prosecuting Authority, and of the National Director of Public Prosecutions, has been much talked about. On Tuesday, the new NDPP himself, Shaun Abrahams, did the talking. It was, officially, an opportunity for the justice minister, Michael Masutha, to ‘introduce him’ to NPA staff. But once Abrahams himself had the podium, he did what he needed to do. He asserted his authority. And he asserted his independence. Considering so much that has come out of the NPA of late has been so unimpressive, it is a refreshing change. By STEPHEN GROOTES.

Many lawyers I know in difficult positions like to beat around the bush. They try to avoid the big issues in the room. It’s a critique one can make of many politicians who hold positions of power as well. Often, a sort of code has to be spoken if one wants to get anything sensible on anything important out of them. Arriving at the sprawling National Prosecuting Authority (NPA) campus in Pretoria (which, according to legend, once housed that bastion of independence, the SABC), one could be forgiven for having low expectations. Yes, we’d been told he’d take questions, but really? With the minister there and everything?

Those expectations were greatly improved almost immediately after the ceremony started. It was Advocate Lungisile Mahlati who opened proceedings, and immediately spotted a few elephants. “I remember expressing my support for Mxolisi Nxasana” he suggested, and immediately said that he hoped “my touch” didn’t have the same affect.

Minister Masutha himself said that he had prepared presentations on suitable candidates. (No doubt someone somewhere has taken notes after the Menzi Simelane judgment, where the then justice minister Jeff Radebe simply suggested Simelane, based on just his CV). But, President Jacob Zuma then said that he wanted someone from within the NPA, a career prosecutor. And, said Masutha, “The President has bequeathed to us a true leader”.

So far, so party line.

Then the man himself, Shaun Abrahams, the person with the power to prosecute Zuma (or not), to continue the prosecution of Advocate Nomgcobo Jiba (or not), to entrench stability within the NPA (or not) took to the stage.

Firstly, he’s a young man. Not young in the usual sense, but in the legal sense of the word, just months shy of 40. This means that he grew up in the media age, not in the way that so many people a generation older than him did. It also means that while the Struggle, and economic Apartheid must surely have defined his life, he has spent his adult life in a free South Africa. He is also energetic.

It’s important here to recognise the context of this event. He was speaking on live TV, but also on a live webcast, to NPA staff. The auditorium itself was full of his new staff, people he knows, and now leads. Outside was a screen for those who couldn’t get in. He needed to stamp his authority on the organisation, to point the way forward for an institution that has, in public, appeared to be riven with division.

So he spoke about the importance of independent prosecutors, the concept of prosecutors as the “people’s lawyers” and then said, “Unfortunately, there are unpleasant issues that we as an institution, have to deal with”. He went on to say that there “are no camps in the NPA, only the NPA camp”. Abrahams also said that it is “concerning to see how information is leaked to the media, wittingly or unwittingly. NPA officials can only do it. In most instances, very senior ones. This cannot be condoned”. He followed it with a reference to the part of the law that makes it illegal to reveal this kind of information, and, just for good measure, reminded everyone that someone could be both fined and jailed for doing this.

Shaun Abrahams is the boss. Geddit?

Abrahams is also aware of the unfortunate fate that has befallen all of his predecessors. Bulelani Ngucka resigned (after being accused of being an Apartheid spy); Vusi Pikoli was suspended, and eventually fired; Menzi Simelane’s appointment was struck down by the Constitutional Court; and Mxolisi Nxasana settled and resigned, after an inquiry into his fitness for office was instituted.

Abrahams says he has only one legacy he wants to leave, that he’s created “stability for the NPA, entrenched stability”. It’s a pretty difficult aim to disagree with. If there is one thing that everyone in that auditorium would have agreed on, it’s that the NPA, and everyone connected with it, needs long-term stability.

And certainly, you could almost feel the goodwill emanating towards him from the audience. Staff at the NPA must be desperate for him to succeed. They are all intelligent people of the world; they are prosecutors, who see the worst that the world has to offer. To see their organisation dragged through the mud must have been felt very personally.

Abrahams also took the time, in his prepared speech, to announce that he will be engaging with media fairly often, every six to eight weeks, or so. If he’s able to do it, and he seems to mean it, the entire image of the NPA could well change pretty quickly. One of the big problems on reporting on it has been a simple lack of information.

Another problem has been that some of the people involved, including Jiba and commercial crimes head Advocate Lawrence Mrwebi, have not spoken in public themselves to put their stories across. When their view has emerged, it’s been in legal documents, which in the media space are not always that effective. This is a strategy that’s worked pretty well for Eskom, and could well work for the NPA.

And nothing gets you on the good side of politicians more quickly than the promise of actually taking their questions on a regular basis.

And then on to questions. There were very few for Masutha, and plenty for Abrahams.

I asked, bluntly, that considering the context around his appointment, and despite the fact it was not through any act of his own, there was a perception about whether he would protect President Jacob Zuma. There was a slight gasp from some people in the room. But, this was obviously the question to be asked. It was probably why the event was open to journalists in the first place. The interference of presidents within the NPA (don’t forget, it was Ngucka who was plotting the prosecution of Zuma, who had been appointed by Thabo Mbeki) has been a hallmark of its history. But this time is different, as the Democratic Alliance is finally about to go to court in its bid to reinstate the corruption charges against Zuma.

This, Abrahams was clearly ready for. He walked up to the podium, and said categorically, “I can assure you that I don’t intend to use my power to protect anyone.” He looked down at the podium to me, and said softly, “does that answer your question”, and then loudly “I have not been appointed to protect anyone”.

It is hard to think of a more definite answer than that.

My other question, about whether he would continue with the prosecution Jiba, was harder to ask. She was sitting next to him. She, quite rightly and understandably, looked well unamused. Abrahams waved the question away, his spokesperson having pointed out earlier that questions involving ongoing court processes could not be asked.

While there will be some who will insist that he should have answered it, that is probably being unfair. He did the right and proper thing here. He needs time to get a feel for what is best for the organisation. And perhaps he wants to find another solution out of the mess that the NPA could be in here. No one at this stage wants an organisation in open warfare with itself; he does have to finesse some of the dynamics involved.

It won’t be an easy job by any means.

All in all, I came away, well, pretty impressed. I can’t think of anything else that Abrahams could have said or done in his first public appearance as the NDPP that would have inspired more confidence than he did. Just the willingness to engage is refreshing. And he said all the right things, was willing to talk about them, and, just as important in our media age, he said them in a way that will play well in the media space. He is also in the honeymoon phase of his term, at a time when many people desperately want him to succeed.

Of course, we’ve been following the NPA for far too long to accept that words are all that it needs. His acts, his decisions, will speak far louder. And pretty soon he’ll have to decide whether the case against Jiba will continue. And then we may be better placed to decide whether we can, at long last, have hope for the future of the institution. DM

Stephen Grootes is the host of The Midday Report and an EWN reporter. Follow him at @stephengrootes.