Ryder on the storm: MTN-Qhubeka will be the first African Team to race the Tour de France 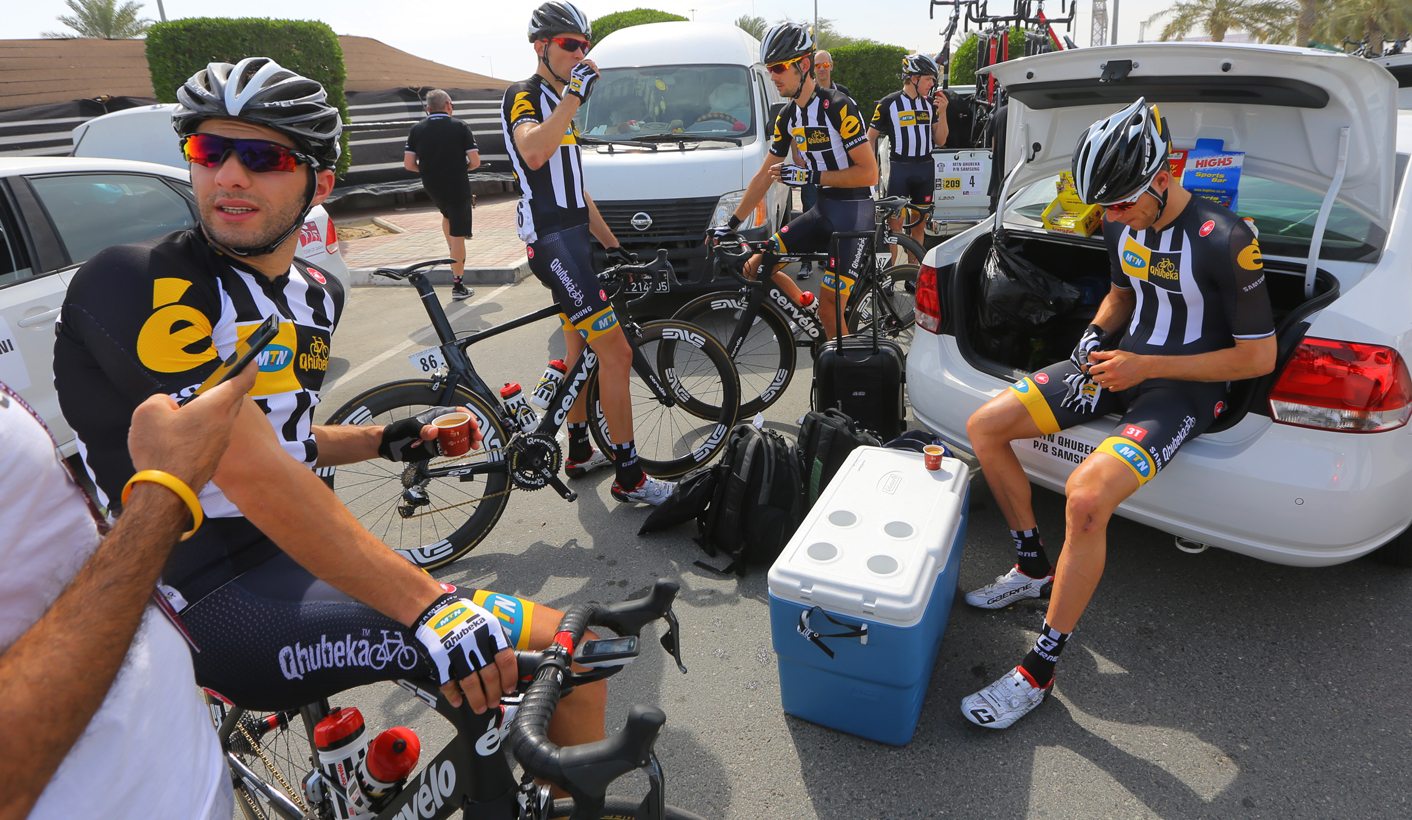 Clear your calendar, say farewell to your family: the Tour de France is upon us. This year, Africans have a horse in the race – Team MTN-Qhubeka is the first officially African outfit to field a team in the sport’s grandest race. It is a monumental moment for cycling, and a proud month for African sport – it may signal the end of European and American dominance on the bicycle, and the start of the African era. By RICHARD POPLAK.

Sports writers are a funny bunch. Funnier still are non-sports writers who occasionally write sports stories. (I’m writing these words while hanging my head in shame.) There’s a tendency to craft Grand Elemental Narratives about the Essential Nature of Life out of the raw material of a football game or a boxing match – events that can’t really sustain all the philosophical huffing and puffing. African cycling encountered this problem in the form of a Philip Gourevitch New Yorker essay entitled ‘Climbers’. It’s a Rocky-ish redemptive yarn about an accused child molester who ends up coaching the Rwandan national cycling team, the members of whom are traumatised by memories of the genocide. Can Tutsis reconcile with Hutus? Can coach come to terms with his compromised past?

Can Disney pony up the dough for a movie deal? (Answer: probably.)

The problems with this story are immediately apparent to those who have cycled with intent: any professional bike rider who has even the slightest grasp of his country’s history – or worse, his country’s present – is simply not working hard enough. I’ve spent my share of time with professional cyclists, and they are not what I would describe as dialed in. The sport’s demands are just too onerous. A light training session constitutes five hours in the saddle, after which there’s not a lot of energy for perusing, say, a UNHCR white paper on the refugee crisis in CAR. I’ve interviewed cyclists who resemble corpses – by which I mean they look exactly like cadavers. These were not political conversations, insofar as they were conversations at all.

Anyway, my point is that cycling is inarguably the most brutal voluntary activity on earth, and it subsumes the demands of all other blood sports, war and politics very much included. Douglas Ryder, the impresario behind MTN-Qhubeka knows all this, but he’s worked around it handily. Back in 2007, Ryder founded what most wonks had long considered an impossibility: an African-owned, African-sponsored, African-managed professional cycling team designed to race the Grand Tours in general, and the Tour de France in particular. Dougie, as he’s affectionately known in local circles, was smart enough to grock the meta-narratives – Eritreans riding alongside Ethiopians; Hutus riding alongside Tutsis; white South Africans riding alongside black South Africans. While you and I may term this ‘reconciliation porn’, Ryder was happy to build a pedal-powered scale model of Thabo Mbeki’s African Renaissance.

That said, Ryder likes to win. He likes to win because winning feels good, and because winning is the point of sport – don’t let anyone, Ryder included, tell you otherwise. Indeed, Ryder wanted to win so bad that the team he assembled, on the back of significant buy-in from the South African cellular megalith MTN, was more advanced than most of the big names in Europe. (The cyclists, unlike a chunk of MTN’s workforce, are not on strike.) He knew that in the post-Armstrong era, cycling teams had to look and feel clean, and it helped to have a significant corporate social responsibility component. He paired up with a charity called Qhubeka, which provides locally assembled bikes to rural South African children. He hired top-notch scientists and nutritionists in order to add a dash of 21st century professionalism to a sport that had long relied on a combination of insane toil and rampant doping. He placed on his roster-hardened vets from Germany and Lithuania and Italy to turn his youngsters into pros.

He cyclists started to win.

Not just African races, but international events. This caught everyone’s attention, because Africans aren’t supposed to win – we’re supposed to smile next to our free bicycles and look skinny in our Lycra shorts. The first big European result came during the 2013 Milan-San Remo Spring Classic. In weather so foul the race had to be curtailed, the German Gerald Ciolek won in a sprint finish, beating superstars Peter Sagan and Fabian Cancellara in the process.

Suddenly, MTN-Qhubeka was a big deal, impossible to write off as a corporate South African whim, and a wildcard berth in the Vuelta a Espana followed. (Curiously, 2014 wildcards for the Giro d’Italia and the Tour de France, which along with the Vuelta constitute the Grand Tours, were not forthcoming, and were instead conferred on European teams with zero bone fides. Which was partly why everyone doubted that MTN would get anywhere in the sport.) The team acquitted itself admirably in the Vuelta, and its aggressive riding won it many fans both in the peloton and in cycling’s Swiss corporate aerie where the big decisions are made (see also: FIFA).

Nine men have been picked for the roster, five of them African. Bling was thrown at them: Cervelo bicycles, Samsung electronics, other unnamable gadgets. The Critérium du Dauphiné, an eight-day stage race that is seen as preparation for the Tour, tipped Ryder’s hand somewhat. His superb Eritrean climbing specialist Daniel Teklehaimanot won the polka dot jersey, the honour bestowed for claiming the most points on the hills. (Kenyan-born, South African-bred 2013 Tour de France winner Chris Froome took the general classification – a naturalised Englishman, he has ever been particularly gracious about his roots.) There were other encouraging signs. Louis Meintjes, the 23-year old South African who is perhaps the best cyclist this country has ever produced, made a courageous bid for a mountain stage win. The team looked cohesive, aggressive, and mature. Nothing slapdash about them. They were World Class.

But everything up until the first pedal stroke of the Tour de France counts as nothing more than practice. With this in mind, I called Ryder to find out how he was managing expectations. His squad is a canny combination of raw talent and grizzled experience, and includes big names like Norway’s Edvald Boasson Hagen and America’s Tylar Farrar, with newbies like Eritrea’s Merhawi Kudus, who is barely 21.

“We couldn’t be more ready if we tried,” insisted Ryder.

Their strategy, he said, was nothing more than to raise the funds for Qhubeka in order to provide 5,000 South African students with bicycles. (I know, right: Ryder talks the CSR line as well as anyone I’ve ever met.) Additionally, they wouldn’t mind, if it were at all possible, to win the white (or best young rider) jersey for Kudus or Meintjes, and maybe a stage or two, or perhaps the whole goddamned thing. The latter is out of the question, and Ryder noted that MTN doesn’t have the resources to protect a proper bid for the famed yellow jersey. But he promised aggressive riding, and I’ll take him at his word.

Unsurprisingly, no one is more bullish on African cycling’s future. “Do I ever think this team will ever be 100% African? – No,” he told me. “The international riders are fast tracking our African riders to success – having a rider like Edvald Boasson Hagen, who has been on two Tour de France winning teams with Froome and [Bradley] Wiggins” – the 2012 winner – “you can’t buy that experience. What I do see is that this international group will slowly become the support riders on this team. Also, we want people from all markets to build visibility for this team – our role is to spread the Qhubeka message.”

As for this being the beginning of an African era, Ryder did not disagree. “Do I think cycling will undergo the major change like marathon running did? Perhaps. But I definitely believe there’ll be a massive transformation happening in the next five to 10 years. MTN can’t sustain all the talent in Africa, but we want African riders to be involved in all the teams in the future. Hopefully over time there’ll be more investment in African cycling, largely because of our pioneering potential. It’s about the sustainability and the growth of it over the continent.”

I can’t lie to you people – I’m jacked. Three weeks of cycling goodness, of watching young men kill themselves while I simultaneously kill myself with potato chips and sloth. It’s a major moment for African sport, and a cultural watershed for a formerly racist, exclusive sport. It will teach us everything we need to know about the Meaning of Life. It will Change Us Forever. It will Bring Us Closer to God. It will Deliver Helicopter Shots of the French Countryside.

Photo: Riders from Africa’s first World Tour cycling team, MTN Qhubeka, prior to the start of the 1st stage of the Tour of Qatar 2015 over 136km from Dukhan to Sealine Beach, Qatar, 08 February 2015. EPA/KIM LUDBROOK