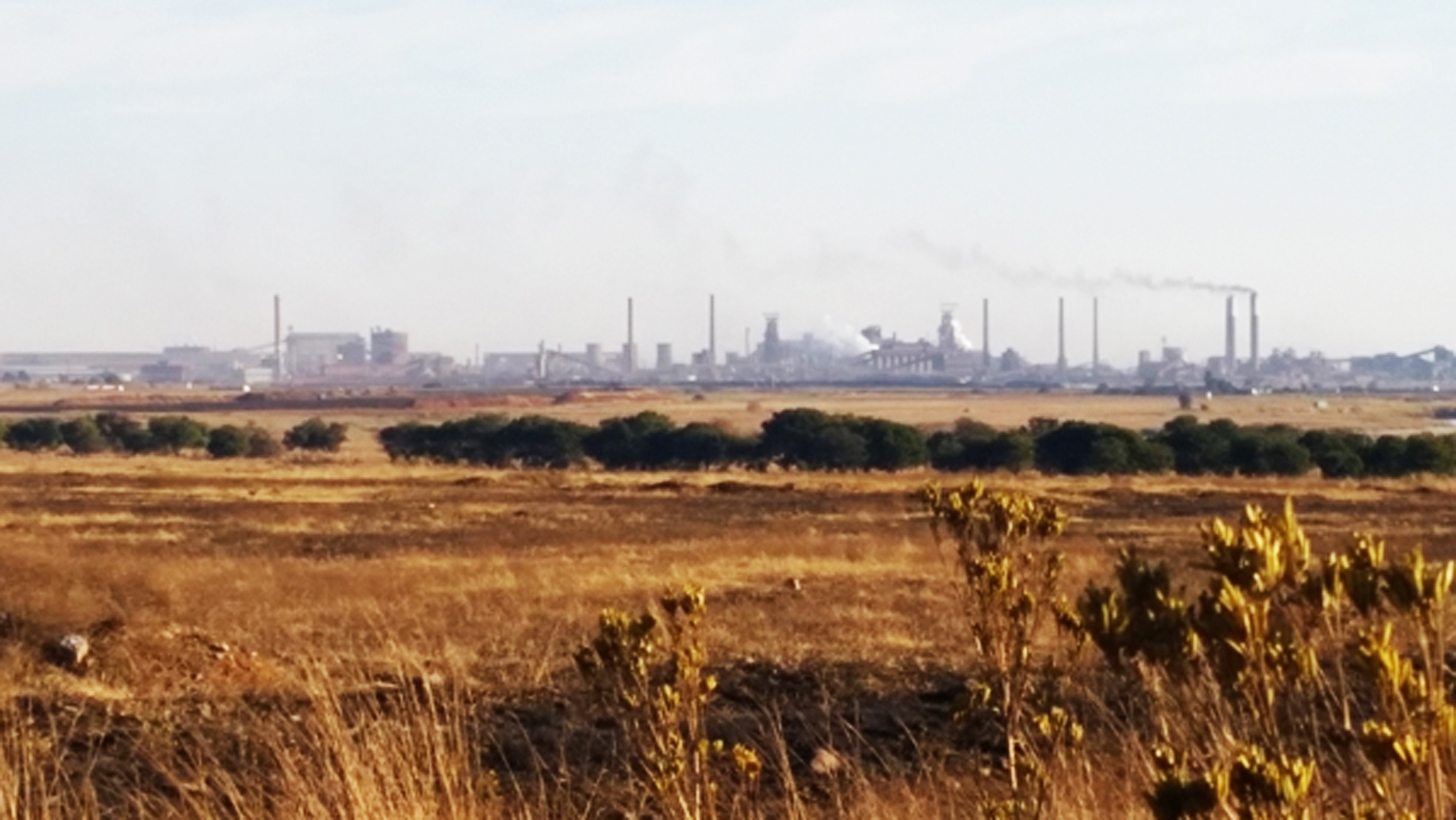 Earlier this week, the Vaal Environmental Justice Alliance formally released the long-sought Environmental Master Plan for the Vanderbijlpark Steel Works owned by international steel giant ArcelorMittal (AMSA). AMSA only handed over this Master Plan, a series of expert reports on the environmental and health impacts of the steel works compiled in 2003, in December 2014, after being ordered to do so by the Supreme Court of Appeal. By Melissa Fourie, Robyn Hugo and Nicole Löser for GROUNDUP.

The birth of Steel Valley

Dr Victor Munnik, researcher at the University of the Witwatersrand who has studied Steel Valley for many years, describes how the Vanderbijlpark Steel Works was built in the 1950s by the apartheid parastatal Iscor as part of a government initiative to establish industry on the Vaal coalfields. For most of its existence, the Steel Valley community living to the west of the Steel Works was a racially segmented society, with white smallholders as owners, retaining one or two black families as farmworkers or servants on each holding. This started changing by 1990, when black South Africans could buy land in “white areas”, and established themselves as smallholders in the area.

For many decades, the Steel Valley community argued that the Steel Works was polluting air, soil and groundwater in the area. Iscor denied that it was responsible for the pollution in Vanderbijlpark.

By 2002, the entire community of nearly 600 smallholdings, their houses, outbuildings and shops had disappeared. Civil damages claims brought against Iscor floundered as the steelmaker bought up many of the small farms. The area had been cordoned off with electric fences. Most of the population had been dispersed into neighbouring towns and townships.

However, Steel Valley residents would not go quietly: some of the ex-residents continued their battle. In his PhD thesis on Steel Valley, Dr Munnik describes how a “toxic tour” for overseas dignitaries, in which the steel factory was a “highlight”, as well as public protests during the World Summit on Sustainable Development in 2002, brought the Steel Valley history to the attention of the world. Ex-residents continued to take part in consultation processes made available under environmental legislation in the new South Africa. They formed a regional (Vaal Triangle) alliance with other fenceline and impacted communities. They achieved the integration of Steel Valley survivors into first a national environmental justice movement and then a global network of communities affected by AMSA’s pollution, which aims to hold AMSA accountable for its pollution worldwide. 1

For many years, the challenges of gathering persuasive evidence of pollution by AMSA and its predecessors, particularly in the face of its denial of any responsibility for pollution, has complicated efforts to hold the owners of the steel plant accountable.

In the early 2000s, under pressure from Steel Valley residents and regulators (particularly in view of the Constitution and its recognition of environmental rights, and new environmental legislation passed in the late 1990s) the company commissioned a “holistic integrated environmental Master Plan for the Iscor Vanderbijlpark Steel (IVS) Works, whereby all disciplines would be thoroughly researched, and all available historic information used and combined with the aim of providing an integrated environmental management plan for the Works”. (See here.)

But despite undertakings by Iscor to share the Master Plan with local communities, in 2003 they were only given a summary report of the Master Plan. This summary failed to answer their questions, and left the communities frustrated and angry. It also identified that various significant unacceptable environmental and human health risks existed at the site.

In November 2008, Environmental Management Inspectors (Green Scorpions) undertook a compliance inspection at the Vanderbijlpark Steel Works. (See here.) Not surprisingly, that inspection found a long list of violations with environmental and water laws, including a lack of permits, failure to comply with permits and uncontrolled atmospheric emissions (air pollution). A follow-up inspection in August 2010 found that AMSA continued to operate without certain permits and in violation of existing permits. In 2013, authorities instructed AMSA to close certain facilities for violating requirements to limit air pollution.

Despite the persistent allegations of water pollution at the site, and despite the findings of the Green Scorpions inspections in 2008 and 2010 in relation to violation of water laws, we have no evidence of any administrative or criminal enforcement action taken against AMSA or its predecessors by the Department of Water & Sanitation or its predecessors.

In 2011, with support from the then newly established Centre for Environmental Rights (CER), community-based organisation the Vaal Environmental Justice Alliance (VEJA) submitted a request in terms of the Promotion of Access to Information Act for the Master Plan for the Vanderbijlpark Steel Works. These documents were finally released to VEJA in December 2014, after the Supreme Court of Appeal upheld VEJA’s case, and – in a strident judgement – ordered AMSA to release the Master Plan and pay VEJA’s legal costs. (See here)

The Integration Report of January 2003 (which forms part of the Master Plan) makes clear that, at the time that the Master Plan was prepared, there was already substantial pollution at the Vanderbijlpark plant, particularly groundwater and soil contamination by a range of contaminants that include heavy metals. (See here.) It also recorded “potentially unacceptable impact” on the surface water of the Rietkuilspruit via the Rietspruit canal”. (See here.)

The report showed a “potentially unacceptable” risk to the environment and human health as these contaminants move through groundwater, with potential exposure through affected drinking water. 7 The Report also found that the risks to human health and the environment were “generally unacceptable” in the area between the contaminated areas on site and the western perimeter of the plant, and “for a distance beyond the perimeter”. (See here.) The perimeter and immediate surrounding areas of the site are identified in the Master Plan as the priority area for intervention: 9 a strip of land that houses residential areas such as Boipatong, Tshepiso, Bophelong, Bonanne and agricultural smallholdings”. (See here)

The Report noted that the affected aquifers “can generally not be remediated to acceptable risk levels through technical measures, over the short and medium terms. Such measures will require flushing of the aquifers with ‘clean’ water and/or steam and will in any event take several decades to improve the situation significantly”. (See here)

The Master Plan produced and prioritised 220 recommendations for action, and also divided them into measures that were regarded as: feasible, leading to a number of big remediation and technology update processes; and those that were too difficult or expensive and “technically impracticable”, which would be subject to “institutional measures”, that is, where remediation would not take place, but measures like a buffer zone created by the bulldozing of the Steel Valley houses would be put in place.

In many instances, it seems that “institutional measures” were preferred by AMSA over “technical measures” as means to remediate pollution, due to the “technical Impracticability” to remediate certain areas in the plant “to levels that will represent acceptable risk to human health and the environment”. (See here)

It is important to note that the Master Plan was commissioned by AMSA, and community organisations have now started the arduous process of assessing the quality of the evidence provided by the Master Plan. Initial findings by expert and scientist of Environmental Law Alliance Worldwide in the USA, Dr Mark Chernaik, have pointed out that, given that groundwater samples taken as part of the Master Plan reports showed detectable levels of cadmium, “cadmium toxicity should have been, but was not, a main focus of the investigation of groundwater contamination in the vicinity of AMSA”. Chronic exposures to very low levels of cadmium can cause renal dysfunction, including kidney failure. Residents of Steel Valley have long alleged significant health impacts from water pollution in the area.

The Master Plan was released with a summary report by AMSA compiled in 2014 “to place the so-called Vanderbijlpark ‘Master Plans’ and the progress made in terms of Environmental Management at this facility into perspective”. This summary essentially records measures taken by AMSA since the Master Plan was compiled – measures that AMSA says has cost hundreds of millions of rands to date. At least some of these measures were taken only after AMSA was directed to do so by the Green Scorpions.

In December 2014, new AMSA CEO Paul O’Flaherty announced that AMSA was committed to dealing with its “legacy” of environmental problems “openly and transparently” and stated that, “we intend reaching out and holding an NGO forum as quickly as we can . . . to talk through these issues,” O’Flaherty added that the group had “nothing to hide” and would adopt a “proactive” stance towards stakeholders. (See here)

While these sentiments are to be welcomed, historical liabilities remain. Adequate rehabilitation measures must be completed, and those who have suffered must be compensated.

Copies of the Master Plan have been archived in various places for public access, including the online archive of the non-profit South African History Archive, and the Northwest University, Vaal Campus. DM

Melissa Fourie is executive director of the Centre for Environmental Rights, a non-profit law clinic and advocacy organisation that works to advance environmental rights in South Africa and to give a voice to communities affected by environmental rights violations. Robyn Hugo is an attorney and head of the CER’s Pollution & Climate Change Programme. Nicole Löser is an attorney in the CER’s Pollution & Climate Change Programme. Views expressed are not necessarily GroundUp’s.

This feature was first published by GroundUp.