Congo: Sniffing out wildlife crime – and the corruption at its core 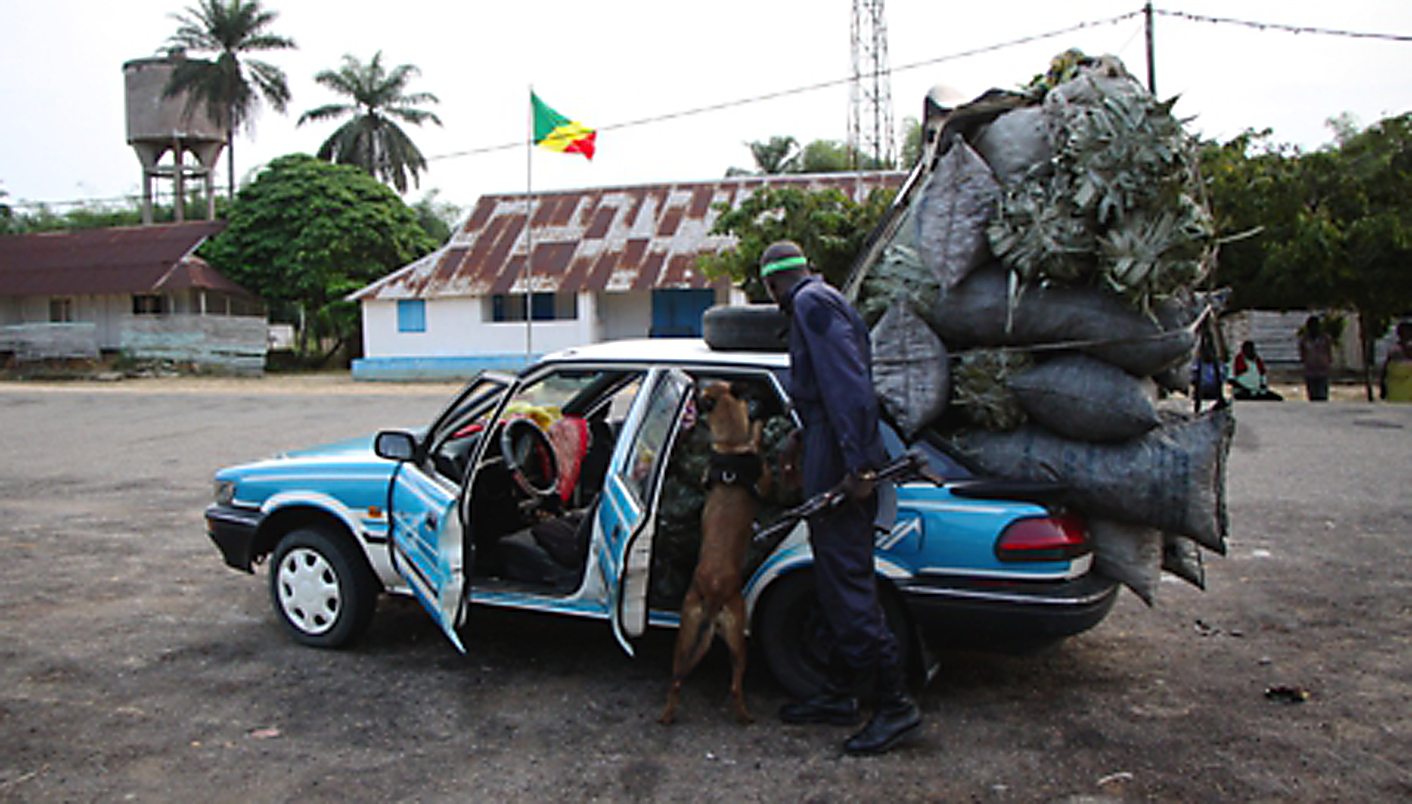 One after the other the carcasses were extracted from the crammed vehicle. Burnt, shrunken-back lips exposed grimacing teeth…a gruesome effect. As the pile of animals mounted up on the side of the road the overpowering smell of smoked and decaying bush meat became stronger. A haul of 40 animals in total, from pangolins, to genets to duikers – the scene seemed to cry “unsustainable”. A dispatch from ZANNE LABUSCHAGNE in the Republic of Congo.

BRAZZAVILLE: In late May 2015 a sniffer dog unit of the Project for the Application of Law for Fauna in the Republic of Congo (PALF) travelled to several police roadblocks on the inbound roads to Pointe-Noire, the Republic of Congo’s second largest city and main port. At the blockades three dogs, specially trained to detect wildlife products and weapons, were set to work by their handlers.

Conditions were challenging: high temperatures, un-cooperative travellers, and vehicles loaded to the brim – often with strong-smelling cargoes of palm wine, manioc or smoked fish. Despite this, the dogs’ success rate was impressive. During the mission they identified the location of an assortment of illegally hunted species, headed for the bush meat trade in Pointe-Noire, hidden beneath towering cargoes of people and luggage.

It is estimated that each year five million tons of bush meat are being exploited from the forests of central Africa. Diane Detoeuf of the Wildlife Conservation Society recently carried out surveys interviewing bush-meat hunters on the Bateke Plateau, in southwestern Congo. Detoeuf recounts that “a high percentage of hunters interviewed expressed that they are finding it increasingly difficult to find the species they once hunted in abundance” – an alarming indicator of how badly the bush meat trade has affected forest wildlife densities.

The fact that vehicles are now being checked for wildlife products on Congo’s roads, and in such a thorough manner, is a big step forward in the fight against the rapid degradation of forest fauna. However, conservation in natural-resource rich central Africa remains a multi-faceted challenge. The ‘forest mentality’ depicts wildlife primarily as food and a source of extractive income. Many members of the public up to high-level authorities maintain this mentality even though Congo’s wildlife laws have improved and are currently the second most stringent in central Africa. Convictions for wildlife crime can now lead to five years of prison time, but this is still low for criminals involved in highly profitable, illicit activities. Furthermore, wildlife criminals seldom receive the maximum sentence, and the kingpins of the illegal wildlife trade are often not convicted at all. The unfortunate reality is that this incredibly diverse country, in terms of both wildlife and habitat, is also very corrupt.

It is becoming increasingly clear that the biggest obstacle for conservation in Congo is corruption. When observed at a coarse scale the problem of corruption seems way too big to be taken on, but when it is divided into smaller categories and tackled piece by piece there is hope for its elimination.

This is exactly the approach taken by the PALF team in the Republic of Congo. PALF has been battling wildlife crime in Congo with a vengeance since 2008. Working closely with other NGOs such as the Wildlife Conservation Society and the African Parks Network, they gain information on key players in the illicit wildlife trade, not only within Congo, but networks spreading into CAR and Cameroon. Using this information, PALF combines several fields of expertise to carry out investigations, coordinate arrests in partnership with the relevant governmental authorities, and then follow up the legal procedures.

The addition of the three Malinois sniffer dogs to this team has hugely enhanced the efficacy of the project. Detecting illicit wildlife products in the chaos of an African market is a challenge in itself, not to mention carrying out an operation and making arrests in these environments.

“With the help of the dogs the team can now be in and out of a hot situation much more quickly, are more likely to find all the evidence needed for a case and can ensure that wildlife-traffickers are in fact caught red-handed and don’t just stash their products before being caught,” says Arthur F. Sniegon, an adventurous biologist from Czech Republic, who has been coordinating the dog programme for the past year.

The PALF dogs spend an average of twenty days a month in the field, rotating between the Maya-Maya international airport in Brazzaville and the main transport routes of the country. To date the dog team has assisted with six arrests discovered more than one ton of bush-meat and over a hundred live crocodiles, tortoises, pangolins and African grey parrots – a tribute to the hard work of a dedicated team of environmental and anti-corruption activists. Thanks to their tireless efforts laws against wildlife crime are gradually becoming more effectively implemented in the Congo.

As we drove away from the roadblock in a vehicle packed with the confiscated bush-meat we crested a hill and an impressive Congolese scene presented itself. Three palm trees were silhouetted against the sunset… behind them the grassland-forest mosaic stretched as far as the eye could see.

We stopped at a pocket of forest and released four pangolins, the only living creatures we had discovered all week. These may seem like small successes, but change is occurring, and people are taking note of the increasing resistance against wildlife crime in the Congo. Hopefully this at least will deter some of those opportunists that choose to exploit wildlife simply because it is too easy. DM

Main photo: Kama, one of the three PALF sniffer dogs, searches a loaded vehicle with the assistance of her handler (Zanne Labuschagne)