Marikana Report: The continuing injustice for the people of a lesser God 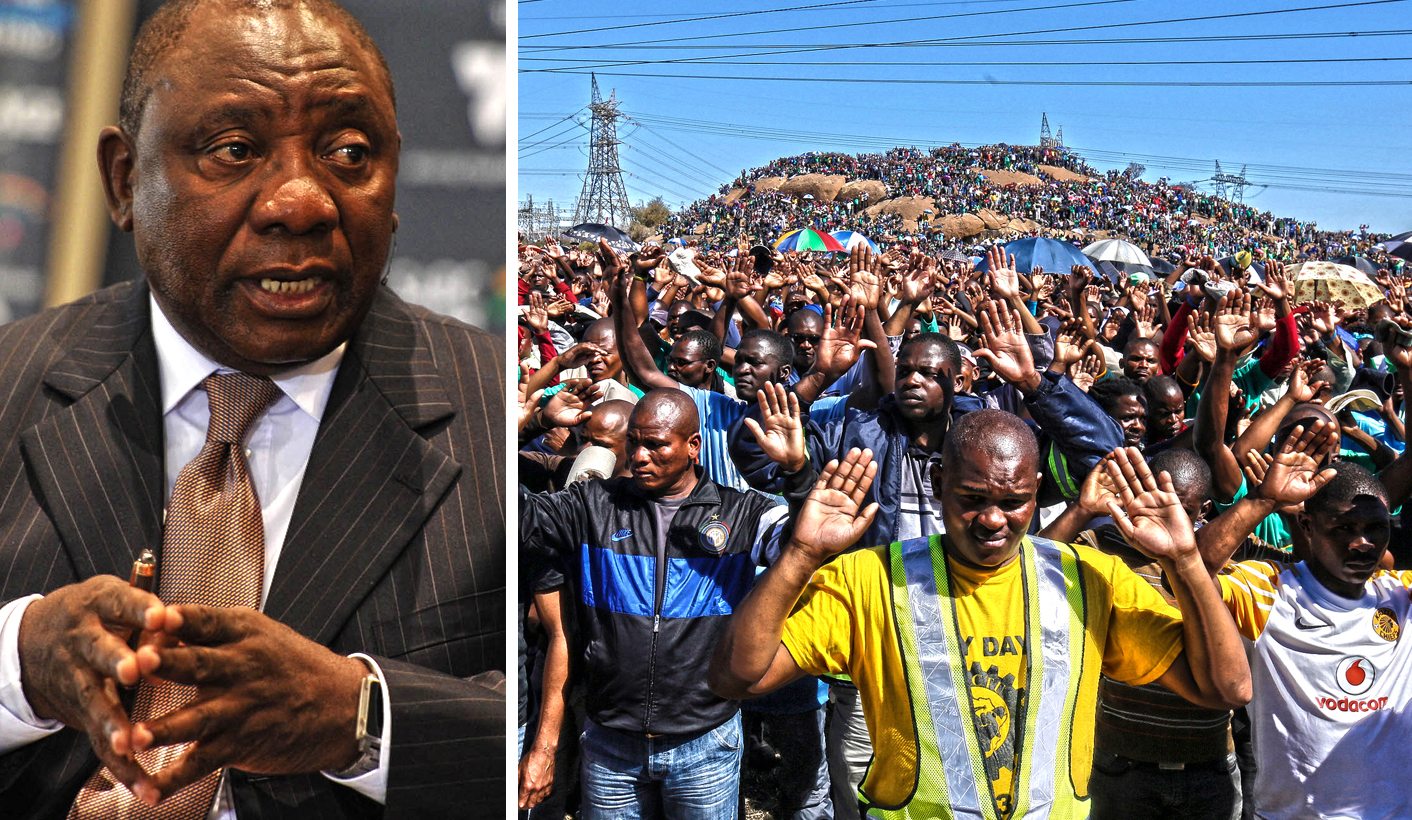 The big take-away of the report of the Farlam Commission was that an inquiry be held into the fitness to hold office of National Police Commissioner Riah Phiyega and former North West provincial commissioner Lieutenant-General Zukiswa Mbombo. This is primarily for attempting to mislead the commission, not for the massacre of 34 people on 16 August 2012. Nobody has been held directly accountable for the murders at Marikana; the prosecuting authority now has to investigate this. And no compensation was recommended because the terms of reference of the commission were not wide enough. So the torment of Marikana’s wretched people continues while Cyril Ramaphosa’s path to the presidency has been cleared - for now. By RANJENI MUNUSAMY.

The dotted line between the actions of Lonmin shareholder, and now South Africa’s Deputy President, Cyril Ramaphosa and the bodies that lay on Marikana’s scorched earth oozing blood may have been evident to a layperson. The phone calls, the emails, the urgent flights and secret meetings all showed a man desperate for the government and police to “act in a more pointed way”. “Concomitant action” was the infamous term he incorrectly used. Counsel for the injured and arrested persons Dali Mpofu told the Farlam Commission of Inquiry that Ramaphosa’s intervention was “infested with a litany of conflicts of interest”.

But for Judge Ian Farlam to pin the massacre on the person holding the second highest post in government, Ramaphosa would have had to be standing behind the police line with a loud hailer instructing the police to fire at the striking Lonmin workers. Farlam said in his 646-page report that the commission could not find “even on a prima facie basis that Mr Ramaphosa is guilty of the crimes he is alleged to have committed”.

“The commission is of the view that it cannot be said that Mr Ramaphosa was the ‘cause of the massacre’,” the report states.

For the injured and families of those who died, and those who continue to live in poverty and indignity at Marikana, this is why there was always going to disappointment with the outcome of the commission. Because they had been so wronged, because their suffering was so great, they looked for accountability at the highest level. They had primed themselves for everyone who they perceived to be the perpetrators of their pain to fall from grace and be punished – starting with the man who now occupies the second highest position in the state, and is in line to move up to the top, now unhindered.

That was never going to happen.

What did happen was the exact opposite. Over a thousand days since the events at massacre that resulted in the deaths of 44 people, and an exhaustive commission of inquiry, not a single person is being held accountable. There is no justice or closure for a single life lost or family destroyed.

President Jacob Zuma had the Marikana report in his possession for 86 days, during which time he said he would be applying his mind to the findings. On Thursday night, he announced some of the key findings and recommendations, without any specific actions on his part – apart from asking the affected ministers to study the commission report and advise him on the implementation of the recommendations. Apparently “applying his mind” over the past three months did not include asking the ministers to advise him during that time.

Zuma also wrote to National Police Commissioner Riah Phiyega to inform her that the commission recommended that an inquiry should be held into her fitness to hold office. He said the Minister of Police would inform Mbombo on the matters affecting her. Phiyega and Mbombo get a drubbing in the report, for their bumbling actions during the police operation, trying to involve themselves in political matters and their unsatisfactory testimony before the commission.

Judge Farlam agreed with the submissions of the evidence leaders that Mbombo took “irrelevant political considerations into account in approaching the situation but also that the National Commissioner participated in inappropriate discussions about political considerations”. This was particularly in regard to them discussing the possibility of Julius Malema (following his expulsion from the ANC) “coming to Marikana and taking credit for defusing the situation”.

With regard to Phiyega and Mbombo’s testimony to the commission, the report states: “In the circumstances, the commission recommends that steps be taken in terms of section 9 of the SAPS Act to inquire into their fitness to remain in their posts and whether they are guilty of misconduct in attempting to mislead the commission.”

Judge Farlam says elsewhere in the report regarding the police that it was “ill planned and poorly commanded operations, which caused the deaths of 34 strikers on 16 August”. While not pointing at direct culpability, there are some rather damning conclusions, particularly about the “defective” plans that led to the massacre. “It is clear that Lieutenant General Mbombo foresaw there was a high risk of bloodshed if her decision were implemented during the course of 16 August 2012…” the report states.

Farlam referred all the police officials who were at the two killing sites to be investigated. “The commission recommends a full investigation, under the direction of the Director of Public Prosecutions in North West, with a view to ascertaining criminal liability on the part of all members of the SAPS who were involved in the incidents at scene one and two”.

“The commission also recommends that all the killings and assaults that took place between 11 and 15 August 2012, should be referred to the Director of Public Prosecutions, for further investigation and to determine whether there is a basis for prosecution,” the report states.

None of the findings were particularly surprising. So what was the delay about?

One finding of the report, however, is not as cut and dried as Zuma made it out to be. While the commission cleared Ramaphosa and former Mineral Resources Minister Susan Shabangu of the accusations against them, the findings against former Police Minister Nathi Mthethwa were not as clear.

Zuma said: “The commission found that the executive played no role in the decision of the police to implement the tactical option on 16 August 2012, if the strikers did not lay down their arms, which led to the deaths of the 34 persons.”

“The commission wishes to emphasise that it is not finding that such ‘guidance’ was given. It is, however, unable in the light of what has been said above to find positively in Minister Mthethwa’s favour on the point.”

This may not be an adverse finding against Mthethwa but it is something that is open to interpretation, and no doubt will be pounced on by the plethora of legal teams pursuing criminal and civil actions. Zuma cannot be seen to be throwing Mthethwa under the bus as this might cause further turbulence in ANC structures in KwaZulu-Natal, his and Mthethwa’s home constituency. His neat hemming up of the findings against Mthethwa is therefore not incidental.

By and large, the commission found a multiple failure of all involved resulted in the violence at Marikana, but in language that is extremely cautious. It found that Lonmin did not use its best endeavours to resolve the labour dispute and did not respond appropriately to the threat and outbreak of violence. But the company that profits from the sweat of poorly paid workers got off fairly lightly.

Lonmin’s failure to comply with the housing obligations under the social and labour plans has been referred to the Department of Mineral Resources, “which should take steps to enforce the performance of these obligations”. The commission found that the company’s failure to provide proper housing “created an environment conducive to the creation of tension, labour unrest, disunity among its employees or other harmful conduct”.

In almost three years since the massacre, the workers live and work in the same conditions that contributed to the violent protest in 2012. Lonmin did not act to correct the situation, and a slap on the wrist from the commission is hardly stimulus to do so now.

Farlam said he did not agree that there was a toxic collusion between the police and Lonmin, a finding that runs contrary to the narrative of the workers and the victims’ families. This finding will sting. The commission did not recommend any form of compensation for those injured or dependents of the deceased, saying the terms of reference were not wide enough to cover this issue.

The commission also found that the two unions involved, the National Union of Mineworkers (NUM) and the Association of Mineworkers and Construction Union (Amcu) did not do enough to prevent the violence. The report said Amcu members sang provocative songs and made inflammatory remarks, which tended to aggravate an already volatile situation. The NUM wrongly advised rock drill operators that no negotiations with Lonmin were possible until the end of the two-year wage agreement and also did not take the initiative to persuade and enable Lonmin to speak to the workers.

After waiting 34 months to hear why their loved ones and colleagues were killed, the people of Marikana have to contend with the fact that there is as yet no justice or accountability for the extreme violence visited on them, and no compensation owed to them. They live in indignity and die in indignity. Their blood, their sweat and mostly their tears mean nothing to the rich and powerful who benefitted from their toil and their votes.

Day after day, they pass the killing fields of Marikana and go deep into its bowels so that the balance between the poor and the rich, the prosperous and the damned is maintained. Those who went on strike were people who tried to upset that balance so that their lives might be better. For that they were shot and killed by a state that is meant to protect them.

Those who continue to live there, in sorrow and hopelessness, are the wretched of the earth.

The children of a lesser God.

Marikana is and always will be a tale of utter shame. DM