Explainer: Who are the Cuban Five?

Explainer: Who are the Cuban Five? 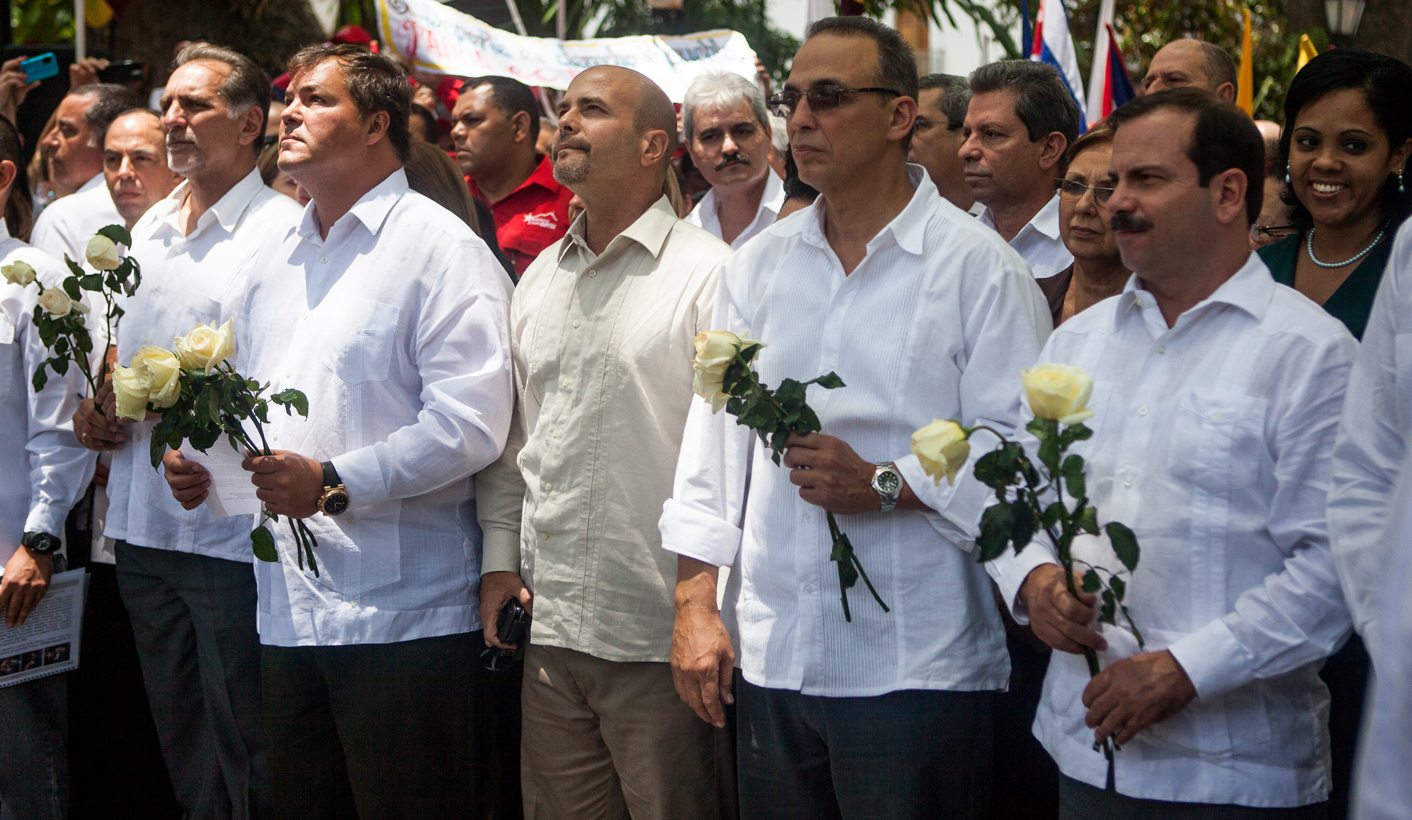 The ‘Cuban Five’ are being given a hero’s welcome on a trip to South Africa taking place currently. Who are the five, and what is their significance to the Alliance? By REBECCA DAVIS.

Gerardo Hernández, Antonio Guerrero, Ramón Labañino, Fernando González, and René González. These are names that probably mean little to the majority of South Africans, but one glance at their itinerary while they’re in the country should establish the esteem in which they are held by the ANC, the SACP and unions in particular.

The Cuban Five’s schedule is jam-packed from the minute they set foot in Johannesburg on Sunday. A reception with ANC Secretary General Gwede Mantashe awaits them immediately. On Monday, they’re whisked off to Cape Town to take part in events with the ANC Western Cape, and for the next two days will also be participating in various meetings and caucuses in Parliament.

On Thursday, it’s back to Johannesburg for ANC rally activities and a ceremony in conjunction with the National Education, Health and Allied Workers’ Union (NEHAWU). Friday sees them participate in the celebrations to mark the 60th anniversary of the Freedom Charter, and on Saturday they’ll be at an ANC symposium on the economic blockade against Cuba. From Sunday to Thursday of the following week they’ll be travelling to Limpopo, KwaZulu Natal and Free State, before concluding activities in Gauteng wave them off back to Cuba on Saturday 4 July.

Who are these men, and why is the Alliance laying out the red carpet for them?

The Cuban Five were intelligence officers arrested in the US in 1998 and convicted of crimes ranging from espionage to murder. The five were sent to the USA as part of a network called La Red Avispa to investigate the activities of militant Cuban exile groups plotting to overthrow Fidel Castro’s regime. Cuban exiles were implicated, for instance, in the 1976 downing of a Cuban passenger jet travelling between Barbados and Jamaica, with 73 people killed. Fifty-seven were Cuban.

US intelligence operatives were reportedly aware of the men’s presence in the US to monitor anti-Castro groups, and simply kept them under surveillance for some years. Things changed after 1996, however, when two planes flown by a group called Brothers to the Rescue – which dropped pro-democracy pamphlets on Cuba – were shot down. Four pilots were killed.

In the wake of this, erstwhile US President Bill Clinton tightened sanctions against Cuba. In September 1998, the five men were arrested in Miami. They were accused and convicted of spying against the United States. Their leader, Gerardo Hernández, was also convicted of conspiracy to commit murder in connection with the 1996 shooting down of the Brothers to the Rescue planes. Their sentences ranged from 15 years to life.

The trial of the Cuban Five attracted widespread controversy, because it was held in Miami, where Cuban dissidents were viewed as heroes. The United Nations Working Group on Arbitrary Detention and Amnesty International both issued separate reports, in the years to come, expressing concerns about the fairness of the trial. Appeals courts went on to overturn the convictions and reinstate them.

In December 2014, three of the men were released, with the other two having been previously freed. The release was undertaken by the Obama administration as part of a swap to secure the freedom of Alan Gross, an American contractor imprisoned in Cuba on suspicion of being a spy. More widely, it marked the restoration of diplomatic relations between the USA and Cuba.

The men returned to Cuba as heroes, where for decades their images had been celebrated and mourned as icons of the revolutionary struggle. In the USA, response to their release was far more mixed, with the family of one of the pilots killed in the 1996 plane downing expressing consternation about the release of Hernández in particular.

The Five’s visit to South Africa will see them thank and be thanked. The ANC lobbied for the release of the Cuban Five, with a resolution in this regard passing in the National Assembly last August. Among other points, it held that “the Cuban Five’s actions were not directed at the United States government, and that they did not engage in, nor plan any conspiracy against the government, but rather that they infiltrated terrorist organisations in Miami who were planning terrorist attacks on Cuba”.

South African Nobel prize-winner Nadine Gordimer was also a vocal advocate for the release of the Five, who responded by paying glowing tribute to Gordimer upon her death last July.

But the expressions of gratitude during their visit will be a two-way street. Three of the Cuban Five – René González, Gerardo Hernández and Fernando González – served as volunteer combatants in Angola against the Apartheid military. They were among an estimated 375,000 Cubans to do so.

“It was an honour for a young revolutionary to go to Angola and to be part of that effort,” González wrote of his time in Angola in 2012, describing the period as a “milestone” in his life.

“A few members of my graduating class who, for health reasons, weren’t allowed to join the group of us going to Angola appealed the decisions of the medical commission and fought to be accepted. They moved heaven and earth, and eventually were allowed to join. It’s an example of the importance we gave to being part of the experience in Angola and the enthusiasm with which we welcomed the opportunity.”

The ANC’s warm relations with Cuba have continued well past the advent of democracy in South Africa. Three thousand South African medical students are currently training in Cuba, the Department of International Relations and Cooperation (Dirco) said on Sunday.

Cuban doctors, engineers and technical experts are also employed throughout South Africa, though these appointments have not been without controversy. Both the DA and the EFF in the Free State protested against the employment of 38 Cuban engineers, accusing the ANC of overlooking locals with the necessary skills.

At the time, the DA accused the provincial ANC branch of being “so infatuated by an outdated revolutionary romanticism, they are unable to think clearly”. DM

Photo: The five Cuban ex agents who were released by US after being imprisoned accused over espionage in the USA, Rene Gonzalez (L), Ramón Labanino (2L), Fernando Gonzalez (R), Antonio Guerrero (2R) and Gerardo Hernández (C), receive a tribute during a welcome ceremony in Caracas, Venezuela, 04 May 2015. The five former agents arrived to the country to pay tribute to Venezuelan late President Hugo Chavez. EPA/MIGUEL GUTIERREZ