Charity, Inc: How the CEO SleepOut perfected the age of celebrity giving 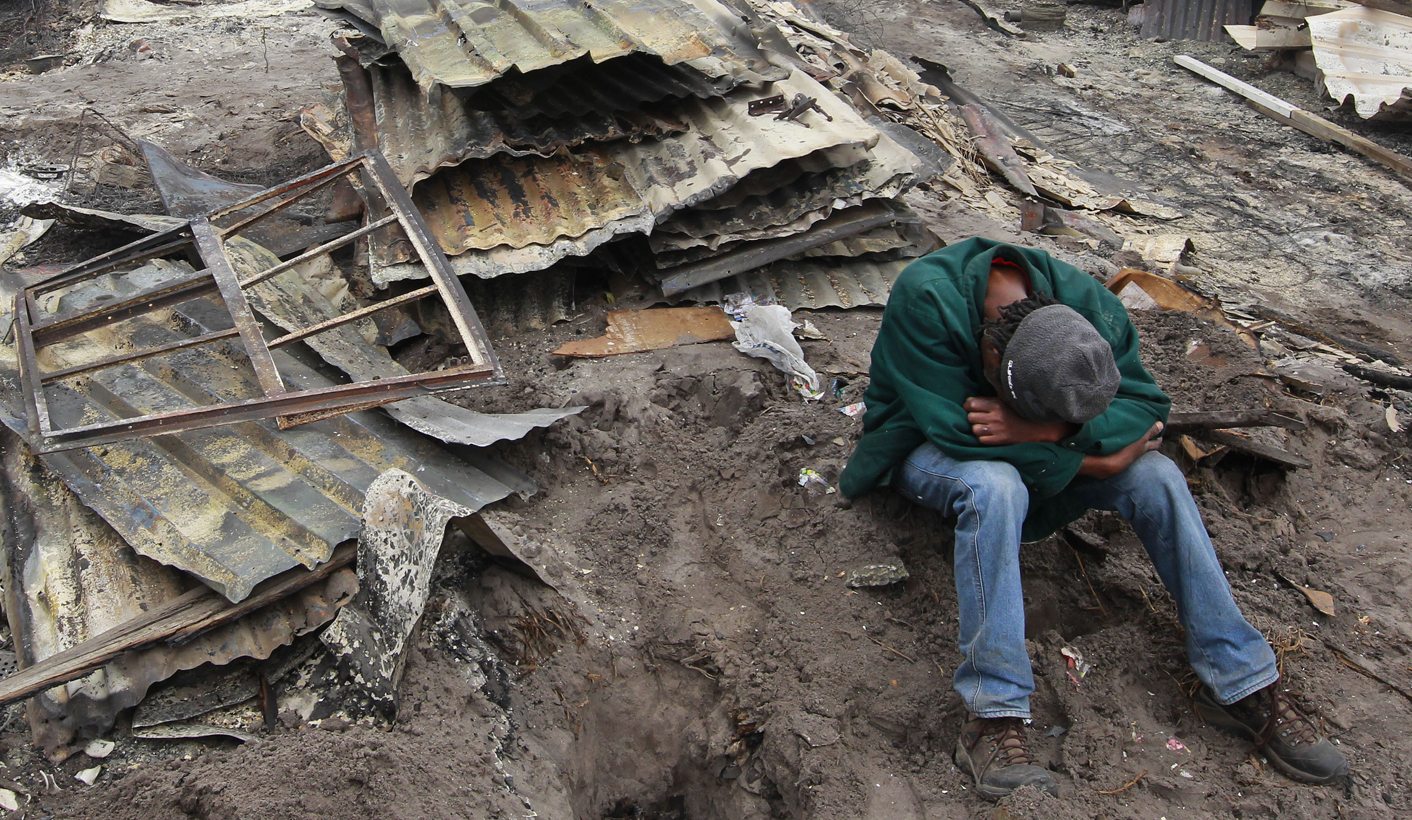 In a society that blindly venerates rich semi-celebrities, something like the 702 Sun International CEO SleepOut probably seems like an awesome idea. Here’s why it wasn’t. By RICHARD POPLAK.

Beware of practising your righteousness before other people in order to be seen by them, for then you will have no reward from your Father who is in heaven. Thus, when you give to the needy, sound no trumpet before you, as the hypocrites do in the synagogues and in the streets, that they may be praised by others. Truly, I say to you, they have received their reward. But when you give to the needy, do not let your left hand know what your right hand is doing, so that your giving may be in secret. And your Father who sees in secret will reward you.

Man, those were the days.

I’m referring, of course, to the time before Charity Inc., back when humans were encouraged to give away a portion of their bounty quietly, in order to preserve not only their own modesty, but the self-worth of those they were ostensibly helping. In ancient Abrahamic cultures, the paying of tithes—tzadek in Hebrew, and much later zakat in Arabic—was a simple obligation. As societies evolved, tithing became distinct from paying taxes—“Render to Caesar the things that are Caesar’s, and to God the things that are God’s,” said Christ, controversially. It was all a way for cultures to maintain a semblance of equanimity, a form of heavenly-ordained socialism that was destined not to last, and has now been reduced to just another reality TV logline.

I’m the last person to advocate a regression to the Days of Yore, when Yahweh was Yahweh, men were men, and toothaches were terminal. But it’s interesting how Judeo-Christian notions of charity have been discarded in the service of Celebrity Giving—the whizz-bang, paparazzi-accompanied poverty-porn that is the hallmark of cultures that venerate CEOs as high priests. I offer as Exhibit A the recent 702 Sun International CEO SleepOut, a “global challenge” newly imported to South Africa in order to raise money for, and awareness of, the plight of homeless children.

Indeed, 250 captains of South African industry—such as there is any—were last week determined to raise the profile of this “invisible” scourge. But what scourge were they referring to, exactly? The most recent study of South African homelessness was undertaken in Cape Town by the Western Cape’s Department of Social Development and Early Childhood Development, and published in March of this year. The researchers interviewed 2,508 respondents about life on the streets of the Mother City, and found that “many cited problems with adequate housing as their reason for being homeless. Just over 13 percent of the people living in shelters said they had left home because of family problems. Substance abuse also featured. Other reasons cited include gangsterism, being a foreigner and struggling to find work, having no family, unemployment and even ill health.”

Speaking of ill health, a 2010 study published in the journal Development Southern Africa found that about half of all homeless people suffered from mental illnesses. What’s more, the majority of homeless, at least according to the Department of Social Development and Early Childhood Development study, didn’t actually live on the streets, but instead slept in shelters, and were therefore literally invisible—at least to those of us who don’t frequent these filthy, underfunded nightmare-scapes.

None of which explains what “homelessness” is in a South African context. For that, we need to consider how those same studies cited above have found a significant percentage of the city’s homeless aren’t homeless at all, but live in faraway townships, and are therefore considered “temporary overnight sleepers”. This immense cohort is on the street because the mechanisms of Apartheid have not been dismantled, and they cannot afford to travel from home to work. “Chances are that this is a typically South African phenomenon,” the academic Jacques du Toit has written, “and there are similar groups of homeless people across all six South Africa’s metropolitan municipalities, since the peripheral location of townships and informal settlements is characteristic of South African cities.”

The definitions get trickier: the South African Homeless Peoples’ Federation regards informal settlement dwellers as homeless, but acknowledging that outlook would nudge our CEOs into dangerous political waters. After all, a context-free homeless person, like a rain-soaked YouTube kitten, can melt even the toughest venture capitalist’s heart. A person who has illegally occupied a plot of land is an irksome glitch in capital’s matrix, and must immediately be bulldozed into oblivion.

By now you likely know where I’m going with this. Our CEOs and their numerous corporate sponsors picked an issue that no one with a soul could object to, and stripped it of context in order to “solve” it. In a self-aggrandising display of philanthropic pantomime, they took to the streets of the City of Sand in their be-logoed boxes, armed with about a billion rand’s worth of outdoor clobber and a bottomless supply of cup-a-soup—and instead of raising awareness, they rebranded it.

Money, however, they did raise. Twenty-four million South African rand. A king’s ransom. All of this cash will go to the outfit Girls & Boys Town, an at-risk-youth development initiative, and a solidly good cause by anyone’s estimation. But what does this do for the cause of homelessness at large, given Girls & Boys Town’s relatively narrow mandate? Has the homelessness “issue” been properly addressed in Australia, the United Kingdom, and elsewhere that the “ CEO SleepOut global challenge” has been met. Of course not. Homelessness, or at least the shopping-cart pushing, shopping-bag wearing, Robin Williams-playing iteration thereof, is nearly impossible to address. Which means Australian and British CEOs can continue giving each other reach-arounds until the End of Days, hitting all of their corporate social responsibility quotas and earning some gripping cocktail party stories in the process, without anyone really questioning them about deliverables.

The South African version of homelessness, at least as its defined by those who have studied it, is the inevitable result of a catastrophic socio-economic meltdown, one that our CEOs can help to stem by not being CEOs. Or, rather, by being different CEOS, the kind of CEOs that come clean about the very particular challenges facing South Africa in this, the twenty-first year following apartheid. After all, this ain’t the UK, nor is it Australia. A developed-economy celebrity charity event cannot simply be dumped into the South African maelstrom without demanding a huge moral and ethical brain freeze. R25 million just isn’t going to save the homeless children. But political and economic change will. And not a single CEO braving Johannesburg’s Coldest Night 2015, nor any of their celebrity enablers, was courageous enough to say so.

“I see debate on Twitter streets about . R25m for our destitute kids looks good to me. If you think it’s flawed, do it better!” Tweeted ex-Democratic Alliance Parliamentary leader Lindiwe Mazibuko, from the CEO puppy-mill of Harvard University. She was articulating the sentiments of a sizeable haters-gonna-hate contingent, who argued that at least these CEOs were doing something, and that individuals like Frank Magwegwe, who worked his way up from homeless dude to investment banker, were changing South African perceptions of poverty. But that’s just not true. The fact that Magwegwe’s story is a story at all proves how hard it is to shapeshift from street person to money man.

Outside of the reality TV show setting, sans cameras and blankies and branded homeless person boxes, there are lots of people doing something about poverty alleviation. Many solid civil society initiatives and charities have undertaken decades of real work in attempting to address the systemic socio-economic ills that bedevil this country, and no one makes them hot chocolate at midnight on a Sandton boulevard.

As for the homeless, what do they want? I dunno—go and ask them. My guess is that most have no clue that the 0.1 percent took a night off to play at being homeless for their cause. They might wonder why all these fancy people didn’t just hand over the money quietly, without fanfare, without cameras, without all the corporate flimflam? They might ask why these high priests found it necessary to perform empathy when empathy is a deeply personal engagement, a communion between souls that happens on the QT? They might remind these CEOs that when it comes to benevolence, there’s no need to tell the left hand what the right hand is doing?

Regardless, the laws of charity are ancient and fair. The CEO SleepOut was many things, but above all, it subverted an age-old invocation—“when giving to the needy, sound no trumpet before you”. Instead, the cacophony of trumpet-blowing will take an eon to fade. So we must ask: who benefited most? The needy? Or the high priests in their gorgeous sleeping bags, filled up on cup-a-soup? DM

Photo: A South African resident of Masiphumelele informal shack settlement sits next to his destroyed home after a fire destroyed more than 1500 homes in Cape Town, South Africa 02 May 2011. EPA/NIC BOTHMA