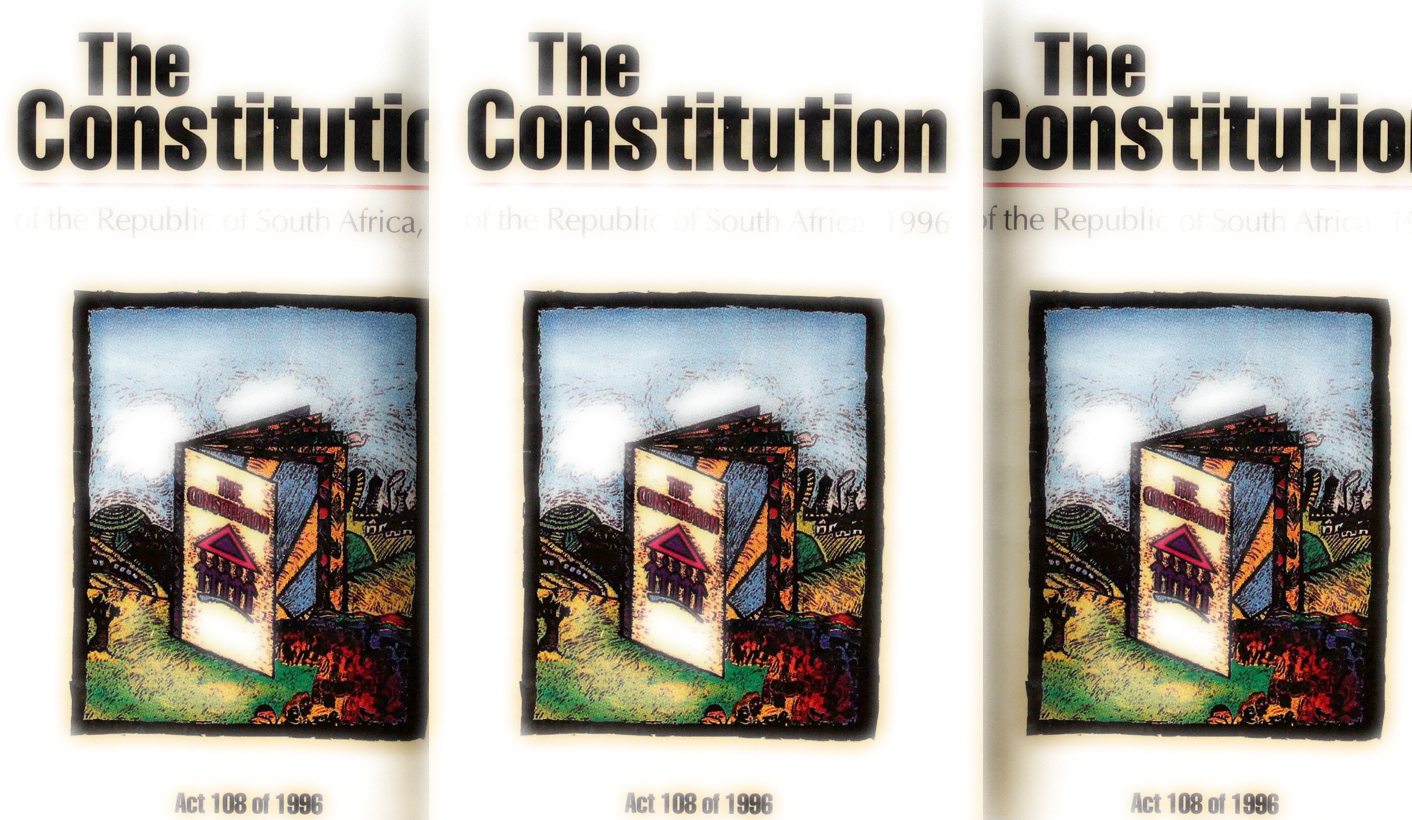 One of the most troubling but not entirely unexpected revelations in a study by key author and researcher Dr Dale McKinley on the relationship between civil society and the Constitution in post-Apartheid South Africa is the assertion that “at the highest levels of the ANC and the state there is a conscious misrepresentation of core Constitutional directives/principles around the separation of powers that is being used politically as a way of trying to avoid democratic oversight and accountability.”

McKinley’s report, Riding the Transitional Rollercoaster – The Shifting Relationship between Civil Society and the Constitution in post-Apartheid South Africa, and completed for the South African History Archive (SAHA), was launched in Cape Town on Thursday. It is based on over 30 hours of interviews with community leaders, activists, academics and lawyers, and provides a sweeping overview of the relationship between civil society, government, the country’s legal system and ordinary citizens over the past 20 years.

It suggests that “one of the biggest ironies” is that while the Constitution has been hailed and affirmed by many as ‘transformative’, “the very judiciary that is Constitutionally mandated and entrusted to administer justice – through the Constitution – has struggled to transform. This is a crucial matter for civil society since that judiciary is one of the main avenues through which ordinary people experience the legal system and seek justice, with the Constitution as the ultimate arbiter.”

While the Socio-Economic Rights Institute (SERI) was one of the legal CSOs that had used the courts more than most over the last several years on behalf of poor communities, according to SERI’s Jackie Dugard, the institute had to return to both the Constitutional and high courts “time and time again … to try to force the government to do what the court has ordered it to do.”

Lawyers for Human rights had experienced the same in relation to refugee access and detention cases. And while one of the outcomes was that LHR could secure the rights of individuals and groups, according to LHR’s Jacob van Garderen, there was no “systemic impact.”

McKinley found that at the heart of the increasingly conflictual relationship between civil society, the ruling party and the state is the manner in which the Constitution is understood, interpreted and acted upon.

“Crucially”, writes McKinley, “when the approach of the ANC/state becomes one of misrepresenting the Constitution to wage political power battles this then also impacts further on people’s trust, not only in government but also in the Constitution itself.”

If political position became the “main determinant” of an adherence to and respect for the law “then it is a short step to determining ‘immunity from prosecution, or [the] impunity with which you can disregard the law’”.

McKinley’s study quotes Advocate Geoff Budlender’s (founder of the Legal Resources Centre and acting High Court judge) experience with the state as one such example; “It [has] turned out that if you don’t get it right you’re not in deep trouble and people have learnt that lesson. If [parliament’s] Standing Committee on Public Accounts (SCOPA) or the Public Protector asks you a question you [can] ignore it … because there aren’t any consequences,” said Budlender.

McKinley warned that it appeared as if “political elites” within the ANC and the state increasingly viewed the Constitution, and more specifically its attendant rights and democratic institutional architecture, as “negative constraints” on the exercise of power.

“If so, then the subsequent political trajectory could well ‘land up justifying a movement against the current Constitution that could lead us towards an even more conservative Constitutional order than we have at the moment’. Whether or not such a trajectory does ultimately move in that direction, it is already having a major impact on people’s understanding of, and approach to, the law/ Constitution.”

Under the heading ‘The State of the Constitutional State’, McKinley writes that there is “broad agreement” that there were “a number of highly troubling ‘big issues’ facing the country and its inhabitants” in relation to respecting and realising the broader values and vision of the Constitution. These included high and ever-increasing levels of inequality, soaring levels of corruption within the public and private sectors, high unemployment, worrying levels of violence and intolerance as well as “the seeming impunity with which those who possess political and economic power act.”

“Leaving aside those – evidently including the President of the Republic – who for varying reasons, would rather see South Africa operating under a different kind of institutional and legal ‘order’ other than a Constitutional democracy,” said McKinley, “there can be little argument that a majority of people, including within civil society, agree that twenty years on from the democratic breakthrough South Africa is navigating in perilous waters.”

Where there was disagreement about the present ‘state of the Constitutional state’ within civil society though, he says, it relates broadly to whether the identified problems constituted an “imminent threat to the Constitutional ‘order’”, whether they could be overcome within the boundaries of that same ‘order’ and whether “enough people actually believe and have trust in, that ‘order’ to turn the ship around”.

Various activists, academics and political commentators seem to suggest that while there are worrying signs, the Constitution still enjoyed “social legitimacy” and that South Africans remained engaged.

Civil society activist S’bu Zikode told McKinley that he believed present problems were resolvable as long as “the country really remains in the hands of South Africans” and was not “remote controlled by foreign forces which are not necessarily worried about anything in South Africa”.

Zikode does not think that “we are in that much trouble” because it is individuals who are the forefront of “the troubling things that are happening”.

Author and Constitutional expert Richard Calland is quoted as saying that “we continue to have a Constitution that enjoys, despite some pushback from the new right, a large amount of social legitimacy [and] I believe that’s still the case”. Calland added that was most concerning is that the Constitution “still doesn’t matter enough to enough people and still hasn’t palpably and tangibly been seen by working class people to have benefited them”, it remains “vulnerable”.

Research Associate with the Institute of Security Studies, Judith February, is of the opinion that “South Africans are still very engaged [and] … there’s everything to fight for” and that the biggest challenge for civil society is “fatigue … that sets in because we get so tired of the same thing. [So] we need to be careful that things don’t slip under the radar because [of] our tolerance levels and this fatigue.”

However Jackie Dugard, Associate Professor of Law at Wits and Jane Duncan, Professor of Journalism at the University of Johannesburg, were less optimistic.

According to Dugard, “I think we are in trouble, I think the Jacob Zuma regime is hell-bent on siphoning off as much money out of the system as it can, on securitising everything, on making sure everyone is bugged or scared or assassinated. I think it is actually quite a political crisis that we’re in”.

Duncan’s view is that of a “political elite [resorting] to desperate measures, in order to protect their grip on the state”. Even though she thinks that “the Constitution prevents them from entering into outright repression … what it is doing is that it’s driving repression underground”.

In conclusion McKinley noted that it needed to be acknowledged that the forces of civil society in post-Apartheid South Africa had remained “absolutely central to not only providing a direct and indirect vehicle for a diversity of individual and collective democratic voices but also to sustaining a struggle to contest societal hegemony.”

Various interviewees suggested what needed to be accomplished in future with most agreeing on more co-operation between various organisations.

Section 27’s Mark Heywood argued for a building of consensus “on what the Constitution actually represents for us; for progressive civil society to have that debate. And then to analyse the different parts of the Constitution and say, what are some of the critical victories that are there… low-hanging fruits that, if you won on this you would have a knock-on redistributional effect, a knock-on economic effect, an empowering effect on communities”.

As an example he cited that “a fight on basic education is not just about children, it’s about rural development, it’s about electrification [and] it’s about employment creation.”

Interviewee Janet Love suggested that what was required was a collective discussion by civil society around those “parts of the Constitution that … need to be working properly in order for the Bill of Rights to be delivered on in any shape or form. This would include general Constitutional principles of transparency, accountability, inter-governmental cooperation [and] independent institutions”.

Activist John Clarke argued for the creation of space for a specific dialogue “between the kind of Western understanding of human rights which is where [many in civil society have] come from [and] local, traditional culture” and understandings of rights and responsibilities. In doing so, “our [Constitutional] rights [can] be brought to a human scale, as interpersonal values, not just simply as juridical concepts.” DM