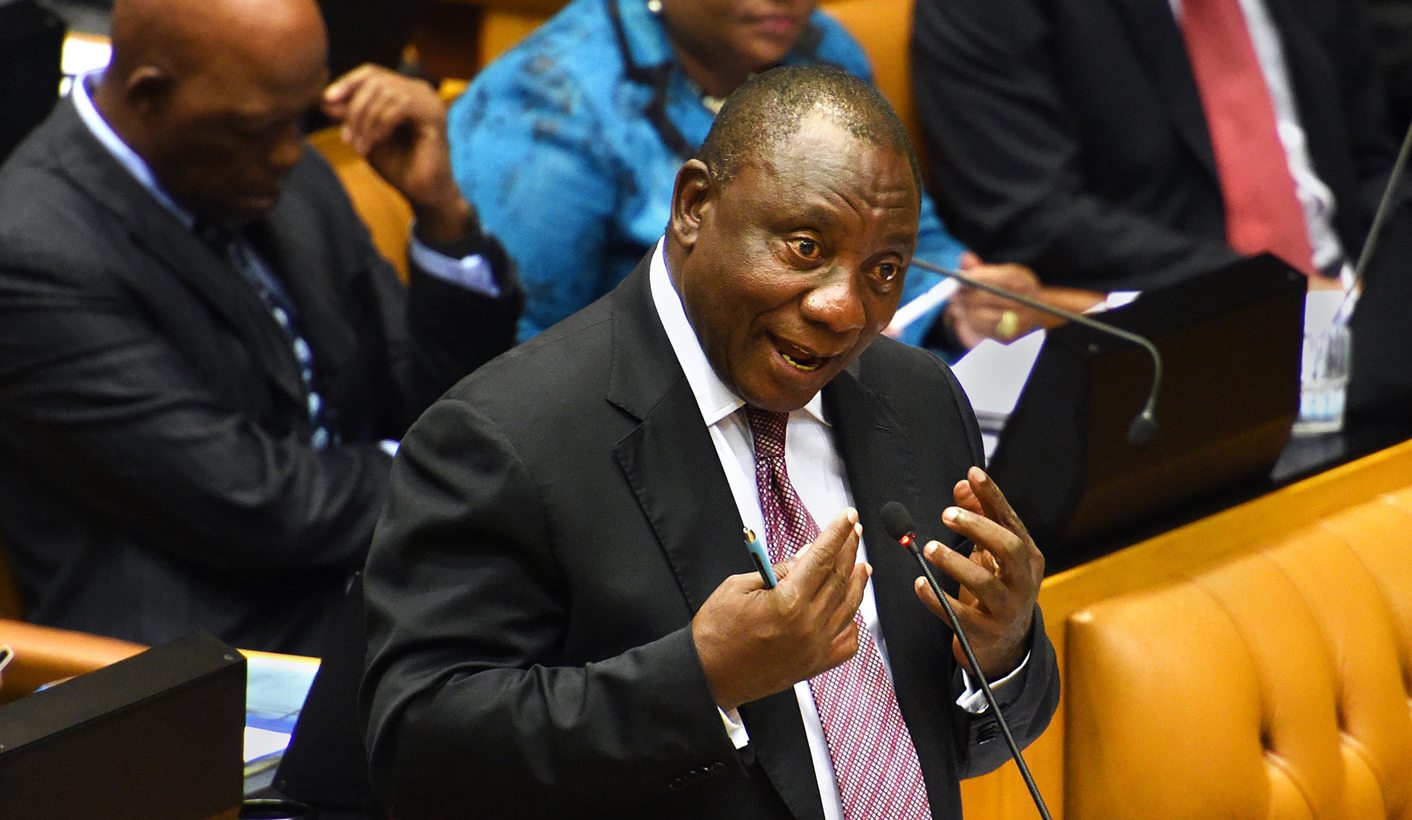 Deputy President Cyril Ramaphosa just happens to be South Africa’s special envoy to Sudan. He also happened to be answering questions in the National Council of Provinces (NCOP) on Wednesday afternoon. With the mist still swirling around the South African government’s failure to arrest Sudanese leader Omar al-Bashir, Ramaphosa must have known he’d never get away without a question about al-Bashir from the opposition. The opposition must have known they’d never get away with an answer. By REBECCA DAVIS.

“One of the most irritating phenomena of our political life is the manner in which politicians wrongly invoke the so-called sub judice rule to avoid accountability,” law professor and Daily Maverick contributor Pierre de Vos wrote in 2011. “Because they do not want to answer difficult questions or deal with politically awkward issues, such politicians invoke a rule that only exists in their imagination.”

On Wednesday, the circumstances surrounding Sudanese President Omar al-Bashir’s departure from South Africa became the latest issue to have that convenient sub judice label slapped on it.

It was DA NCOP member Jacques Julius who broached the question. “Why did the government allow President al-Bashir to leave South Africa when there’s an international warrant for his arrest?” Julius asked. “And what steps will the honourable deputy president, as special envoy to south Sudan, [take to] ensure that those in contempt of the South African High Court order will be held accountable?”

Amidst vocal protests from the ANC delegates present, NCOP Chair Thandi Modise moved swiftly to block this line of inquiry.

Backing up an ANC MP who termed the matter “sub judice”, Modise said: “The matter of the AU convening its business in South Africa, the attendance of al-Bashir, is in court. The courts have ordered an investigation, that investigation must first be finished before we can get the deputy president to give us a response which might tell us exactly what happened.”

It’s the latest in a string of sticky issues that parliamentary officials have ruled cannot be discussed because they are sub judice. Over the course of some years, “sub judice” has become the magic bullet to shut down debate on difficult topics.

In March, following the furore over signal-jamming at the State of the Nation address, Deputy President Ramaphosa said he couldn’t take a question on the matter in the National Assembly because it was sub judice. In the same session, State Security Minister David Mahlobo said that he couldn’t discuss the use of signal jamming devices either, for the same reason.

Sub judice is the signal-jammer of parliamentary discourse.

November 2014: the EFF’s parliamentary caucus protests against Ramaphosa’s reference to disciplinary proceedings against EFF MPs after the #PayBackTheMoney session, arguing that the disciplinary process was sub judice. February 2015: the EFF demands that Justice Minister Michael Masutha stop talking about the use of police in the National Assembly because it is sub judice. NCOP deputy chair Raseriti Tau agrees.

That same month, Police Minister Nathi Nhleko responded to a parliamentary question from the DA about corruption charges laid against Zuma over the Nkandla security upgrades. His answer? Sub judice.

In August 2014, when Communications Minister Faith Muthambi was asked about the appointment of Hlaudi Motsoeneng as COO of the SABC despite his fraudulent qualifications, Muthambi said she couldn’t discuss it because it was sub judice.

Two years previously, members of Parliament’s police committee were told they couldn’t ask any questions about the Marikana massacre because – you guessed it! – sub judice.

As far back as 2004, then Deputy President Jacob Zuma was able to avoid parliamentary questions about the arms deal because Speaker Baleka Mbete ruled that they contravened the sub judice rule.

These are just a few of the occasions on which the sub judice rule has been invoked in South Africa’s Parliament over the past few years. The South African National Editors’ Forum (Sanef) expressed concern over the use of the rule in a meeting with parliamentary officials in March this year.

DA shadow communications minister Gavin Davis pointed out in August 2014 that there should be a difference between MPs discussing a matter still being considered by the courts (okay), and trying to predetermine the matter’s outcome (not okay).

There’s little doubt that Parliament badly needs some clarity from legal experts as to when – if at all – the sub judice rule may be applied to muzzle discussion.

“The sub judice rule will almost never be applicable,” De Vos wrote in 2011. “Where anyone invokes this rule, they are doing so either because they are ill-informed about the law or because they are using the rule to avoid accountability.” DM