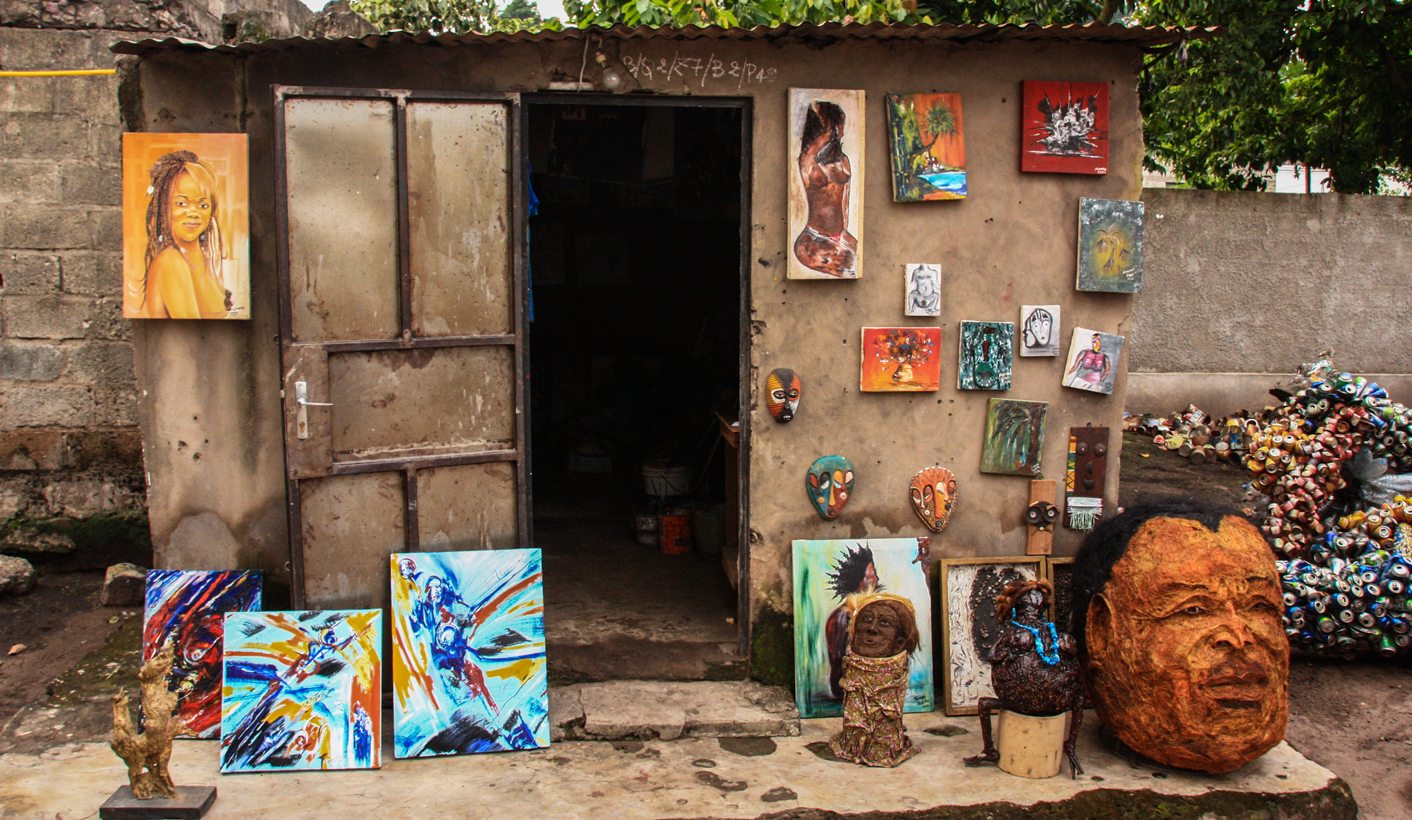 Search for the Republic of Congo – otherwise known as Congo-Brazzaville – on internet, and you won’t find much. The smaller of the two Congos, and its capital Brazzaville, continue to live in the shadow of their torrid history of civil war, and the bigger and more (in)famous Kinshasa and Democratic Republic of Congo, just on the other side of the mighty Congo River. By CHRISTOPHER CLARK.

Many people remain unaware that there are even two Congos to begin with.

This is perhaps not surprising when you consider the size difference between the Congo siblings. The entire population of Republic of Congo is less than half of the city of Kinshasa’s alone.

Furthermore, freedom of expression is extremely and sometimes violently restricted in Brazzaville and the Republic of Congo; almost all of the country’s print and broadcast media is essentially state-sponsored. So it is that either accessing or producing accurate information about the country tends to be a rather difficult task.

But an engaged and growing community of young artists and activists are defying the numerous obstacles that confront them, united in their belief that art and the youth can bring about change for a broken Brazzaville and Congo, and determined to finally help their country step into the light, whatever it takes.

Photo: the canopy of parasols that covers the Marché Total, Brazzaville’s biggest and busiest market.

One of the figures at the forefront of this youthful movement is Martial Pannucci, a young local political activist, literature student, poet and hip-hop artist. Martial’s group is called 2 Mondes, two worlds. According to Martial, both his group’s name and his lyrics speak of the environment in which he lives, where the opulence of the powerful Congolese elite and the grandeur of colonial monuments stand in stark contrast to the visible scars of the civil war that ravaged the city in the 90s, and the everyday lived realities of most Congolese citizens.

Take a walk around Brazzaville and it is easy to see what Pannucci means. Palatial residences and expensive new construction projects intersperse the crumbling shells of buildings bombed during the war. Some of these ruined buildings have been largely reclaimed by the dense vegetation around them. Many of them are still inhabited.

Pannucci says that Congo is a country “rich in talent”, but that aside from the issues around freedom of expression there also aren’t the right policies or adequate support for promotion and development of the arts. “An artist will put on a concert and then have to walk home, he’ll put on an exhibition of his paintings but will sell nothing – it doesn’t work. Music, the arts, have to develop and artists have to be able to make a living from their art. Even if someone is a well-known artist, they are not respected.”

The country’s current priorities are made apparent by the state architecture along Brazzaville’s main avenue. The president’s enormous residence and a number of imposing new government buildings dwarf the small and dilapidated Ministry of Culture and the city’s only “official” museum a little further down the road.

Photo: Street art on the walls of one of the city’s cultural centres.

The other half of 2 Mondes goes by the name of Ya Vé. Since he and Pannucci appeared in a BBC dispatch denouncing the despotic Congolese government, Ya Vé has practically been living in hiding, bouncing around between a number of friends’ houses. He says he is worried for the safety of his family and he rarely goes anywhere on his own these days. His career choice has also cost him his girlfriend, who couldn’t deal with constantly worrying about his and their safety. “But I have to keep on fighting,” he says. “Our music, our art, is very important . . . it is the strongest weapon that I have to move mountains, to improve lives through words . . . Because after religion, science and politics, it’s time that artists have their say in what is built.”

Ya Ve’s sentiments are echoed, to some extent at least, by Baudouin Mouanda , a 34-year-old world-renowned Congolese photographer and one of the founders of Generation Elili, an energetic local photography collective who have taken it upon themselves to appropriate and reimagine the way that Brazzaville and Congo are presented to the world through images.

It’s a tough task in a country where most officials (and even many members of the general public for that matter) are instantly suspicious of photographers, and where stories of these said same officials confiscating or breaking cameras, cutting up memory cards and even arresting photographers are commonplace.

But the state’s dislike or even outright fear of photography perhaps speaks of the power that this medium can have in a repressed country like Congo. Mouanda sums it up neatly as follows: “This domain allows us to say that which we can’t say… it has the power to denounce certain things, but to do so in a way that is beautiful at the same time.”

Another factor that unites Mouanda with Pannucci, Ya Vé and other young artists is the sense of responsibility he feels to help build Congo’s future rather than joining the mass Congolese exodus to other countries, including France and South Africa.

Mouanda has been lucky enough to travel the world with his work and he studied in France, but he will always come back to Congo, he says. His travels allow him to import what he has learned and seen and share it with others. “That’s how we can advance together,” he says. “It’s us artists, the youth and the new generation that have to change things in this country.”

The next 18 months are undoubtedly going to be a crucial period for Congo. Following the annual Pan African Music Festival that comes to Brazzaville every July, in September the city will play host to the All African Games on the 50th anniversary of the event.

Two impressive new stadiums are currently being built in anticipation of the games, both of which will complement the gleaming new Maya Maya airport that was unveiled in 2013. The goal seems clear and strangely in keeping with the core aim of many of Brazzaville’s young artists: to get the rest of Africa and the world to pay more attention to Brazzaville.

Photo: A couple of dapper Congolese gents on their way to church.

But some Congolese claim that the games are a mere publicity stunt to deflect attention from the state’s intentions to change the country’s current constitution and allow aging President Denis Sassou-N’guesso to run for a 3rd term in the forthcoming 2016 elections (Sassou-N’guesso has in fact been in power for most of the last 35 years), a potential move that has been strongly contested by many Congolese.

There are also fears that the games will see the Congolese public take their grievances to the streets en masse and that this, in turn, will be met by a violent response from the state.

A few warning shots have already been fired. Most recently, on 5 June thousands of angry Congolese students rioted in three of the country’s biggest cities following a decision by the government to cancel baccalaureate exams after the questions were leaked online. Protesting students in Brazzaville, Point Noire and Dolisie pelted police with stones and attacked property while security forces fired tear gas to disperse them. Some students have claimed that police also fired live rounds.

Photo: A grand new residence being built in a crumbling corner of the city.

Speaking to many of the youth and young artists in Brazzaville about the country’s murky short-term political future, the significant contribution of a youthful citizen movement led by artists and musicians towards the toppling of Burkina Faso’s former president remains fresh in their minds, as does a similar movement led by young rappers in Senegal.

These movements are also evoked by Tresor Nzila, Director of local NGO Congolese Observatory for Human Rights (OCDH). According to Nzila, music and the arts “could be a determining factor in bringing about greater awareness among Congolese citizens: awareness of their role as a citizenry, awareness of their responsibility to effectively bring about change”.

As Pannucci says, “dictators are nourished by the silence of the people,” and it seems that the engaged young artists of Brazzaville aren’t going to stop making a noise any time soon. It’s time more of us started listening. Congo has known enough suffering. There are so many other emerging narratives that deserve more airtime. DM

Main photo: A collection of colurful artworks displayed in a local resident’s courtyard.

All photos by Christopher Clarke.