The Gathering 2015: Transforming the media, in so many...

The Gathering 2015: Transforming the media, in so many ways 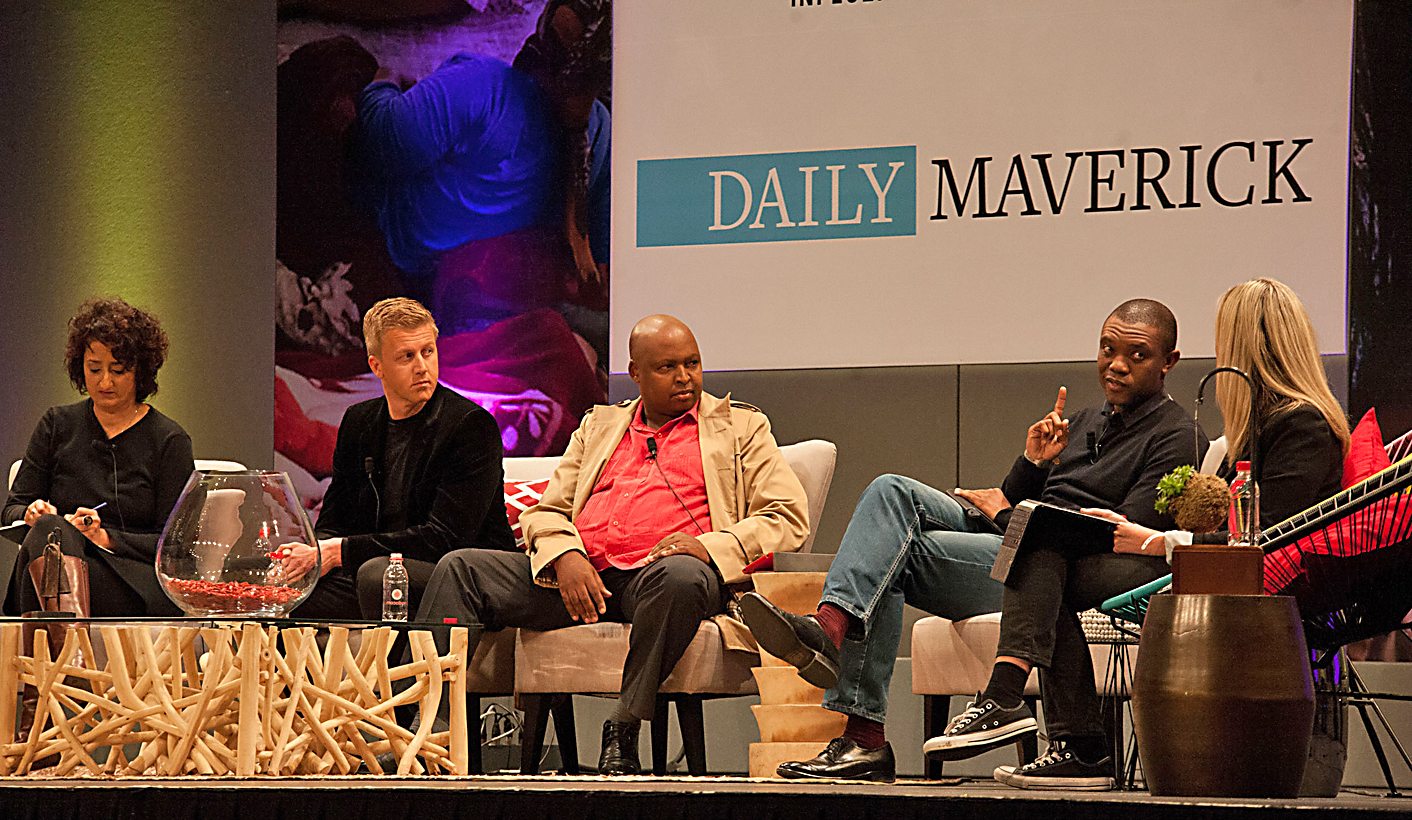 The essence of transforming the media in 21st Century South Africa is complex as technology and the Internet enables anyone with access to report and comment freely on almost any issue. Points raised during a discussion on the media at the Daily Maverick’s The Gathering 2015 in Johannesburg included that newspaper readership is steadily in decline; content is driven by the needs of consumers and not necessarily owners or editors; confusing media freedom with ownership and diversity is a mistake as is the assumption that the race or gender of an editor would automatically denote progressive impulses. By MARIANNE THAMM.

Of course the sleeping elephant in the cavernous Vodaworld where The Gathering took place last week – and particularly in relation to the panel discussion on media – is the current Film and Publications Board’s Draft Online Regulation Policy document aimed at censoring the Internet in South Africa.

According to the document – gazetted in March this year – the FPB would like to have broadly-defined powers to monitor everything on the Internet, including social media platforms such as Facebook and Twitter, personal blogs and websites.

Media advocacy group R2K has warned that the policy will “open the way for undue censorship of the internet under the guise of protecting the public from harmful content” and that key proposals are “out of touch with the realities of how we use the Internet, and possibly infringe on foundational constitutional provisions”.

In her Daily Maverick column last week, media analyst Julie Reid pointed out that the FPB “is out-of-sync with the current national conversation on media diversity and transformation. A widely mooted political argument is that the South African media, particularly the print sector, remain untransformed and offer too little scope for access to a broad range of opinions and ideas. Although the cost of data and widespread access to the Internet remains a challenge, the Internet nonetheless holds a democratising potential in this regard”.

Panellists at The Gathering were Lumko Mtimde, former CEO of the Media Development and Diversity Agency (and a defender of the ANC’s proposed Media Appeals Tribunal), Gareth Cliff, broadcaster and founder of CliffCentral.com, Songezo Zibi, editor of Business Day and Fatima Hassan, executive director of the Open Society Foundation for South Africa.

Mtimde said while the media environment in South Africa had changed with public, community and commercial services regulated by an independent regulator, “sadly little has transformed in the print media industry across the value chain from advertising to print and distribution”.

Media ownership, he added was “white dominated and concentrated” and representation on Sanef, the South African National Editors’ Forum, “was questionable”

“Our challenge is that we represent fairly our diversity. There is a hysterical tendency to cry that diversity is a threat to media freedom. Media transformation is not a threat to media freedom. Concentration is. We need a free and diverse media representative of diverse opinions. The right of the public to free media is indisputable. Media needs to be trusted and seen as credible by the public,” said Mtimde.

He said that three years after the release of the Press Freedom Commission, chaired by Justice Pius Langa, and which addressed a press commitment to self regulation, there was little evidence of its effect in the pages of newspapers. “If the new system worked we should see less sensation and more reporting. The protection of media freedom and regulation should happen post publication but will a system that affects bottom line ever ensure ethics are adhered to?”

Mtimde suggested that falling circulation figures for print were “due to a lack of credibility and relevance to readers” and added that “media must be as accountable as is required of everyone else in society”.

Gareth Cliff followed Mtimde’s presentation saying “he made such a lovely speech… for 1985, when printing and distribution were chief challenges for newspapers”.

Today the battle was between “everyone on earth” who had access to the Internet and that it was no longer the proviso of an editor to decide on the topic of conversation.

Addressing Mtimde, Cliff said “there are many things about your point of view that worry me. You seem to think that media freedom can be put into the same category as media ownership and diversity. If there were a censor in this room, who would choose him/her? Media freedom is the basis of every other right. We have to have freedom of expression first. There is no middle ground it must be absolute. If part of being grown up and living in free democratic country is being offended… so what?”

Various platforms for media should and must exist and anyone calling for censorship in the 21st Century would find themselves in a minority, said Cliff. “I don’t think there is a media worth making rules about anymore. This is the benefit of being free. The genie is out of the bottle and you will never get it back in.”

While newspapers were once “like Eskom, you had to get it” said Busines Day editor Songezo Zibi, journalism is in a state of flux with a business model that no longer worked.

In a world were news broke on Twitter or on radio platforms, “assumptions we knew 30 minutes ago change by the time we go to print”; so the question was, said Zibi, what do newspapers report on the following day “in an environment where you can only afford to employ so many or so few people. It’s archaic. It is a 20th Century framework”.

He said that while the print circulation of Business Day had plummeted to less than 30,000, the publication’s website had 750 000 unique users. The publication was doing now what it should have embarked on five years ago.

With regard to transformation, Zibi said the issue was still viewed through a political lens. “Transformation vehicles have changed and a process of irrelevance is taking place. The battle is for titles to make themselves relevant again in a manner that the consumer wants.”

He added that media transformation in South Africa is also viewed through a racial prism and asked “is a black homophobe as an editor ok? Where did we get this notion that being black gives you certain progressive impulses? How do we define progressiveness? The racial phenotype is not enough.”

This reductionistic approach, Zibi added, “is crude and shallow and we must stop doing it”.

“If you know anything about business, don’t go into newspapers,” said Zibi. Media, he said, was about content which is available on different platforms and the “obsession with print is unwarranted”.

“Media is, in all its forms, always a reflection of the society which forms it. The transformation that needs to happen in society – gender and class – needs to happen in the media as well. We cannot expect it to be an island to provide these things which society is not.”

OSF’s Fatima Hassan said that while consumers all wanted a free press “we don’t want to pay for it”. The threat to media freedom, she said, was evident in countries such as Zimbabwe and Swaziland where journalists were under surveillance or attacked and arrested. “We know what this was like and we do not want to go there again. We know what happens when you have Secrecy Act as a law, when you have media tribunals.”

The fight, she added, was not “with the ANC” as globally journalists were under attack, including in the US.

“But what is unique to South Africa is that something happened 12 or 18 months ago when Alide Dasnois, the editor of the Cape Times, was fired. It was clear to everyone why that happened. Don’t talk of transformation as a ruse. That shift forced people to think. Journalists have been pushed out of newsrooms and everyone is quietly accepting of this. We are not challenging those in power,” said Hassan

She said several things had happened around the dismissal of Dasnois. “We saw the politicisation of the media coupled with the commercial under the guise of transformation, the demanding of editorial content and the introduction of self censorship,” Hassan said.

The challenge in the 21st Century was how to make digital media sustainable as the cost of the Internet and data was too high in South Africa.

However, transformation of the media in South Africa, she added, “is not about race and gender but about stories that reflect true stories of South Africa.”

“The only way we can do it is through a free and independent media not beholden. We need strong, young black investigative journalists. In 20 years time you might not know about Nkandla or the Arms Deal.”

Which brings us back to the FBP proposals. This weekend at the Menell Media Exchange 2015 in Johannesburg and which explored the future of journalism in South Africa the OSF suggested that the Film and Publications Board proposal on Internet censorship “makes North Korea look liberal”. DM