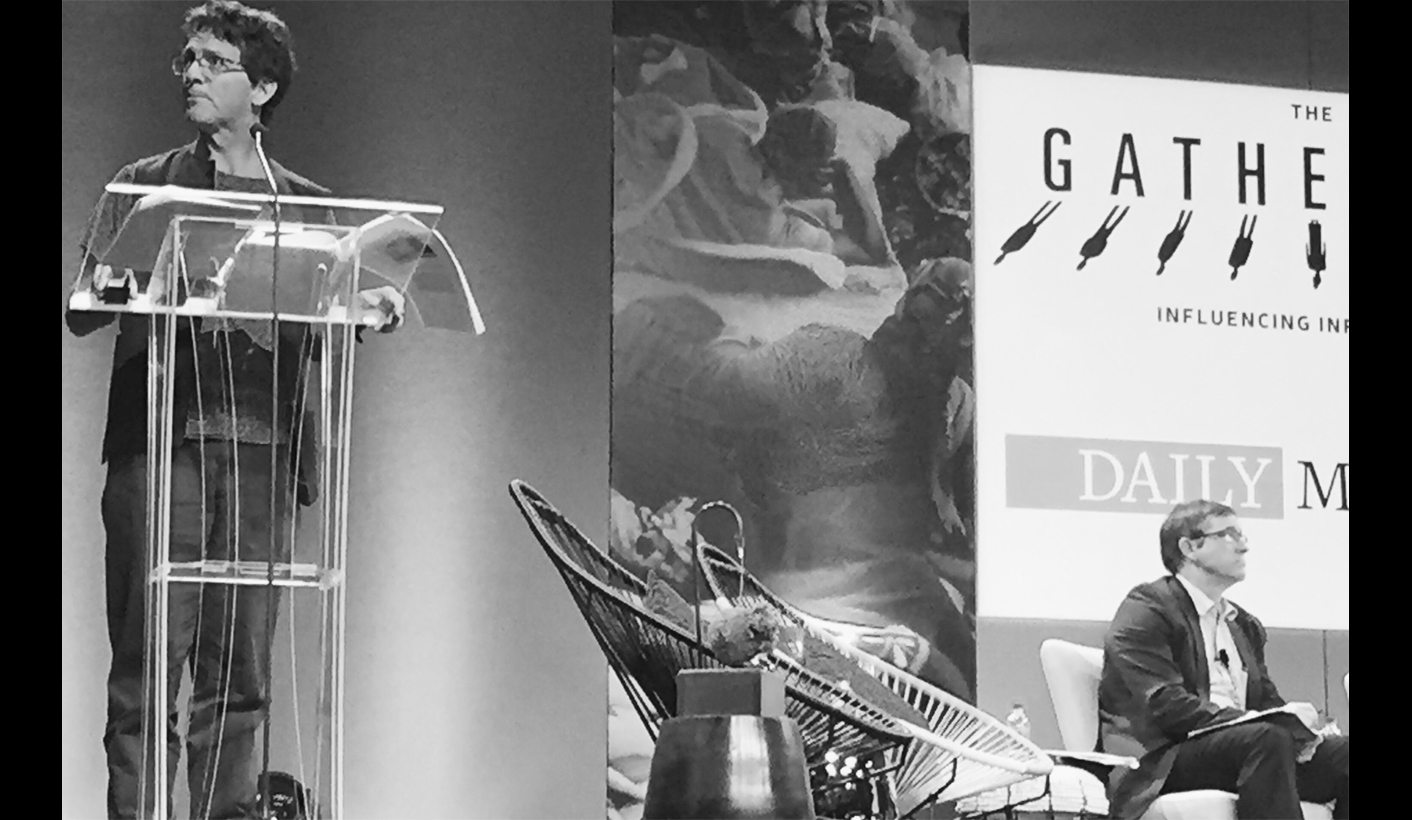 Deputy Minister of Justice and Constitutional Development John Jeffery was given a grilling at the Daily Maverick's 2015 edition of The Gathering. Facing a panel of activists, he had to defend the state's role and found himself under attack, and almost swamped by the sheer scale of the problems listed by his fellow panelists. By GREG NICOLSON.

Deputy Minister of Justice and Constitutional Development John Jeffrey knew it was going to be a difficult session. He was the only government representative on a panel with Section27’s executive director Mark Heywood, Socio-Economic Rights Institute (Seri) attorney Nomzamo Zondo, and Equal Education Gauteng c0-director, Tshepo Motsepe, discussing issues of social justice.

Jeffery’s key points were that civil society and government should engage more on issues of concern and that NGOs should not rush to court. “There’s a lot of programmes from government. There’s also a lot of fora that have been created for members of communities to engage with government,” said Jeffery, noting state successes such as no-fee schools and the provision of anti-retroviral medication.

“None of us is blind to the implementation gap,” he acknowledged. “But if NGOs spend their whole time bringing court cases against government, their money is wasted.” Jeffrey noted an example of civil society and the media getting it wrong, condemning government and misinterpreting the situation.

It was the spark Heywood, Zondo and Motsepe needed to start a critical and moving discussion, criticising Jeffrey and the state’s response to social justice issues. “Yes this government has done a great deal to improve access to basic rights such as healthcare services, education, but the critical questions we are asking now is about the quality of access,” said Heywood. “We talk about the poor as if they are statistics, not as if there are parents still suffering,” he added as graphics on the screen highlighted the case of Michael Komape, the six-year-old boy who died in a Limpopo school’s pit toilet last year.

“We use the courts because the courts are currently the only arm of government that is willing to listen to the poor,” said Motsepe, who added the courts don’t feature government’s arrogance. “Allow us to congratulate what you do well and allow us to criticise what you don’t do well.” Jeffrey scribbled in his notepad while the speakers regularly addressed him.

The list of things the state is not doing well was long. Education is failing, said Motsepe. Children are dying, said Heywood. Children are being arrested and detained in protests, said Zondo, citing an example from Tembelihle.

“When you think of social justice whose voice do you hear?” Zondo asked. “You can see from the beginning poor people are invisible. People don’t see them. People don’t hear them.” When poor people do demonstrate, everyone looks for a third force, and then seeks to remove them, like evicting tenants from buildings. Zuma is guilty, she said as an example, of failing to recognise the dignity of the relatives of those who were killed in Marikana because he has withheld the Farlam Commission’s report. (Zondo has worked extensively with the families of the miners murdered in Marikana.)

After the civil society leaders spoke, the deputy minister had a chance to respond. He clarified that he didn’t say we should only celebrate government and didn’t say NGOs must not take the state to court, but that they should recognise government’s successes and only go to court after engagement fails. Judging by the reaction, the minister failed to convince the crowd, making it worse by clarifying his criticism of the Public Protector. He said he just wanted her to fulfil her mandate, which, of course, has different interpretations.

In response to Jeffery’s comments about going to court, Heywood said Section27 wrote around 50 letters to the Limpopo department of education before going to court on the issue of textbooks. “We’re just trying to defend our rights and we’re getting hit. We shouldn’t be getting hit for defending our rights,” he said. He said Section27 battles for justice are led by individuals and communities coming to them with concerns, not the other way round.

Jeffery was in a difficult position. He was faced with civil society representatives who know their stuff – on health, justice and education – while he doesn’t speak for the ministers of health or education. He tried to mount a defence, and told the crowd he was available through phone or email to respond to any concerns. But in the end, Motsepe, Zondo and Heywood listed so many serious problems in South Africa, so many serious concerns that cannot be ignored.

“Let’s not look at whether the glass is half full or half empty, it’s a glass with a certain amount of water in it,” was all Jeffery had to say in the end. While he was hammered, Heywood called for a new type of “political citizenry” that can demand its rights outside of elections. DM